Accessibility links
Therapists Explore Dropping Solo Practices To Join Groups : Shots - Health News In the past, many psychotherapists ran their own little businesses. But changes in health care coverage mean that many must start accepting insurance and doing paperwork. That's leading some therapists to form group practices or join large medical groups — and may lead to better care for patients. 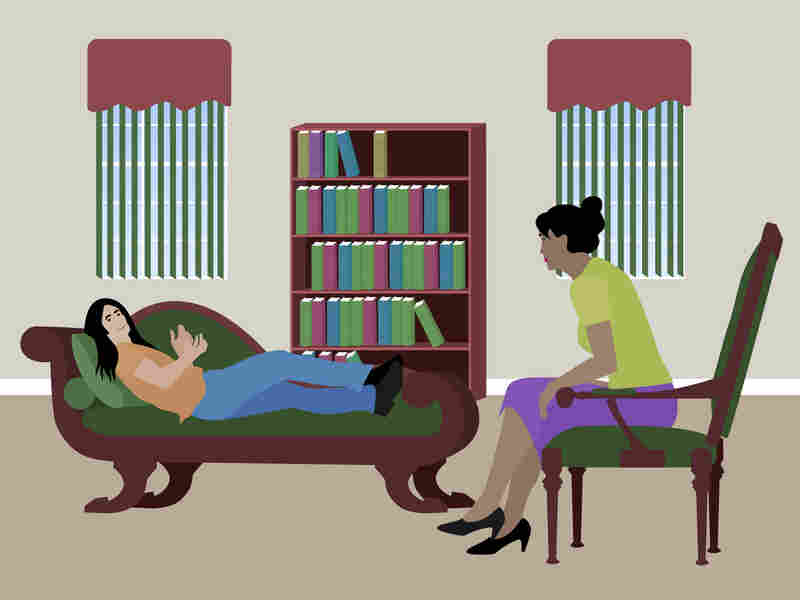 The goals of therapy remain the same, but the business side is undergoing big changes. iStockphoto.com hide caption

In the corporate world of American health care, psychologists and other mental health therapists are still mostly mom-and-pop shops. They build their own solo practices, not unlike Lucy in the Peanuts comic strip gang who hung her own shingle: "Psychiatric Help, 5 [Cents] — The Doctor Is In."

But the business model for therapists is shifting away from solo practices and toward large medical groups, say mental health experts. That change is propelled by the Affordable Care Act, which mandates mental health benefits in insurance coverage, and by the Mental Health Parity Law, which requires private and public insurers to cover mental health needs at the same level as medical conditions — by charging similar copays, for example.

"It's a big change for us," says Barbara Griswold, a marriage and family therapist in San Jose, Calif. "I spent all of my life setting up this practice where I choose my clients, I choose my hours."

Griswold says that in just the last few months she has considered a new contract with a giant health insurance company, warned other therapists to watch what they're signing in payment negotiations, and considered closing her solo practice.

"The idea of me moving into an interdisciplinary practice where somebody else is taking care of my billing and someone is choosing my clients for me — there is a loss of autonomy that a lot of therapists are frightened about," she says.

Organizations that advocate for mental and behavioral health — groups that long complained that they were treated as second-class providers — have applauded the federal laws. But inclusion has come with some unhappy caveats, including less pay and more paperwork.

Patients used to paying $150 in cash for a therapy session will, with some limitations, have sessions covered by their health plan. "Some people have paid for mental health out of pocket because they didn't have mental health insurance," says Katherine Nordal, executive director for professional practice at the American Psychological Association. "I think now they'll expect their providers to accept insurance."

That means many therapists will have to figure out innumerable insurance plans and byzantine billing codes for the first time.

"A lot of people come to me and they're almost falling apart," says Griswold, who wrote a book called Navigating the Insurance Maze: The Therapist's Complete Guide to Working With Insurance — and Whether You Should. "It's almost like a therapy session with these therapists. Seriously! I had a woman cry on my couch. She was like, 'I don't know how to do this!' "

Therapists who already accept insurance typically make less per session, since fees are about half of what they charge for cash visits. Blue Shield of California, for example, recently asked Griswold to accept a 10 to 30 percent discount off her already discounted rate for patients who will buy health plans through the new insurance marketplace. She said no, and then wrote about the negotiations in her popular newsletter. "I put in my newsletter, 'Do you even know what you signed?' And people wrote back, 'Oh my God, I had no idea!' "

It's almost like a therapy session with these therapists. Seriously! I had a woman cry on my couch. She was like, 'I don't know how to do this!'

In many ways, therapists are encountering what medical doctors have complained about for years: the confusing, confounding and, some might say, hostile insurance bureaucracy that providers must tangle with in order to get paid. Therapists are expected to invest in expensive electronic billing software and electronic health records and comply with a tome of regulations.

"Just keeping up with all of that, quite frankly, is exhausting," says Erica Savino Moffatt, a psychiatric nurse practitioner in Boston. That's a far cry from the solo practice model, where therapists often worked from home. "It used to be the benefit was a better work-life balance, control over your immediate work environment," Savino Moffatt says. "But a lot of that is lost in trying to track all of these logistics."

The increasing complexity of running a practice has meant more therapists are taking down their shingles or forming groups with other therapists to share the burden, executives at national mental health groups say. Others have joined large medical groups that offer mental health services as part of comprehensive care.

Savino Moffatt is a newly minted graduate who works as a psychiatric nurse practitioner at a large clinic in Boston that is well positioned for the era of integrated medicine. She works with internists and pediatricians who previously didn't know where to turn to for help with their patients. Now Savino Moffatt is just down the hall. "You say, 'Hey, I'm here! I do psychiatry.' And they kind of look at you like, 'Oh thank goodness! I have a patient and I'm so worried!' "

Savino Moffit says she can identify mental health conditions like depression that might be masquerading as physical symptoms. That allows physicians to better serve their patients, she says, and it can save the clinic from ordering costly and unnecessary tests — an important consideration for large medical groups that receive a set amount of money each month to cover all the needs of their patients.

Mental health experts say setting up these new business models will take time; it's a marathon, not a sprint. Barbara Griswold, sitting in her therapist's chair at her office in San Jose, says that's about the right speed.

"I tend to think therapists overreact about change," she says. "We're not really good with change, which is funny because we help people with change."