Accessibility links
FDA Seeks To Tighten Controls On Hydrocodone Painkillers : Shots - Health News The painkiller OxyContin is already classified as a Schedule II drug because of the "severe" risk of addiction. Now the Food and Drug Administration wants to move Vicodin and other painkillers containing hydrocodone to Schedule II as well, citing soaring rates of addiction and overdose deaths. 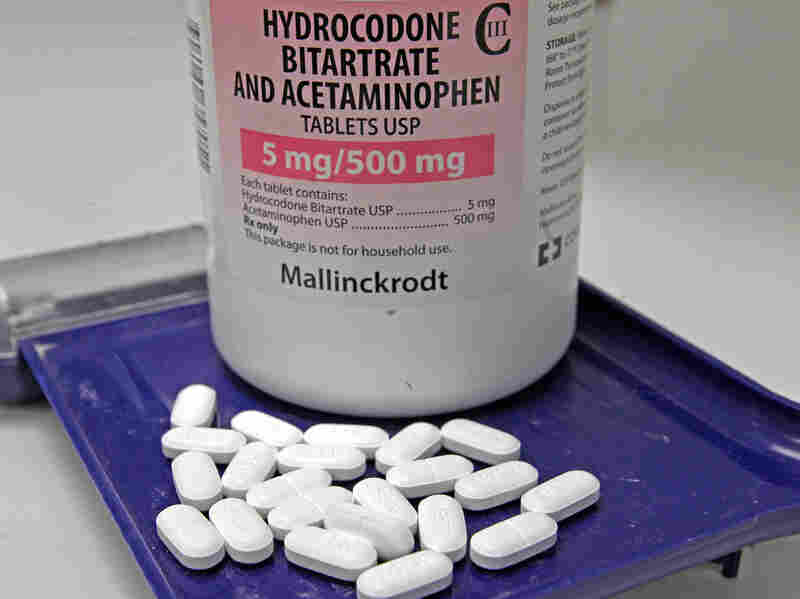 Hydrocodone, sold as Vicodin and other brand names, may face tighter restrictions on prescribing and use. Toby Talbot/AP hide caption

The Food and Drug Administration Thursday announced that it wants the federal government to impose tough new restrictions on some of the most widely used prescription painkillers.

The FDA said it planned to recommend that Vicodin and other prescription painkillers containing the powerful opioid hydrocodone be reclassified from a "Schedule III" drug to a "Schedule II" drug, which would impose new restrictions on how they are prescribed and used.

OxyContin, another opioid painkiller, is already a Schedule II drug, defined by the Drug Enforcement Administration as "potentially leading to severe psychological or physical dependence".

In a statement posted on its website, the agency said it was taking the step after becoming "increasingly concerned about the abuse and misuse of opioid products, which have sadly reached epidemic proportions in certain parts of the United States."

The DEA has been asking the agency to recommend reclassifying the drugs for years, citing soaring numbers of Americans becoming addicted to the drugs and dying from overdoses.

Pain specialists and their patients, however, have been fighting the move, saying that any new restrictions would make it too difficult for those suffering from chronic, debilitating pain to get the drugs they need to survive.

The agency acknowledged the emotional debate, saying it "has been challenged with determining how to balance the need to ensure continued access to those patients who rely on continuous pain relief while addressing the ongoing concerns about abuse and misuse."

Among other things, reclassifying the drugs would reduce the number of refills patients could get before having to go back to see their doctor. Doctors would not be able to simply call prescriptions into pharmacies.

The FDA said it would submit its recommendation to the Health and Human Services Department by early December, and anticipated that the National Institute on Drug Abuse would concur with the recommendation. That will begin a process that would lead to a final decision by the DEA.

More than 136 million prescriptions for these products are dispensed every year, making them the most widely used prescription drugs in the country. Vicodin is probably the best-known hydrocodone-containing product, but there are many others, sold under brand names such as Lortab and Norco.

While powerful painkillers, opioids are highly addictive and are abused by millions. The number of Americans overdosing from these drugs has been increasing rapidly in recent years, and more than 15,000 now die every year, according to the Centers for Disease Control and Prevention.

Across America, The Grip of Prescription Painkillers Tightens

But about 100 million Americans suffer from chronic pain, and many of them and their doctors fear the change would make it difficult, if not impossible, for these patients to get drugs they need.

The move comes after an FDA advisory panel recommended the change in January.

Advocates for pain patients immediately reacted with concern to the announcement.

"The concern we have is that it may unintentionally make access for people with pain even more of a challenge than it is now," wrote Bob Twillman of the American Academy of Pain Management in an email to Shots. "This could necessitate millions more office visits, with attendant costs approaching a billion dollars a year. The access issues will need to be addressed or we will have a lot more people with a lot more uncontrolled pain."