Accessibility links
Pennsylvania Governor Talks Up Plan To Expand Medicaid His Way : Shots - Health News After initially declining federal funding to expand Medicaid, Gov. Tom Corbett has changed course slightly. He is pursuing an approach for Pennsylvania that would make use of federal funds, but there are some caveats. 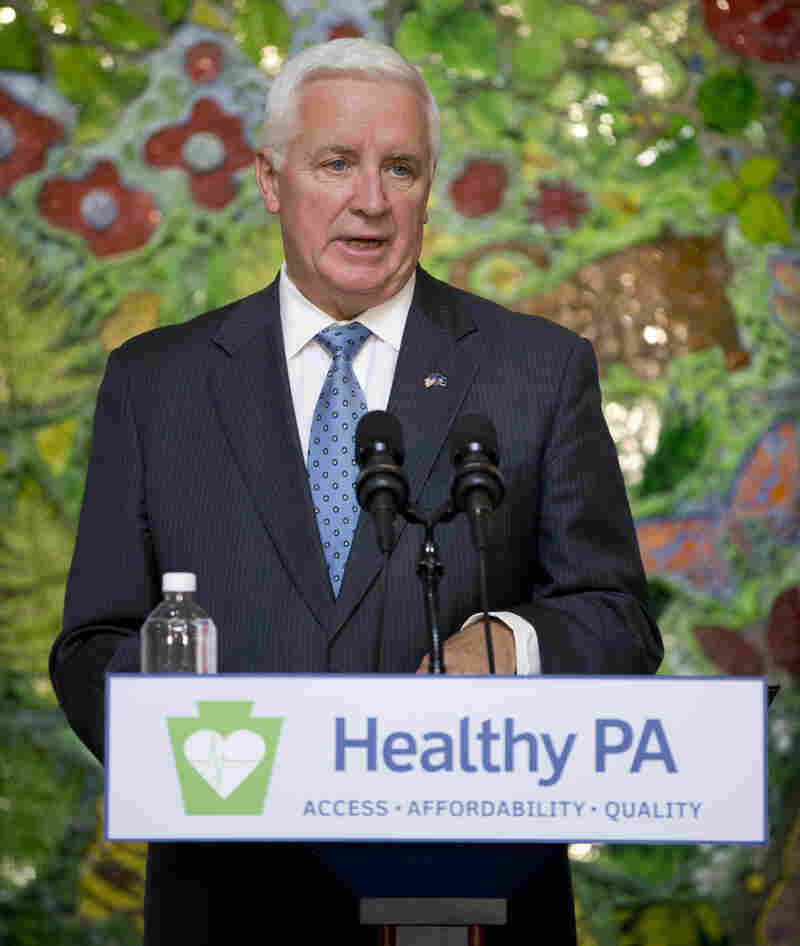 Pennsylvania Gov. Tom Corbett may have been watching fellow Republican Gov. John Kasich of Ohio who bypassed the Republican Legislature in his state this week to expand Medicaid.

As part of the Affordable Care Act, states have the option to make coverage available to low-income adults, with the federal government picking up the entire tab for the first three years.

Only about half the states so far have planned to do that, starting Jan. 1, and Pennsylvania has, so far, not been among them.

But Corbett is now canvassing the state touting his Healthy Pennsylvania plan, which calls for accepting the federal funding to expand Medicaid, with some caveats.

"We need [a] medical insurance program that's designed for Pennsylvania. One size does not fit all," Corbett said at St. Christopher's Hospital for Children in North Philadelphia recently.

Healthy Pennsylvania would direct newly eligible people, mostly low-income adults without children, into the health insurance exchange where they could buy private coverage. That's in contrast to how it works now, where the state puts Medicaid patients into private managed care plans and sets the rates for what doctors and hospitals are paid.

Corbett's idea is to use the federal expansion funds to subsidize people buying individual plans instead. "Most important, it's not putting 500,000 more people into an entitlement program," he said. "It's putting them in a program where they are invested in the program, they are invested in their health care, in a way where a person in Medicaid may not have that same personal investment," he said.

Last month, the federal government approved a plan by Arkansas that allows new Medicaid recipients to shop for coverage on the insurance exchange. The Arkansas decision shows that the feds are willing to let states be creative with the expanded program. Corbett's plan differs from Arkansas' though, so federal approval isn't guaranteed. He'd also change some current Medicaid benefits and include a job-training component.

"The governor is looking for a way to draw down the federal money," says Nicole Huberfeld, a professor of health law at the University of Kentucky. She's not surprised by Corbett's latest move. "The Legislature may or may not be on board, but the governor recognizes a lot of federal money to be had that will likely save the state a lot of money in the long run," she says.

A Medicaid Expansion In Pennsylvania May Take Time

When the Supreme Court gave the states the option last year to expand Medicaid, many Republicans didn't have an appetite to do it, no matter who paid the bill, according to Matt Baker, a Republican lawmaker in Pennsylvania. "The Democrats in Harrisburg, by and large, support a full-blown Medicaid expansion," he says. "The Republicans do not. And we're very, very concerned about the cost."

But Baker doesn't view Corbett's plan as an expansion because of the shared responsibility element, and it doesn't appear to be facing severe political backlash.

Democratic leaders worry Corbett is moving too slowly and say they want more details. But some advocates for a full expansion are cautiously optimistic, including Michael Race of Pennsylvania's Partnerships for Children. While he "would have preferred to see Medicaid expansion put on the table," he says he was hopeful early on a plan would surface.

The whole plan isn't a done deal, but the University of Kentucky's Huberfeld says one thing is clear: Federal officials at the Department of Health and Human Services have signaled from the outset that they're willing to work with states to give them maximum flexibility to expand Medicaid under their own terms.

This piece is part of a collaboration among NPR, WHYY and Kaiser Health News.