Accessibility links
Eeek, Snake! Your Brain Has A Special Corner Just For Them : Shots - Health News Humans and other primates have really good vision. One scientist thinks that ability evolved in part to help monkeys and humans quickly recognize venomous snakes. When monkeys see photos of snakes, neurons in a specific part of the brain light up. The neurons respond to photos of the reptiles more than to monkey faces. 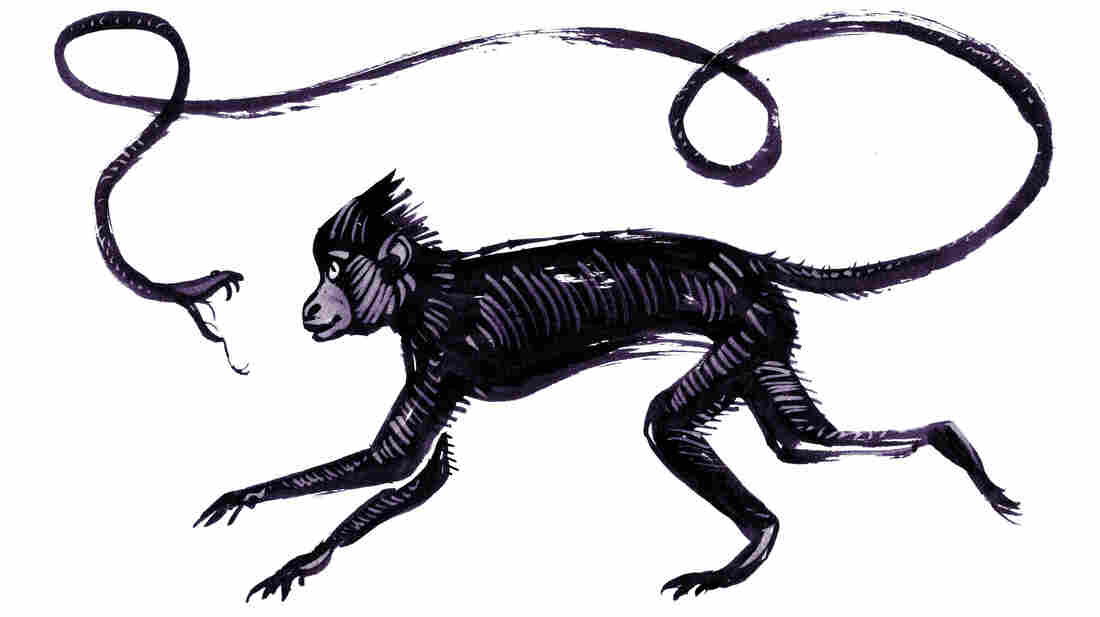 Anthropologist Lynne Isbell was running through a glade in central Kenya in 1992 when something suddenly caused her to freeze in her tracks. "I stopped just in front of a cobra," she says. "It was raised with its hood spread out."

Isbell, who is at the University of California, Davis, says she has spent the past couple of decades trying to understand how she could have reacted before her conscious brain even had a chance to think — cobra!

"At first I thought it was luck," she says. "But now I'm pretty sure that it's not luck. It's a reflection of 60 million years of evolutionary history working on my visual system."

The answer involves monkeys, the evolution of primate vision and a part of the brain called the pulvinar, which Isbell explains in Monday's Proceedings of the National Academy of Sciences.

In the years after her encounter with the cobra, Isbell developed a theory that snakes are a major reason that humans and other primates evolved really good vision.

"We have our forward-facing eyes," she says. "We have our excellent depth perception. We have very good visual acuity, the best in the mammalian world. We have color vision. So there has to be some sort of explanation for it."

Primates in parts of the world with lots of poisonous snakes evolved better vision than primates elsewhere, Isbell found out. It's no accident that lemurs in Madagascar have the worst vision in the primate world, she says. There are no venomous snakes.

But if the primate visual system really evolved to detect snakes, there should be some biological evidence of this in their brains, Isbell thought. So she teamed up with researchers in Japan to study the brains of two macaque monkeys that had probably never seen snakes.

The researchers measured the activity of individual brain cells while showing the monkeys images of snakes, faces, hands and simple geometric shapes. And the researchers found something remarkable in the pulvinar, a part of the brain's visual system that's unique to people, apes and monkeys.

"There are neurons that are very sensitive to snake images and much more sensitive to them than the faces of primates," Isbell says of that brain region. That's surprising, she says, because monkeys and other primates have brains that are highly sensitive to faces.

The finding appears to explain Isbell's experience in Kenya so long ago, when she stopped herself before she even realized she was seeing a cobra. "This part of the visual system appears to be the sort of quicker, automatic visual system that allows us to respond without even being consciously aware of the object that we are responding to," she says.

The finding was not a complete surprise to other researchers who study primates' fear of snakes. "There have been a lot of people suspecting that there must be something like this going on," says Sue Mineka, a clinical psychology professor at Northwestern University.

The new study appears to explain Mineka's own research showing that even monkeys raised in labs where there are no snakes can quickly learn to fear the reptiles. But it's still unclear whether the brain response of the monkeys in this study showed they were truly afraid of snakes or just had an innate ability to recognize the potentially venomous reptiles.

What Isbell's study does suggest is that both monkeys and humans have evolved brains that are well prepared to learn to fear snakes, Mineka says. "It's identifying a possible mechanism because there is a distinct neural signature that could then be associated with threat."