Accessibility links
Violence, Chaos Let Polio Creep Back Into Syria And Horn Of Africa : Shots - Health News The number of polio cases globally sank to an all-time low in 2012. But outbreaks in Syria and Somalia this year are jeopardizing efforts to eradicate the virus. A recent visit to the Somali-Ethiopian border highlights just how easily polio can regain a foothold in rural, insecure communities. 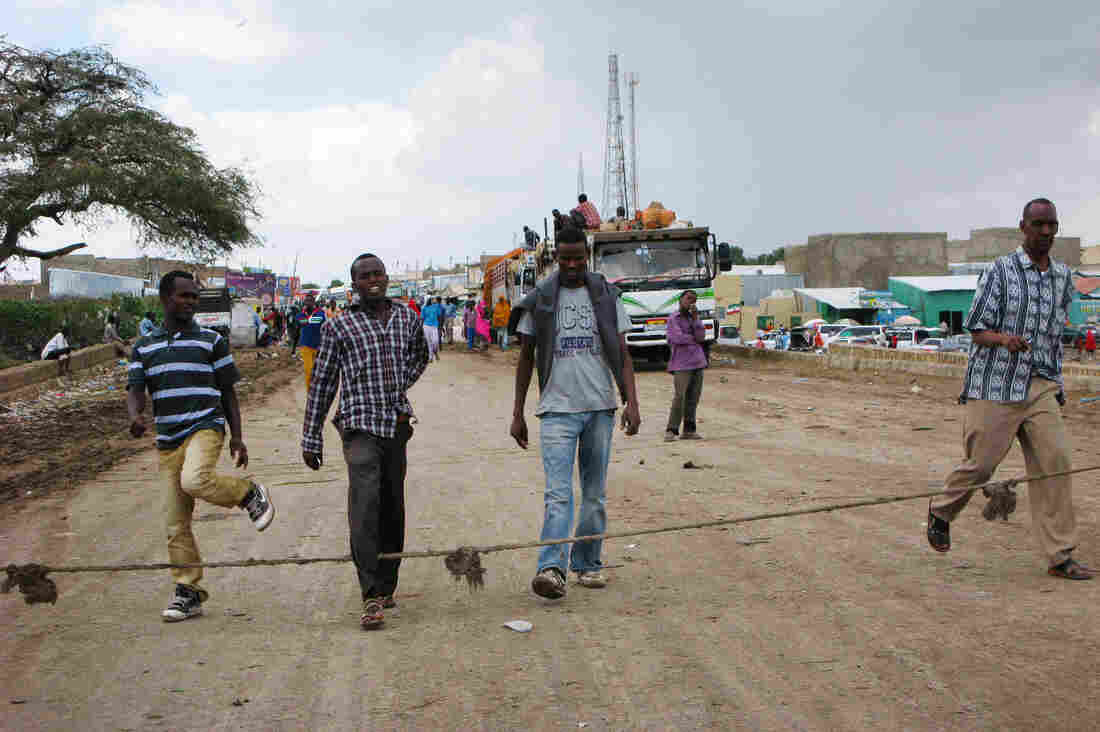 In the border town of Wajaale, Ethiopia, a frayed, knotted rope marks the international boundary with Somalia. The rope is ignored by just about everyone. Jason Beaubien/NPR hide caption

A spokesman for the World Health Organization said Thursday that it was mistaken about the polio outbreak in Somalia spreading to South Sudan. The virus has been detected in Kenya and Ethiopia this year. But South Sudan has not recorded a polio case since 2009. 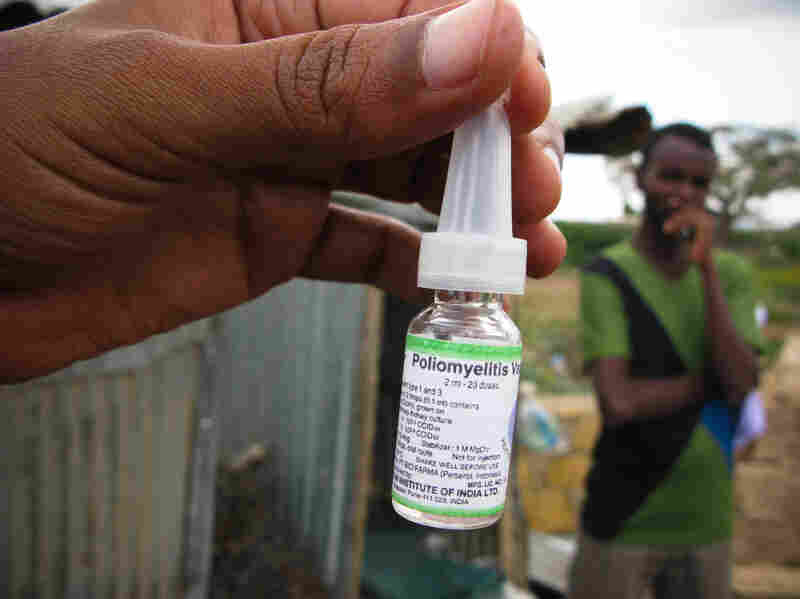 Earlier this year, Ethiopia carried out five mass immunization campaigns against polio along the Somali border. But to be fully protected, kids need several doses of the oral vaccine. Jason Beaubien/NPR hide caption 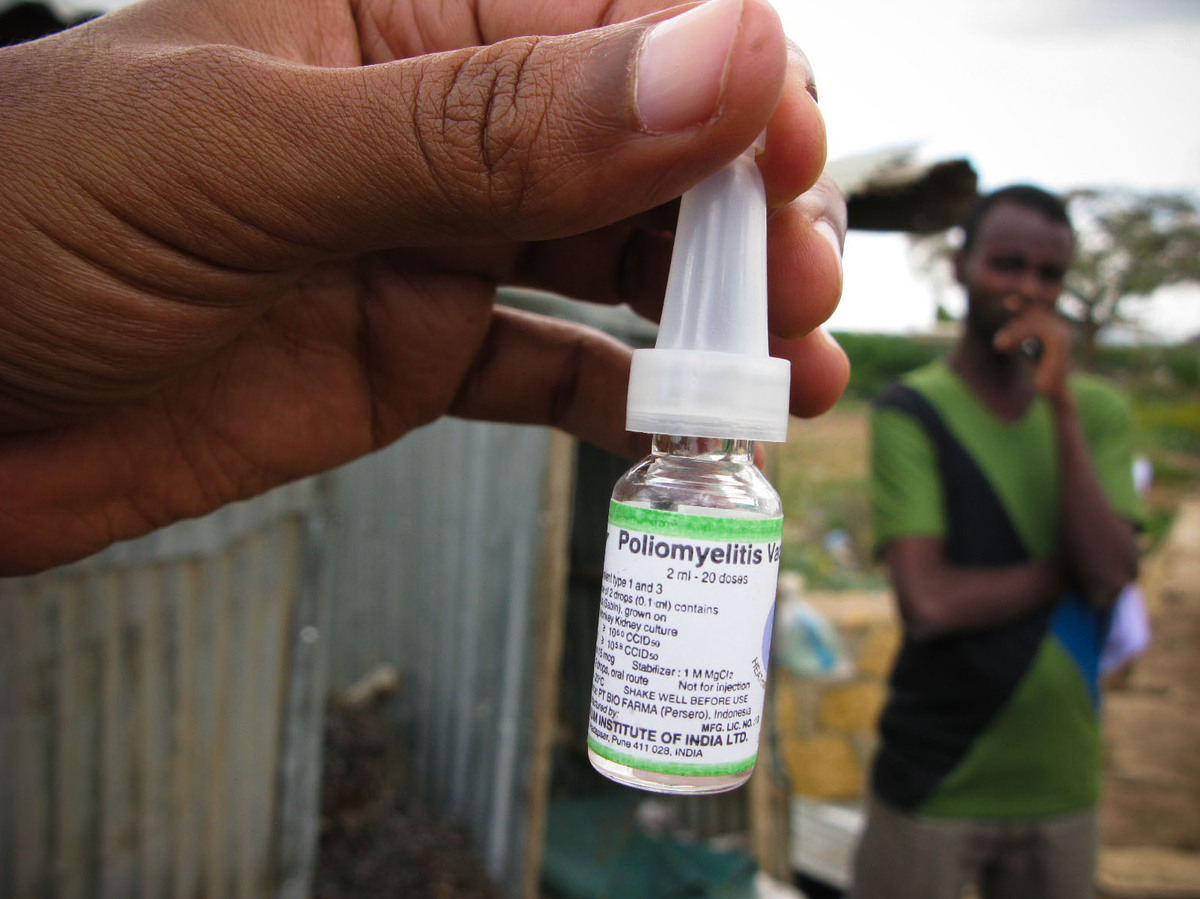 Earlier this year, Ethiopia carried out five mass immunization campaigns against polio along the Somali border. But to be fully protected, kids need several doses of the oral vaccine.

Global efforts to eradicate polio have made impressive progress over the past decade. Last year there were only 223 cases anywhere in the world.

But armed conflict and chaos are making it tough for the world to wipe out the virus completely.

Polio has re-emerged in war-torn Syria after more than a decade, the World Health Organization reported Tuesday. "The original cluster of suspected cases was 22 cases," says the WHO's Oliver Rosenbauer. "Out of those, 10 have now been confirmed as polio. The others are still being processed in the laboratory."

Over in the Horn of Africa, an outbreak has ballooned into more than 190 cases. The outbreak's epicenter is Somalia, where fighting and violence have kept vaccinators from reaching hundreds of thousands of kids in the past few years.

Health officials are concerned that polio could become endemic in Syria and the Horn of Africa. They have launched massive emergency vaccination campaigns in both regions to try to protect millions of children against the crippling virus.

But polio infections in Somalia have already spread to Kenya, South Sudan and Ethiopia. A recent visit to the Somali-Ethiopian border highlights just how easily the virus can move silently around rural areas — and eventually find kids who aren't vaccinated. 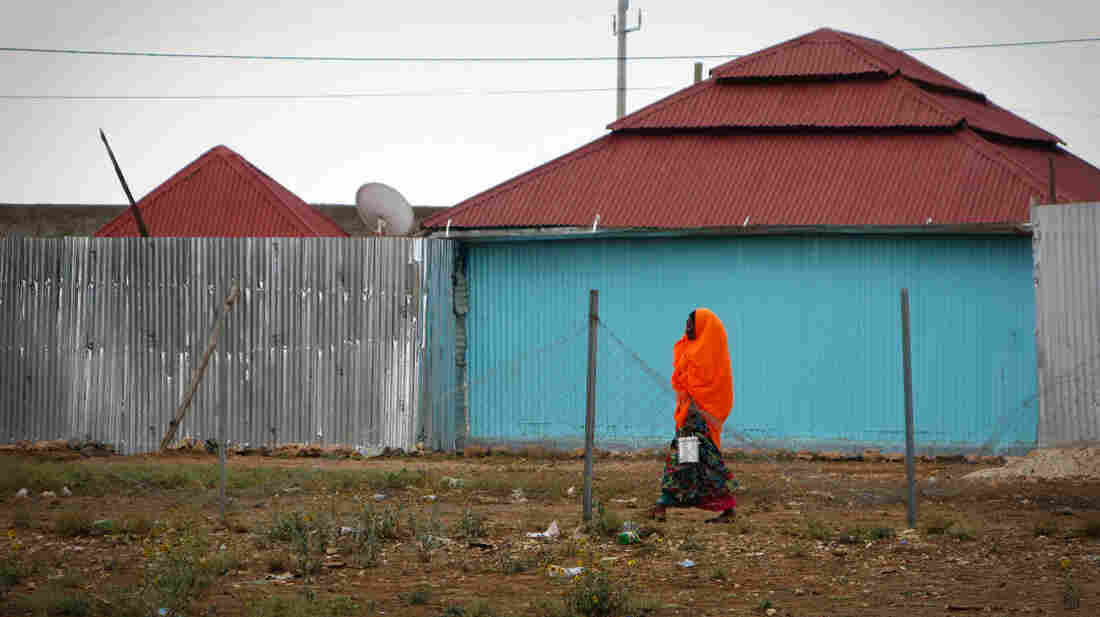 The town of Wajaale, Ethiopia, is located along the Somali border. The region around the border here is peaceful. But farther south, armed militants rule the area on the Somali side. Jason Beaubien/NPR hide caption 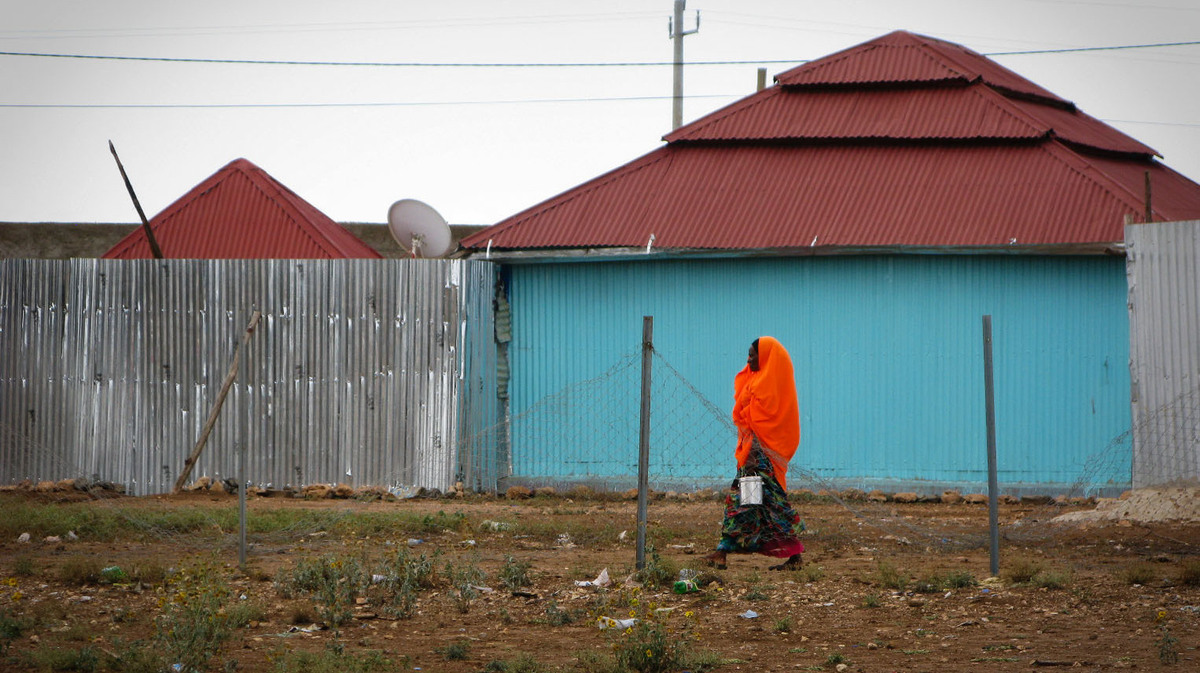 The town of Wajaale, Ethiopia, is located along the Somali border. The region around the border here is peaceful. But farther south, armed militants rule the area on the Somali side.

So far Ethiopia has reported only six cases of polio compared with 174 in Somalia. But the landlocked country shares a thousand-mile border with Somalia. Most of it's unmarked and uncontrolled. Goat, sheep and camel herders move back and forth across the arid plains between the two countries seeking fresh pastures for their animals.

At the border town of Wajaale, a frayed, knotted rope strung across the road marks the international boundary. The rope is ignored by just about everyone. Young men step over it. Vendors with wheelbarrows full of vegetables scoot under it.

Ethiopian authorities acknowledge that it's impossible to completely control the flow of people between the two countries. But in an effort to limit the importation of polio, Ethiopia has set up 13 vaccination checkpoints at major crossings. The health bureau has also deployed vaccinators to nearly 40 informal points of crossing along the border.

In Wajaale, the vaccination station is a small shack next to the rope on the Ethiopian side. When I visited the station one morning in early October, the vaccinator was absent. The sign announcing mandatory polio vaccination for all children had been tied back so that it was unreadable. 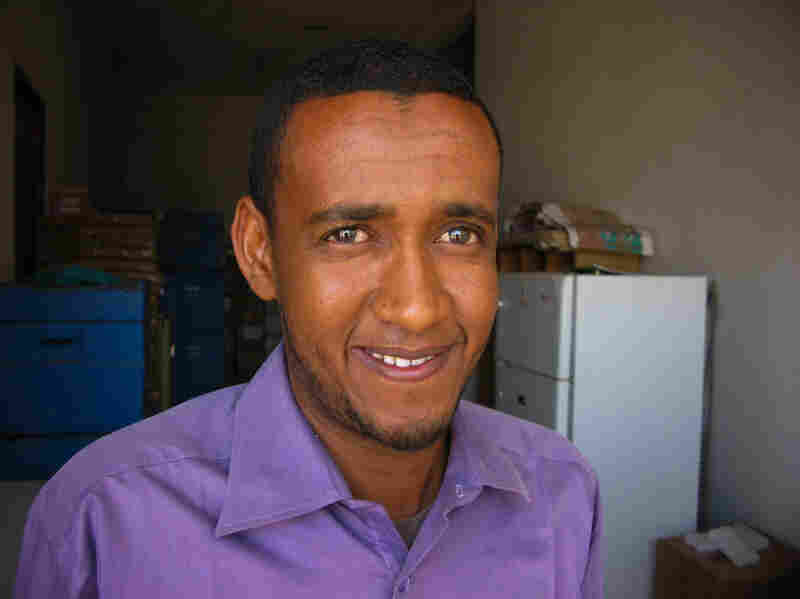 Ethiopian health official Abdulahi Mohamed says vaccinators along the Somali border are charged with immunizing all kids crossing who are under age 15. But he concedes that extremely poor pay may sap the workers' motivation. Jason Beaubien/NPR hide caption 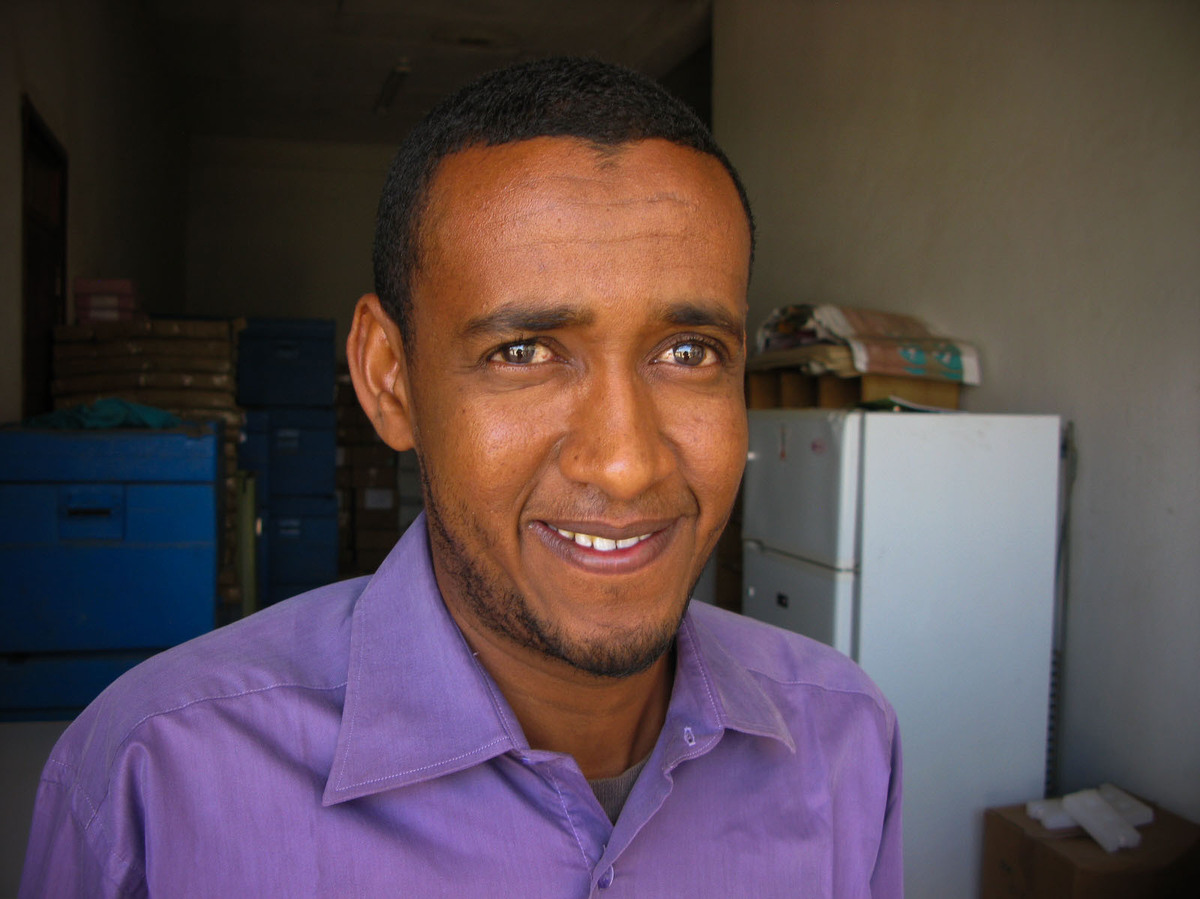 Ethiopian health official Abdulahi Mohamed says vaccinators along the Somali border are charged with immunizing all kids crossing who are under age 15. But he concedes that extremely poor pay may sap the workers' motivation.

The goal of these border vaccination posts is to immunize every child, under the age of 15, who crosses in either direction, says Abdulahi Mohamed, who is with the government's regional health bureau. "They have their vaccines there," he says pointing to a small ice chest. "They check the children. Everyone under 15, they give one dose of polio [vaccine]."

Abdulahi and other Ethiopian officials say that each border vaccination post is immunizing hundreds of kids every day. But during my visit, only 10 children had been vaccinated by noon.

The vaccinators are poorly paid, Abdulahi says — the equivalent of about $30 a month. He concedes that it's difficult to keep them motivated.

Nevertheless, Ethiopia's Health Ministry says that containing this polio outbreak is a top priority. "If you have a house that's caught fire, you need to extinguish [the flames]," says the country's health minister, Dr. Kebede Worku. "So we take this seriously."

Soon after polio was detected in Somalia this spring, Ethiopia carried out five mass immunization campaigns against the virus along the Somali border. Earlier this month they launched a national campaign to try to reach every child in the country — some 13 million kids. The World Health Organization and UNICEF have helped to fund the drives and stock them with vaccine.

But the vaccination campaigns are organized, run and largely paid for by Ethiopia's Ministry of Health, and the operation has put huge new burdens on an already strained national health system. The Ethiopian government even had to deploy special security details to travel with the vaccination teams in some parts of the country along the Somali border.

"The other side of the border [in Somalia] is totally insecure," Kebede says. "Some of the areas are governed by militants." These militants include al-Shabab, which claimed responsibility last month for the attack on a Nairobi shopping mall that left more than 60 people dead.

Another challenge of running a polio vaccination campaign in remote parts of the Horn of Africa is that the vaccine needs to be kept cold. Most Ethiopian health clinics in the province bordering Somalia don't have electricity. The Health Ministry has to use ice packs and portable, kerosene-fired refrigerators to keep the polio vaccine chilled.

The mass immunization campaigns are also complex and expensive logistical operations, Kebede says. They require hundreds of additional staff, hundreds of thousands of vaccine doses, extra kerosene for the refrigerators, and vehicles to deliver supplies to the targeted area. Each immunization team needs tally sheets and maps.

Plus, polio infects some people without ever making them sick. These so-called asymptomatic carriers appear healthy and can spread the virus to new communities.

"With polio ... the vast majority of the people who are infected and spreading [virus] are not paralyzed," says Dr. Walter Orenstein, a vaccine specialist at Emory University in Atlanta. "So there's a lot of "silent transmission."

"For every case of paralytic polio, we can assume there are at least 100 to 200 — maybe a thousand people," Orenstein says, "who are infected and potentially spreading the virus."