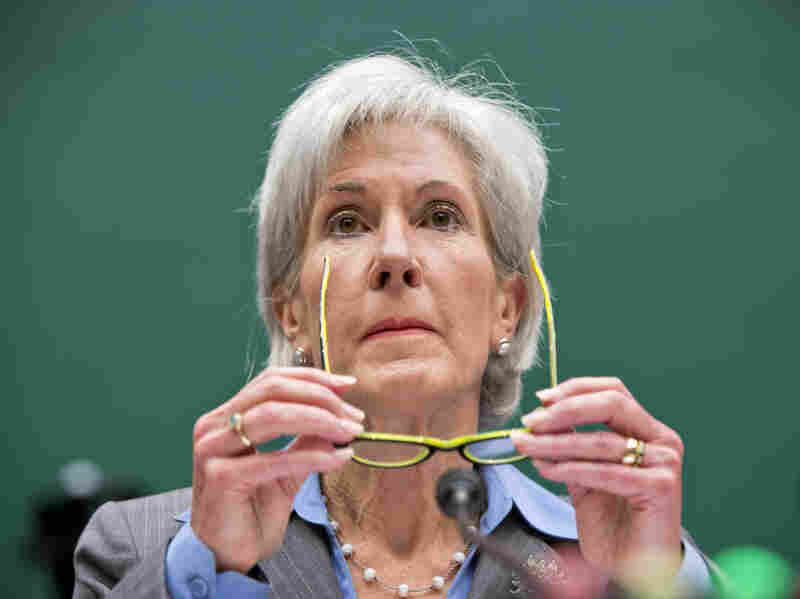 Health and Human Services Secretary Kathleen Sebelius headed to Capitol Hill Wednesday for a date with lawmakers frustrated by the rocky rollout of the HealthCare.gov website.

What she got at the House Energy and Commerce Committee was four hours of venting from Democrats and Republicands alike.

Like Medicare and Medicaid chief Marilyn Tavenner a day earlier, Sebelius opened her testimony with an apology.

"I am as frustrated and angry as anyone with the flawed launch of Healthcare.gov," she told the committee. "So let me say directly to these Americans, you deserve better. I apologize."

But unlike Tuesday's hearing for Tavenner before the Ways and Means Committee, Sebelius's appearance was marred by an additional embarrassment.

"This is what's happening right now with this website — we've had somebody in the back trying to sign on," said Rep. Marsha Blackburn, R-Tenn. "It is down."

Indeed, HHS officials confirmed later in the day another failure by outside vendor Verizon Terremark, which they said was related to one last weekend. This latest one resulted in what Centers for Medicare and Medicaid Services Spokeswoman Julie Bataille called a "partial outage of HealthCare.gov."

Cable networks CNN and MSNBC both showed Sebelius in a split screen, with her on one side and a computer error message on the other. Sebelius also confirmed that the reason officials aren't giving out enrollment information yet is that they're not sure whether it's accurate.

More Technical Issues For Obamacare, But Good News For Medicare

"Sir," she told Rep. Lee Terry, R-Neb., "I would tell you right now it is not reliable data according to the insurance companies who are eager to have customers. They are not getting reliable data all the way through the system."

But website woes took up only a portion of the questioning from members of the Energy and Commerce Committee. Members also challenged the secretary about insurance company cancellation letters now going out.

"I would guess there are a lot of us on this panel today hearing from angry and confused constituents, who are now being forced to go onto an inept website, whether they like it or not, to shop for a replacement policy," said Committee Chairman Fred Upton, R-Mich.

People whose coverage is being canceled will have plenty of options, including from their current insurance company, said Sebelius.

"Actually it's the law that they must get another plan. Continuous coverage is part of the law," she told the committee.

But Blackburn said many of her constituents aren't happy with the new options, some of which are more expensive than the plans they have now, even if those plans don't offer comprehensive coverage.

Democratic members of the committee were frustrated with the Republican attacks, noting since they do not support the law, they were likely not genuine about attempts to fix it.

"Unlike Chicken Little," said Rep. Eliot Engel, D-N.Y., "my Republican colleagues are actually rooting for the sky to fall."

Apparently Sebelius did well enough to earn another vote of confidence from the White House. And next week she'll appear before the Senate Finance Committee. Several senators have called for her firing or resignation.