Accessibility links
AIDS Scientists Encouraged By Antibodies That Hit Monkey Virus : Shots - Health News A monkey virus that's a stand-in for HIV plummeted to undetectable levels when animals got potent antibodies of a type recently discovered in some humans. A single antibody injection was enough to do the job. 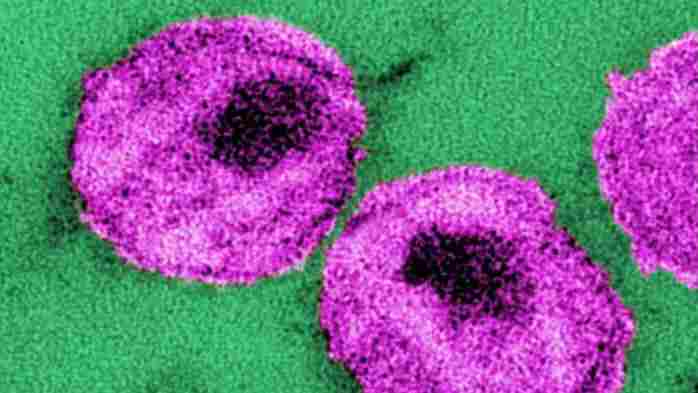 These HIV viruses even look a little like bull's-eyes. A. Harrison and P. Feorino/CDC hide caption 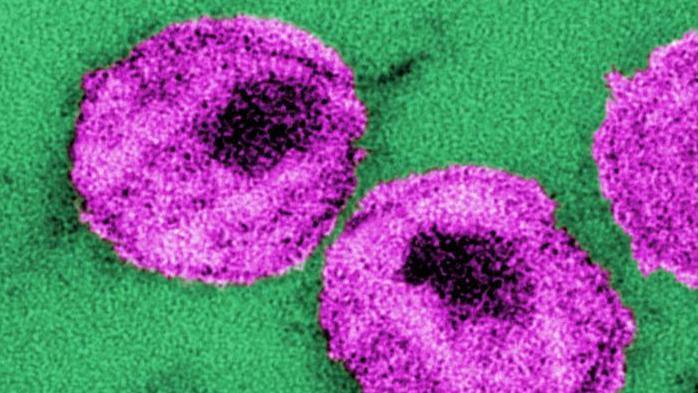 These HIV viruses even look a little like bull's-eyes.

A. Harrison and P. Feorino/CDC

At least in monkeys infected with an experimental virus similar to the human AIDS virus, the approach produced what researchers call "profound therapeutic efficacy."

The results appear Thursday in two papers published by Nature — one from a Boston group and a confirmatory report from the National Institute of Allergy and Infectious diseases.

The virus plummeted to undetectable levels in animals that got potent antibodies of a type recently discovered in some humans with HIV. And the virus remained undetectable for weeks after a single antibody injection.

Most impressive, several monkeys who started out with low levels of HIV in their blood maintained extremely low levels of the virus in their systems months after a single antibody injection.

The researchers think they may have turned these animals into so-called elite controllers — like the 1 percent of HIV patients who are able to suppress the virus even without antiviral drugs.

The scientists say their results justify experiments in humans with HIV. And the potential implications seem to be large, in at least two ways:

"The findings of these two papers could revolutionize efforts to cure HIV," two cure-seekers write in a Nature commentary. Why? Louis Picker of Oregon Health and Science University and Steven Deeks of the University of California, San Francisco speculate that combining monoclonal antibodies with conventional antiviral drugs might turbocharge the suppression of HIV, stimulate the destruction of reservoirs of HIV-infected cells, and suppress the generalized immune activation that accompanies chronic HIV infection.

"At the very least, these results will catalyse collaborations between the massive teams of experts who have for decades worked on HIV prevention and treatment in separate venues," Picker and Deeks predict.

The findings stem from discoveries over the past year or so that some humans with HIV occasionally make antibodies to the virus that are highly potent. That insight came after years of disappointing efforts to find what researchers call broadly neutralizing antibodies against HIV — or to stimulate their production with experimental vaccines.

Dan Barouch of Beth Israel Deaconess Medical Center in Boston and his colleagues generated several types of the newly discovered antibodies in mice. They then injected the antibodies into 18 rhesus monkeys that had been infected nine months earlier with a specially concocted virus with features of both HIV (the human AIDS virus) and SIV (the simian, or monkey, version). The hybrid virus, which doesn't appear in nature, is called SHIV.

The antibody injections resulted in rapid clearance of free-floating SHIV from the animals' blood that was sustained for weeks or months, until the antibodies gradually disappeared.

There was also evidence that the antibodies stimulated the monkeys' own immune systems to target and kill the cells infected by SHIV. That needs confirmation, but if it happens that would be important because long-term control of infection requires the elimination of these hiding places — the cells that harbor viral genes that can give rise to new HIV.

The durability of the antibody treatment varied according to how much SHIV the monkeys had in their systems to start with.

The Boston researchers were so surprised by their findings that they didn't publish them until the NIH group replicated them in a smaller study.

Other scientists say the implications of this early immunotherapy study are potentially far-reaching. NIH Director Francis Collins told The Wall Street Journal that he could imagine shifting HIV treatment from daily antiviral pills to injections of monoclonal antibodies every three months. "This is a really new wrinkle in a field that needs new wrinkles," Collins says.