Accessibility links
Childhood Maltreatment Can Leave Scars In The Brain : Shots - Health News Brain scans may help people who were ill treated as children realize that they process fear differently than others. They may have a harder time realizing what's truly a threat and what's not. Researchers say that can lead to increased risk of anxiety and depression. 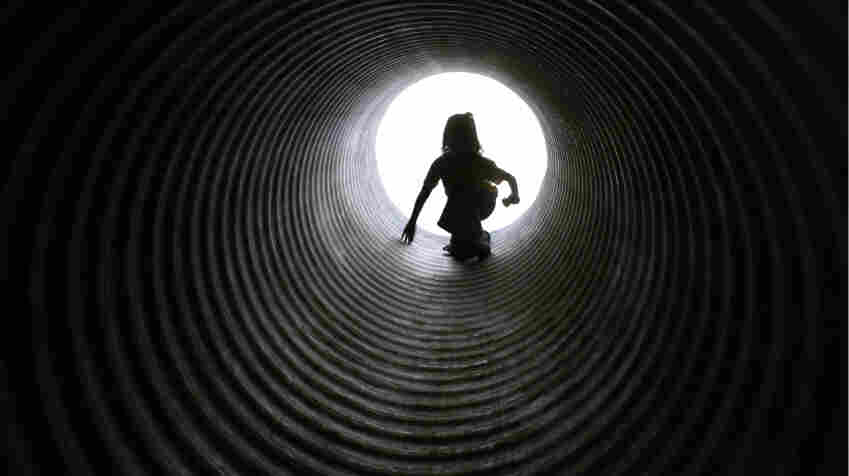 Maltreatment during childhood can lead to long-term changes in brain circuits that process fear, researchers say. This could help explain why children who suffer abuse are much more likely than others to develop problems like anxiety and depression later on.

Brain scans of teenagers revealed weaker connections between the prefrontal cortex and the hippocampus in both boys and girls who had been maltreated as children, a team from the University of Wisconsin reports in the Proceedings of the National Academy of Sciences. Girls who had been maltreated also had relatively weak connections between the prefrontal cortex the amygdala.

Those weaker connections "actually mediated or led to the development of anxiety and depressive symptoms by late adolescence," says Ryan Herringa, a psychiatrist at the University of Wisconsin and one of the study's authors.

Maltreatment can be physical or emotional, and it ranges from mild to severe. So the researchers asked a group of 64 fairly typical 18-year-olds to answer a questionnaire designed to assess childhood trauma. The teens are part of a larger study that has been tracking children's social and emotional development in more than 500 families since 1994.

The participants were asked how strongly they agreed or disagreed with statements like, "When I was growing up I didn't have enough to eat," or "My parents were too drunk or high to take care of the family," or "Somebody in my family hit me so hard that it left me with bruises or marks."

There were also statements about emotional and sexual abuse. The responses indicated that some had been maltreated in childhood while others hadn't.

All of the participants had their brains scanned using a special type of MRI to measure the strength of connections among three areas of the brain involved in processing fear.

One area is the prefrontal cortex, which orchestrates our thoughts and actions, Herringa says. Another is the amygdala, which is "the brain's emotion and fear center," he says, and triggers the "fight or flight" response when we encounter something scary.

Herringa says messages from the amygdala to the prefrontal cortex are often balanced by input from a third area, the hippocampus, which helps decide whether something is truly dangerous. "So, for example, if you're at home watching a scary movie at night, the hippocampus can tell the prefrontal cortex that you're at home, this is just a movie, that's no reason to go into a full fight or flight response or freak out," Herringa says.

At least that's what usually happens when there's a strong connection between the hippocampus and prefrontal cortex, and the fear circuitry is working correctly.

That suggests the fear circuitry wasn't working the way it should, Herringa says. The result seems to explain something he sees in many young patients with anxiety and depression and a history of maltreatment. "These kids seem to be afraid everywhere," he says. "It's like they've lost the ability to put a contextual limit on when they're going to be afraid and when they're not."

The finding that girls have weaker connections to two areas of the brain, not just one, could help explain why they seem to be more sensitive than boys to maltreatment, Herringa says.

The results of the new study are important because they suggest better ways to diagnose and treat mental problems related to maltreatment, says Greg Siegle, a psychologist at the University of Pittsburgh.

"Maltreatment is a disorder where often people are not even aware of the extent of their symptoms," Siegle says. So having an objective test would be "a significant advance," he says.

The study also shows that brain researchers are making some progress in their quest to make mental health care more like physical health care, where objective tests confirm a diagnosis and measure the effectiveness of treatment, Siegle says.

"In psychiatry, in psychology, we very rarely have those tests because we just don't know the biological and brain mechanisms," he says. "This study is starting to get at what mechanisms we should be looking at."