Accessibility links
How A California Law To Encourage Vaccination Could Backfire : Shots - Health News The number of children skipping vaccines has been rising, raising concerns about outbreaks of measles and other infections diseases. A California law designed to encourage parents to get information before deciding about vaccination has been complicated by the governor's addition of an exemption for members of religious groups.

How A California Law To Encourage Vaccination Could Backfire

How A California Law To Encourage Vaccination Could Backfire 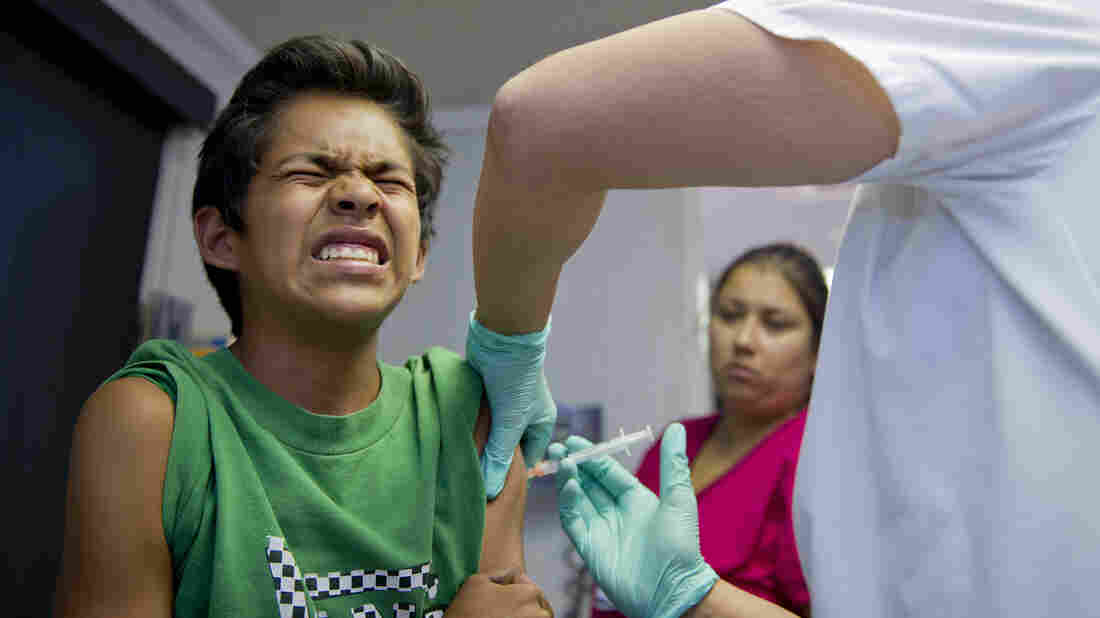 Public school student Julio Valenzuela, 11, grimaces as he gets a vaccination before the start of the school in Lynnwood, Calif., on Aug. 27. Vaccines are required for school attendance. ROBYN BECK/AFP/Getty Images hide caption 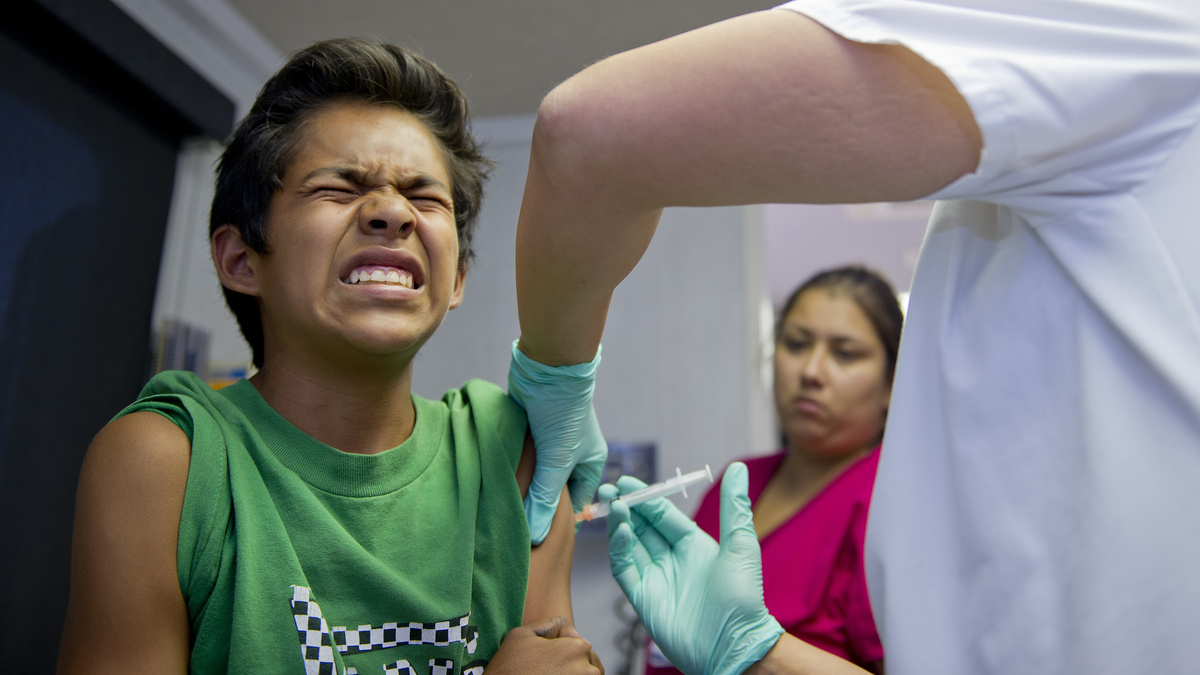 Public school student Julio Valenzuela, 11, grimaces as he gets a vaccination before the start of the school in Lynnwood, Calif., on Aug. 27. Vaccines are required for school attendance.

California has a new law that's supposed to get more of the state's children vaccinated against measles, whooping cough and other infectious diseases.

But the law has taken a strange turn on its way to being put into action, one that may instead make it easier for parents to exempt their children from required vaccinations.

In recent years the number of parents who request so-called personal belief exemptions from vaccines has been rising. It's gotten to the point that public health officials fear that there could be disease outbreaks in parts of California. Same goes for other states where exemption rates are high.

"I am signing AB 2109 and am directing the Department of Public Health to oversee this policy so parents are not overly burdened in its implementation. Additionally, I will direct the department to allow for a separate religious exemption on the form. In this way, people whose religious beliefs preclude vaccinations will not be required to seek a health care practitioner's signature."

The full text of Brown's signing letter is available here.

To address the problem in California, the state legislature passed a law in 2012 requiring parents seeking an exemption to first talk with a health care provider about the risks and benefits of vaccines.

Last week the state's health department released the form that parents must use to request an exemption. It includes a box for a health care provider to sign, showing that the conversation has taken place.

But the form also includes something else. Another box reads, "I am a member of a religion which prohibits me from seeking medical advice or treatment from authorized health care practitioners."

Where did the box come from? California Gov. Edmund G. Brown Jr. When he signed the bill into law, he directed the state's health department to include a "separate religious exemption" on the form.

"It was a surprise," says Catherine Flores Martin, executive director of the California Immunization Coalition, a state-funded advocacy and education group. She and other public health types have been puzzling over it ever since.

"I don't think [Brown] is anti-vaccine at all," Martin told Shots, noting that both the governor and legislators were heavily lobbied by groups opposed to childhood vaccines. "He's very pro-science. I could not say what drove him to do this."

But Martin and others say this new religious group exemption could fatally weaken the law.

"It will give parents who want to get out of it an easy out," says Dorit Reiss, at University of California, Hastings College of the Law. That includes parents who in the past checked the exemption box just because it was easier than taking the kids in for shots. "I'm not sure it's good public policy to encourage people to lie."

Reiss sees another big problem with the new exemption — it's not part of the law. "With all due respect to the governor, he can't unilaterally change the law," she says.

That opens up the state to legal challenges from both pro- and anti-vaccine groups, Reiss tells Shots, including constitutional questions like whether it discriminates against people who want an exemption but aren't religious, or whether parents have a right to refuse medical treatment for their children.

And it's going to make it pretty darned hard for schools or state agencies to know if parents need to get the doctor signoff or not. The forms says they don't. But the law says they do.

"We're going to live with it and see if the exemption rates stay the same or go up," Martin says. "If they go up, then essentially the governor gutted the bill by writing that."