Accessibility links
The Case Against Brain Scans As Evidence In Court : Shots - Health News Criminal lawyers increasingly turn to brain science to explain their clients' actions. It's a tactic that's kept defendants out of jail. But neuroscientists say scans can be easily misused or misinterpreted. Now judges must decide whether the evolving science is being used in a sensible way. 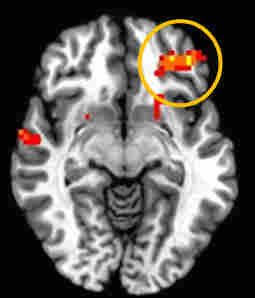 It's not just people who go on trial these days. It's their brains.

More and more lawyers are arguing that some defendants deserve special consideration because they have brains that are immature or impaired, says Nita Farahany, a professor of law and philosophy at Duke University who has been studying the use of brain science in court.

Farahany was a featured speaker at the Society for Neuroscience meeting in San Diego this week. Also featured were several brain scientists who are uncomfortable with the way courts are using brain research.

The approach has been most successful with cases involving teenagers, Farahany says.

"It seems like judges are particularly enamored with the adolescent brain science," she says. "Large pieces of their opinions are dedicated to citing the neuroscientific studies, talking about brain development, and using that as a justification for treating juveniles differently."

In one recent drug possession case, Farahany says, lawyers argued that a young man's statement to police couldn't be used even though he'd agreed to talk. His lawyers pointed to studies showing that adolescent brains are especially vulnerable to coercion.

"And it worked," Farahany says. "The prosecution had to basically start over in developing evidence against the juvenile because they couldn't use his own statements against him."

So judges and juries are being swayed by studies showing that adolescent brains don't function the same way adult brains do. One study like that was presented at the neuroscience meeting by Kristina Caudle, a neuroscientist at Weill Cornell Medical College. The study, funded by the National Institutes of Health, used a technology called functional MRI to look at how the brains of people from 6 to 29 reacted to a threat.

"The typical response — and what you might think is a logical response — is to become less impulsive, to sort of withdraw, to not act when there is threat in the environment," Caudle says. "But what we saw was that adolescents uniquely seemed to be more likely to act. So their performance on this task became more impulsive."

And Caudle found that in adolescents, an area of the brain involved in regulating emotional responses had to work much harder to prevent an impulsive response. This sort of study is great for understanding adolescent brain development in a general way, Caudle says.

"What it doesn't do is allow us to predict, for example, whether one particular teenager might be likely to be impulsive or to commit criminal behavior," she says.

And Caudle worries that a study like hers could be used inappropriately in court. "Jurors tend to really take things like MRI scans as fact, and that gives me great pause," she says.

Smart Teenage Brains May Get Some Extra Learning Time

A lot of the neuroscience presented in court is simply unnecessary, says Joshua Buckholtz, a psychologist at Harvard. "Anyone who's every had a teenager would be able to tell you that their decision-making capacities are not comparable to adults," he says.

And relying on brain science to defend juveniles could have unexpected consequences, Buckholtz says. For example, he says, if a prosecutor used an MRI scan to show that a 16-year-old who committed a capital crime had a very mature brain, "Would we then insist that we execute that juvenile?"

The task of integrating brain science into the judicial system will in large part be the responsibility of judges, Buckholtz says. And how it works will depend on how well judges understand "what a scientific study is and what it says and what it doesn't say and can't say," he says.