Accessibility links
Medicaid Enrollment Is Brisk Despite HealthCare.gov Troubles : Shots - Health News If you advertise it, they will come. Sign-ups for Medicaid are brisk, even in states that haven't expanded their programs with an infusion of federal dollars. Experts call that the "woodwork effect" — getting the word out to people who were already eligible. 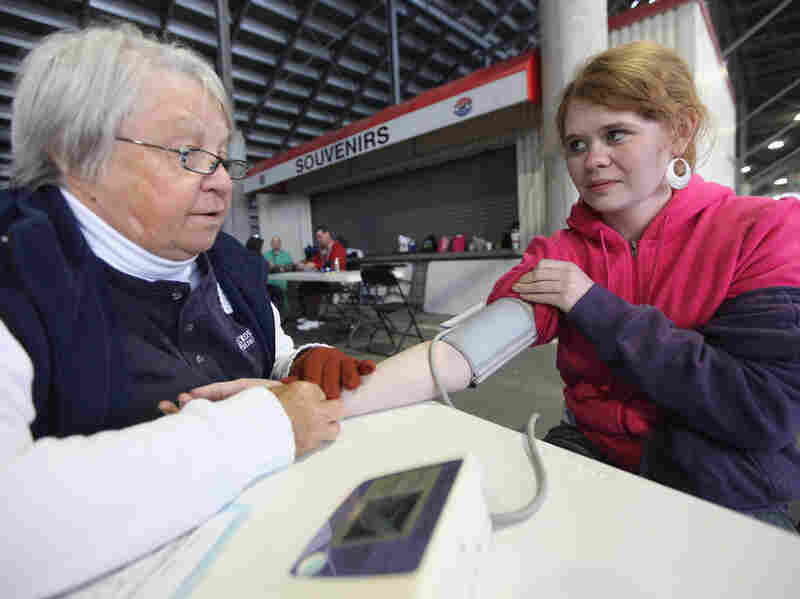 Buried in the paltry enrollment numbers for the Affordable Care Act that were released last week was something that came as a surprise to many — the success states are having signing people up for the Medicaid program, which provides health care to low-income people.

During the first month the health exchanges were open, just over 100,000 people managed to choose a private health plan, according to the report. But nearly four times as many were deemed eligible for Medicaid or actually enrolled in that program or its cousin, the Children's Health Insurance Program.

But people who have been working on the Affordable Care Act say that's neither a surprise nor a fair comparison.

"Comparing those numbers today is like comparing apples to baseballs," says Joan Alker. She's executive director of the Georgetown University Center for Children and Families.

One major reason for the brisk early enrollment in Medicaid is that many states have made it a point to reach out early to people they assume will be eligible, such as those already getting other benefits like food stamps.

The health law opens Medicaid up to everyone earning up to 133 percent of the federal poverty level. That's just over $15,000 for an individual.

And some states are making it very easy to sign up.

In Arkansas, Alker says, "the newly eligible received a letter in the mail, and they simply had to sign and return that letter in order to enroll. So does that sound like the exchange enrollment process to you? No, it doesn't."

Indeed, Oregon has already signed up more than 70,000 people for its expanded Medicaid program, also by soliciting its food stamp enrollees, yet its online health exchange is still not yet up and running.

Oregon Shines On Medicaid, As Texas Stalls On Sign-Ups

Advocates for the program call it the "welcome mat" effect. But it's more commonly called the "woodwork effect."

"At any given time, only two out of three people who are eligible for Medicaid are enrolled," says Michael Cannon, director of health policy studies at the libertarian Cato Institute. "And so if you have this big expansion with this big media education campaign, a lot of those people who are already eligible will go and enroll in the program."

Which is why in places like Florida and Texas, states that are not expanding Medicaid, the exchanges have already qualified more than 10,000 new Medicaid enrollees each.

In states that are expanding the program, the federal government is footing the entire bill for the first three years for the newly eligible, then gradually phasing down to 90 percent. But Cannon notes that for people who were already eligible, states will have to pay their regular share of Medicaid costs.

Not only will states have to pay more for these newly enrolled people, Cannon says, but putting more people on Medicaid is not necessarily a good thing. He says many have questioned whether it's a very good program at all.

"The access to care and the quality of care in Medicaid is not what it should be, and so there's a big question about health outcomes of Medicaid and how do they compare to private insurance and even not having health insurance," he says.

But at least some of those questions have been answered in a series of studies done in Oregon.

"It seems clear that there are substantial benefits for low-income adults who enroll in Medicaid relative to being uninsured," says Katherine Baicker of the Harvard School of Public Health. She's one of the lead researchers of the studies.

Low-income adults on Medicaid had an easier time getting health care, Baicker says. They also used more health care and had far fewer financial problems than those who remained uninsured.

"We saw big drops in depression rates for people who got Medicaid relative to being uninsured," Baicker says. People also said their health was better.

The studies did not, however, find measurable improvement in several aspects of physical health.

All of which means Medicaid and its expansion remain controversial.

But one of the goals of the Affordable Care Act was to expand health insurance to millions more people, including through the Medicaid program. It just happens to be the one where enrollment is working at the moment.