Accessibility links
Brain Cells 'Geotag' Memories To Cache What Happened — And Where : Shots - Health News Scientists have identified special cells in the brain's hippocampus that mimic a trick of some digital cameras. These cells automatically 'tag' the memory of each event in our lives with information about where that event took place — the better to recall, perhaps, where we left our lost keys. 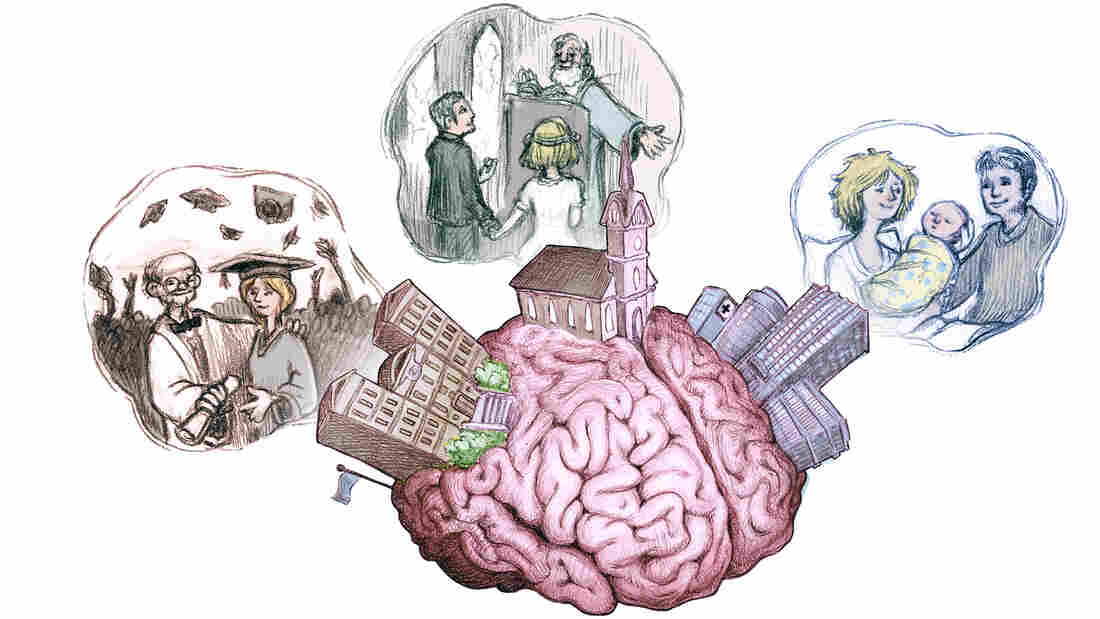 Think back to an important event in your life: a graduation, a birth, a special Thanksgiving dinner. Chances are you're remembering not only what happened, but also where it happened. And now scientists think they know why.

As we form so-called episodic memories, the brain appears to be using special cells in the hippocampus to "geotag" each event, researchers report in Science. The process is similar to what some digital cameras do when they tag each picture with information about where the image was taken.

As a result of this automatic geotagging, memories about places and events are "fused together," says Michael Kahana, a psychologist at the University of Pennsylvania, and one of the study's authors. "You come to a location where something happened and it reminds you of an event," he says. "Or you think of an event and it reminds you of the place where it happened."

Kahana was part of an international team of scientists that figured out how the brain's geotagging system works by studying seven epileptic patients in Germany. The patients were awaiting surgery and had wires in their brains that allowed the researchers to measure the activity of individual brain cells. That gave Kahana's team a way to watch what happened as memories were formed and retrieved.

Patients in the study played a video game involving a virtual town. In the early stages of the game, "you drive around the town and you learn where the different locations are that matter," Kahana says. Once the players had formed a mental map of the town, the game had them drive to specific locations, like the toy store or the flower shop or the bakery.

Meanwhile, the researchers were monitoring activity in each player's hippocampus, which is where the brain creates the mental maps that help us navigate. These maps rely on special "place" cells that become active when we reach a specific location. And the researchers were able to identify place cells in each player that responded to specific locations in the virtual town.

Once these cells were identified, the players began the last part of the video game. Now each time they arrived at a location, they learned what item they had delivered there. "So when you get to the bakery, a voice will come on and tell you you've just delivered a zucchini," says Kahana.

This created mental links between places (like the bakery) and events (like delivering a zucchini). Then came the hard part: finding evidence of those links in the brain.

To do this, the researchers monitored the activity of place cells while players recalled specific objects they had delivered. And the team found that just before a person remembered they had delivered a zucchini, there was a burst of activity in the cells associated with the bakery — the place where the delivery was made.

This suggests the hippocampus is constantly using place cells to geotag events in our lives, Kahana says.

The finding reveals a lot about how the brain provides context to episodic memories, says Howard Eichenbaum, of Boston University. Knowing where something happened is one important bit of context. But it's also important to know when something happened, he says.

Cells that act as time stamps haven't been found yet in a human brain, Eichenbaum says. But he has found cells that perform this function in the rat hippocampus.

"So it seems like the hippocampus maps things in time," Eichenbaum says, "very much the way it maps in space."