Accessibility links
Parents Of Sleep-Deprived Teens Push For Later School Start Times : Shots - Health News Scientists agree that teenagers naturally go to bed late and sleep late, too. But high school start times are traditionally very early. Proponents of later start times say they're finally getting traction. The result, they say, will be happier kids who do better in school.

When he sleeps right through it, Mom starts the nudging. But she also has to wake up 16-year-old Lily. She flips on the bedroom lights. "Lily, you gotta get up!"

They have to be out the door before 6:35 a.m. in their Annapolis, Md., neighborhood in order to catch the bus for a 7:17 school start. "I wish I didn't have to be awake right now," says Lily. 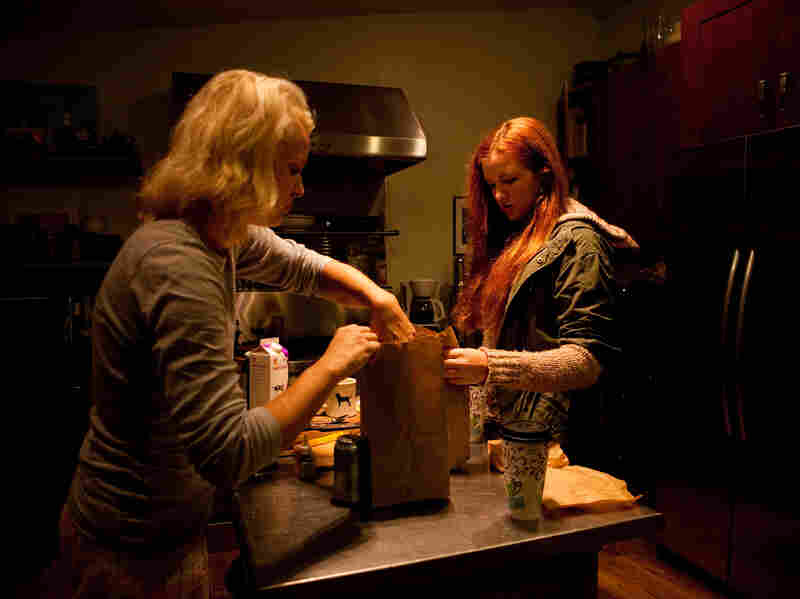 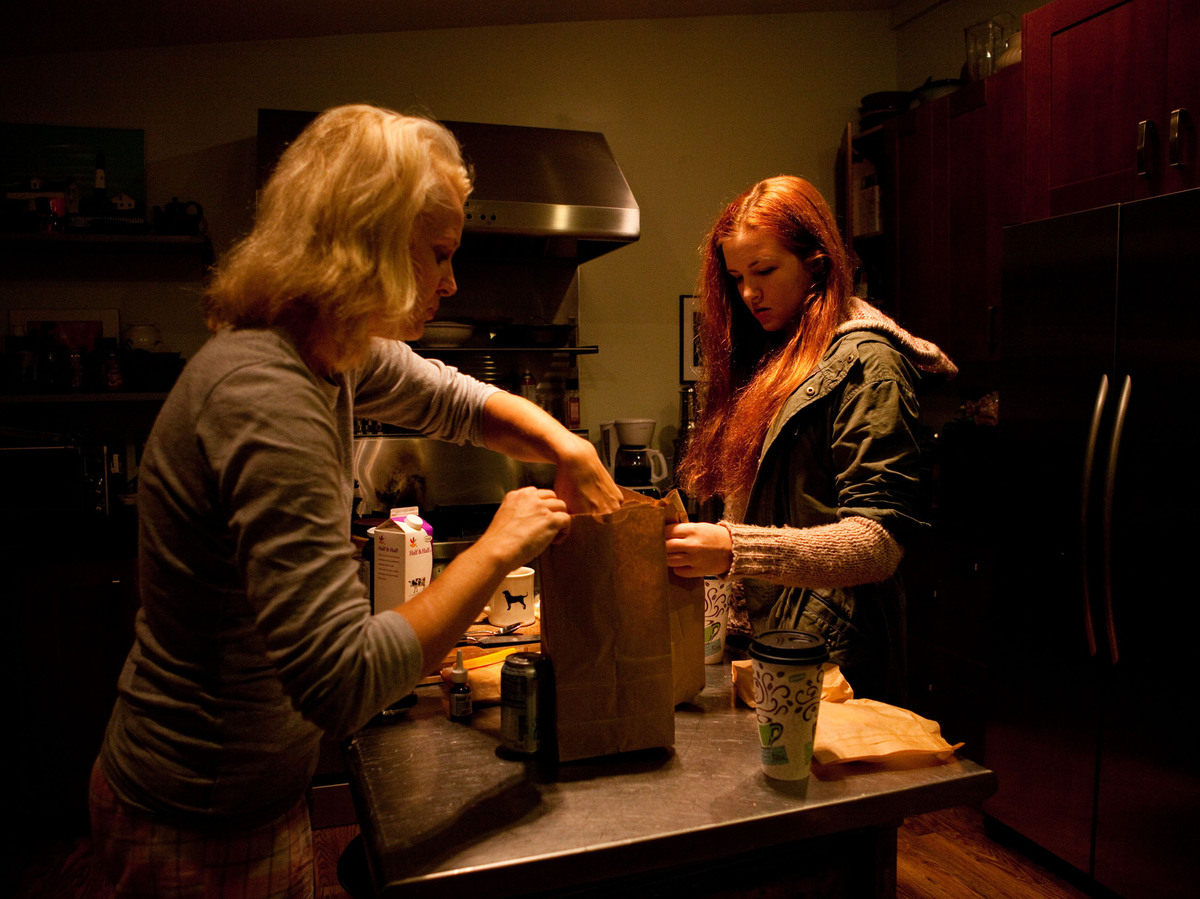 Cristina Sevin packs lunches for her two teenagers in Annapolis, Md., on Nov. 22.

She barely has time to brush her teeth and grab a go-mug of hot tea before she and Isaac head out into the predawn darkness.

Cristina Sevin is convinced there's a better way to raise teenagers: Push back the start of school one hour. Instead of a 7:17 morning bell, how about 8:18?

Sevin's family is part of a growing grass-roots campaign advocating for later high school start times. A national petition to promote legislation that would prevent public schools from starting before 8 a.m., started by the group Start School Later, has thousands of signatures from all 50 states.

There have been years of debate on this issue. Sleep scientists argue that early high school start times conflict with teens' shifting circadian rhythms. Beginning in puberty, "adolescents are programmed to fall asleep later," says Dr. Judith Owens, who directs the Sleep Medicine Clinic at Children's National Medical Center in Washington, D.C. And she says many teenagers can't fall asleep before 11 p.m.

Because teenagers need eight to nine hours of sleep, waking up at 6 a.m. can lead to a pattern of sleep deprivation. And that puts them at higher risk of a whole range of potential problems, from depression to automobile accidents. 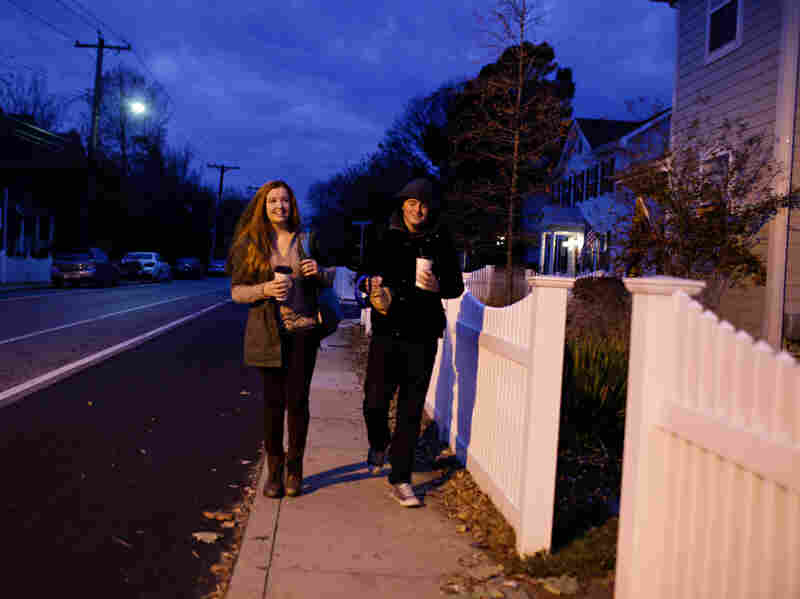 Lily and Isaac walk to catch the bus at 6:35 in the morning. Maggie Starbard/NPR hide caption 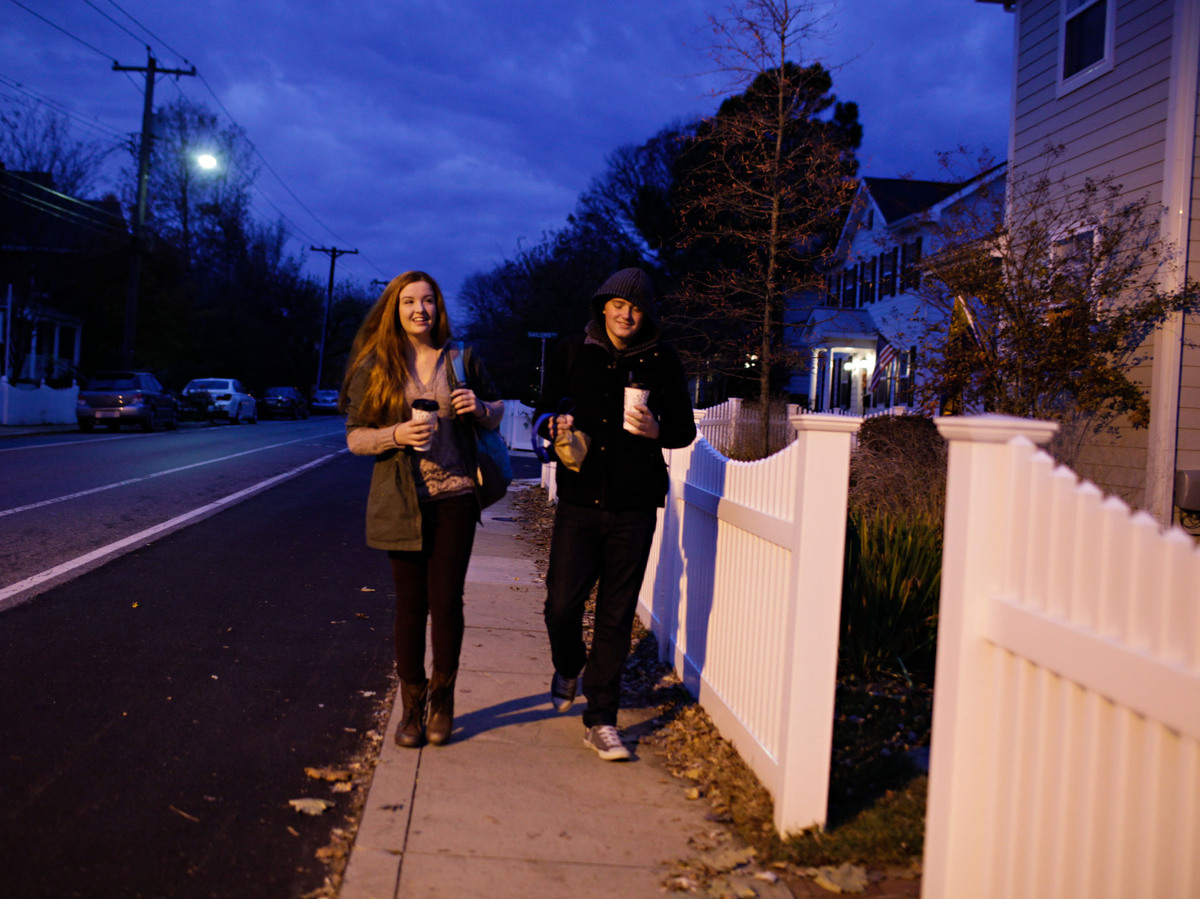 Lily and Isaac walk to catch the bus at 6:35 in the morning.

So Owens says it makes sense to move school start times later. As it is now, "we are asking [teens] to be awake and alert at the time in their 24-hour clock when their alertness level is at its very lowest."

A new poll by NPR, the Robert Wood Johnson Foundation and the Harvard School of Public Health finds that 50 percent of parents of students in high school report a start time before 8 a.m. And almost 1 in 5 parents report school starting even earlier, before 7:30 a.m. (See the full results here.)

Proponents of later start times say that they're gaining traction.

"Momentum has picked up considerably in the past few years," says Terra Ziporyn Snider, executive director of Start School Later. Her group maintains a list of schools in 29 states that have made changes.

Tuck That Teen Into Bed

And she points to two very large school districts in the Washington, D.C., area — Fairfax County, Va., and Montgomery County, Md. — that are both considering later starts. A petition in Montgomery County started by activist Mandy Mader to push high school start times to 8:15 or later has garnered more than 11,000 signatures.

But there are logistical obstacles. Transportation is one. How do schools rearrange bus schedules to pick up high school students later, without alarming the parents of elementary school kids who might be picked up earlier to accommodate the changes?

But given the fact that many schools have already overcome these obstacles and moved to later school start times, Ziporyn Snider says, "the real problem isn't sports or jobs or day care; the real problem is fear of change and failure of imagination."

There's a gathering body of evidence to suggest that pushing back school start times can cut the risk of car crashes. In Fayette County, Ky., the number of car accidents caused by teenage drivers dropped almost 17 percent in the two years after the county pushed start times back an hour to 8:30 a.m. That compares with an 8 percent increase in crashes among 17- and 18-year-old drivers statewide over the same time.

Despite the biological and societal nudging that keeps many teenagers awake well past midnight, it does help when parents set a bedtime, experts say — even if that bedtime is 11:30 p.m.

Teens whose parents set a bedtime are more likely to get enough sleep and function better at school, a recent study found. Owens says: "If a parent sets a bedtime, it at least gets the message across that [they] feel it's important."