Accessibility links
ACLU Sues, Claiming Catholic Hospitals Put Women At Risk : Shots - Health News A woman in Michigan says that a Catholic hospital failed to give her adequate health care when she came to the hospital after her water broke when she was 18 weeks pregnant. That has sparked a lawsuit from the American Civil Liberties Union. 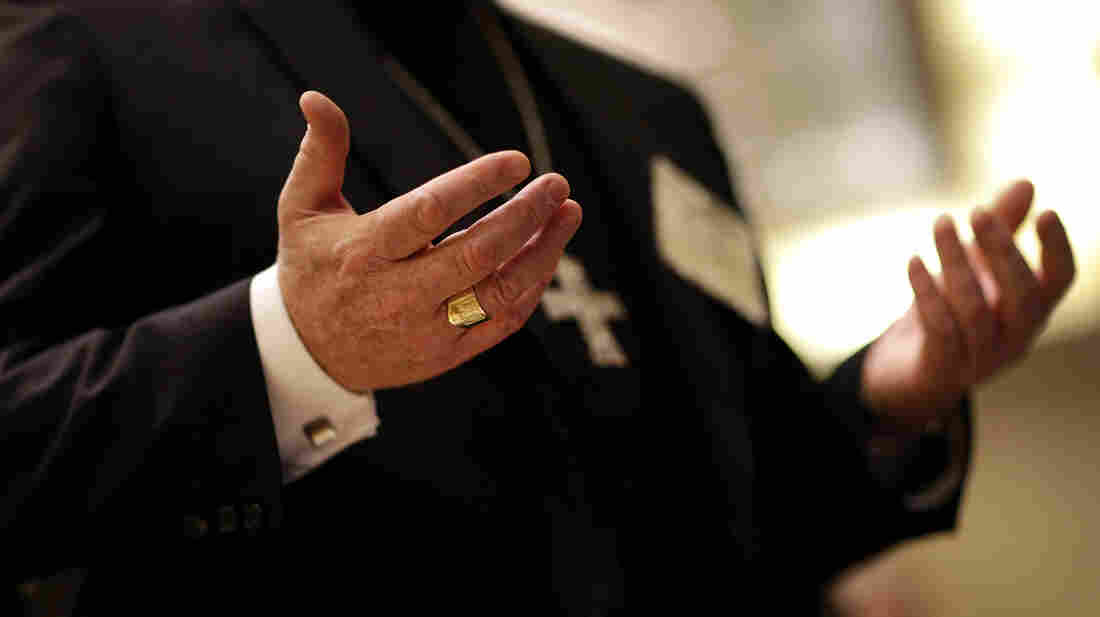 The American Civil Liberties Union has decided to go directly to the source of its unhappiness with the way women are treated in Catholic hospitals. It's suing the nation's Catholic bishops.

The ACLU and the ACLU of Michigan have filed suit in federal court in Michigan charging that the United States Conference of Catholic Bishops forces hospitals to deliver what amounts to substandard medical care.

Directly at issue are the bishops' "Ethical and Religious Directives for Catholic Health Care Services," which among other things forbid Catholic hospitals to perform abortions, even if the pregnant woman's life or health is at risk.

"It's about rules that tie the hands of doctors at Catholic facilities," says ACLU Deputy National Legal Director Louise Melling.

The case involves a mother of three from Muskego, Mich., named Tamesha Means. In December 2010, when she was 18 weeks pregnant, her water broke. A friend drove her to the nearest hospital, Mercy Health Partners, where she was told she was likely to lose the baby. But she was not told that the hospital would not do the therapeutic abortion she would get in a non-Catholic facility. She was given medication to stop contractions and sent home. She returned to the hospital later, bleeding, running a fever and in pain, and begged them to help her.

"And they proceeded on with, 'Well, you know, Tamesha, there's nothing that we can do to help you,' " she says. Means said she was unaware that it was a Catholic facility.

Eventually, as the hospital was preparing to discharge her again, she delivered the very premature infant, who died after a few hours.

Dr. Douglas Laube, a professor of obstetrics and gynecology at the University of Wisconsin, says the care she got did not meet basic medical standards.

"A woman who is 18 weeks pregnant and who presents with these symptoms, the same that Ms. Means had, should be told that there's virtually no chance that her fetus will survive and that continuing the pregnancy puts her at risk, and that the safest course of treatment would be to terminate the pregnancy," Laube says. "From the outset, Ms. Means should have been given this information at the very least."

This is hardly the first time a pregnant woman in a life- or health-threatening situation has run afoul of Catholic ethical and religious directives. In 2010, a nun who was the administrator of a Catholic hospital in Phoenix was excommunicated after she allowed an abortion to save a woman's life. And as more and more hospitals merge with or get taken over by Catholic facilities, the tensions continue to grow.

"It's clear to me that Mercy Health Partners neglected to treat Ms. Means according to basic medical standards, and as such prolonged her suffering and jeopardized her health," says Laube. "While we're all entitled to our religious beliefs, hospitals should not be entitled to impose their religious beliefs on patients and medical staff who do not share them."

The Conference of Catholic bishops declined to comment on the lawsuit. But others wonder about the idea of suing the bishops themselves for neglect.

"Yeah, this is a novel case," says Richard Garnett, a law professor at the University of Notre Dame.

While there's nothing new about suing doctors or hospitals, Catholic or not, Garnett says, "to sort of claim that it is negligence for the bishops to be issuing directives reminding Catholic hospitals what the church's teachings are with respect to things like abortion and sterilization are, that is a stretch."

And he wonders what future if any such lawsuits against the church may have.

"That seems to me to be adopting a strange notion of tort responsibility — that religious teachings become legal negligence," he said.

But Garnett wonders if the ACLU's real motive is less to win the case than to find a new way to bring attention to the continuing dispute between the church and advocates for women's health. And clearly it has won that round, at least for now.