Accessibility links
Expected Soon For New, Gentler Cure For Hepatitis-C : Shots - Health News The first in a new class of drugs that can cure the viral infection that is the leading cause of liver failure and liver cancer is poised for a marketing green light from the Food and Drug Administration. More than 3 million Americans have hepatitis C, but most don't know it. 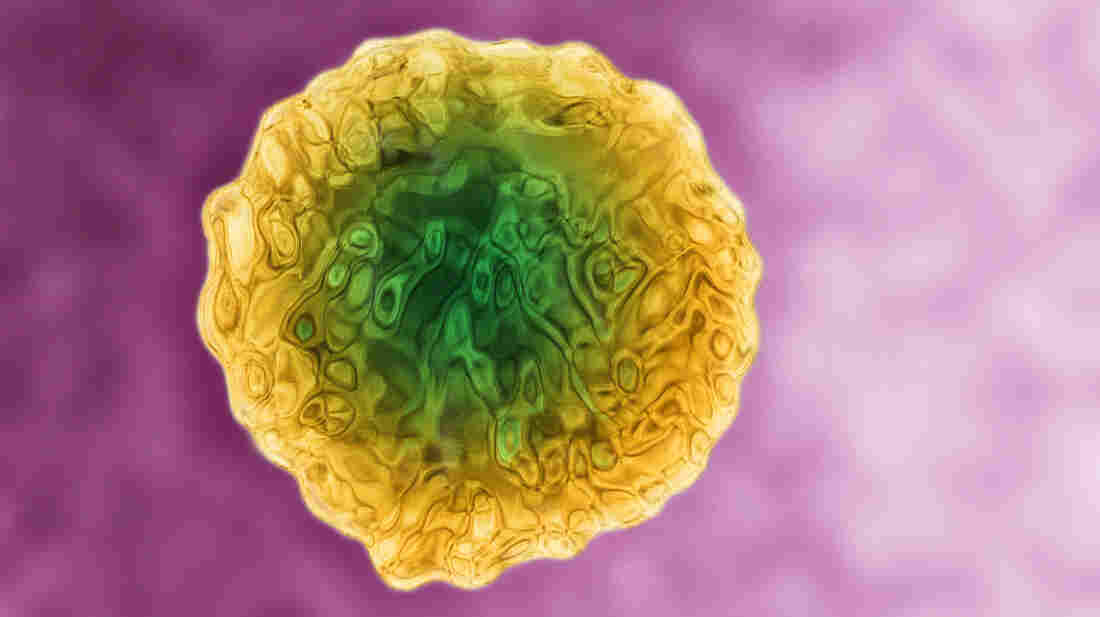 The Food and Drug Administration is expected any day now to approve the first in a new class of drugs that can cure the leading cause of liver failure and liver cancer.

The disease is hepatitis C, a slow-moving but deadly virus that infects more than 3 million Americans. The new treatment is a once-a-day pill that can cure at least 85 percent of victims without the need for injections of interferon, an immune stimulant that causes severe side effects.

The advent of interferon-free treatments for hepatitis C is an advance that's "about as hot as I've ever seen," says Dr. David Thomas, a liver specialist at Johns Hopkins University.

He says the new drugs are almost like curing lung cancer with only three months of once-a-day pills.

"That's kind of an exaggeration because lung cancer treatment is worse than what we used to do (to treat hepatitis C)," Thomas says. "But it's that kind of thing — where we did something that didn't work that much and hurt people a lot. And then we go from that to something that's ... really an amazing transformation."

The first of the new hepatitis C drugs is Gilead Science's sofosbuvir. It interferes with the virus' replication without much affecting cell metabolism. The drug won a unanimous recommendation for approval from of an FDA advisory committee last October for interferon-free treatment of two strains of the virus, in combination with the oral drug ribavirin. Agency approval is expected by Dec. 8.

The advisory panel also recommended approval of sofosbuvir for treatment of the most common and difficult-to-treat strain of hepatitis C, called genotype-1. But in that case, it needs to be used with interferon.

But other new hep-C drugs are in the pipeline, with approvals expected in late 2014 or early 2015. Some regimens may enable treatment of genotype-1 without interferon too.

"This is really a landmark shift in the treatment of hepatitis C," says Dr. Eric Lawitz of the Texas Liver Institute. "It's going to lead to a new generation of all-oral pills for all patients without the use of interferon, which is very tough for patients to take."

One of Lawitz's patients illustrates the potential. Over the past eight years, Henry Alameda, a 54-year-old carpenter who lives in San Antonio, endured two grueling six-month treatment regimens that failed to clear the virus from his blood. He thinks he was infected 20 years ago from the contaminated needle of an amateur tattoo artist.

The interferon side effects were hard to take. It's "like waking up with a bad cold," he says. "You would have to get under the blanket and you would start shaking. You would get real bad chills." Interferon, which is intended to get patients' immune systems to attack the virus, also commonly causes fatigue, nausea, diarrhea, anemia and depression.

Two years ago Alameda got into a study of sofosbuvir in combination with ribavirin. "It was like a miracle pill," he says. "It was just like taking an aspirin. I had no side effects at all." Some study patients have had headaches, fatigue, nausea, itching and weakness, but few have had to stop taking the pills because of side effects.

The new regimen worked for Alameda. Fifteen months after he finished taking the pills, there's no trace of the virus in his blood. Doctors have pronounced him cured.

The safety, effectiveness and low rate of side effects from the new regimens are expected to increase the number of hepatitis C patients who get treatment, although many doctors may hold off until other drugs are approved and combinations are tested in different types of patients.

The potential impact is huge. Hepatitis C infects up to five times as many people as HIV – another insidious virus that takes years to cause life-threatening disease. The U.S. Preventive Services Task Force says all Americans born between 1945 and 1965 should get tested for the infection – a population that includes 79 million baby boomers.

Thomas says the new treatments are coming at just the right time. Many baby boomers got infected decades ago – by experimenting with drug use, from blood transfusions or medical treatments that exposed them to contaminated blood, from things like tattoos and piercings. The virus can be transmitted sexually as well, although the evidence is controversial.

Now an increasing number of infected people are beginning to show signs of liver damage. Untreated, the virus causes progressive liver scarring and eventually cirrhosis that can require liver transplants. It's also the reason that liver cancer rates are increasing. Alcohol use greatly accelerates the damage.

But the new drugs won't come cheap. The price of sofosbuvir hasn't been set, but it's expected to cost around $90,000 for a course of treatment.

That's going to spark a lot of debate about who should be treated at what stage of infection.

But Johns Hopkins' Thomas says society should consider the cost of forgoing treatment. "If we fail to provide treatment to an expanding population of persons at risk of cirrhosis and liver cancer, then we'll have even greater costs," he says. "And they won't all be economic."