Accessibility links
To Get Kids Exercising, Schools Are Becoming Creative : Shots - Health News An NPR poll finds that most elementary school kids have physical education classes just one or two days a week. In response, parents and educators are getting kids to squeeze in walks, jogs and jumping jacks before, after and even during school. 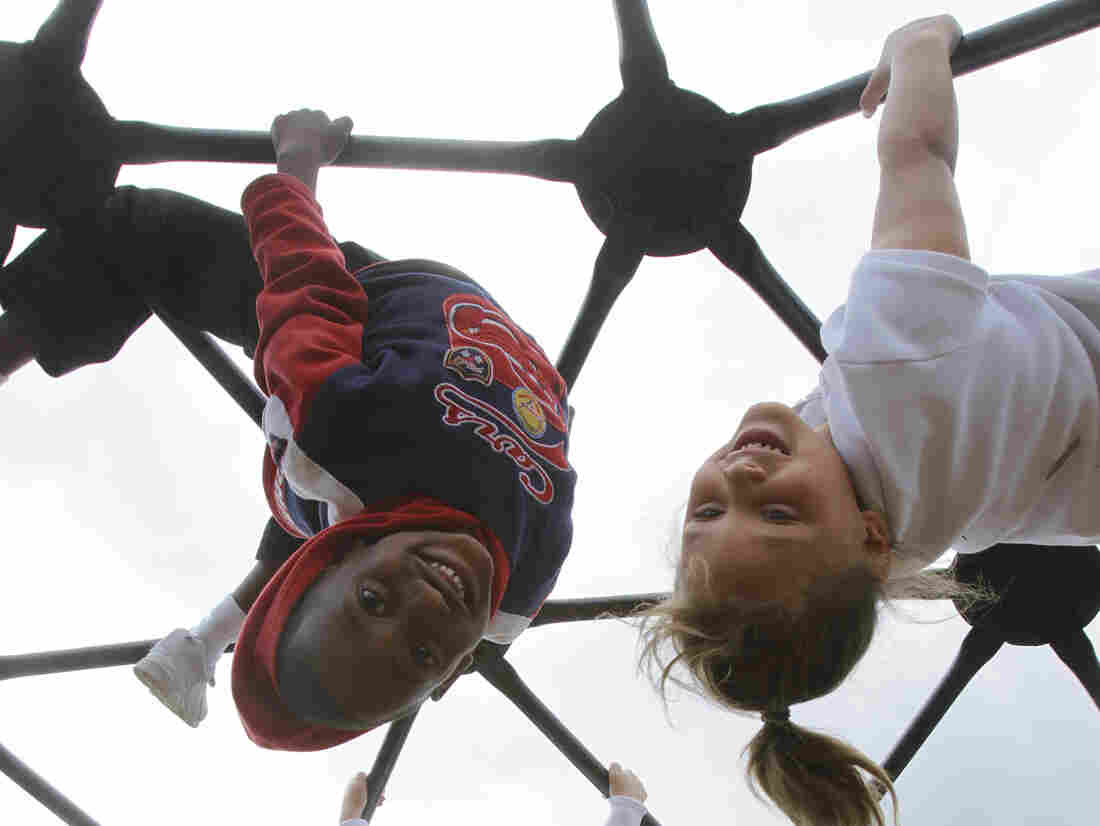 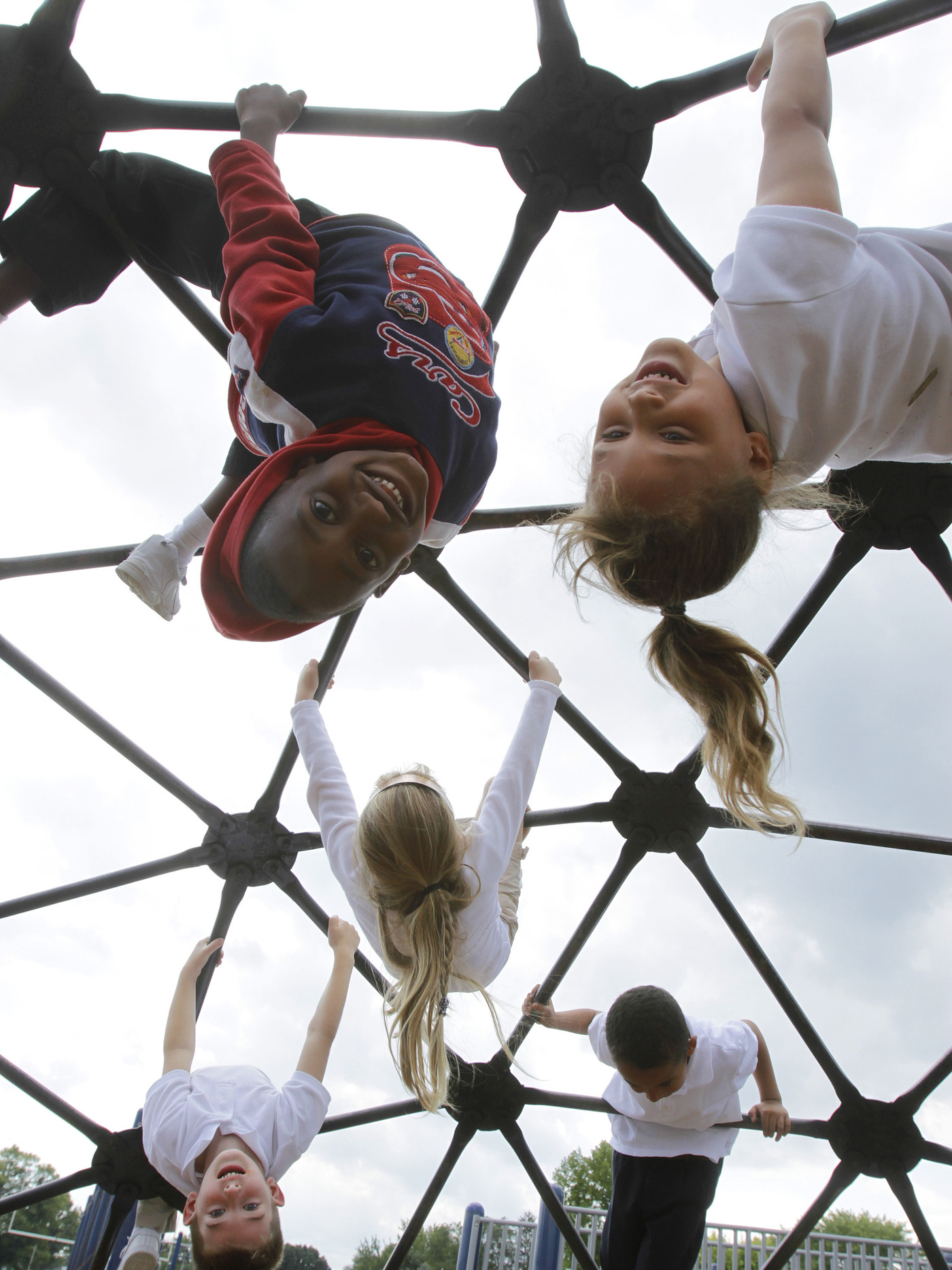 Students at Northeast Elementary Magnet, in Danville, Ill., play around. Fewer than 1 in 5 parents polled said their kids were getting physical education daily.

Avery Stackhouse, age 7, of Lafayette, Calif., says he wishes he had more time for phys ed.

"We just have it one day a week — on Monday." There's always lunch and recess, he says. "We play a couple of games, like football and soccer," he tells Shots.

But at Happy Valley Elementary, where he goes to school, recess lasts only 15 minutes and lunch is 45. Between eating and mingling, he says, "there's only a few minutes left where we play games and all that." 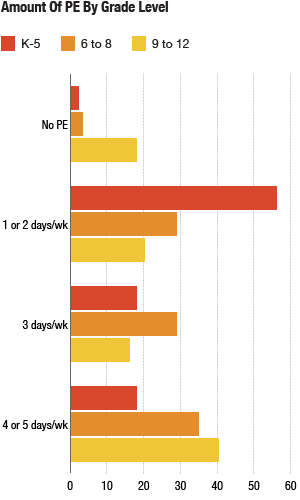 In a poll conducted by NPR, the Robert Wood Johnson Foundation and the Harvard School of Public Health, parents reported that their kids aren't getting nearly as much time in phys ed classes as is recommended. NPR hide caption

Fifty-six percent of parents say their elementary school kids are getting just one or two days of physical education a week, according to a poll NPR conducted in partnership with the Robert Wood Johnson Foundation and the Harvard School of Public Health.

Fewer than 1 in 5 parents with children in kindergarten through fifth grade said their kids were getting physical education daily.

Yet the Centers for Disease Control and Prevention recommends that K-5 students get at least 150 minutes a week. Physical activity has a lot of benefits, from reducing obesity to helping kids do better academically.

Louisiana State University's Russ Carson, an exercise researcher, tells Shots the poll results don't surprise him. "This has been going on for years, unfortunately," he says. School administrators can only fit so many things into a day, and often, he says, "testing and other aspects of education take precedence over physical education."

More and more, Carson says parents and educators are starting to "think beyond the gym walls," and come up with ways to fit in exercise before or after school. One idea is to have teachers integrate physical activity into math and reading lessons.

At Wildwood Elementary in Amherst, Mass., kids are required to take a morning walk between the time buses drop them off and classes start.

Rebecca Spencer, whose 5- and 7-year-old daughters attend Wildwood, says it's a good way for the kids to fit in some more exercise. "They only get [physical education] once a week, and it's for an hour. So it's very brief," Spencer tells Shots.

The school has also organized what it calls a jog-a-thon for the older kids. Students can run laps around the playground to earn points, and the school keeps track of all their miles to see how far they've run collectively run.

And these school-wide initiatives are a good way to get every student to exercise, Spencer says. "Some people think of recess as a time for physical activity," she says. "But there's actually nothing to make sure these kids are being physical during that time." Having some structured P.E. classes at school is important, she says.

Spencer, a neuroscientist at the University of Massachusetts, says she's well aware of the physical and cognitive benefits that kids get from being active. "The physical education is giving them some of the motor skills that they need," she says. But, she also says she understands that the school doesn't necessarily have the resources to provide more P.E. classes.

"Exercise — any exercise — is great for brain development," she says. "Most of the studies that have been done that show how the brain develops through exercise actually don't use any special form of exercise," she says. "They typically use just treadmill walking."

That seems to indicate that even a even simple walk around a track can do kids a lot of good.