Accessibility links
Epilepsy Patients Help Decode The Brain's Hidden Signals : Shots - Health News When doctors stick electrodes into the brain of a patient with epilepsy, they're hoping to find a cure for debilitating seizures. But they're also exploring a still-mysterious landscape. And they couldn't do it without a patient willing to help. 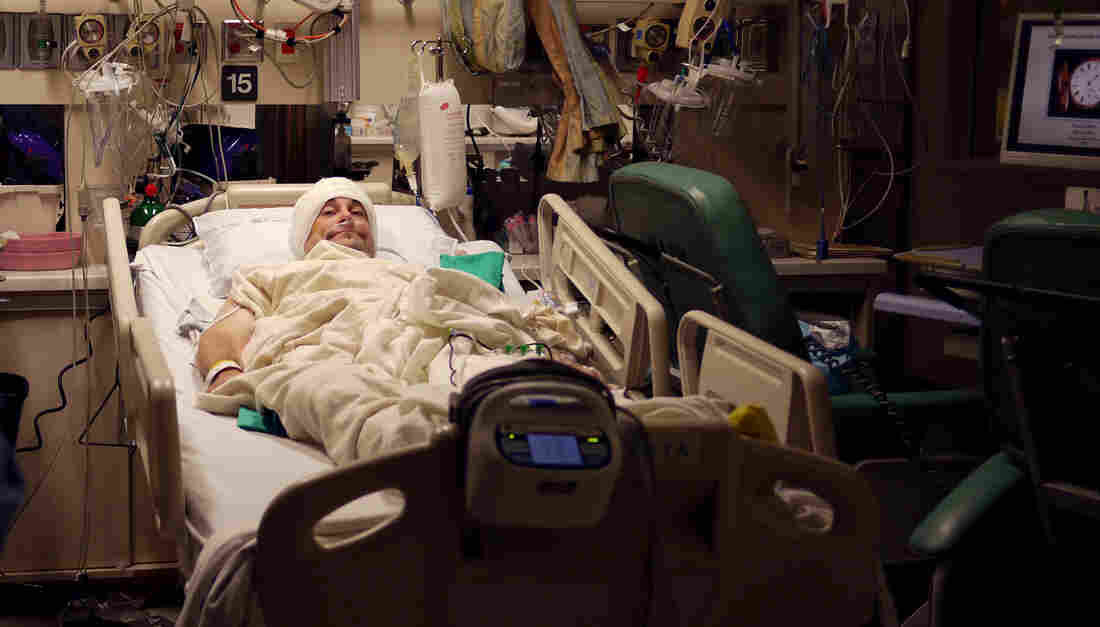 Nate Bennett, 41, agreed to have electrodes implanted in his brain in an effort to identify the source of debilitating seizures. Amy Standen/NPR hide caption

Patients with severe epilepsy are giving scientists the chance to see the human brain in action, a view they could never get with an MRI or other high-tech tools.

By applying small jolts of electricity to the brain, they're able to wipe out a person's ability to recognize faces, to spark hallucinations, or even induce a will to persevere, as researchers reported last week.

None of this would be possible without patients like 41-year-old Nate Bennett of Santa Cruz, Calif. He's had epilepsy since he was a teenager, and it's getting worse, to the point where he worries that he'll lose his job as a restaurant manager. 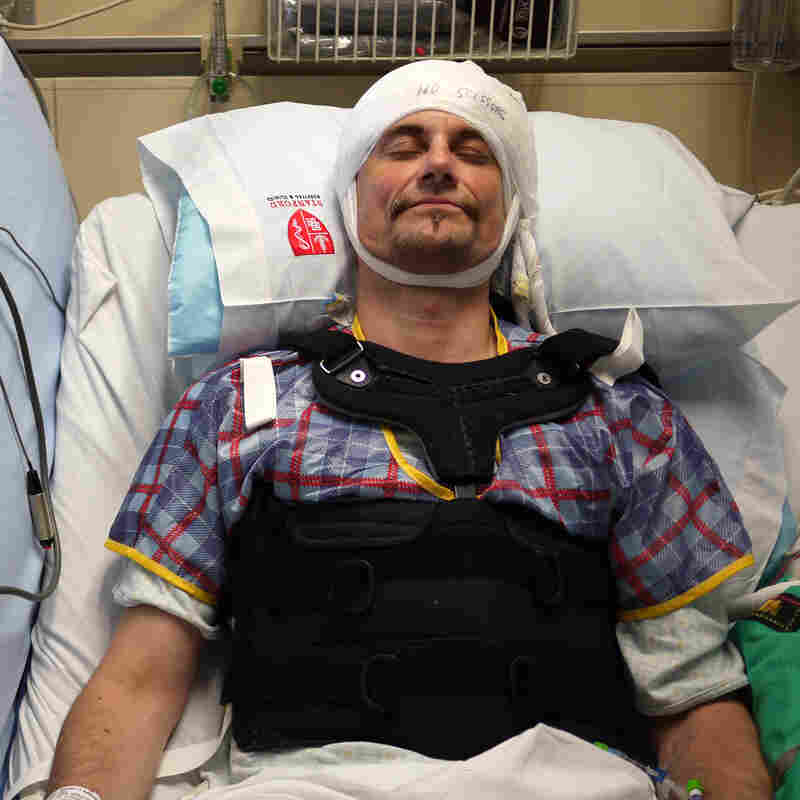 Scientists say that epilepsy patients like Bennett have helped them learn how the brain controls movement and emotion. Amy Standen/NPR hide caption

In his back pocket, Bennett carries around a black leather wallet about the size of an envelope, attached to a key chain. He made it himself. His teeth have left deep scars in the leather. That's a good sign: It means he had time to prepare.

"If I'm conscious and I feel the seizure starting, I warn people around me what's going on," he says. "I lay down on the floor and I put this in my mouth. That way when I wake up, I may not have bitten my tongue."

Bennett has one or two grand mal seizures a month, sometimes in the middle of the workday. He's unable to drive and worries about having to go on disability and losing his health insurance. Medication isn't helping.

That makes Bennett a potential candidate for surgery to remove the part of his brain that's causing the seizures, and possibly cure his epilepsy.

The first step is to find out whether his seizures originate in a specific place in the brain, and if so, whether that's a part of the brain that could safely be removed.

Back in August, Bennett underwent surgery to implant electrodes in his brain at Stanford University Hospital in Palo Alto. The electrodes are designed to read his brain's electrical activity, including the electrical storms that cause his seizures.

Waking from anesthesia, Bennett was groggy but gave a visitor the thumbs-up. "I'm putting reality back together here ... gradually," he says with a smile.

A doctor tells Bennett that while he was unconscious, a surgeon implanted seven wires in his brain — two in the right hemisphere and five in the left. Each is a bit thicker than a human hair and extends about 1½ inches into his brain.

"What a party," Bennett replies wryly.

Bennett will spend a week or more in the hospital. To keep himself occupied, he's brought a bag of musical instruments and a copy of Siddhartha, by Hermann Hesse. 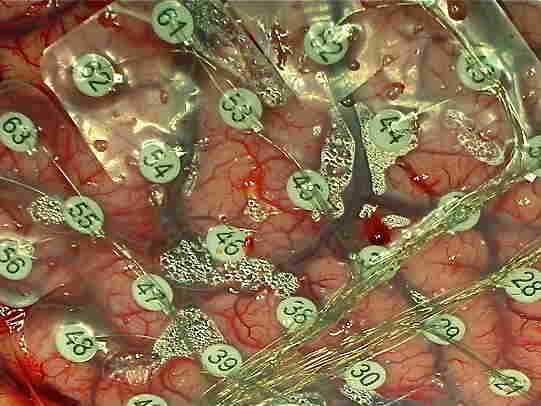 Surgeons use a grid of electrodes laid on a patient's brain. They record electrical activity and can deliver a tiny jolt. Courtesy of Dr. Josef Parvizi hide caption 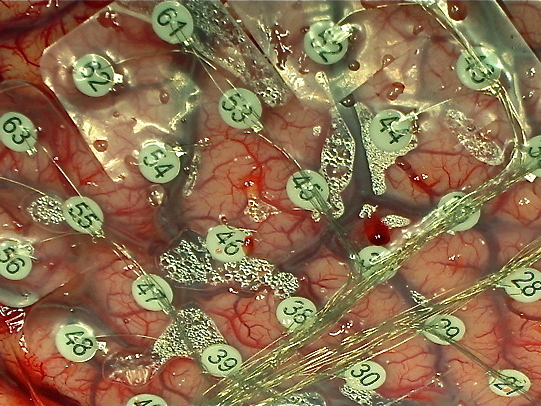 Surgeons use a grid of electrodes laid on a patient's brain. They record electrical activity and can deliver a tiny jolt.

A few days after the electrodes were implanted, Bennett welcomed visitors into his hospital room. His head is wrapped in bandages. A thick braid of wires hangs from his left temple.

At the bedside is Dr. Josef Parvizi, an associate professor of neurology at Stanford University and Bennett's doctor. Today, Parvizi is going to send tiny jolts of electricity along the electrodes and into Bennett's brain.

To be clear, this is completely painless. But very strange things happen when you stimulate the brain this way.

One of Bennett's electrodes is located in the dorsal anterior cingulate, a part of the brain associated with automatic speech, like saying "ouch" or "whoa." Parvizi sends a small 4-milliamp jolt there.

The notion that epilepsy offers a window into the brain has a long history.

In the 19th century, English neurologist John Hughlings Jackson observed an epileptic seizure that seemed to travel from one part of his patient's body to another.

To Jackson, this revealed that the disease was affecting parts of the brain in succession, each with a corresponding effect on the body. This phenomenon is still called the Jacksonian March.

"Epilepsy gave us our first clue that parts of the brain are responsible for parts of the body, or for different senses," says Dr. Edward Chang, a neurologist and neurosurgeon at the University of California, San Francisco, whose work with epilepsy patients has led to key findings about how humans process speech.

In the 1960s, a Canadian epilepsy specialist named Wilder Penfield found that by stimulating certain parts of the brain, he could make people move their hands involuntarily, or report a smell of burning leather.

Parvizi is one of a handful of neuroscientists who have picked up Penfield's torch, showing that brain regions correspond not just to body parts or senses, but to emotions.

"It was more of positive thing," the patient says, "like, 'Push harder, push harder to get through this.' "

The patient's heart begins to race. Parvizi asks him to describe how he feels.

"I started getting this feeling like I was driving into a storm," the man says. "As if one of the tires was half flat, and you're only halfway there. There's no way to turn around and go back. You have to keep going forward."

Parvizi asks, "Was this negative or was it positive?"

This is the part that's most interesting to Parvizi and his colleagues, because while the patient clearly feels a sense of danger, he feels something else, too: a determination to get through it.

"It was more of positive thing," the patient says. "Like, 'Push harder, push harder to get through this.' "

When the anterior midcingulate cortex is stimulated, Parvizi says, patients "have the will to go towards the storm" and fight, "rather than giving up, being scared, depressed and running back."

This study, which was published last week in the journal Neuron, lines up with other research on the area of the brain known as the "salience network," says coauthor Dr. Michael Greicius, an assistant professor of neurology at Stanford University.

"Over the last 20 years or so we've started to get this sense for a network that's constantly scanning the environment and manipulating the internal environment," Greicius says. It does that by adjusting heart rate and blood pressure, reducing blood flow from the gut, and "generally shifting [the body's] resources from what's less urgent to the task at hand."

"That's the beauty of evolution, right?" says Parvizi. "If you really are going to go through difficulty, you'd better have higher blood pressure so your muscles can get the blood and run or fight."

This illustrates the great debt that neuroscience owes to patients like Nate Bennett, says Dr. Orrin Devinsky, a professor of neurology at NYU's School of Medicine.

It is one thing, Devinsky says, to study the brain through MRI scans or animal models. It's another thing to zap a specific part of the brain and be able to ask the patient to describe what happens.

"We only use these electrodes if there's a clinical application," says Devinsky, "but once they're in, we have this incredible scientific opportunity."

But for now, the goal is to solve the problem of Bennett's epilepsy, starting by figuring out where his seizures are coming from.

Back at the hospital in August, Parvizi flips a switch and a jolt of electricity enters Bennett's brain.

"I feel a change," warns Bennett. "I might have a seizure."

Bennett's face hardens. His eyes fix on some invisible spot across the room. He's having a seizure. This is a good thing. The electrodes implanted in his brain have recorded exactly where it came from.

But further testing reveals that there is not just one source of Bennett's seizures, or even two. Instead, they come from points spread out across his brain. So he's not a candidate for surgery to stop the seizures.

This was disappointing, Bennett says. But being part of a scientific experiment was a silver lining.

"For me, I'd like to see something positive come out of it all, even if it's for somebody else. You know?" he says, after the electrodes were removed and he was back at work.

And his exploration isn't over, Bennett says. A new epilepsy device called the NeuroPace — kind of like a pacemaker for the brain — recently got FDA premarket approval.