Accessibility links
HIV Treatment Keeps A Family Together And Growing In Kenya : Shots - Health News When a Kenyan woman was diagnosed with HIV, she thought it meant the end of her marriage and her hopes to have children. But with the help of HIV therapy, Benta Odeny not only protects her husband from the virus, but she also has a healthy, HIV-negative daughter. 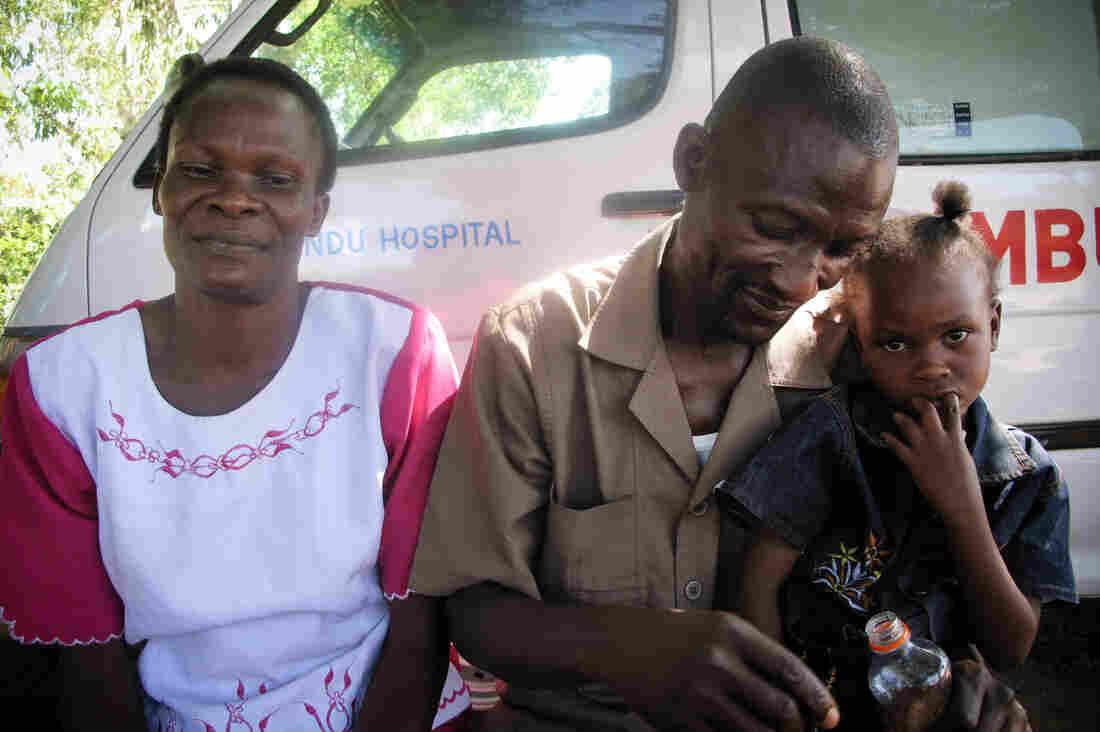 When Benta Odeny was diagnosed with HIV, she started to protect her husband Daniel from the virus by taking antiretroviral medications. The same drugs also helped her give birth to an HIV-negative daughter, Angelia. Gregory Warner/NPR hide caption

Daniel and Benta Odeny married late by African standards: Both were in their 30s. And they'd only just hit their third anniversary when Benta started coughing blood.

The cough lasted a couple of weeks. So Benta went to the doctor. She had HIV. But Daniel was still HIV negative.

"She thought it was the end of the world," Daniel says.

Benta thought that Daniel would leave her and she would die alone. She had seen it happen many times to other women in her situation.

Benta and Daniel live near Lake Victoria in Kenya, a region that has one of the highest HIV rates in the country. More than 1 in 6 people are infected with the virus.

But times have changed in Kenya in the past few years. In particular, HIV drugs are now vastly more accessible in the country, in large part because of a U.S.-funded initiative aimed at fighting AIDS around the world.

Over the past decade, the President's Emergency Plan for AIDS Relief, or PEPFAR, has invested billions of dollars to treat HIV-positive people in developing countries. In 2013, the initiative spent $529 million in Kenya alone.

So when Benta told her husband Daniel about her status, he could reasonably say, "This isn't the end."

"I told her, 'No, don't even bother thinking where you got the virus,' " Daniel says. " 'Be focused. You have a future. Work toward that.' "

"So that means that I have to protect him," Benta says. "And he also can protect me."

"What we've learned is that treatment is effective prevention," says Dr. Kevin De Cock, who directs the global health program at the U.S. Centers for Disease Control and Prevention.

As long as an HIV-positive person suppresses the virus in their immune system with medication, De Cock says, he or she has little chance of spreading the disease — even through unprotected sex. "We know that the risk of transmission is infinitesimally small," he says.

Still though, most health workers are cautious about telling couples to throw away the condoms. "Most people would say, 'Well, other things can happen: Adherence isn't always perfect et cetera,' " he says. "But in truth, the risk of transmission is greatly, greatly reduced [with medication]."

Studies, both in the lab and out in real communities, have supported this idea. PEPFAR funded many of these studies, De Cock says.

"The overriding aim of the PEPFAR program is to achieve an AIDS-free generation," De Cock says.

Many health researchers always thought that the road to no new HIV infections would be forged through the long slog of culture change.

But science has suggested a potentially shorter path: Getting millions more HIV-positive Africans on HIV drugs.

Couples like Benta and Daniel, where one is positive and the other is not, are critical to this strategy. There's even a special term for these couples — discordant.

Medical workers are extremely interested in discordant couples for two reasons. One is that almost half of new infections in Kenya happen in these relationships. It's one place where HIV is spreading.

The second reason is that when couples are open with each other about their HIV status, managing HIV is more successful.

That was the case with Daniel and Benta.

After Benta's diagnosis, Daniel started calling her up from work to remind her to take her pills. Benta not only got her health back, she got something she and Daniel always wanted: a daughter.

With the help of prenatal counseling and HIV treatment, Benta gave birth to a healthy, HIV-negative daughter four years ago.

Increasingly, Benta is what health workers hope for as the new face of AIDS in Africa: An HIV-positive person living happily with her HIV-negative spouse and child.

The World Health Organization now recommends that any HIV-positive individual in a discordant relationship be supplied HIV treatment.

But discordant couples are still being treated on an ad hoc basis in Kenya, primarily because the funding for the medication just isn't there.

Making it official policy to treat thousands more HIV-positive people to protect all their spouses is going to take a lot more money. And the U.S. government and PEPFAR aren't offering it up anytime soon.

"We don't know what's coming for 2014" in terms of funding, says Katherine Perry, who coordinates PEPFAR's efforts in Kenya. "We haven't been given our funding level, but we are definitely not receiving more money."

The question of which Africans get treatment isn't just a medical one, she says. It's a resource issue.

"In the U.S., anybody who is HIV positive, they're going to go on treatment," Perry says. "Here in Africa, it's very different."

In Africa, the American taxpayer is largely paying for it. And now it's unclear just how much the U.S. is going to pay going forward.

U.S. officials have said that now it's time for African governments to start picking up the slack. Kenya, for example, only pays for 2 percent of their more than $500 million AIDS budget.

Informally, the Kenyan government has indicated they will make it a policy to treat discordant couples. But it's unclear when that will start or where the money will come from.

"It's a big move," Perry says. "And of course Kenya, like all countries, would like to adopt these guidelines. It may be a staged approach."