Accessibility links
Healthful Habits Can Help Induce Sleep Without The Pills : Shots - Health News More and more people are using sleeping pills, but they can have side effects, including dangerous drowsiness the next morning. Sleep specialists say the best way to get a good night's sleep is to have a sleep routine, including going to bed at the same time each night. 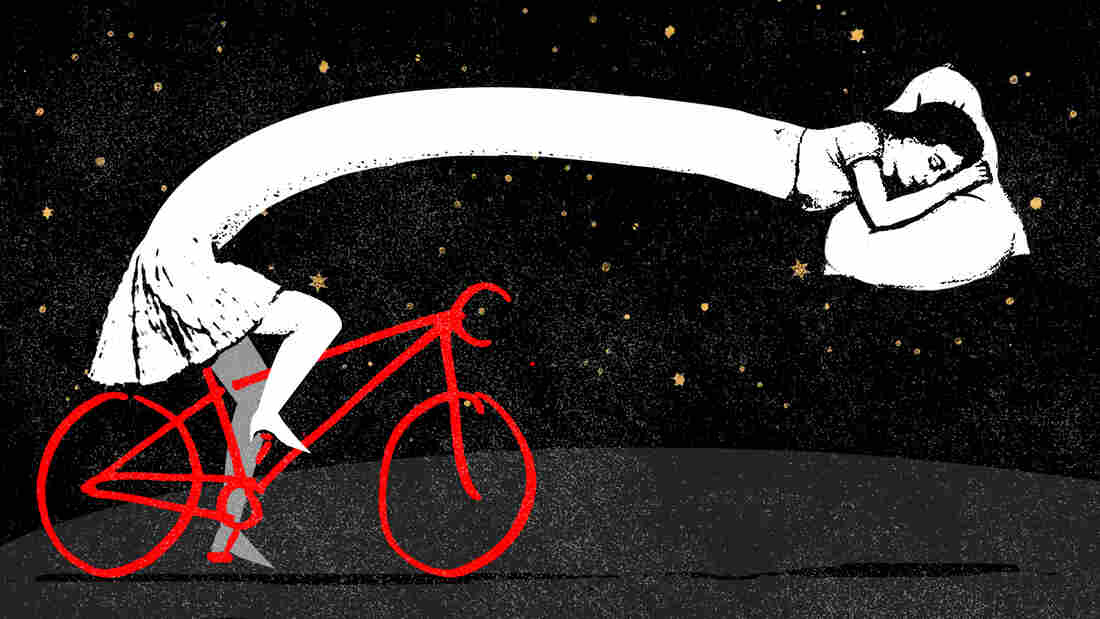 About one-third of American adults say they have problems falling asleep. And prescriptions for sleeping medications are on the rise, with about 4 percent of people using the drugs, according to the Centers for Disease Control and Prevention.

But sleep specialists say people should exercise caution before deciding to take medication to help them sleep.

Take the case of Nancy Sherman, a woman in her 60s who lives in Seattle. Sleepless nights started about four years ago when she lived directly above an "end of the line" bus stop. "The buses would leave their motors on all night long, and I developed insomnia just listening to all that noise," she says. Dozens of emails to officials didn't help. So Sherman went to see her doctor, who prescribed the most popular prescription sleep medication, zolpidem.

Sherman started taking the pill, which is sold as Ambien, Sublinox and other brand names. The first night, she fell asleep at her computer, waking up with her hands still on the keyboard.

The second night, she awoke in the morning to a pile of potato chips strewn across her bed. "I must have gotten up and eaten a whole bunch of potato chips," she says. "I had no recollection of that at all."

But most bizarre of all was the night when she appears to have cooked in her sleep. "I woke up the next morning and came into my kitchen, and my kitchen was absolutely full of dishes, pots, pans, sour cream, hot sauce, jalapeno peppers, grated cheddar cheese. I'd had this Mexican food bonanza, apparently."

Sherman says she's willing to put up with these experiences in order to get a good night's sleep. And sleep experts say they're rare. But sleeping pills can act quickly and unpredictably.

"I tell everybody that I prescribe a sleeping pill to that they should take it in bed," says Dr. John Winkelman, a psychiatrist in the sleep disorders clinical research program at Massachusetts General Hospital in Boston. "Why? Because if they are doing a load of laundry or if they're on email and the medicine abruptly takes effect, and they may not even recognize it at the time. Then they could act in ways that they'll regret afterward."

Most sleep medications work by binding to receptors in charge of thinking. So cognition is slowed, coordination interfered with and memory impaired. The medication is "working in all different parts of the brain, in many different systems and in particular on the system that is most important for inhibition," says Winkelman.

Health officials also worry that medication levels can remain high enough in the blood that people can have trouble driving the next morning. Earlier this year, the Food and Drug Administration ordered companies that make zolpidem to cut the recommended dose for women in half because they metabolize the medication more slowly than men and it stays in their bodies longer.

While there's no evidence that sleeping pills are addictive, Winkelman says people can become psychologically dependent on them. "They weren't sleeping before they started it, and now they can sleep with it, and they start to rely on this idea of reliable sleep," he says.

That's what happened to Lori Peters, a woman in her 40s who lives in Thousand Oaks, Calif. She was under a lot of stress, couldn't sleep and started taking zolpidem. But she soon felt she was relying on it too much. "I didn't want to be taking anything, quite honestly. I just wanted to be able to fall asleep. My husband says 'good night' and he's gone. I'm like 'aarrgggh — I can't believe you!' "

Peters stopped taking sleeping pills and started changing her habits. She stopped eating late in the evening. And she decided on a fairly rigid bedtime.

"My husband and I go to sleep pretty much the same time every night, and we wake up at the same time every morning, even on weekends," she says. "We try to have a rhythm." That means getting up at 5 a.m., when they enjoy getting out to exercise and walk the dogs.

Peters also turns off her computer a couple of hours before bedtime. She doesn't want the extra stimulation and opts instead to read. "I find reading is really relaxing for me," she says. "It helps me stop twisting things around in my mind."

In the end, Peters achieved her goal; she's sleeping well without medication. And it turns out that the changes she made are exactly what sleep experts recommend: a routine bedtime that cues the body when it's time to sleep.

"We want [people] to have a cool, dark, quiet sleep environment," says Dr. Nathaniel Watson, a neurologist and co-director of the University of Washington Medicine Sleep Center in Seattle. He's also an official with the American Academy of Sleep Medicine. "We want it to be devoid of screens. No televisions, computers, things like that."

People should have regular sleep and wake times on weekdays and weekends, Watson says. "Having a rhythmicity to sleep and wake patterns is crucial to having healthy sleep."

And healthful sleep is critical for both physical and mental health. That's why sleep experts recommend people consult with their doctor and weigh the risks and benefits of sleep medication.