Accessibility links
Mixing It Up 50,000 Years Ago — Who Slept With Whom? : Shots - Health News The DNA from a 50,000-year-old Neanderthal bone found in a cave in Siberia is more evidence that genetic mixing took place among Neanderthals and other hominid groups. One researcher hopes to use such evidence to help compile a catalog of the genetic changes that make modern humans unique. 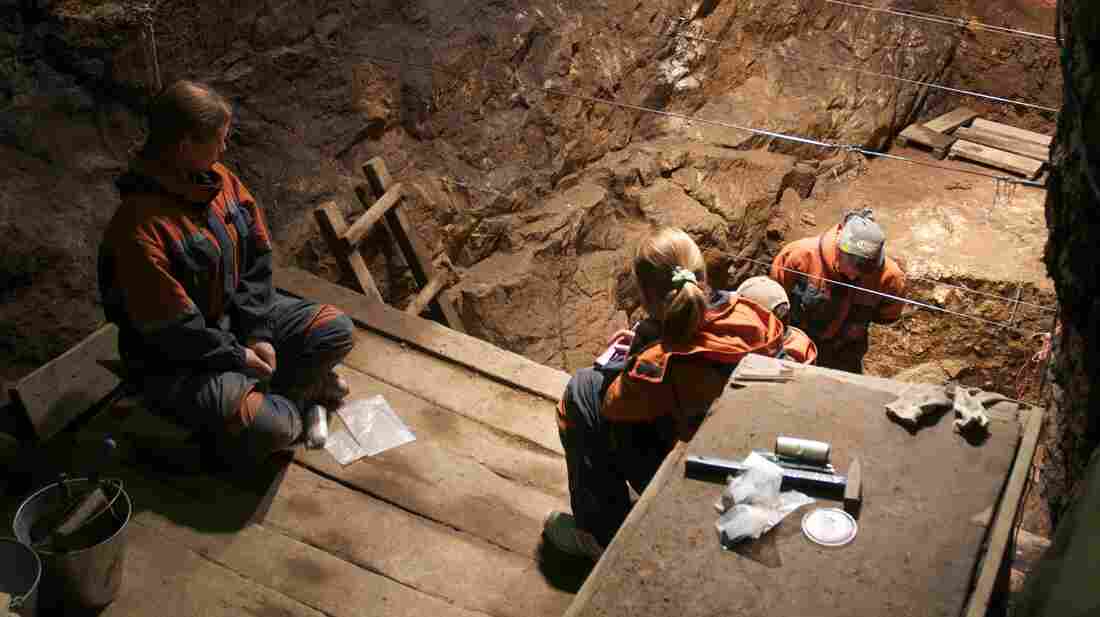 Research excavations like these in Siberia's Denisova Cave are yielding clues to the mating choices of early hominids. Bence Viola/Nature hide caption

In a remote cave in Siberia, scientists have found a 50,000-year-old bone from a toe that tells a story about life — and love — among some of the earliest humans.

They did it by analyzing DNA from that bone.

Back in 2010, scientists stunned the world by retrieving recognizable DNA from a Neanderthal bone that was tens of thousands of years old. They compared it with modern human DNA, and — what do you know? There's some Neanderthal DNA in many of us. Apparently, we Homo sapiens occasionally interbred with our primitive cousins.

Since then, the plot has thickened. 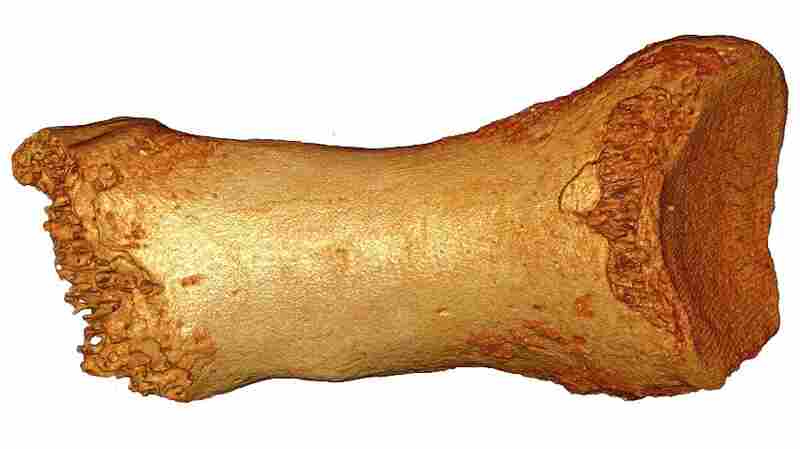 DNA from this ancient toe bone, discovered in a cave in Siberia, was traced to Neanderthals and at least one other newly identified group of early hominids — the Denisovans. Bence Viola/Nature hide caption 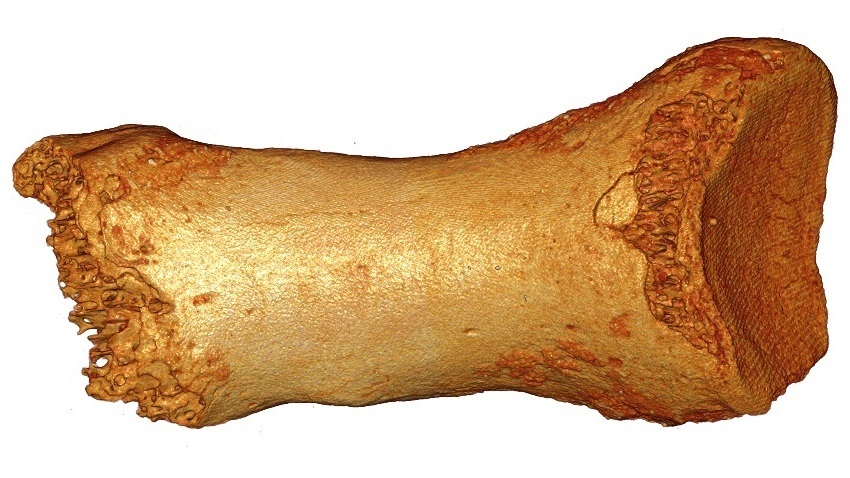 DNA from this ancient toe bone, discovered in a cave in Siberia, was traced to Neanderthals and at least one other newly identified group of early hominids — the Denisovans.

Scientists subsequently found a finger bone from a place called the Denisova Cave, in Siberia. They thought: Neanderthal. But no, it wasn't Neanderthal. Nor was it from a modern human, H. sapien. It was from some previously unknown but close relative. The scientists called them the Denisovans, a third kind of early human, whose DNA had been analyzed. And we know almost nothing about them.

So now comes yet another bone fossil — a toe from the same cave. It's from a female Neanderthal this time. And all the DNA is still there. It shows that her ancestors also interbred with Denisovans.

Svante Paabo, from Germany's Max Planck Institute, leads the scientific team. "It was a general pattern," he says. "There were a lot of cases of mixing. Not only that modern humans had a tendency to mix with the people they met when they spread across Eurasia, but these now extinct groups also mixed with each other — and [with] other groups."

So, apparently, when it came to our ancient ancestors and their relatives, we weren't too particular about mates. Says Paabo: "There was some degree of promiscuity around."

Geneticists found something else curious about this Neanderthal's DNA: There were patterns in its chemical structure that came from something quite different from either Denisovans or modern humans. Apparently, in the deep past, Neanderthals bred with some other mystery species — perhaps Homo erectus.

Now, H. erectus evolved about 2 million years ago. As a species, it lived long enough to share parts of the planet with Neanderthals and Denisovans. But sharing its bed, so to speak? As team member Montgomery Slatkin notes, it was a pretty primitive creature.

Slatkin, a geneticist at the University of California, Berkeley, says the pattern of DNA from this 50,000-year-old woman also suggests that her family was inbred. Her parents were genetically close enough to be half-siblings — or, perhaps, an uncle and a niece, or an aunt and a nephew.

"And that suggested to us that this was a rather small population," Slatkin says, "because that meant that close relatives had no choice but to mate with each other."

Writing in the current issue of the journal Nature, the team reports that small groups of Neanderthals and Denisovans apparently met and reproduced in Eurasia. When modern humans arrived from Africa about 40,000 years ago, they joined the party.

Paabo says this DNA research isn't just about who slept with whom. He hopes to compile a catalog of "all the genetic changes that make modern humans unique" — a catalog that should prove a fascinating resource for further research.

One such future experiment, says Paabo: using ancient DNA to engineer Neanderthal-like cells to see how they differ from ours.