Accessibility links
Congress Poised To Permanently Fix Its Medicare Payment Glitch : Shots - Health News After a decade of kicking the ball down the road, Congress appears ready to repeal its payment formula for Medicare and replace it with a whole new system. This time, doctors would be paid according to the quality of results they produce, rather than the number of services they provide.

The two-year budget deal approved by the Senate on Wednesday is aimed at preventing another government shutdown. 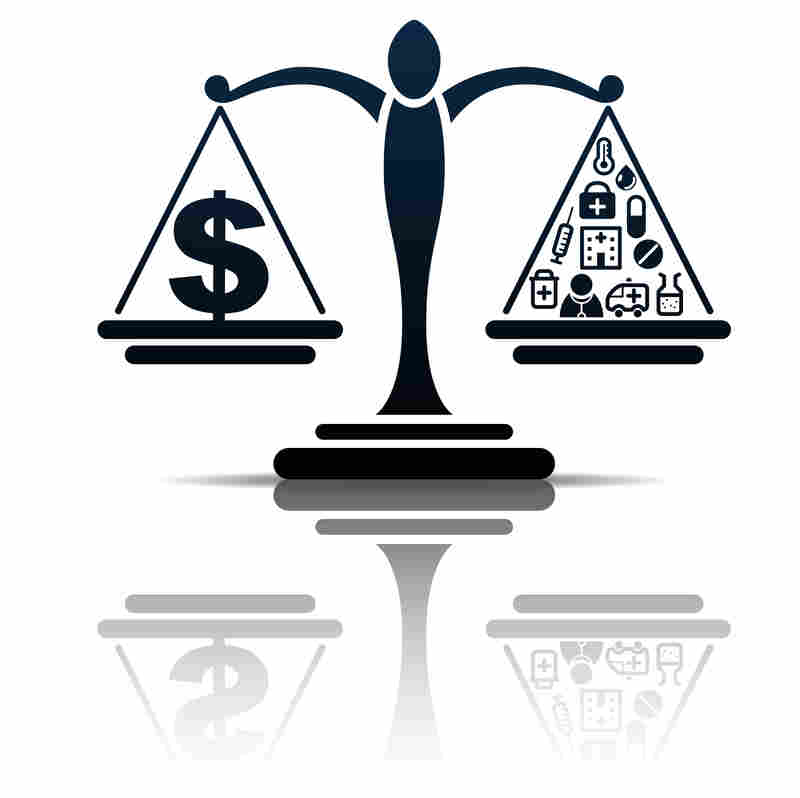 It's health results — not the number of treatments — that should count, leaders say. iStockphoto hide caption

It also includes a familiar annual rider — language to avert a steep pay cut to doctors who treat Medicare patients. But this time might be different, with a fix that lasts. After more than a decade of temporary solutions, it appears Congress might be on the verge of permanently solving its persistent problem in the way it makes Medicare payments to doctors.

The problem was actually created by Congress itself, back in 1997, through a flawed formula called the Sustainable Growth Rate, or SGR. And every year since 2002, when the formula first began calling for cuts, the SGR has created political and fiscal fits for lawmakers.

"The SGR has threatened to make draconian cuts to physician payments — cuts that could cause seniors to lose access to their doctors," said Senate Finance Committee Chairman Max Baucus, D-Mont. "And every year, Congress has had to spend more time and money to pass temporary fixes."

Indeed, the so-called Medicare doc fix, unlike the Affordable Care Act, is one of the few health issues that has enjoyed near unanimous bipartisan agreement. Neither Republicans nor Democrats have had the stomach to allow cuts in pay that, in recent years, would have topped 20 percent. Yet no matter which party has been in charge, the annual — and sometimes monthly — exercise to cancel the cuts has been painful.

"Since 2003, we've had to patch the SGR 15 times, at a total cost of $150 billion," said Sen. Orrin Hatch of Utah, the Finance Committee's ranking Republican.

The current patch cancels a scheduled 24 percent cut in doctor pay — at a cost of around $7 billion. And that's just for three months. But that's because this Congress that's now famous for doing almost nothing is poised to do something significant. It appears ready to repeal the flawed payment formula and replace it with a whole new system — one that pays doctors according to the quality of results they produce rather than the quantity of services they provide.

"I'm optimistic; we're optimistic," said Ardis Hoven, the president of the American Medical Association, which has led the charge to fix the formula almost since its inception.

"I think the prospects of repealing the SGR and replacing it with an appropriate payment mechanism are very good," she said. "And members of Congress understand this, and understand the need to move ahead."

Indeed, all three committees in the House and Senate that oversee the Medicare program have now approved such legislation. The House Energy and Commerce Committee approved a bill last summer; and the House Ways and Means and Senate Finance committees followed suit just last week. In the normally more partisan House of Representatives, the votes on the bills were approved unanimously.

Why Hiking The Age For Medicare Eligibility Wouldn't Save Much

Still, it's not yet a done deal. For one thing, while physician groups are united in their opposition to the current payment system, they don't all agree on the details of the bills that are emerging. The bill approved by the Senate Finance Committee, for example, has drawn the opposition of the American College of Surgeons.

One big problem is that the bill would freeze physician pay at its current level for the next decade.

"To really ... send the message to physicians that things are going to be frozen for 10 years doesn't seem like an appropriate policy issue," said David Hoyt, the group's executive director.

But even more troubling, Hoyt said, is that the bonuses some doctors could earn under the proposal for performing well would come at the expense of other doctors — even if those doctors perform well, too.

It might reduce a physician's incentive to share best practices with others, and to work toward improving care together, Hoyt said. "And we don't think that's a good policy at a time when we're trying to get more consistency in care."

Even if those issues can be worked out — and most people think they can be — there's another thorny issue involving how to pay the estimated $116 billion to $136 billion cost of eliminating the SGR. The difference depends on whether fees are frozen over the next decade. Most of the previous doc fee fixes — including the one in the budget bill passed Wednesday — have been paid for by cutting payments to other Medicare providers, usually hospitals.

But Chip Kahn of the Federation of American Hospitals said that while hospitals strongly support a permanent repeal of the SGR, his industry is tired of being the piggy bank.

"If that has to come from other providers, where we see robbing Peter to pay Paul, they're just creating one problem trying to solve another," Kahn said.

Kahn said the glitch in the way doctors are paid for treating Medicare patients is not a health care problem, but a fiscal problem created by Congress when it devised the SGR and then refused to deal with the ongoing problem across a decade. And if Congress insists on offsetting the cost, they should do it without penalizing health care providers or Medicare patients, he said.

"It's Congress' fault, so why should providers who are trying to serve beneficiaries pay a price for it?" he asked.

Lawmakers will now have three months to figure that out — or else they'll have to pass a 16th fix for doc fees.