Accessibility links
Colorado Takes Health Plans To People Shopping For Groceries : Shots - Health News TV ads and websites are all well and good, but Colorado is finding that face-to-face help from a live person is often the best way to reach the uninsured and sign them up for a health plan. Still, it isn't easy, and takes time and money.

Despite White House and state efforts to promote the Affordable Care Act, some people still don't have health insurance, or any idea how to sign up for it.

Take Corryn Young, a 32-year-old dental hygienist in Fort Collins, Colo. She knows she needs to get health insurance but is a little vague on the details. 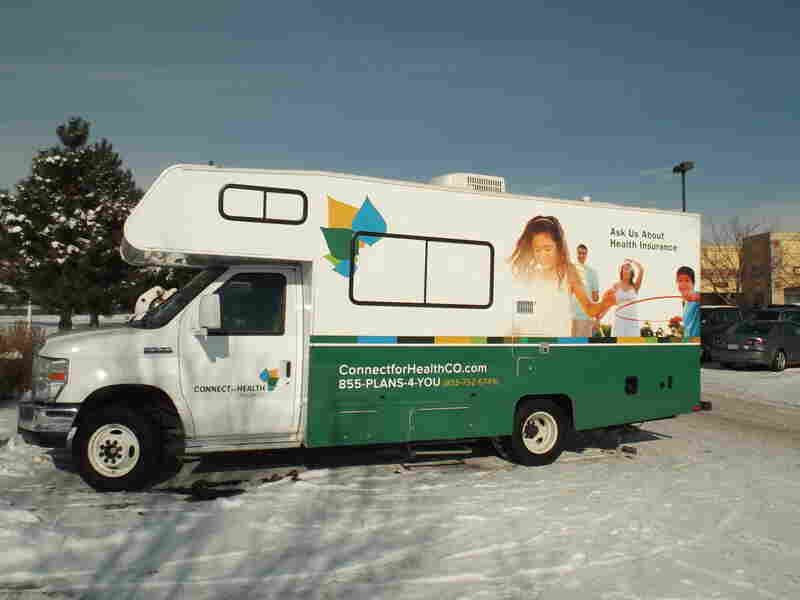 "What my income would qualify me for, when I need to be signed up, what type of deductibles they have to offer — that kind of stuff overwhelms me," Young says.

There are people available to help her with all of those questions. The White House has set aside more than a quarter of a billion dollars nationally to pay navigators who can give people face-to-face help — in buying coverage and in calculating subsidies to make it more affordable.

Navigators like Barbara Sigmon will sit down with Young and go over every aspect of her application. Colorado got some of the most money per capita of any state to hire navigators. There's generally a lot more in-person help available in states that are cooperating with the health care law than in states not cooperating.

Navigators are working at 57 assistance organizations across Colorado — everyone from county health departments to local clinics to the state trucking association. Meanwhile, neighboring states Nebraska and Arizona aren't embracing the health care law like Colorado is. They have just two navigator organizations each, and about $2 per uninsured person to spend on assisters. Colorado has almost $24 per person.

There are dozens of people like Sigmon across Colorado, just waiting for people to ask for help.

Business is sort of hit and miss, she says. "It's either busy or it's pretty slow. But it's starting to pick up and gain momentum as we do more of these outreach programs so that people know we're here."

Sigmon is at a table near the exit of a local supermarket in Colorado Springs. It was set up by Connect for Health, Colorado's new health insurance marketplace, and is stocked with brochures and little give-away notebooks, lip balm and stocking caps with Connect for Health's logo.

Sigmon says lots of people have heard of the marketplace but don't know about navigators.

"It's because all the advertising that's going on on TV is advertising for [the] Connect for Health website," she says. "It's not advertising for us. Every person that I've had come in is saying, 'I heard about it from my mother, my brother, my friend.' "

Connect for Health is starting to bring navigators out of their offices as part of a year-end marketing tour that's setting up tables at 20 different supermarkets and pharmacies across the state.

Corryn Young was on a break from work at the supermarket — and made exactly the kind of connection that the government and insurers hope for. She spotted the Connect for Health table with just what she needed.

"I was just getting Starbucks," she says, when she noticed the information table with a crowd of interested people around it.

"It was a perfect place to get my questions answered," Young says. "If I wanted to get signed up today, they would have walked me through it and got me signed up. I just have to go back to work."

Young made an appointment to follow up with a navigator. And Barbara Sigmon booked several appointments for people who were glad to learn she's there.

"They are very confused by the Affordable Care Act," Sigmon says. "There are so many myths out there. And especially Obamacare — they seem to think they're being persecuted ... so there's a lot of confusion."

Whether or not states are taking the federal money, private groups are investing in outreach and enrollment, too. For example, the Colorado Progressive Coalition is sending volunteers to Denver neighborhoods, knocking on every door and offering people help signing up for coverage.

But all of the effort has netted about 23,000 customers for private insurance in the state's marketplace as of Dec.14. That's only about one-fifth of the way to the state's goal of enrolling 136,000 people by the end of March.

This story is part of a partnership that includes NPR and Kaiser Health News, with support from the Dennis A. Hunt Fund for Health Journalism, a program of the USC Annenberg School of Journalism's California Endowment Health Journalism Fellowships.

For more answers to your questions, check the NPR Affordable Care App here.