Accessibility links
Diabetes Gene Common In Latinos Has Ancient Roots : Shots - Health News Scientists have found a gene that helps to explain why Mexicans are prone to Type 2 diabetes. The disease gene, like many others we humans carry, dates back to the time when humans and Neanderthals had sex thousands of years ago. 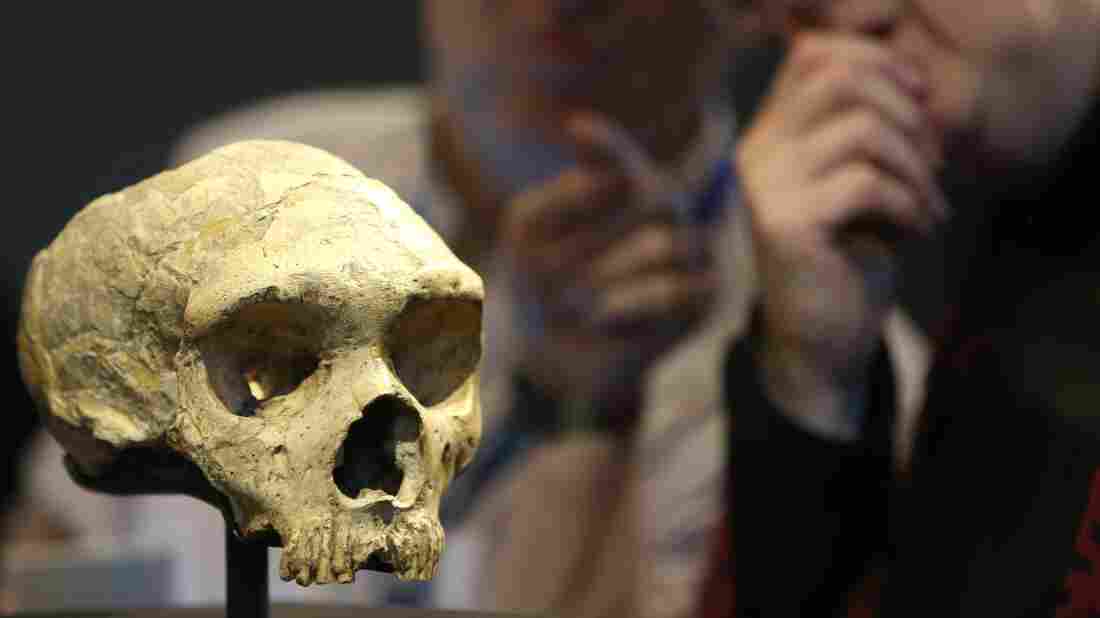 The skull of a female Neanderthal, who lived about 50,000 years ago, is displayed at the Natural History Museum in London. Rick Findler/Barcroft Media/Landov hide caption 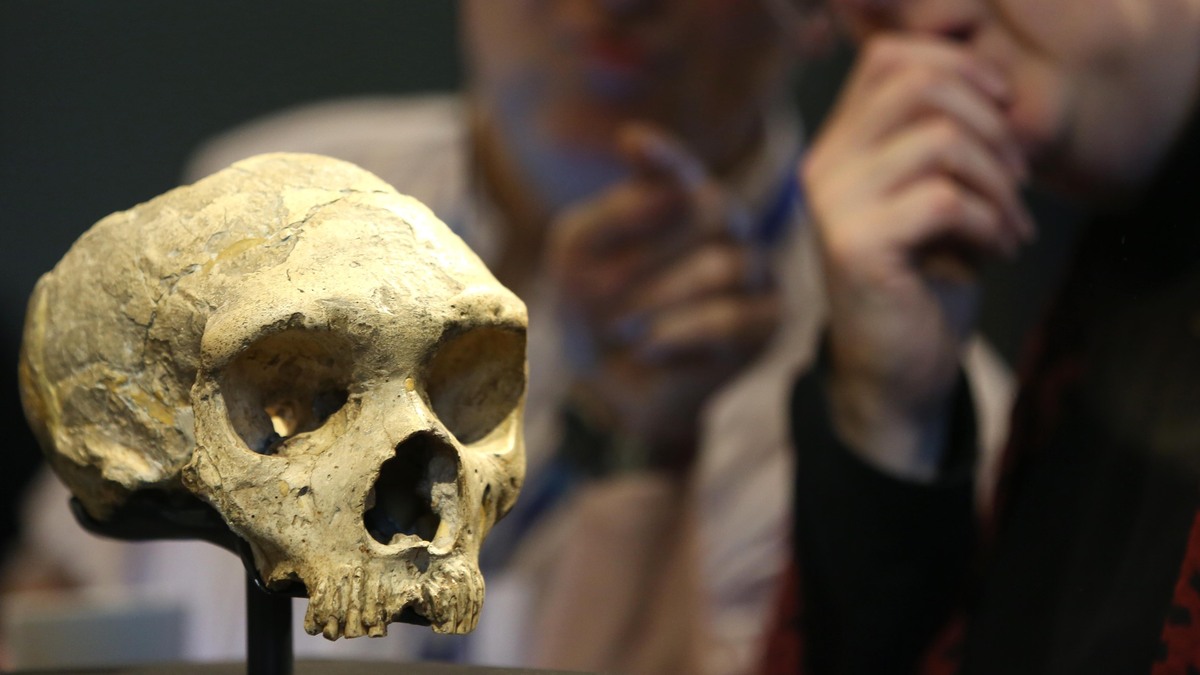 The skull of a female Neanderthal, who lived about 50,000 years ago, is displayed at the Natural History Museum in London.

When it comes to the rising prevalence of Type 2 diabetes, there are many factors to blame.

Diet and exercise sit somewhere at the top of the list. But the genes that some of us inherit from Mom and Dad also help determine whether we develop the disease, and how early it crops up.

Now an international team of scientists have identified mutations in a gene that suggests an explanation for why Latinos are almost twice as likely to develop Type 2 diabetes as Caucasians and African-Americans. 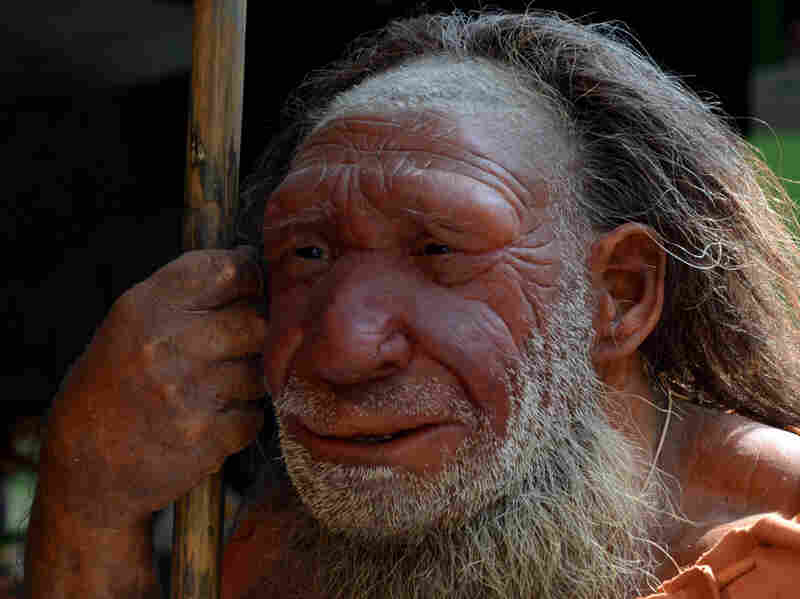 A reconstruction of a Neanderthal man stands at the Neanderthal Museum in Mettmann, Germany. Horst Ossinger/DPA/LANDOV hide caption 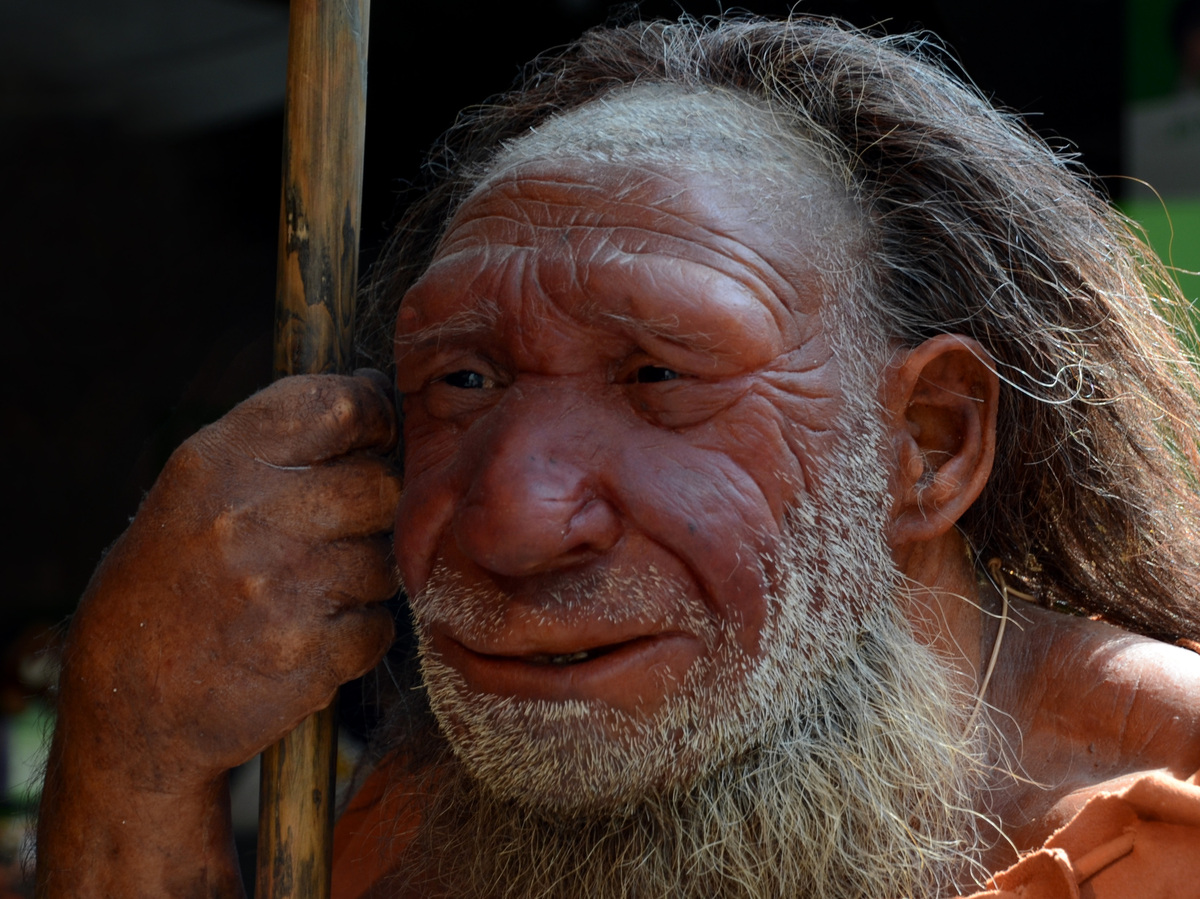 A reconstruction of a Neanderthal man stands at the Neanderthal Museum in Mettmann, Germany.

But here's the kicker: You have to go further back on the family tree than your parents to find who's to blame for this genetic link to diabetes. Think thousands of generations ago.

Harvard geneticist David Altshuler and his colleagues uncovered hints that humans picked up the diabetes mutations from Neanderthals, our ancient cousins who went extinct about 30,000 years ago.

"As far as I know, this is the first time a version of a gene from Neanderthal has been connected to a modern-day disease," Altshuler tells Shots. He and his colleagues report the findings Wednesday in the journal Nature.

A few years ago, geneticists at the Max Planck Institute for Evolutionary Anthropology in Germany sent shock waves through the scientific community when they sequenced the genome of a Neanderthal from a fossil. Hidden in the genetic code were patterns that matched those in human DNA. And the data strongly suggested that humans were more than just friendly neighbors with Neanderthal.

"Now it's well accepted that humans interbred with Neanderthals," Altshuler says. On average most of us carry about 2 percent of Neanderthal DNA in our genome. So it's not surprising, he says, that 2 percent of our traits would be inherited from the ancient primates.

The new data don't mean that Neanderthals had diabetes, Altshuler is quick to point out. "It just happens that this disease sequence came from them," he says.

To identify genes that contribute to Latinos' high rate of Type 2 diabetes, Altshuler and his team analyzed DNA from over 8,000 residents of Mexico and people who lived in Latin America. These people had a mix of European and Native American ancestry.

The team found many genes already known to be involved with diabetes, such as one related to insulin production. But a new one also popped up in the analysis: a gene that's likely involved in fat metabolism.

Mutations in this gene increase a person's risk of getting Type 2 diabetes by about a 20 percent, Altshuler and the team found. If the person has two copies of the mutations, one from each parent, the risk rises by about 40 percent.

So for Mexican Americans, their risk for Type 2 diabetes goes from about 13 percent to 19 percent if they inherit two copies of the mutations. For other Americans, the risk gets boosted to about 11 percent from 8 percent.

"This is a genetic factor that has a modest affect on the risk of getting the disease. Not everybody that has it will have the disease," Altshuler says. "But the genes are very common in Latinos and Asians."

So the new genetic data help to explain a big chunk — perhaps almost a quarter — of the difference in Type 2 diabetes prevalence in Latinos versus European Americans.

"The findings are important because they give us a new biological clue about a gene involved in diabetes, which could lead to more treatments," Altshuler says. "The Neanderthal connection is interesting, but it's not the essence of the work."