Accessibility links
$1,000 Pill For Hepatitis C Spurs Debate Over Drug Prices : Shots - Health News Earlier this month, the Food and Drug Administration approved a class of drugs that can cure most hepatitis C infections. That's great news for the more than 3 million Americans infected. But the high cost — $84,000 per course of treatment — means some patients could miss out. 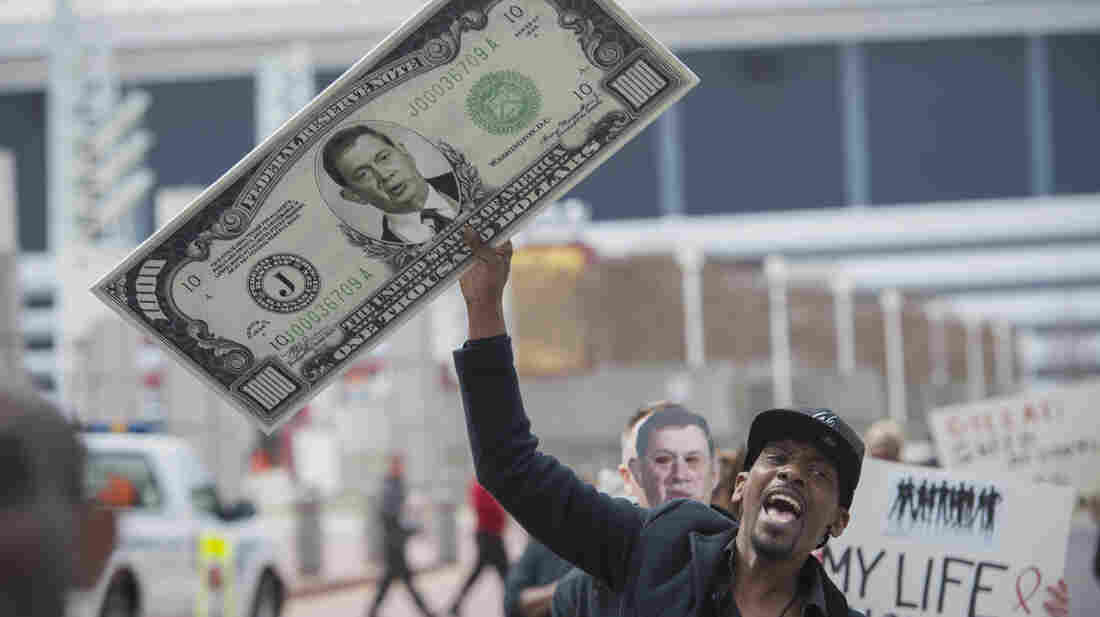 Timothy Webb and other advocates protest the cost of HIV drugs manufactured by the pharmaceutical company Gilead outside an AIDS conference in Atlanta in March. Gilead is making a new hepatitis C drug, Sovaldi. John Amis/AP Images for AIDS Healthcare Foundation hide caption 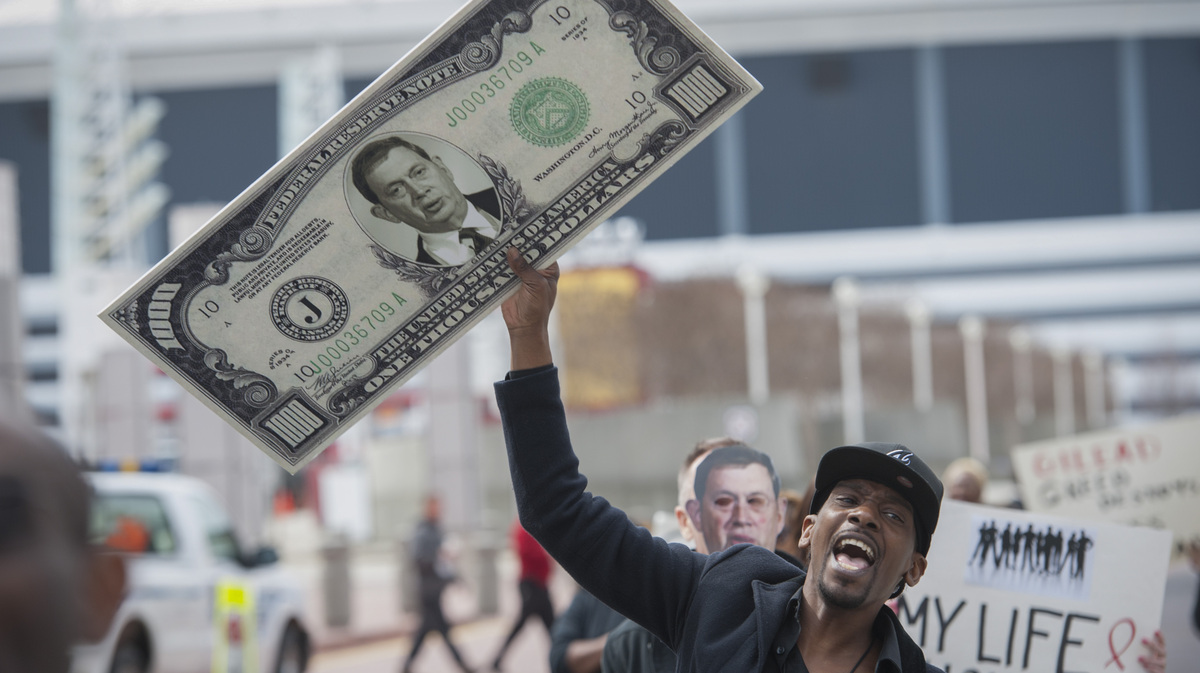 Timothy Webb and other advocates protest the cost of HIV drugs manufactured by the pharmaceutical company Gilead outside an AIDS conference in Atlanta in March. Gilead is making a new hepatitis C drug, Sovaldi.

Federal regulators this month opened a new era in the treatment of a deadly liver virus that infects three to five times more people than HIV. Now the question is: Who will get access to the new drug for hepatitis C, and when?

The drug Sovaldi will cost $1,000 per pill. A typical course of treatment will last 12 weeks and run $84,000, plus the cost of necessary companion drugs. Some patients may need treatment for twice as long.

Hepatitis researchers call the drug a landmark in the treatment of this deadly infection. More than 90 percent of patients who get the new drug can expect to be cured of their hepatitis C infection, with few side effects.

Curing hepatitis C has been difficult, involving regimens that don't work as well as the new option and bring harsh side effects.

What Will It Cost?

The drug company Gilead Sciences Inc. of Foster City, Calif., manufactures Sovaldi. And some activists are beginning to complain about the company's decision to charge so much for the drug. "For Gilead, we have outrage, pure and simple," Michael Weinstein of the AIDS Healthcare Foundation told Business Wire.

But Gregg Alton, a vice president at Gilead, says the high price is fully justified. "We didn't really say, 'We want to charge $1,000 a pill,' " Alton says. "We're just looking at what we think was a fair price for the value that we're bringing into the health care system and to the patients."

But Andrew Hill, a researcher in the Department of Pharmacology and Therapeutics at the University of Liverpool, says $84,000 per cure is too much, based on his estimate of Gilead's cost to produce the drug.

"Even when we were very conservative [with our estimate], the cost of a course of these treatments would be on the order of $150 to $250 per person," Hill says. He questions whether the $84,000 price tag represents "a fair profit."

Hill estimated the cost of producing Sovaldi by comparing it to similar antiviral drugs used to treat HIV, which cost about a $1 per gram to make.

"The amazing thing with hep C is you only need a few grams of these drugs to cure the infection," Hill says. "You need 10 grams or 30 grams of drugs."

There are some interesting parallels between the new hepatitis C drugs (Sovaldi and others in the pipeline) and the antiviral drugs that came out 20 years ago to treat HIV. Both classes of drugs were initially very pricey. Both revolutionized the treatment of chronic, lethal infections that are major global health problems.

But there are big differences. First, hepatitis C is actually a much bigger public health threat than HIV — a fact that has received little attention. Secondly, the new hepatitis C drugs can eliminate the virus completely — once it's gone, people are cured. Drugs against HIV just suppress the virus, so must be taken for a lifetime.

Given that latter point, Dr. Camilla Graham of Beth Israel Deaconess Medical Center in Boston thinks that the high cost of the new hepatitis C treatments might be justified.

"Maybe we decide that $100,000 is a worthwhile investment to cure someone of an otherwise devastating chronic infection," Graham says. After all, it can now cost up to $300,000 to treat patients with advanced hepatitis C, using less effective and more harrowing regimens.

Graham is a hep-C specialist. So she knows firsthand how the slow-moving virus kills patients by destroying their livers and causing liver cancer. The virus is the main reason that nearly 17,000 Americans are waiting for a liver transplant.

Another factor to consider, Graham says, is that the clock is ticking for people infected with hepatitis C, most of whom don't know it.

"We have a very narrow window of time to find as many people as possible and to cure them as quickly as possible, if we want to make a substantial impact on their disease progression, as well as on those very expensive complications in the future," Graham says. "You have to treat them now."

The urgency is greater for people who are infected with both HIV and hepatitis C because having both diseases accelerates the liver damage from hepatitis.

Older hepatitis C regimens carry many side effects, such as fatigue, muscle aches, fever, skin rashes, anemia, depression, nausea and loss of appetite. These side effects have been deterrents to treating people before they developed clear signs of liver damage.

But the availability of gentler therapies is an incentive to beginning treatment earlier, before people develop signs and symptoms of liver scarring. That approach greatly expands the number of people eligible for treatment — and the potential market for Sovaldi and upcoming drugs.

Graham thinks Gilead should factor the larger market size into the drugs' price.

She notes that Gilead paid more than $11 billion to acquire a smaller company that developed Sovaldi. She acknowledges that Gilead should be allowed to recoup that investment.

On the other hand, "you only need about 150,000 people to recover that cost," Graham says. "And so, if you're treating 2 million people, once you have recovered your cost, then I think it's ... I don't want to say it's unfair, but it does start feeling more exploitative."

Graham says she thinks once Gilead has recovered its investment cost, it ought to cut the price of Sovaldi.

"That's very unlikely that we would do that," responds Alton, Gilead vice president. "I appreciate the thought."

Alton says critics should "look at the big picture."

"Those who are bold and go out and innovate like this and take the risk — there needs to be more of a reward on that," he says. "Otherwise, it would be very difficult for people to make that investment."

Gilead will help U.S. patients pay for Sovaldi if they can't afford it, Alton says, or the company will help them look for drug coverage. And Gilead will charge far less for a course of the drug in places such as India, Pakistan, Egypt and China, where most people with hepatitis C live.

Pressed on how low the price of a cure will go, Alton says: "I don't think we'll be able to get it into the low hundreds. But I think we can get it into an affordable range for them. It'll be from the high hundreds to low thousands for these types of markets."

It took more than 10 years for many people in developing countries to get access to life-saving HIV drugs. Advocates hope it won't take anywhere near that long to start curing hepatitis C.