Accessibility links
Mapping Emotions On The Body: Love Makes Us Warm All Over : Shots - Health News How do you know you're in love? Angry? Or sad? Emotions start off in the brain, then ripple through the whole body. Now scientists have charted where we consciously feel specific emotions. They hope these sensation maps will one day help diagnose and treat mood disorders.

Mapping Emotions On The Body: Love Makes Us Warm All Over

Mapping Emotions On The Body: Love Makes Us Warm All Over 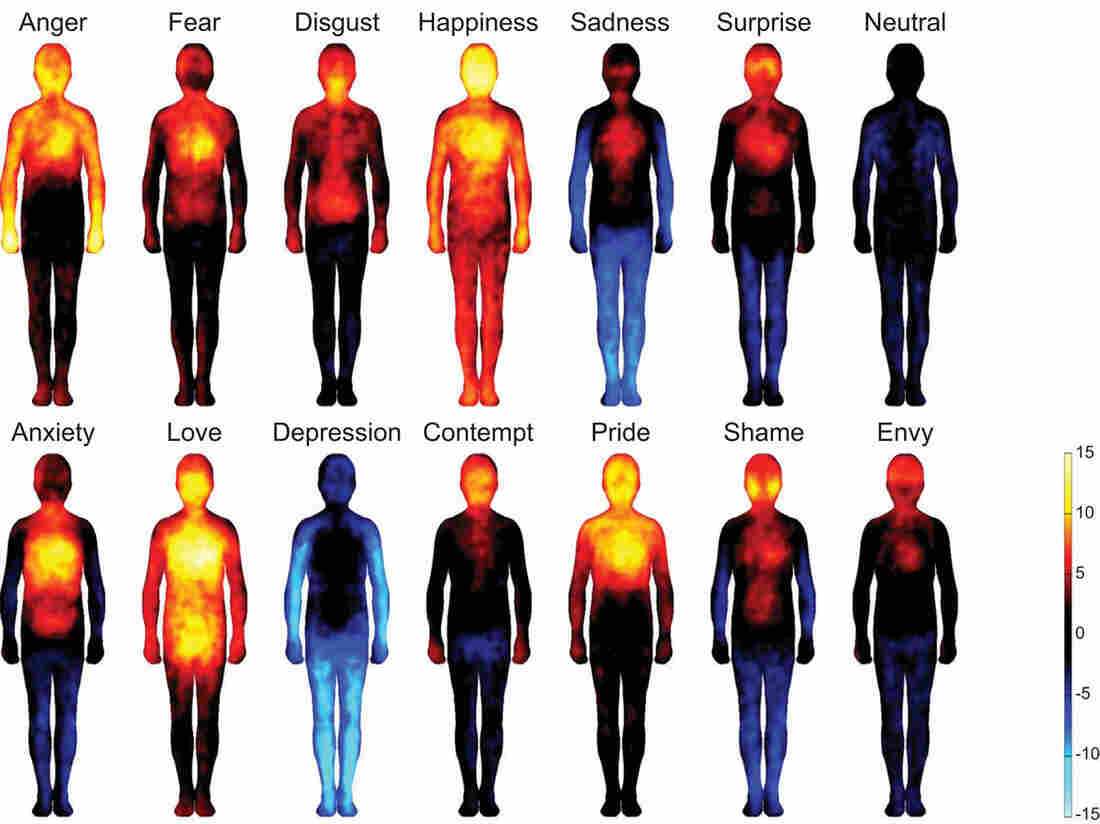 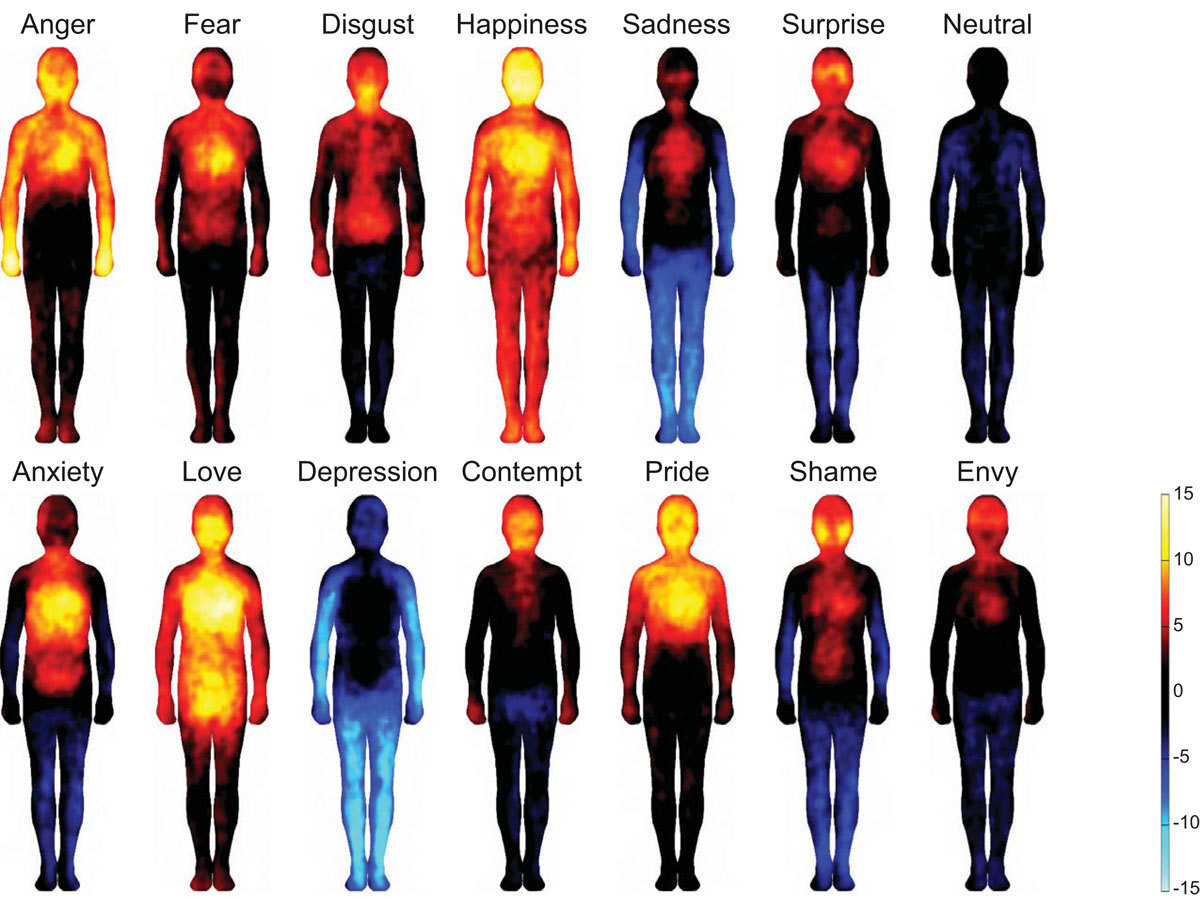 Close your eyes and imagine the last time you fell in love. Maybe you were walking next to your sweetheart in a park or staring into each other's eyes over a latte.

Where did you feel the love? Perhaps you got butterflies in your stomach or your heart raced with excitement.

When a team of scientists in Finland asked people to map out where they felt different emotions on their bodies, they found that the results were surprisingly consistent, even across cultures.

Victory Or Defeat? Emotions Aren't All In The Face

People reported that happiness and love sparked activity across nearly the entire body, while depression had the opposite effect: It dampened feelings in the arms, legs and head. Danger and fear triggered strong sensations in the chest area, the volunteers said. And anger was one of the few emotions that activated the arms.

The scientists hope these body emoticons may one day help psychologists diagnose or treat mood disorders.

"Our emotional system in the brain sends signals to the body so we can deal with our situation," says Lauri Nummenmaa, a psychologist at Aalto University who led the study.

"Say you see a snake and you feel fear," Nummenmaa says. "Your nervous system increases oxygen to your muscles and raises your heart rate so you can deal with the threat. It's an automated system. We don't have to think about it."

That idea has been known for centuries. But scientists still don't agree on whether these bodily changes are distinct for each emotion and whether this pattern serves as a way for the mind to consciously identify emotions.

Basic emotions, such as happiness, sadness and fear, form the building blocks for more complex feelings.

To try to figure that out, Nummenmaa and his team ran a simple computer experiment with about 700 volunteers from Finland, Sweden and Taiwan.

The team showed the volunteers two blank silhouettes of a person on a screen and then told the subjects to think about one of 14 emotions: love, disgust, anger, pride, etc. The volunteers then painted areas of the body that felt stimulated by that emotion. On the second silhouette, they painted areas of the body that get deactivated during that emotion.

"People find the experiment quite amusing. It's quite fun," Nummenmaa tells Shots. "We kept the questions online so you try the experiment yourself." (You can try it here.)

Not everybody painted each emotion in the same way. But when the team averaged the maps together, signature patterns emerged for each emotion. The team published these sensation maps Monday in the Proceedings of the National Academy of Sciences.

The team still doesn't know how these self-reported sensations match with the physiological responses that occur with emotion.

But previous studies have found marked changes in bodily sensations in mood disorders, Nummenmaa says. "For instance, with depression sometimes people have pain in their chest."

And there's even some evidence that when you change your own body language — like your posture or stance — you can alter your mind.

Neuroscientist Antonio Damasio, who was not involved in this study, says he's "delighted" by Nummenmaa's findings because they offer more support for what he's been suggesting for years: Each emotion activates a distinct set of body parts, he thinks, and the mind's recognition of those patterns helps us consciously identify that emotion.

"People look at emotions as something in relation to other people," Damasio, who is a professor at the University of Southern California, says. "But emotions also have to do with how we deal with the environment — threats and opportunities." For those, Damasio says, you need your body as well as your mind.