Accessibility links
Nothing Focuses The Mind Like The Ultimate Deadline: Death : Shots - Health News A Swedish inventor created a watch that counts down the seconds left in your life. He calls it "the happiness watch" because he thinks living with the reality of one's mortality can enhance our lives. 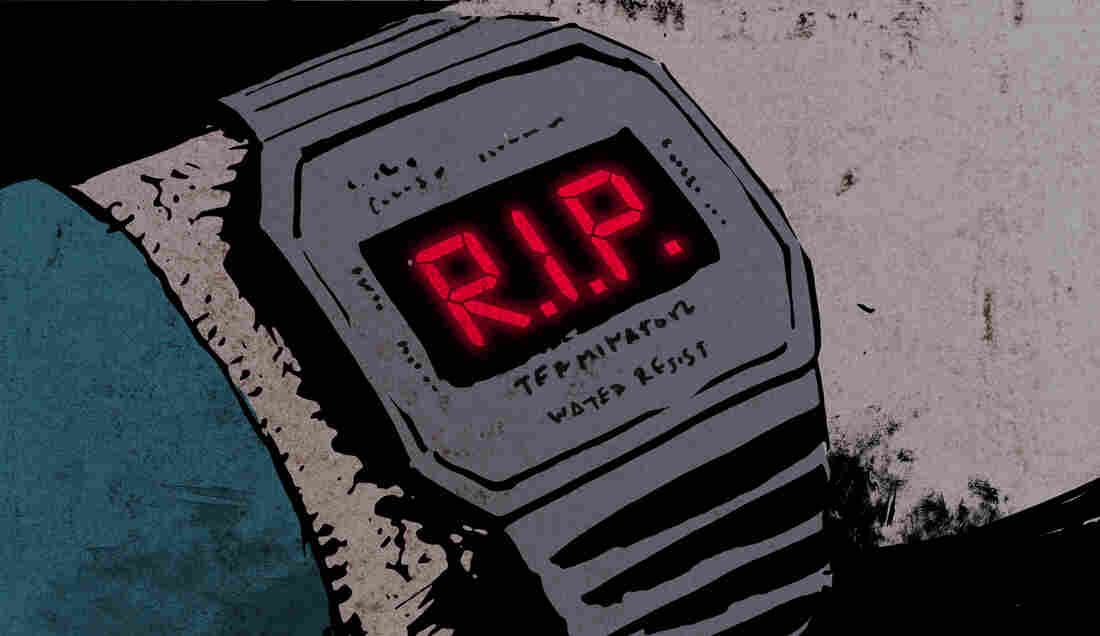 Could a countdown to death help you lead a more ecstatic life? Daniel Horowitz for NPR hide caption

Luckily for you, there's a new product called Tikker, a wristwatch that counts down your life, so you can watch on a large, dot-matrix display as the seconds you have left on Earth disappear down a black hole.

Your estimated time of death is, of course, just that — an estimate. Tikker uses an algorithm like the one used by the federal government to figure a person's life expectancy. But the effect is chilling, a sort of incessant grim reaper reminding you that time is running out.

Tikker's inventor is a 37-year-old Swede named Fredrik Colting. He says he invented the gadget not as a morbid novelty item, but in an earnest attempt to change his own thinking.

He wanted some sort of reminder to not sweat the small stuff and reach for what matters. Colting, a former gravedigger, figured imminent death was the best motivator there is. That's why he calls Tikker "the happiness watch." It's his belief that watching your life slip away will remind you to savor life while you have it.

But that's not the whole story. A whole dark underbelly of research suggests that thinking about our own mortality can bring out the worst in us. The work of Jeff Greenberg, Sheldon Solomon and Tom Pyszczynski — grandfathers of an idea in social psychology called terror management theory — has shown that thinking about death makes us, well, pretty xenophobic. When confronted with our mortality, we cling to those like us and disparage those who are different.

So whether Tikker will make you happy or, as Solomon quipped to me, "a xenophobic serial killer," is still unknown. What is known is that the watch will be available in April 2014, and thousands of preorders have already rolled in.