Accessibility links
Pain In The Back? Exercise May Help You Learn Not To Feel It : Shots - Health News There's evidence that many standard treatments for back pain — including surgery, spinal injections and painkillers — are often ineffective and can even worsen and prolong the problem. 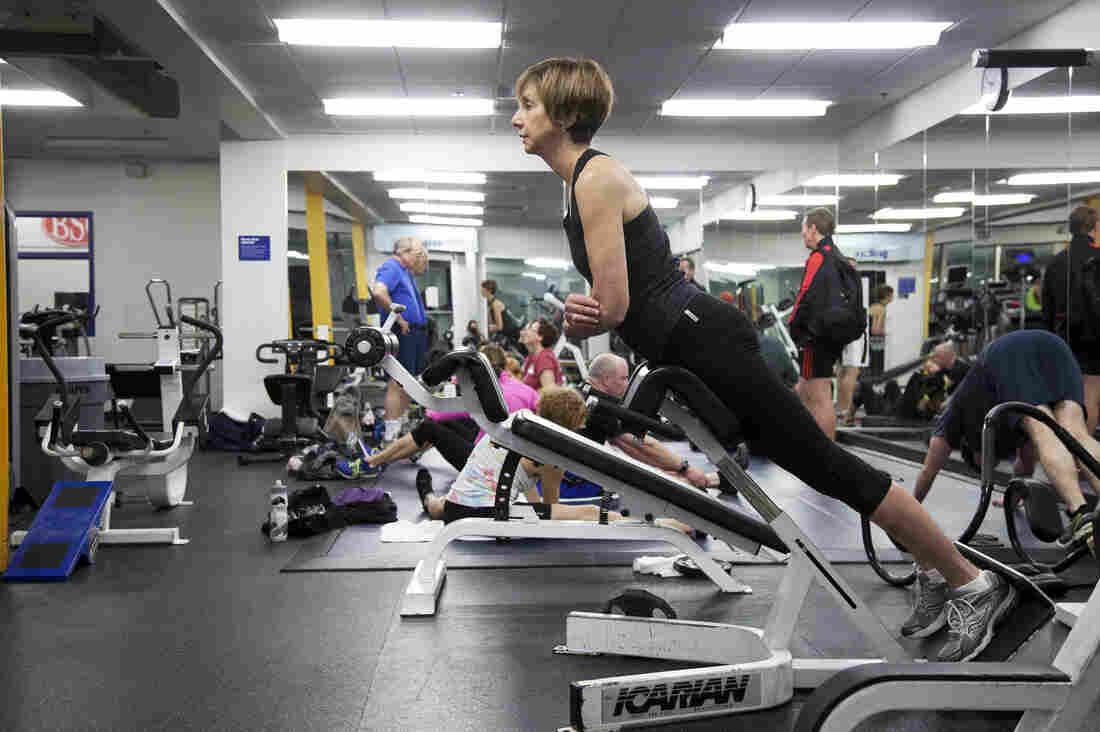 Janet Wertheimer does a back hyperextension exercise at Boston Sports Club in Wellesley, Mass. Regular exercise has helped control her chronic back pain. Ellen Webber for NPR hide caption

More than 1 in 4 adult Americans say they've recently suffered a bout of low-back pain. It's one of the most common reasons people go to the doctor. And more and more people are being treated for it.

America spends more than $80 billion a year on back pain treatments. But many specialists say less treatment is usually more effective.

In fact, there's evidence that many standard treatments for back pain — surgery, spinal injections and painkillers — are often ineffective and can even worsen and prolong the problem.

Dr. Jerome Groopman agrees with that premise. He suffered back pain for almost 20 years. He was a young marathon runner 32 years ago when back pain struck out of the blue.

"I couldn't run. It was difficult to sleep," he says. "I wasn't confined to bed, but I was hobbling around." 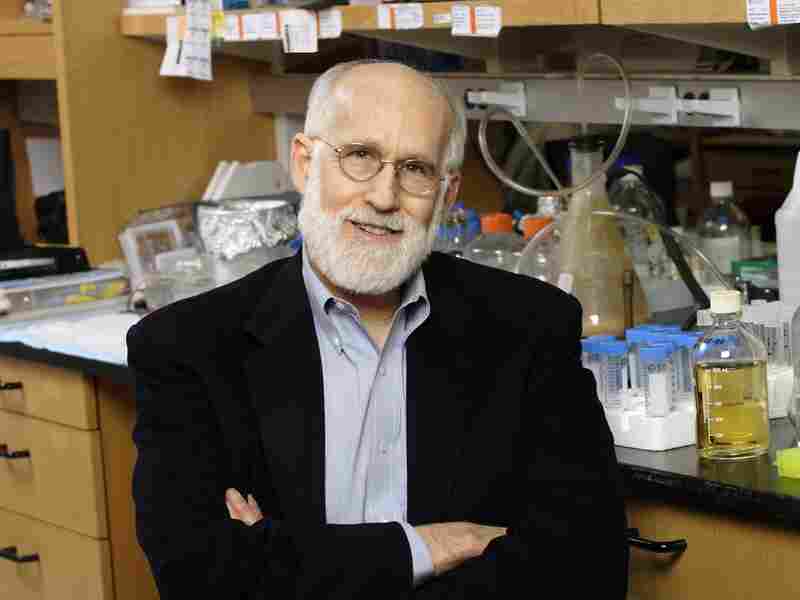 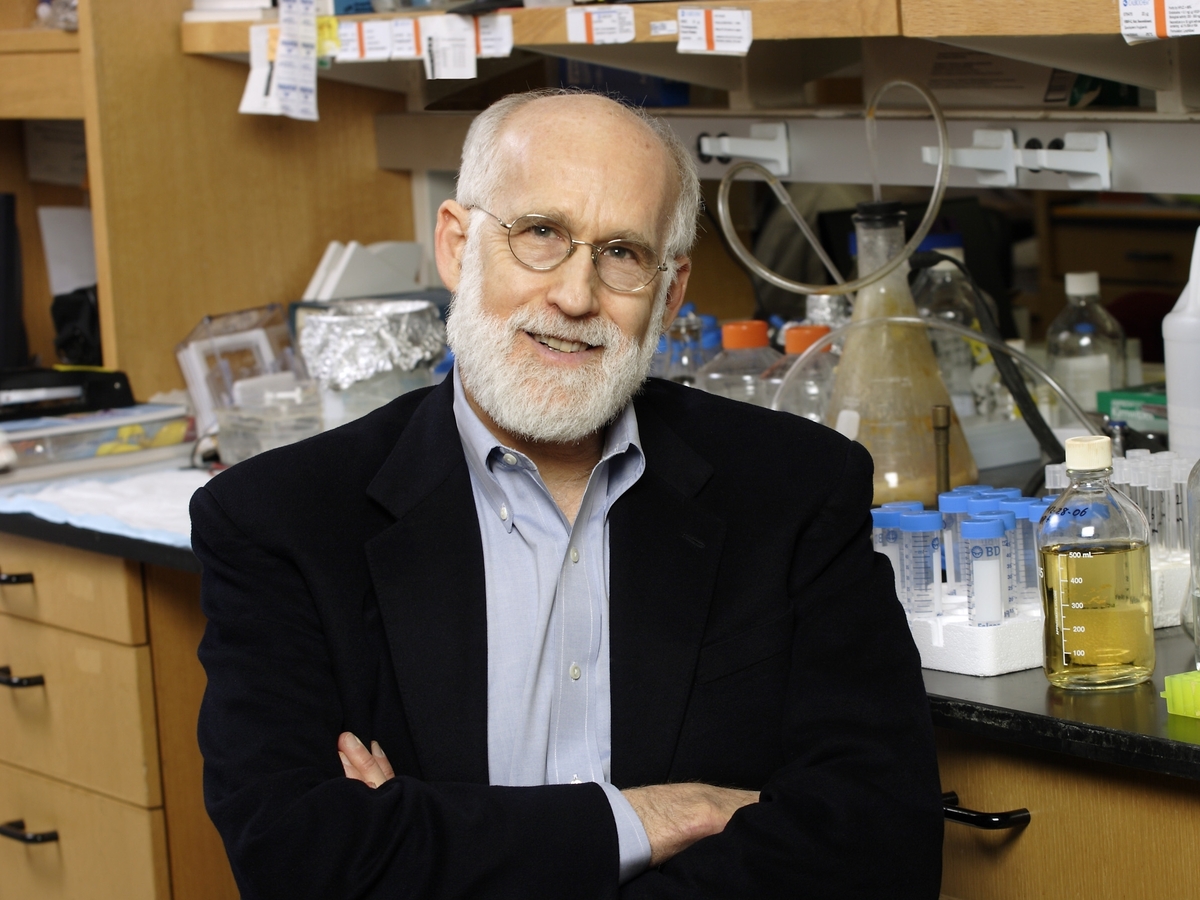 Dr. Jerome Groopman found that surgery made his back pain worse.

Groopman, a Harvard cancer specialist who writes about medicine for The New Yorker, wanted the problem fixed — right away. So he found a surgeon who removed a damaged disc, the jellylike cushioning between each vertebra.

The surgery didn't fix his pain.

Then, one day during brunch at a friend's house, something happened that altered the course of his life.

"I stood up from a chair and just had an explosive electric shock through my lower back," he remembers. "Basically, I fell to the floor and couldn't get up."

His previous pain was severe. But this was over the top. Groopman could hardly move.

"I was so desperate after almost three weeks that I found a neurosurgeon and orthopedist who said, 'You have spinal instability. We'll fuse you, and in three weeks you'll be playing football.' "

In a spinal fusion, surgeons weld together adjacent vertebrae with a bone graft. It's an increasingly common operation.

But for Groopman, more surgery made things worse.

"I woke up from the surgery in excruciating pain, and basically could hardly move my legs," he says. "And I remember the orthopedic surgeon coming by and saying, 'Well, I don't know why you're having so much trouble. ... But, you know, if it doesn't get better in a few weeks we could reoperate.' "

Some research suggests that 1 in 5 patients who have surgery for back pain end up having more surgery. For some, like Jerry Groopman, it doesn't help at all.

One reason invasive treatments for back pain have been rising in recent years, Deyo says, is the ready availability of MRI scans. These detailed, color-coded pictures that can show a cross-section of the spine are a technological tour de force. But they can be dangerously misleading. 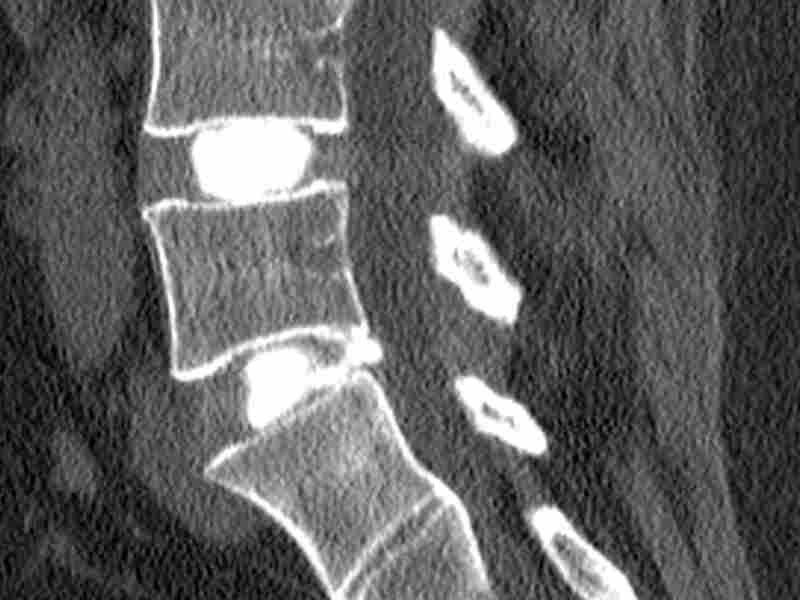 This MRI shows a mildly herniated disc. That's the sort of thing that looks abnormal on a scan but may not be causing pain and isn't helped by surgery. Science Source hide caption

"Seeing is believing," Deyo says. "And gosh! We can actually see degenerated discs, we can see bulging discs. We can see all kinds of things that are alarming."

That is, they look alarming. But they're most likely not the cause of the pain.

Lots of people who are pain-free actually have terrible-looking MRIs. And among those who have MRI abnormalities and pain, many specialists question whether the abnormality is really the cause of the pain, and whether fixing it can make the pain go away.

Surgery can help for certain conditions, such as a herniated or bulging disc with leg pain called sciatica. But most age-related back pain usually can't be fixed with surgery.

Research is showing that the pain often has nothing to do with the mechanics of the spine, but with the way the nervous system is behaving, according to Dr. James Rainville of New England Baptist Hospital in Boston.

"It's a change in the way the sensory system is processing information," says Rainville, who is a physiatrist, or specialist in rehabilitation medicine. "Normal sensations of touch, sensations produced by movements, are translated by the nervous system into a pain message. That process is what drives people completely crazy who have back pain, because so many things produce discomfort."

When Does Surgery Help?

Surgery is often indicated for conditions like severe spinal stenosis, herniated discs, tumors, trauma, scoliosis and other spinal deformities. But less than 5 percent of people with back pain are candidates for surgery, according to some research.

This is a different way of thinking about pain. Normally pain is an alarm bell that says, "Stop what you're doing right now or you may hurt yourself!" But for many people, that pain is a false signal. It's not about looming danger; it's actually caused by hypersensitive nerves.

Rainville says that about 25 percent of patients with acute back trouble get stuck in an endless loop of pain. He thinks this chronic back pain is often due to persistent hypersensitivity of the nervous system.

Genetics may help explain why back pain becomes chronic for that 25 percent. But whatever the underlying cause, Rainville and others have discovered that many of them can learn to ignore their pain.

That process requires around six weeks of regular visits to a back pain "boot camp," where specially trained therapists gradually increase the intensity of exercises designed not only to increase the strength and flexibility of the back, but also to teach patients that it's OK to move normally again.

Janet Wertheimer is a 61-year-old Massachusetts woman who recently completed Rainville's boot camp. She has had severe back pain on and off for 10 years.

One recent morning, therapist Lisa Childs put Wertheimer through her paces, starting with a rotary torso machine that required her to twist her back this way and that against the resistance of a stack of iron plates.

Next she moved to a back extension device. Wertheimer arched her back against the weight stack — by this point in her rehabilitation, 100 pounds of weight. It's something most people with chronic back pain couldn't imagine doing.

"Do you feel like you could do 5 pounds more or 10 pounds?" Childs asks.

"You can try 10 and I'll see what happens," Wertheimer says.

Wertheimer has a sudden twinge in her back. But Childs, who's trained to evaluate these things, says it's OK. Wertheimer is building strength. And along the way, she's learning not to be afraid. "It's learning not to fear the pain, learning that you can live with pain," Wertheimer says. "Understand what that pain is, but then put it aside."

Most patients in Rainville's boot camp and similar programs find that the pain eventually lessens over a few months. Sometimes it even goes away.

For years after his spinal fusion, Groopman was never without back pain. He tried a long list of things without success. Then a friend suggested that he see Rainville.

Given his long search for relief, Groopman was skeptical. But he decided to give Rainville's boot camp a try. 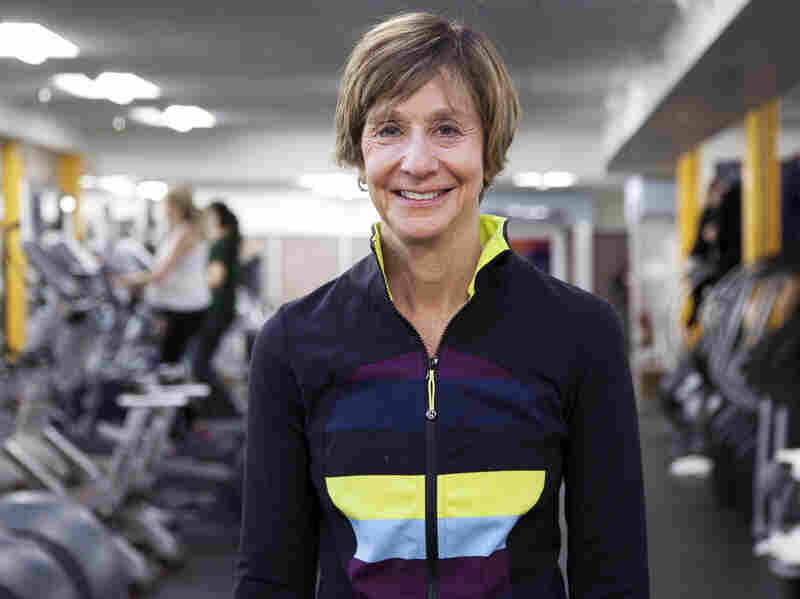 "It's learning not to fear the pain, learning that you can live with pain," Janet Wertheimer says. "Understand what that pain is, but then put it aside." Ellen Webber for NPR hide caption 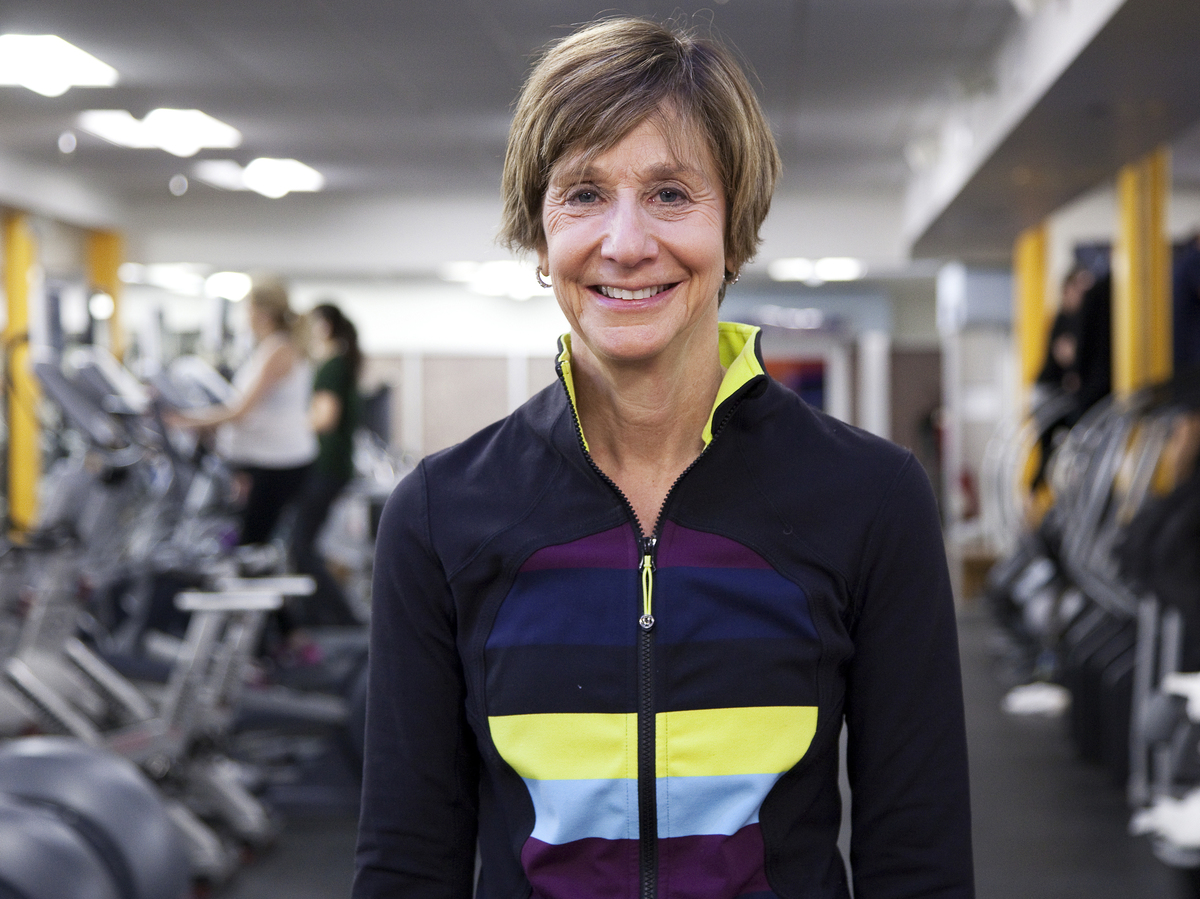 "It's learning not to fear the pain, learning that you can live with pain," Janet Wertheimer says. "Understand what that pain is, but then put it aside."

"He was really tough," Groopman recalls. "He said to me, 'You are worshiping the volcano god of pain!' And I thought: 'What is this about?' "

Rainville explains: "In primitive cultures, if you lived near a volcano and the volcano started smoking and looking like something was going to happen, well, it was obvious[ly] because gods were mad at you. And you'd start doing silly things — sacrificing chickens or goats or whatever, thinking that that would appease the gods."

In a strange way, Rainville says, people with chronic back pain do something very similar. They sacrifice parts of their life — playing golf or softball, running, picking up bags of groceries or grandchildren. Patients get so afraid of pain, they do anything to avoid it.

"They keep putting things onto this altar, thinking that's going to change the situation," Rainville says.

But it usually doesn't work. Instead, they get more paranoid about any twinge of pain, and all the while they lose strength and flexibility.

Eventually that message sank in with the skeptical Dr. Groopman. "It took about two months for me to really buy in that this was the way to go," he says. "Just let it go. Don't pay attention to it. ... And after about nine months, I was basically without any back pain."

It doesn't work that well for everyone. Janet Wertheimer still has some back pain. But she says after graduating from boot camp she can pretty much do anything she wants to — ski, go on mountain hikes, walk her dogs.

And the pain? Most of the time, she says, she blocks it out and moves on.