Accessibility links
Older Folks Get Modest Memory Boost From Brain Boot Camp : Shots - Health News Older people who took a few weeks of classes to train their brains reported doing slightly better at activities of daily living a decade later compared with people who hadn't been trained. But the perceived difference might be explained by the expectation that training would help. 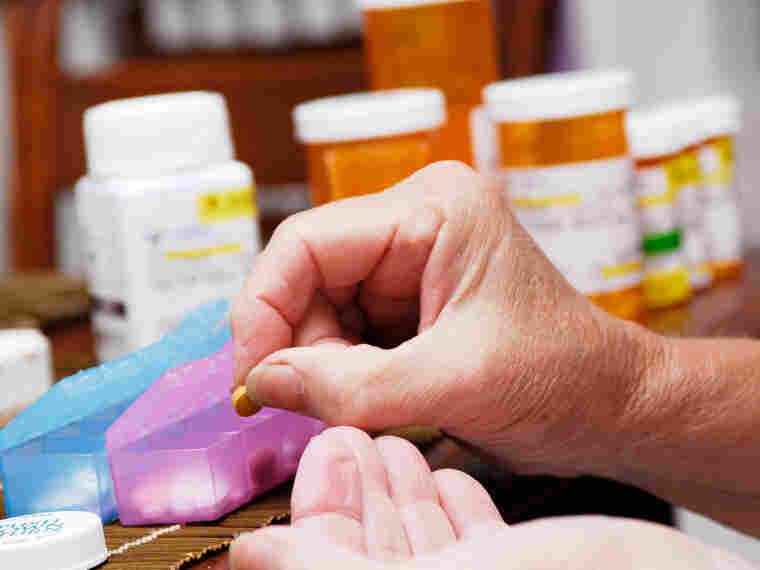 Older people who took a few weeks of classes to train their brains say their ability to perform everyday tasks declined less than people who hadn't had the training, even years later.

But the difference between them was modest at best, and wasn't independently verified. So it's impossible to know if the people were really doing better at tasks like reading bus schedules or completing order forms, or if they just thought they should be.

"During the training we emphasized how valuable the training was and how relevant it was to people's everyday lives," says George Rebok, a psychologist at Johns Hopkins Bloomberg School of Public Health and lead author of the study. The research was designed to find out if cognitive training could help slow declines in daily functioning that are common as people age. "We think people took something from the training to use in their everyday life," he says.

That practical focus made this program different than many commercially available brain-training programs, Rebok tells Shots. "We actually had practice where people had to set up different medication schedules," he says.

The study followed 2,832 people, who were 74 years old on average when the study began. They were divided into three groups that took 10 classes over five to six weeks, in either memory, reasoning or processing speed. A fourth group of people didn't take any classes.

All four groups did better on tests of memory, reasoning and speed a year later. That improvement was predictable since the volunteers in the study had taken the tests before. Those gains started waning after three years.

"These are modest effects," Rebok agrees. "But even small effects can have major public health consequences."

The results were published Monday in the Journal of the American Geriatrics Society.

In recent years commercial brain-training programs have proliferated, promising to improve performance or IQ. Proponents of the approach say they have scientific proof on their side. But the studies tend to be small and statistically flawed. The benefits tend to be narrow and fleeting.

A 2013 meta-analysis of 23 studies of memory-training programs found that they did improve memory over the short term, but didn't help with math, reasoning or any other forms of thinking. And several studies have shown that training to enhance working memory doesn't improve intelligence. In 2012, researchers at Case Western Reserve University were unable to replicate a study by other researchers that found that brain training boosts IQ.

One problem with the latest study, called ACTIVE for short, is that it doesn't have a true control group. The people in the control group were a "no-contact" control, meaning they never had training of any sort. That means they knew they couldn't be getting any potential benefits. That can bias study participants' perceptions, which is why pharmaceutical trials give control group participants a placebo pill.

And there was no independent verification of the state of people's independent living skills, so it could be that the people who did have training just expected that they should be doing better.

People should approach brain-training studies with caution, says Michael Dougherty, professor of psychology at the University of Maryland. He has analyzed previous brain-training studies and found that their claims of broader effects were illusory. "These are very hard studies to carry out," he tells Shots. And the findings are rarely clear cut.

"Who knows, there could be something to it," Dougherty says of this most recent study. But just as he can't rule out benefits, he adds, he "can't really establish that they're there in the first place."

Still, he says, "even if this is a placebo effect, in an elderly population there may be some use to improving people's self-esteem."