Accessibility links
In Michigan, Businessmen And Politicians Agree On Medicaid : Shots - Health News Michigan is one of only a handful of Republican-led states that is expanding Medicaid under the Affordable Care Act. It did it by forging a plan that worked for Republicans, Democrats and business interests, as well as doctors and hospitals. 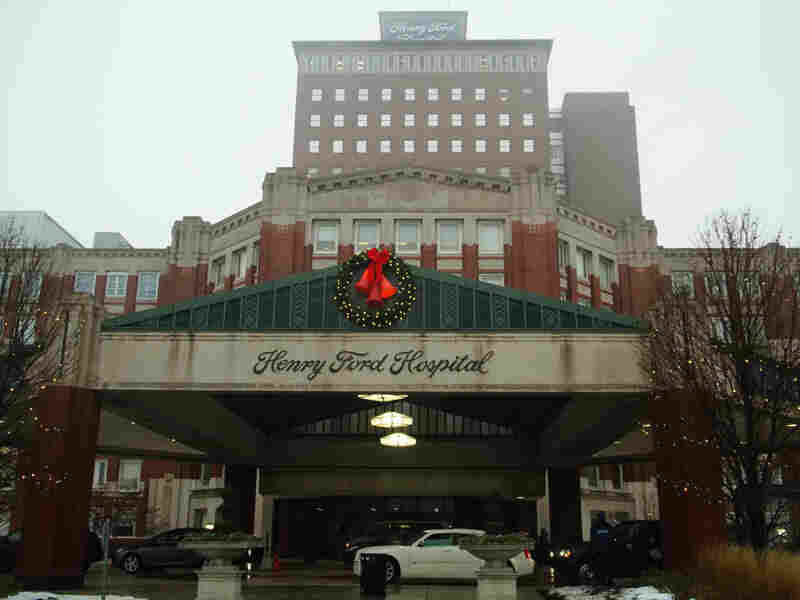 Henry Ford Hospital treats Detroit residents. About 1 in 3 residents of that city is uninsured, and the hospital CEO hopes Medicaid expansion will increase the number of people with health insurance. Eric Whitney hide caption 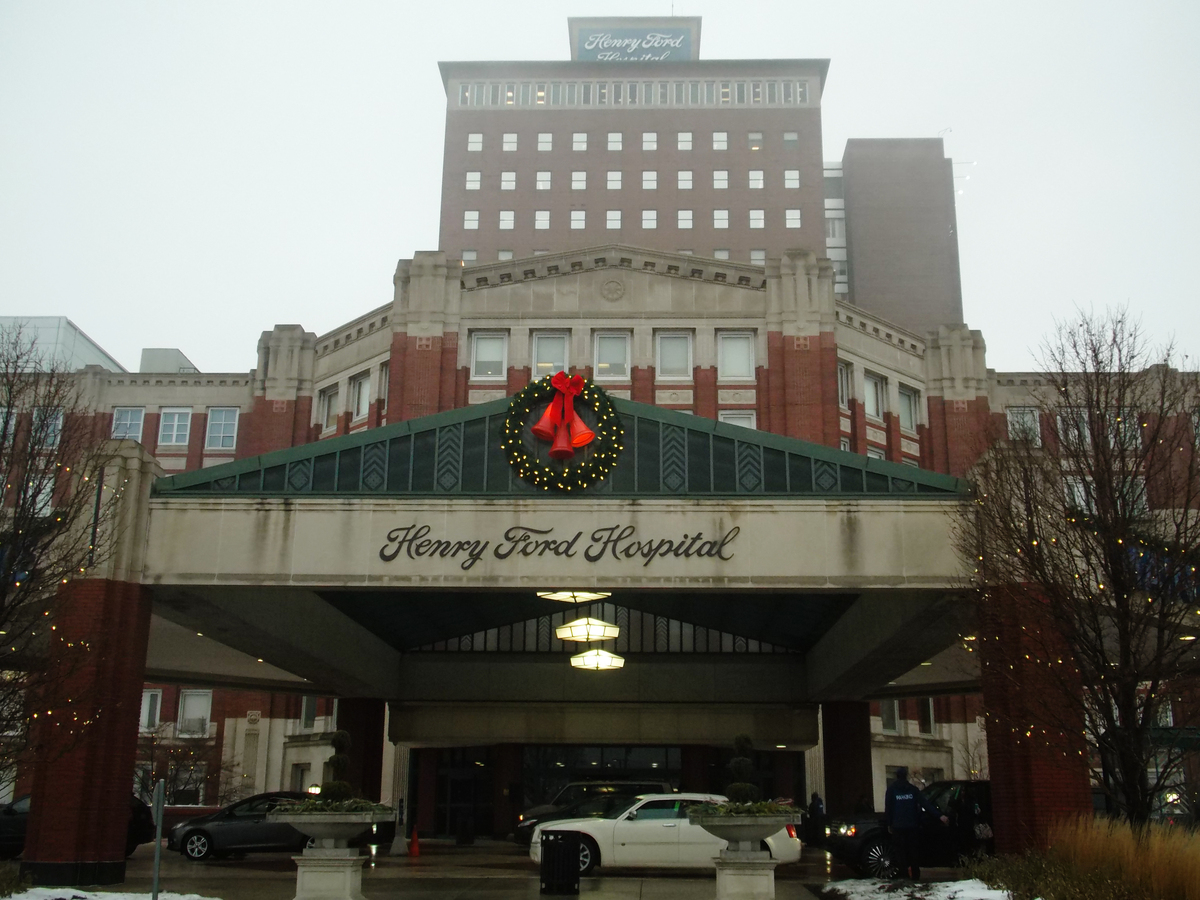 Henry Ford Hospital treats Detroit residents. About 1 in 3 residents of that city is uninsured, and the hospital CEO hopes Medicaid expansion will increase the number of people with health insurance.

Republican Party leaders say opposition to the Affordable Care Act is their No. 1 campaign issue for the midterm election.

Yet at the same time, a growing number of Republican states are now embracing a major provision of the law — expanding Medicaid, government-funded health benefits for the poor. The Supreme Court made doing that optional for states in 2012 and most Republican-led states said no. But now, some states like Pennsylvania, Iowa and Michigan are trying to forge compromises with the White House to accept the large amount of federal money that comes with Medicaid expansion, since the federal government covers nearly all of the costs.

To understand why this happened in Michigan, drop in on the cavernous, busy emergency room at Henry Ford Hospital in the heart of Detroit. About 1 in 3 patients you'll see being treated by the swarm of doctors, nurses and techs is uninsured. It's a higher rate than many other parts of Michigan or the rest of the country. That means hospitals like this one end up providing a lot of health care for free.

Henry Ford Hospital CEO Nancy Schlichting says even as Detroit has lost nearly a quarter of its population in the last decade, the amount of care the hospital provides for free has increased.

So when the Affordable Care Act offered Michigan the chance to give Medicaid benefits to some 400,000 more residents, Schlichting lobbied hard for the state to say yes.

"We were very active in advocacy," she says. "We got all of our employees engaged. We had over 5,000 emails that went to state legislators, as they were debating the Medicaid expansion for the state of Michigan. So, you know, we almost shamed people into it, you know, 'How can you turn your back on the people of this state, who have lost jobs?' "

But Republicans initially saw themselves as turning their backs on Obamacare, not the people of Michigan. State Rep. Al Pscholka was one of them.

Pscholka's district is on the southeast shore of Lake Michigan. He says it's a solidly Republican area and Obamacare doesn't have a lot of fans here.

"When people say Medicaid expansion, I think to a lot of us that meant bigger government, and it meant expanding a program that doesn't work very well," he says.

Pscholka is a Republican Party leader in the Michigan House. He was asked to look at ways to reform Medicaid. But then Republican Gov. Rick Snyder came out in favor of Medicaid expansion last year. Snyder argued that if the state didn't expand, the millions of dollars in Affordable Care Act taxes and fees Michigan would be paying would just go to other states, and not come back home as new payments to hospitals and doctors.

Plus, when Pscholka says he took a hard look at Medicaid, he didn't find the broken, bloated government program he was expecting.

"When I understood how it worked, and what we had done in Michigan in the late '90s, that was actually pretty smart. We really wanted to have a private sector system here. So we've privatized a lot of that already, which I think a lot of folks didn't understand," says Pscholka.

Medicaid is a government-funded program, but Michigan has long contracted with private sector HMOs to administer it. The idea was to use private market incentives to increase efficiency. Pscholka says that makes it easier for conservatives to stomach, and he helped draft legislation to accept federal Medicaid expansion dollars — with some conditions.

The bill passed by one vote in the state Senate.

"This is not an easy thing to explain." Pscholka says. "It's not an easy thing to get up at a my county GOP meeting, and look at friends of mine, who've been friends of mine for 20 years, who are now shooting darts at me with their eyes, and can't believe that I was even involved in this. Not only that I voted for it, but that I was somehow involved in crafting this legislation."

Pscholka's change of heart on Medicaid earned him a primary challenge from a Tea Party candidate. But she's a longshot to beat him, and those favoring expansion have some strong allies beyond Michigan's popular governor. Hospitals, doctors and the state's small business association all rallied behind the idea.

Cynthia Kay owns a video production company with eight employees in Grand Rapids. She hopes putting more people on Medicaid will help keep the price of her company's health insurance plan down in the future.

"If you think about it, we're paying for the cost of health care anyway," Kay says. "Uncompensated cost of care is driving my premiums up every single year. So, whether I think I'm paying for it or not, I'm paying for all the people who are using the emergency room as their primary care physician."

Advocates for the poor are thrilled so many uninsured Michigan residents will now be able to get Medicaid, but worry about some significant details that have yet to be finalized.

Jan Hudson is with the Michigan League for Public Policy, which advocates for low income people. Among the compromises the White House made to win Republican support in Michigan are requirements for some Medicaid recipients to pay for at least part of their care, like co-pays for doctors' office visits and procedures.

"Cost sharing is always a concern for low income people. The research says that that can be a barrier to people receiving the care that they need," Hudson says.

Still, the White House is approving cost sharing in other states like Arkansas and Iowa. Iowa recipients will pay extra if they overuse emergency rooms, and Michigan will charge them more if they don't stick with wellness plans designed to keep them healthy.

Groups that favor Medicaid expansion nationwide point to those kinds of tweaks as evidence that the White House is willing to compromise, and hope that will entice the 23 states that are still resisting expansion to take another look, and work out special arrangements of their own.

This story is part of a partnership between NPR and Kaiser Health News, with support from the Dennis A. Hunt Fund for Health Journalism, a program of the USC Annenberg School of Journalism's California Endowment Health Journalism Fellowships.