Accessibility links
Can Probiotics Help Soothe Colicky Babies? : Shots - Health News As many as 15 percent of babies have colic, which can cause bouts of inconsolable crying. Researchers are testing probiotics to see if these good bacteria can help. But they don't know how the supplements work, or how they may affect children's health long term. 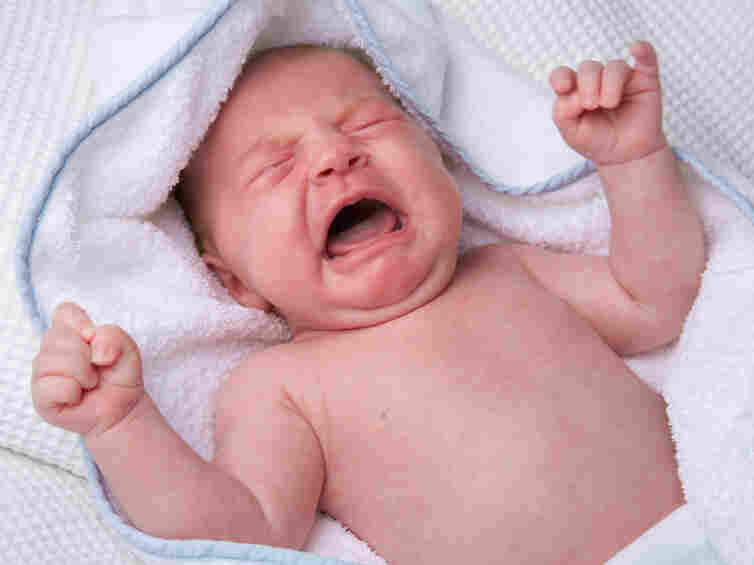 When Melissa Shenewa and her husband imagined their first weeks with their new baby, they pictured hours of cuddling. Instead, they're enduring hours of inconsolable crying.

Their 6-week-old son, Aladdin, is a colicky baby. He cries for hours, usually in the middle of the night. They've tried everything they could think of. Nothing helps.

"Being a parent when your child is screaming in pain for hours on end and there's nothing you can do, you feel helpless," says Shenewa, 24, who lives in Houston. "You feel like you're not a good parent."

The Shenewas are far from alone. Colic affects between 8 and 15 percent of babies. And it experts say it can be devastating.

"It's been linked to parental depression and even thoughts of infanticide," says Dr. J. Marc Rhoads, a pediatric gastroenterologist at Children's Memorial Hermann Hospital who researches colic at the University of Texas at Houston. "So it's a huge problem."

It's unclear what causes colic. But there's some evidence, mostly from Europe, that something might help: Probiotics. Several studies have found that supplements of these "good bacteria" can reduce crying in colicky babies. And a new study published last week in JAMA Pediatrics suggests that a probiotics might prevent colic in the first place.

"We do find that the baby who took the probiotic since the first week of life, they develop less number of colic and constipation in the first month of life so they improve at least the symptoms," says Dr. Flavia Indrio, a pediatric gastroenterologist at the University of Bari in Italy, who led the study.

The babies in that study were given a form of Lactobacillus reuteri.

What Are Those Microbes Doing?

Confusion At The Yogurt Aisle? Time for Probiotics 101

"There are a number of effects that we know probiotics can have," says Dr. Robert Shulman, a professor of pediatrics at Baylor College of Medicine. For example, probiotics may affect the immune system, improve the lining of the intestine and influence the balance of bacteria living in the digestive system, Shulman says.

But "we don't really know really in babies with colic exactly how these probiotics are working," Shulman adds.

Shulman and others caution that much more research is needed before babies are routinely given probiotics. And while probiotics seem safe, it's too soon to know for sure that there aren't any long-term risks.

Rhoads has just started a clinical trial testing a probiotic on colicky babies. Melissa Shenewa signed up her baby.

"So we're just waiting for that to kick in, and hopefully that works," she says.

In the meantime, there are many probiotics already being sold for colic in drug stores and supermarkets. Even some skeptical doctors say they'd probably try one if they had a colicky baby themselves.