Accessibility links
Mild-Mannered Stingrays Can Inflict A World Of Hurt : Shots - Health News These cousins of the shark send thousands of waders and surfers yelping for medical help each year. A powerful toxin in the barb of the ray's tail triggers a "knifelike pain" that can last for hours. Best prevention? Do the "stingray shuffle." 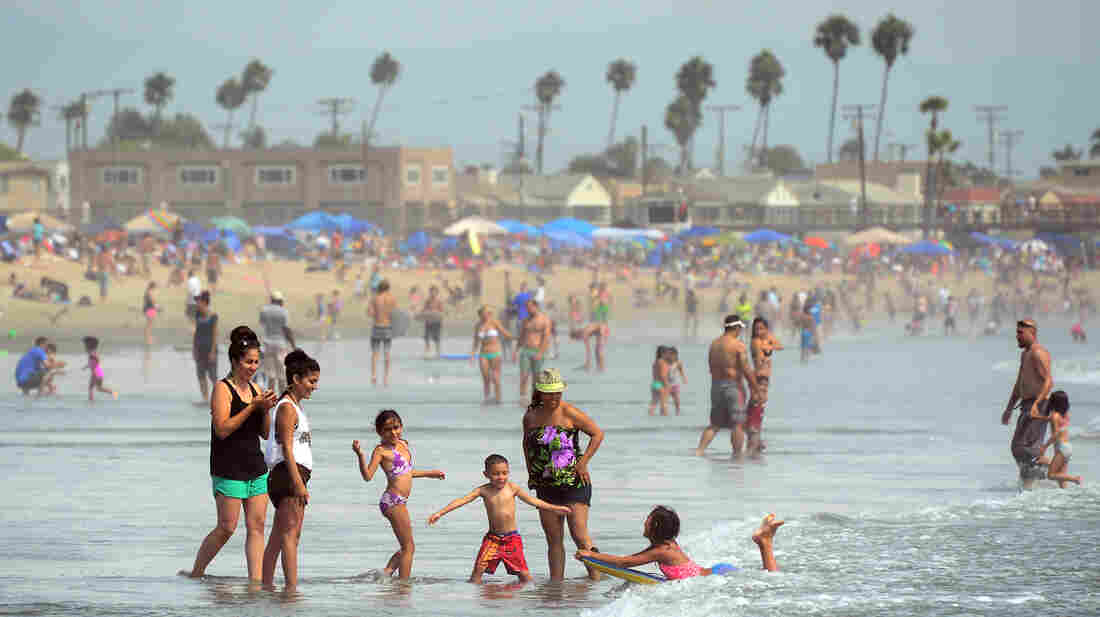 About 16,000 stingrays live along the shoreline of Seal Beach in Southern California, inflicting around 400 injuries each year. Frederic J. Brown/AFP/Getty Images hide caption 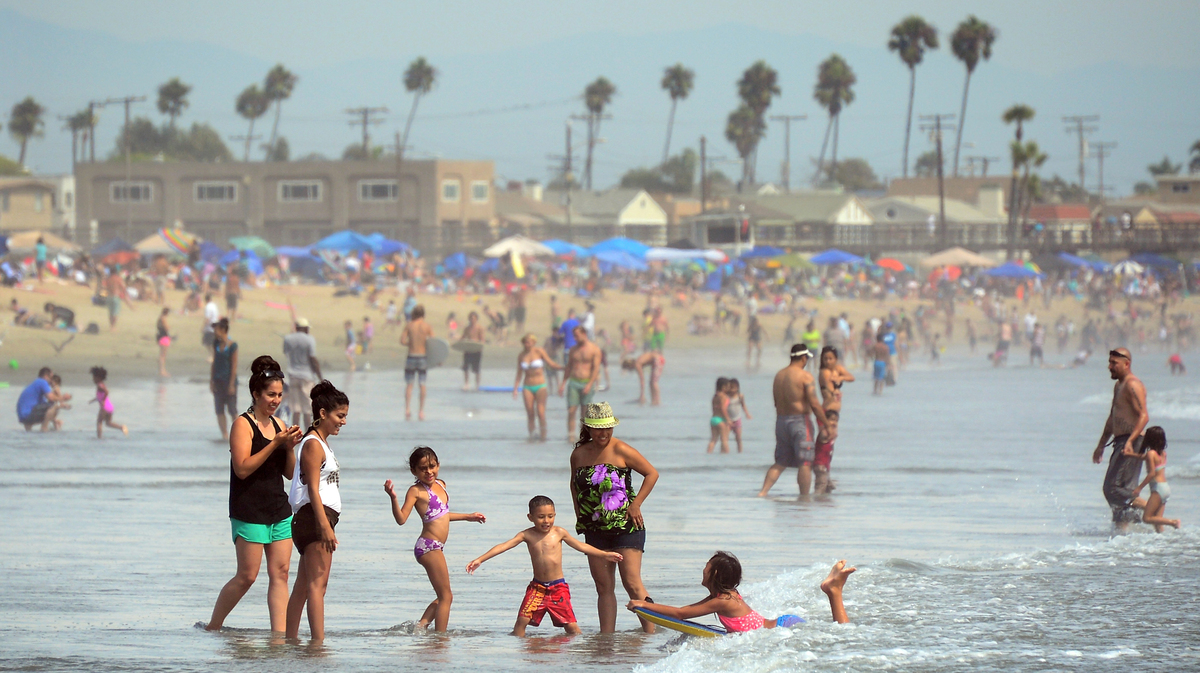 About 16,000 stingrays live along the shoreline of Seal Beach in Southern California, inflicting around 400 injuries each year.

Want to get away? Thinking about a place with warm water and soft sand? Sounds nice. But think twice before you wade into that inviting surf. Chances are there are stingrays in the area.

Every year, these timid, shellfish-eating cousins of the shark inflict excruciating injuries on thousands of swimmers and surfers from the Bahamas to Bahrain to both coasts of the United States.

... a much deeper, darker migrainous-type pain — almost like you put your foot or ankle in a vise and twisted it.

One of last year's victims was Eric Stern, a doctor from Washington, D.C., who was giving a surfing lesson to his sister in August near Santa Monica, Calif. He remembers casually hopping off his board into waist-deep water.

Stern wondered at first whether a shark had bitten him. "The bleeding was so pronounced from what appeared to be a 2-inch to 3-inch gash," he says. "I still wasn't thinking stingray."

But when lifeguards arrived, they told him he was the third stingray victim they'd seen that day. And by that time, Stern says, the injury no longer felt like a bite or a cut.

"The pain had transitioned already to a much deeper, darker migrainous-type pain," he says. "Almost like you put your foot or ankle in a vise and twisted it." 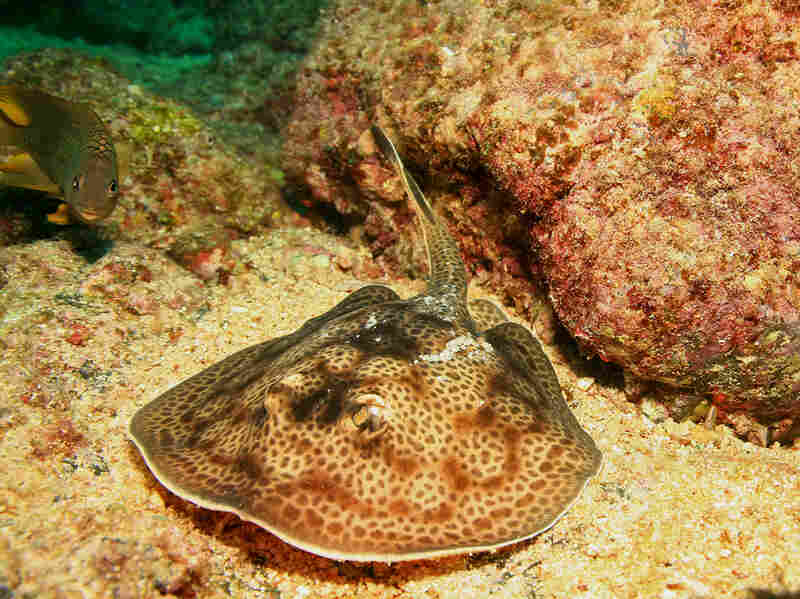 The round stingray is native to the eastern Pacific coast and is notorious for injuring swimmers and surfers. laszlo-photo/Flickr hide caption

In a marine lab at California State University, Long Beach — an hour's drive south of where Stern got injured — marine biologist Chris Lowe says the intense pain of a stingray injury comes from a powerful toxin secreted by the animal's tail.

"That toxin causes blood vessels to constrict, reducing blood flow," Lowe says. "It causes this intense pain sensation — a throbbing, kind of aching pain sensation. And it literally takes hours to go away."

But if you've ever been unlucky enough to feel that pain, don't blame the stingray, Lowe says. They only sting in self-defense. And the round stingray that probably got Stern is especially shy, he adds.

In Lowe's lab, a round stingray hides at the sandy bottom of a tank. At first, it's hard to tell that there is a stingray there because, as Lowe says, "the name of their game is disappearing."

But eventually, you can make out a faint outline in the sand about the size of a dinner plate, along with two eyes and two nostrillike openings called spiracles.

As he scoops the stingray into a net, Lowe explains how Eric Stern's foot got filleted. He points to the inch-long spine that's almost concealed in a sheath at the end of the animal's whiplike tail.

"When you ... harass this ray or accidentally step on it," Lowe says, "it has the ability to quickly flick its tail up. And that barb comes up like an arrow point."

Larger stingrays, like the Australian bull ray, can have spines "the size of a steak knife," Lowe says. It was one of these large rays on Australia's Great Barrier Reef that killed Steve Irwin, host of The Crocodile Hunter TV show, in 2006.

"Believe it or not, Steve Irwin was not the only fatality," Lowe says. "About every five or six years or so, somebody is killed by one of those large stingrays."

Although there are no good statistics on stingray injuries, what data there are suggest that thousands of people are stung each year worldwide and that the number may be rising.

In places like California, stingray populations appear to be growing because there are fewer predators, like sharks, seals and sea lions, Lowe says. Also, more and more people around the world are spending time at the beach.

"I get calls from resort owners on the East Coast — [and] even in the Middle East, where they have really high-end resorts," Lowe says. "They have stingrays in those areas. They have had injuries, and they call us up asking us what should they do."

People have been asking that question for a long time at Seal Beach, which is just a couple of miles from Lowe's lab. Several years ago, a census of rays on this beach found that about 16,000 rays live along just a few hundred yards of shoreline. And, not surprisingly, the area reports more stingray injuries than any place on Earth — about 400 a year. 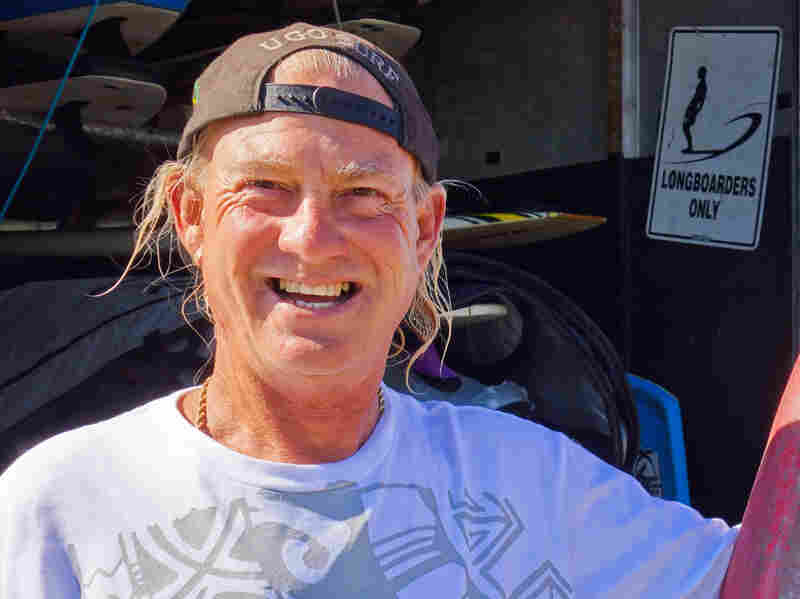 Take a stroll down Seal Beach, and there's a good chance you'll run into Michael Pless, an instructor at M&M Surfing School. "I'm known as the king of stingray stings," he says.

He says he gives all of his surfing students a lesson in how to do the "stingray shuffle," which involves shuffling your feet along the sand so the stingrays know you're coming and you don't step on one.

Signs in parking lots around Seal Beach warn of stingrays, and lifeguards also try to help beachgoers avoid a painful sting. But many still learn about the dangers the hard way, says Nick Bolin, a marine safety officer.

"Usually our tower guards will spot them seconds after they've been stung because they'll come hopping out of the water," he says. "We'll take them back to our lifeguard headquarters, where we have a dedicated lifeguard assigned to the stingray shift, and we soak the foot in hot water until the pain subsides enough that they can go on their own way."

When the beach is busy and the tide is low, there may be dozens of victims, Bolin says. "We've had days where our hot water heater actually can't even keep up with the [number of] stings."

Soaking a sting in very hot water is critical, as the heat neutralizes the stingray toxin.

"The moment you take your foot out of the hot water, the pain just shoots back up within five to 10 seconds," says Stern, the doctor who got stung while surfing near Santa Monica. "It's really quite remarkable."

Unfortunately for Stern, several hours of hot water treatment wasn't the end of his stingray adventure. The gash on his foot had to be sewn up at a local emergency room. And once the wound healed, Stern realized he had another problem.

"I began to notice that I didn't have any sensation in the dorsum — the top — of my foot around the base of my fourth and fifth toes," he says.

The sting had caused nerve damage, and Stern eventually needed surgery. But he's better now and ready to get back in the California surf. "This time," he says, "I think I'm going to stay on my board until I'm out in deep waters."