Accessibility links
Diabetes, Cost Of Care Top Health Concerns For U.S. Latinos : Shots - Health News A poll by NPR, the Robert Wood Johnson Foundation and the Harvard School of Public Health finds that nearly 1 in 5 Latinos say diabetes is the major health concern for themselves and their family. In East Los Angeles, where obesity and diabetes are common, community activists are committed to turning the problem around. 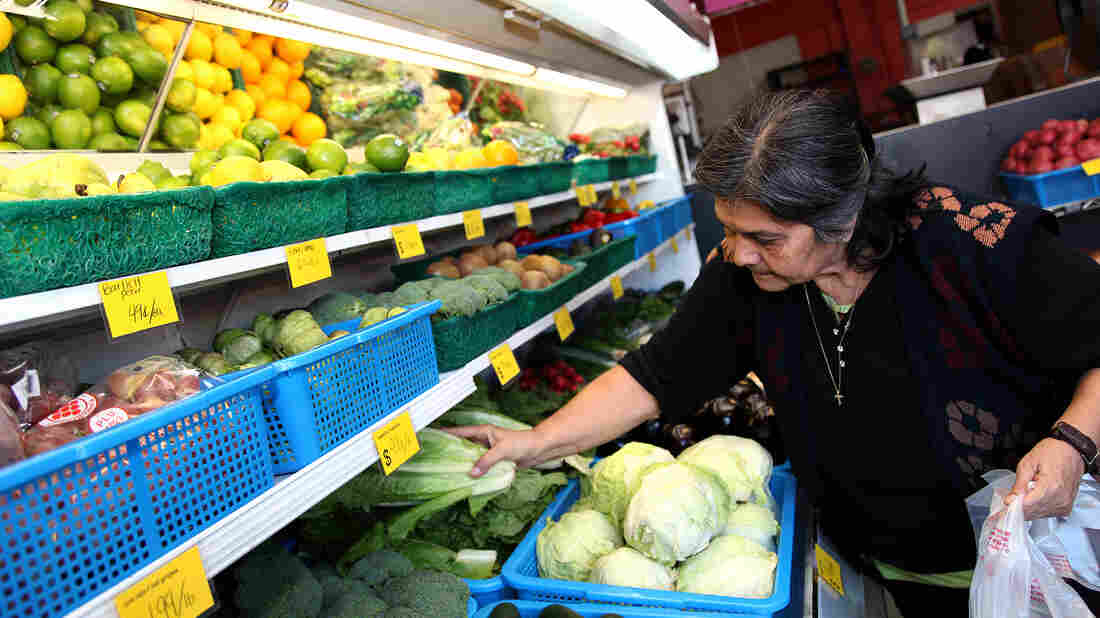 A customer buys produce at the Euclid Market in the Boyle Heights neighborhood of East Los Angeles in December. The market was reopened in 2013 as part of a project to promote healthy eating among the city's Hispanic population. Courtesy of UCLA Fielding School of Public Health hide caption 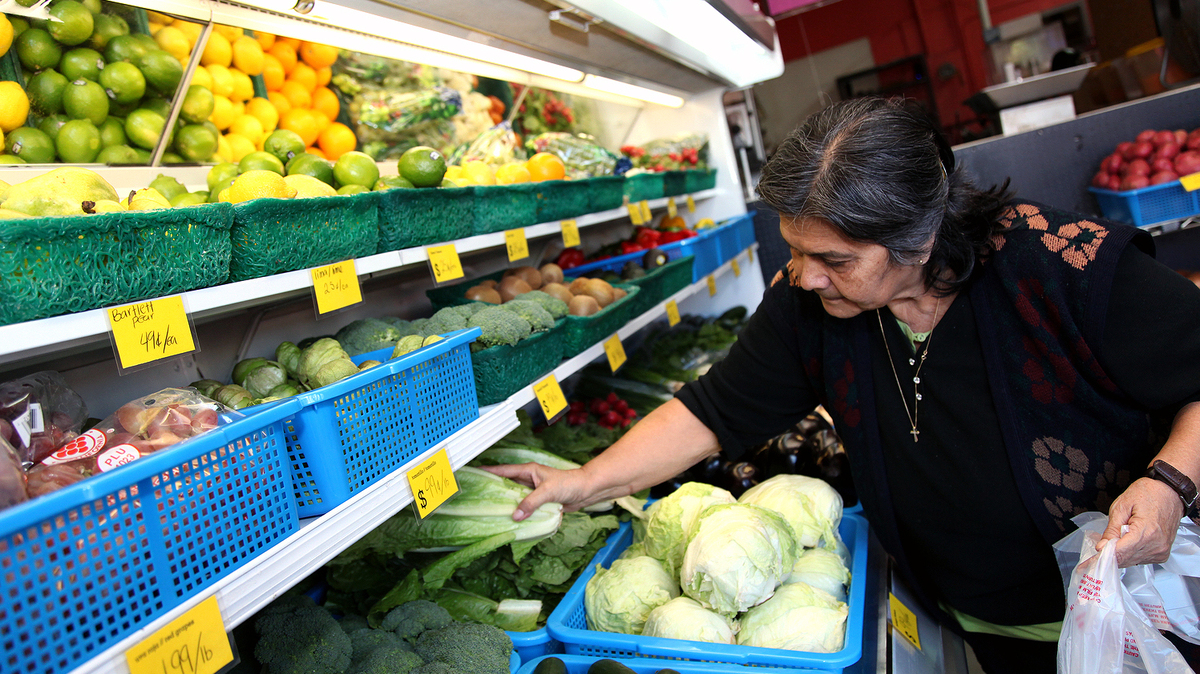 A customer buys produce at the Euclid Market in the Boyle Heights neighborhood of East Los Angeles in December. The market was reopened in 2013 as part of a project to promote healthy eating among the city's Hispanic population.

Latino immigrants in the U.S. say the quality and affordability of health care is better in the U.S. than in the countries they came from, according to the latest survey by NPR, the Robert Wood Johnson Foundation and the Harvard School of Public Health. But many report having health care problems.

A New Poll Takes A Look At Views From Latino America

But the health issue that Latinos said is most concerning for them and their families — whether they were born in the U.S. or immigrated here — is diabetes. Last year, in another poll, Latinos said cancer was the biggest problem facing the country.

Hispanic populations have a high prevalence of Type 2 diabetes. About 10 percent of Latino adults have been diagnosed with it or have "prediabetes," a stage of the disease that often goes undetected.

One important factor: Latinos may be genetically predisposed to the disease — a risk that can be aggravated by environment and diet.

Take the example of East Los Angeles, an area heavily populated by Mexican-Americans.

Like many of her friends and family members, Rebecca Martinez-Rocha says she struggles with her weight. At one point, she weighed more than 320 pounds.

"I don't think I realized it at the time, whether it was denial or I stopped getting on a scale," she says, "but I was morbidly obese."

And, as it turns out, Martinez-Rocha was prediabetic, a diagnosis she received at a local health clinic.

"I wasn't aware of the fact that I was ill; I figured that I was relatively young, in my 20s and early 30s," she says. "It was kind of one of those 'aha' moments in life, where you look at it and put it all together and you think, 'How did I get here?' " 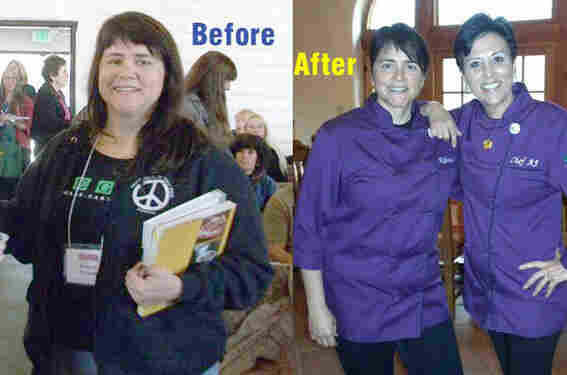 The doctor who diagnosed Martinez-Rocha's condition is Anne Peters, a diabetes specialist and professor at University of Southern California's Keck School of Medicine. She's also the director of a diabetes program at Roybal Comprehensive Health Center.

Peters says Type 2 diabetes is the "plague" of the Latino community she treats: "Individuals here are getting diabetes at rates we've not seen before."

About 12 percent of the Latino population she sees has diabetes. Peters projects that number will climb to nearly 30 percent over the next few decades if nothing changes in the environment or diet of local residents.

Peters told Martinez-Rocha she was on her way to getting insulin-dependent Type 2 diabetes. Martinez-Rocha says she got very scared and made major changes. She lost 160 pounds.

But many patients don't do that, in large part because prediabetes is often "silent." Unless people go to a doctor and get their blood sugar measured, they'll never know they have it.

And that's a shame, Peters says, because prediabetes can be turned around. "If somebody has prediabetes, they need to lose weight — not a lot of weight, maybe only 10 to 15 pounds," she says.

They "don't have to become skinny" to benefit, she adds. Studies show that moderate weight loss can reduce diabetes risk by half.

Losing weight is hard for many people. But Martinez-Rocha says it's even harder when you live in a neighborhood that offers lots of high-fat, high-salt and high-sugar food.

"If you drive around my neighborhood, every corner you'll see a taco stand, a fast-food restaurant, a sweet-bread store, places selling tamales or fried food," Martinez-Rocha says.

In NPR's poll with the Robert Wood Johnson Foundation and Harvard School of Public Health, 1 in 5 Mexican-Americans rated the availability of fresh fruits and vegetables in their neighborhoods as fair or poor.

Alex Ortega, a public health researcher and professor of public health at UCLA, calls neighborhoods like this, where healthy food is hard to come by, "food swamps." 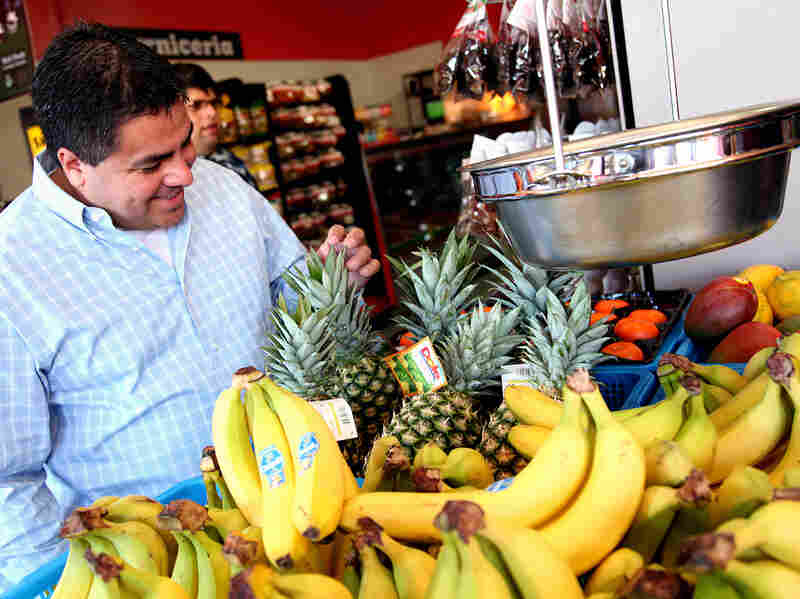 Alex Ortega, a professor of public health at UCLA, looks over the produce at the market he and other community members helped reopen. Courtesy of UCLA Fielding School of Public Health hide caption 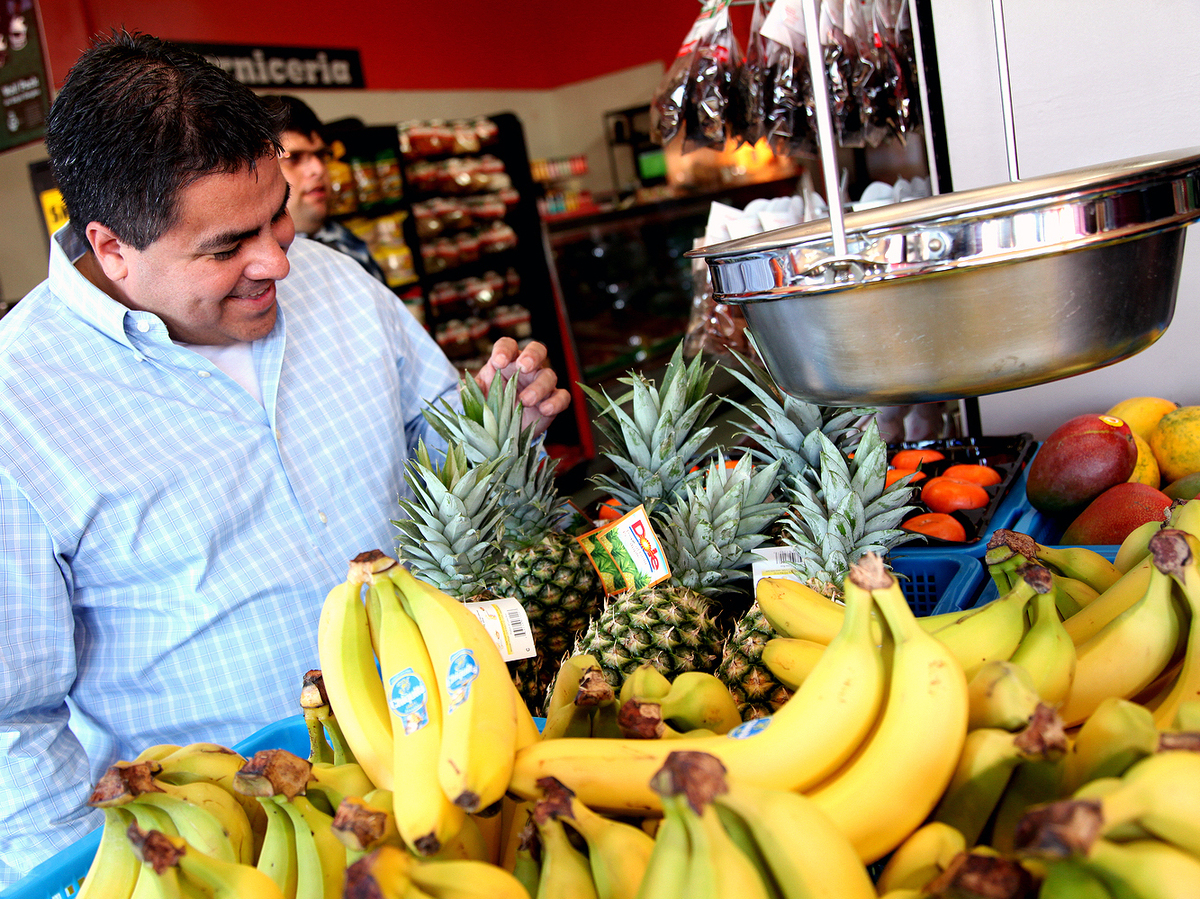 Alex Ortega, a professor of public health at UCLA, looks over the produce at the market he and other community members helped reopen.

Walk into the typical corner market, he says, and the first things you'll see are signs for liquor and lottery tickets, cigarettes, soda and chips. "They might sell some fruits and vegetables, but they're typically in the back of the store and in very poor quality," Ortega says.

Previous studies have shown that obesity rates among immigrants increase as their duration of residence in the U.S. increases. They suggest this might be attributable in part to changes in lifestyle, including an unhealthy diet.

Ortega is committed to turning the Latino diet around. As director of the UCLA-USC Center for Population Health and Health Disparities, Ortega is heading a project to convert corner stores in low-income neighborhoods.

About a month ago, Ortega, along with community activists, local high school students and store owner Maria Avila, transformed the Euclid Market in the Boyle Heights section of East Los Angeles. They added windows and a new paint job, and rearranged and organized shelving. But most importantly, Ortega says, they added healthful foods.

The newly converted store opened to the public in December. Today, when you walk in the door, the first things you see aren't cigarettes and junk food — they're fresh fruits and vegetables.

This is the fourth corner store in the area to be converted. Ortega is still collecting data, but anecdotally, he says, store owners tell him they have more customers, they're selling more fruits and vegetables, and they're making more money. 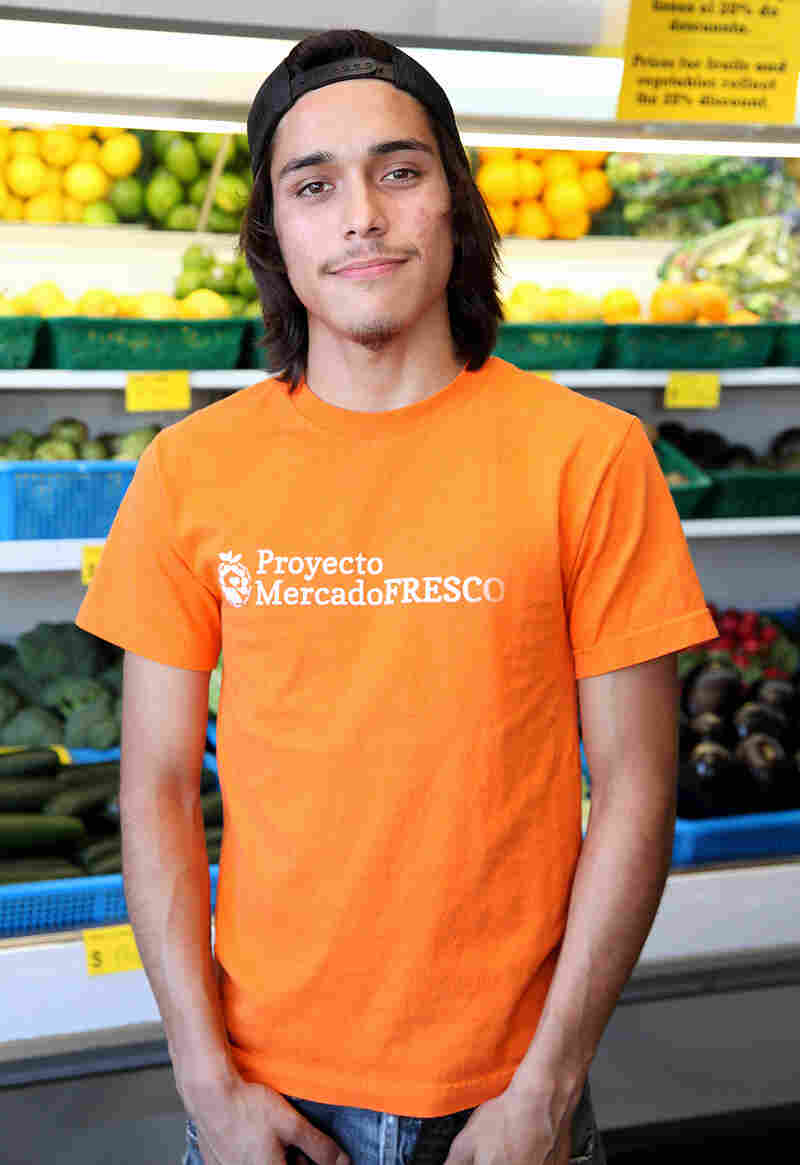 High school senior Steven Cardona, 17, has worked with the store conversion project for the past year. He says learning about nutrition changed his family's diet dramatically. Courtesy of UCLA Fielding School of Public Health hide caption 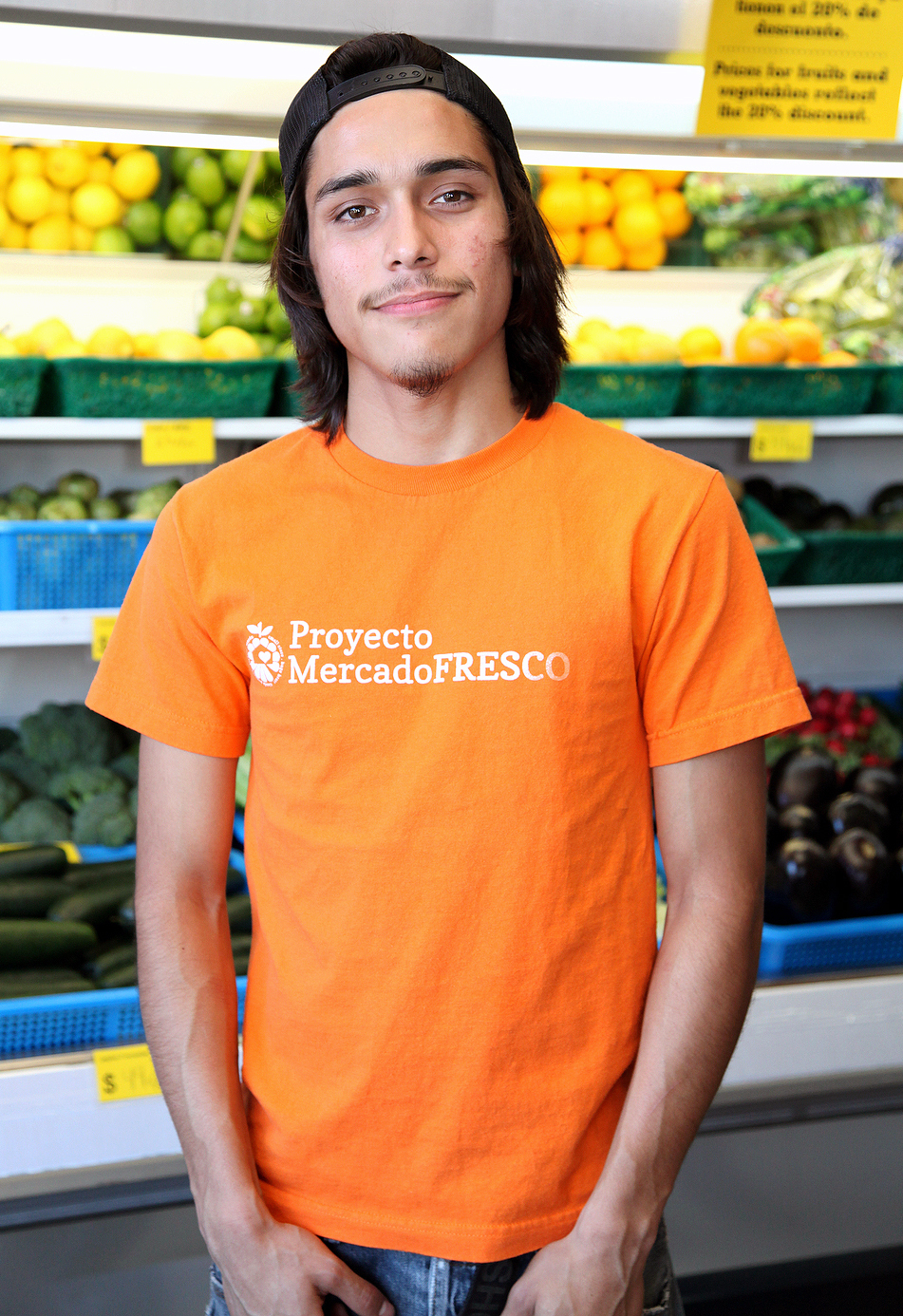 High school senior Steven Cardona, 17, has worked with the store conversion project for the past year. He says learning about nutrition changed his family's diet dramatically.

But the big question is whether the availability of fresh fruits and vegetables will make a difference in the health of the neighborhood and the epidemic of diabetes.

For college freshman DeeDee Barba, it has made a difference. She has taken part in the store conversion project for two years. Not only has she learned about marketing and sales, but she's also learned about nutrition. As a result, she says, her family now eats more healthfully. Part of that includes no dressing on salads.

"We now eat our salads with olive oil and lemon, and it's actually good," she says. "We eat a lot of fish and chicken; we rarely eat red meat. We eat rice, but we have whole-wheat rice. We don't drink soda anymore — we drink mostly water."

High school senior Steven Cardona, 17, has worked with the store conversion project for the past year. Learning about nutrition, he says, has changed his family's diet dramatically.

"Before, we would eat lots of fast food, but now we eat mostly steamed vegetables, rice, chicken and lean meats," he says. Family members have lost a lot of weight, and everybody reports feeling "better," he says.

Ortega says that's exactly what's hoped for: that the availability of healthy food in low-income neighborhoods like this will make a difference in what residents buy, cook and eat. And that it will mean changing diets and reducing the high rates of obesity and diabetes in the Latino community in East L.A.