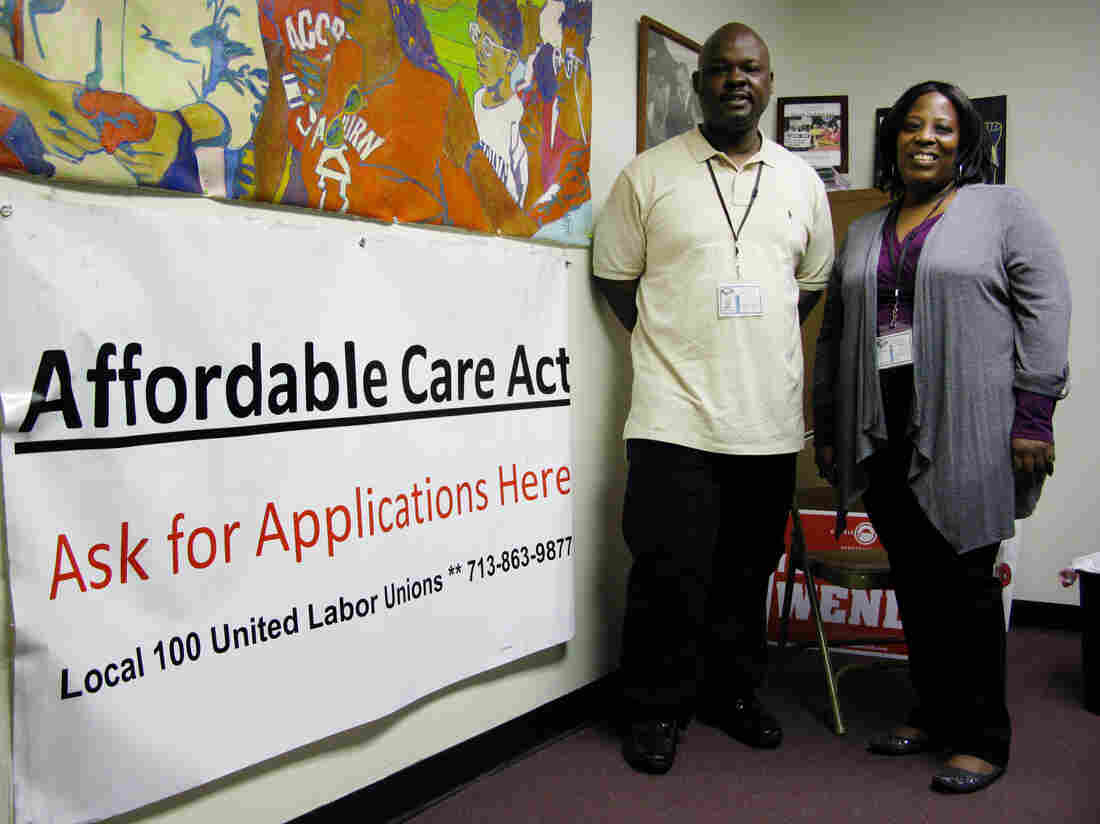 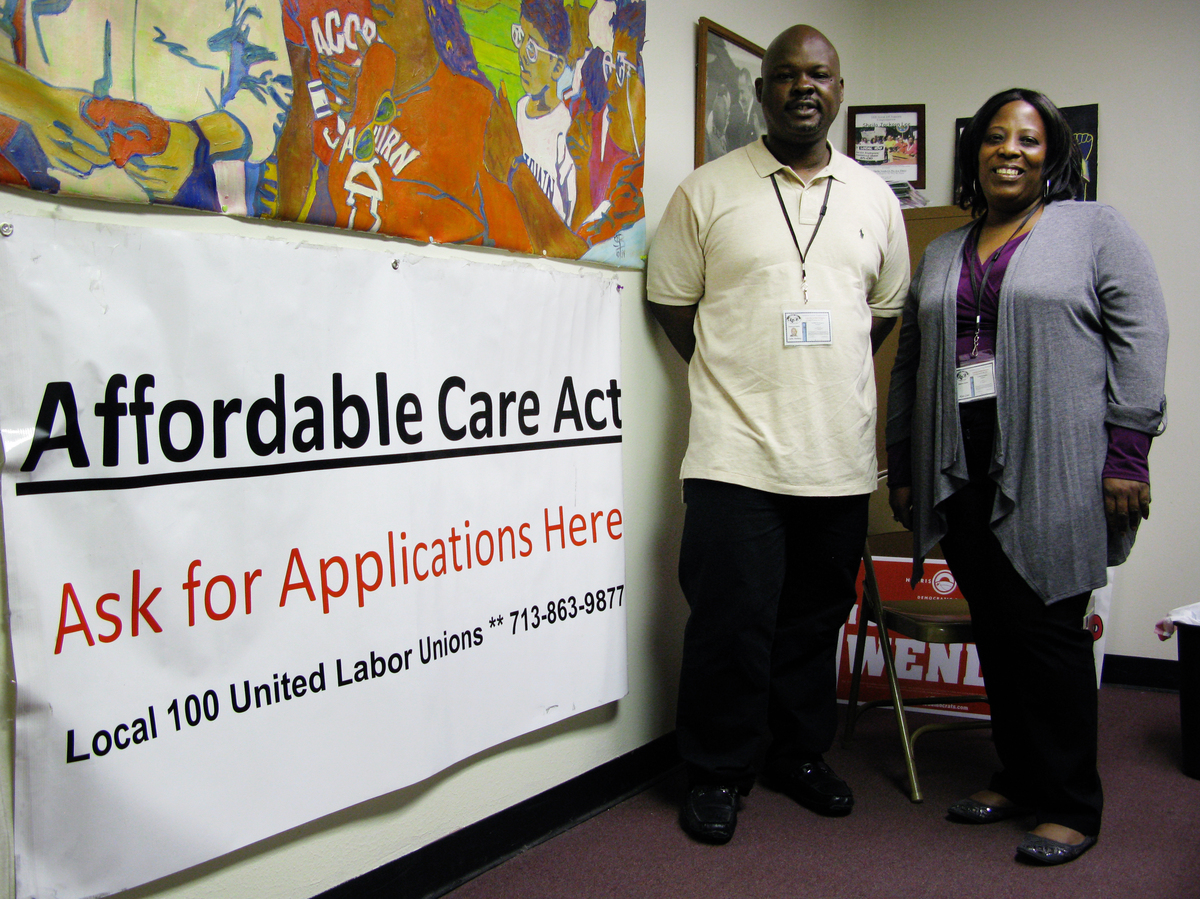 Cedric Anthony and Alysia Greer are two of the navigators working in Houston neighborhoods for United Labor Unions Local 100.

Texas has imposed strict new regulations on the insurance helpers, or navigators, who work in the community to enroll people in health plans under the Affordable Care Act.

The navigators must register with the state, undergo a background check and fingerprinting, and complete 20 hours of additional training — beyond the 20 to 30 hours of federal training they've already received.

There are more than 400 navigators working across Texas, and they have become a symbol of Obamacare as they fan out across neighborhoods armed with laptops and brochures.

Still, the final regulations are less stringent than originally proposed. After pushback from Democrats and community groups that employ navigators, the Texas Department of Insurance reduced the training requirement from 40 to 20 hours, and dropped a $50 registration fee. Navigators will also have until May 1 to complete their training. That means coursework won't interfere with an expected enrollment rush before the March 31 deadline.

Texas Sen. John Cornyn, a Republican, praised the work of the Texas Department of Insurance, which released the final rules Tuesday.

"Obamacare presents enough problems for Texans without the risk of a convicted felon handling their personal information," he said in a statement. "These are basic requirements for screening individuals hired with taxpayer money to handle sensitive consumer information, and there is no excuse for the Obama Administration's failure to implement them from day one."

But others criticized the regulations as an attempt to block the law.

"It's a federal program," said Rep. Sheila Jackson Lee, a Houston Democrat. "The state has no right to interfere with burdensome regulations. It's almost similar to blocking someone from the right to vote because of the color of their skin. Now you're blocking a sick person, or a person that is uninsured, from getting access to information."

Some navigators questioned the necessity of the rules, and the associated image of navigators as potentially untrustworthy or unqualified.

"It's misinformation that's being put out to the public. Sometimes hysteria can be created; it's not legitimate," says Alysia Greer, a Houston-based navigator with United Labor Unions Local 100.

The union employs 17 navigators in Texas, most of them around Houston and Dallas. All of those navigators, and many employed by other groups, have already undergone background checks.

Cedric Anthony, another navigator with the union, said the rhetoric around navigators is "giving a bad name to actually good people."

He says the additional training will be redundant and distract from the mission.

"We're getting out in the community, we're outreaching, and I just feel it's just going to be more hours in the classroom actually learning instead of the hours we could be putting manpower on the streets getting people signed up," he said.

The department estimated that the additional training could cost up to $400 per navigator. The community groups will also have to obtain liability protection for their navigators, such as an insurance policy or surety bond. The regulations also prohibit navigators from:

Orell Fitzsimmons, field director for United Labor Unions Local 100, says his navigators would never have engaged in those activities anyway.

"If they want to challenge us, that's fine," he said defiantly. "If they want fingerprints, they can have them. We're not hiding anything."

But Fitzsimmons says he believes the regulations are a blatant and partisan attempt to hinder enrollment.

"It's pretty clear to me that the governor wants sick people to stay sick, and he doesn't want to have well care, and he doesn't believe in Obamacare," he says. "And that's fine, but we do live in a democracy. And the democracy back in 2010 voted (for the law.)"

Seventeen states have passed laws regulating navigators. Two states, Tennessee and Missouri, have already faced lawsuits over the restrictions. A federal judge ruled on the Missouri case Thursday, saying that states that opted to have the federal government run their exchange could not actually impose state regulations on top of the federal ones.

This story is part of a collaboration among NPR, KUHF and Kaiser Health News.