Accessibility links
How Parents And The Internet Transformed Clubfoot Treatment : Shots - Health News Clubfoot is a common birth defect that can make walking difficult. It used to be treated with surgery, which could have serious side effects, but a simple nonsurgical solution is now the norm. It took years of pushing by parents for that treatment to become accepted. 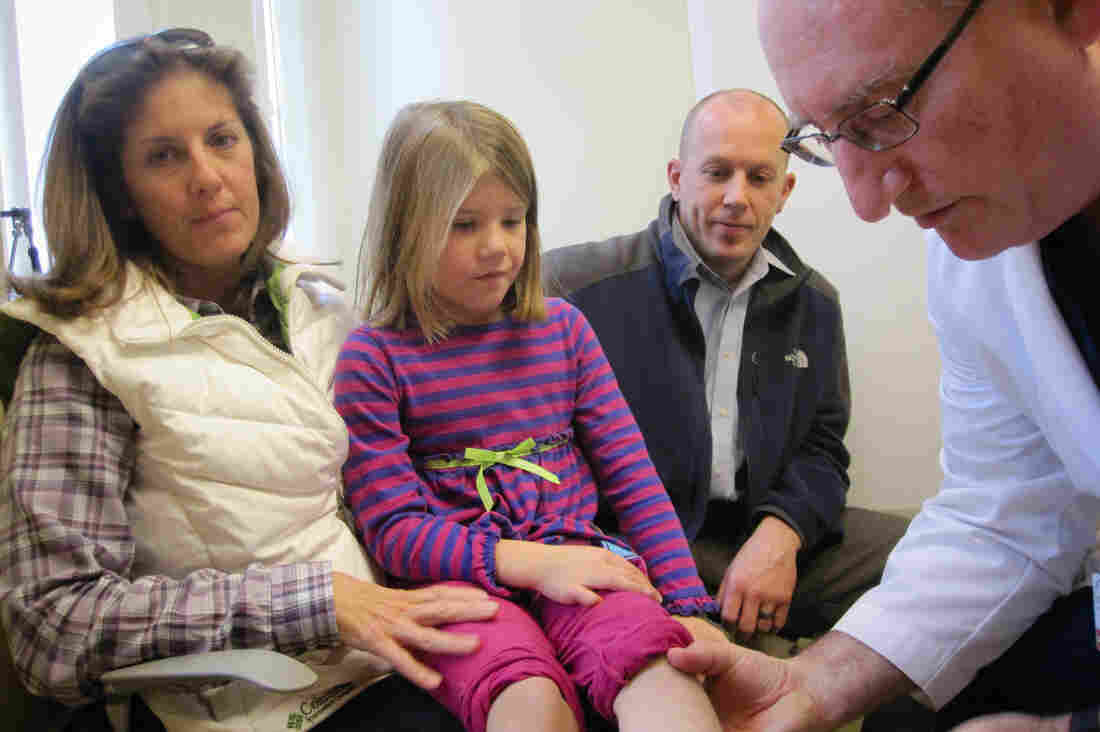 Alice Snyder, with her parents Mary and Ryan, during a checkup with Dr. John Herzenberg, who treated her clubfoot without surgery. Jenny Gold/Kaiser Health News hide caption

Mary Snyder found out at her 19-week ultrasound that her unborn baby had clubfoot. Both of the fetus's feet were completely turned inward, forming the twisted U-shape typical of clubfoot.

The condition is one of the most common birth defects, affecting about 1 out of every 1,000 babies, but that was little comfort to Snyder. 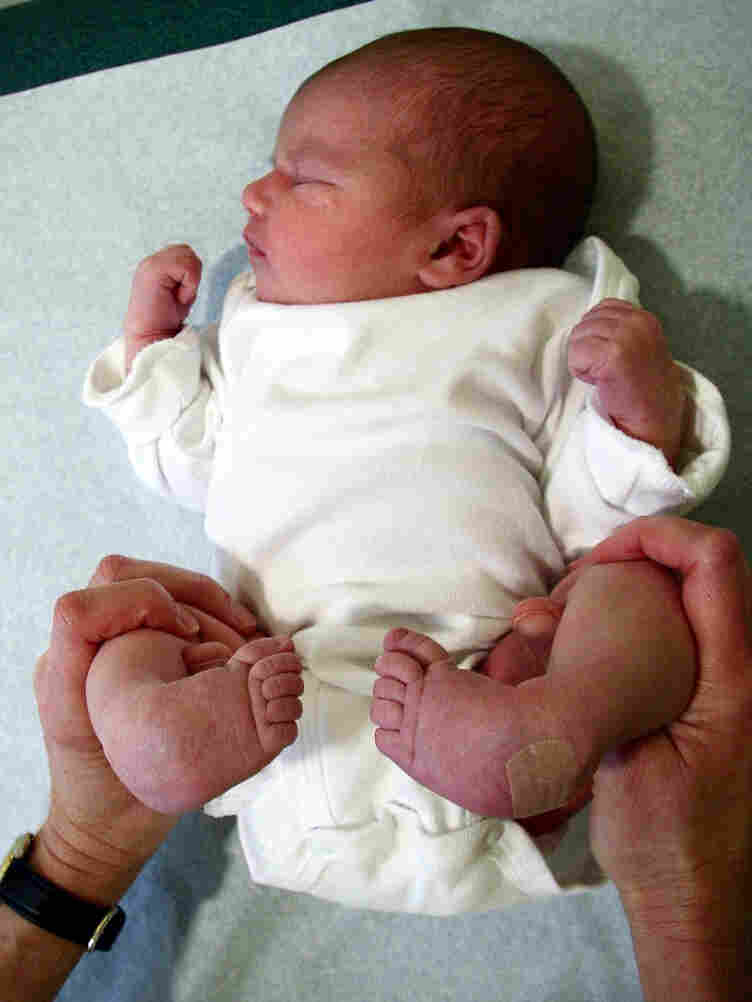 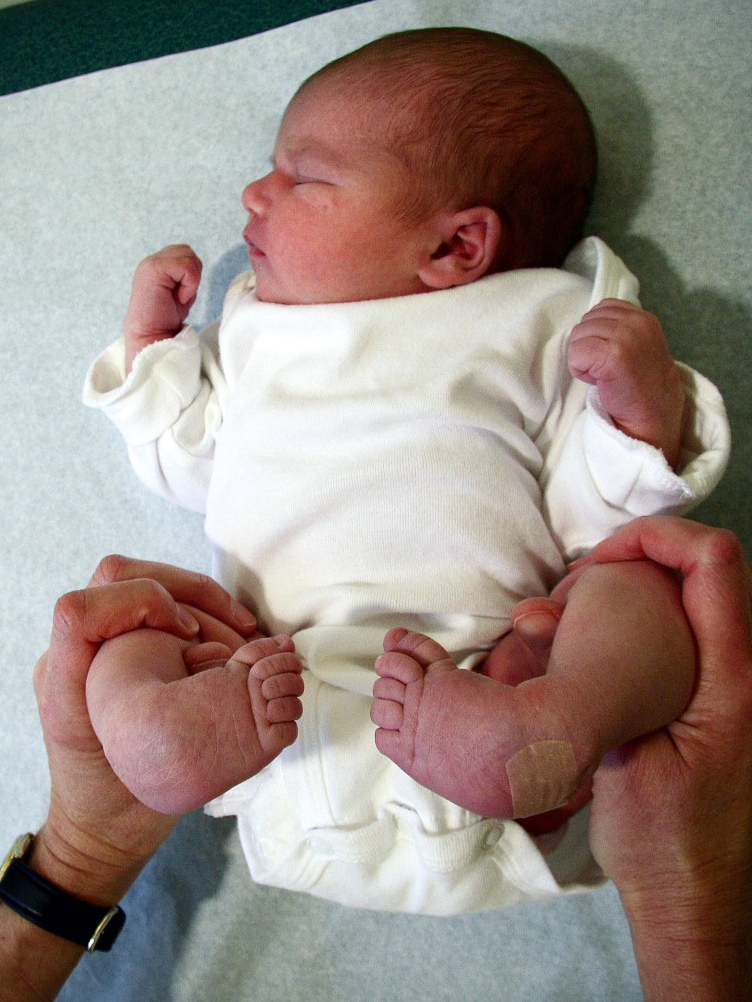 Alice Snyder was born with clubfoot, a common birth defect.

"It was terrifying," remembers Snyder, who lives in Towson, Md. "It was very emotional. We did a lot of testing and everything to make sure she was going to be OK, but you never really know until you see them when they're born."

Just a decade ago, up to 90 percent of babies like Snyder's daughter Alice were treated with surgery that usually had to be repeated several times. That created a buildup of scar tissue that often left patients with a lifetime of chronic pain, stiffness, arthritis and medical bills. But with the help of a simple, noninvasive solution and an Internet campaign led by parents, the course of treatment and likely outcomes have changed completely.

Alice, who is now 6, has a checkup every year with Dr. John Herzenberg, an orthopedic surgeon at Sinai Hospital in Baltimore. Alice happily follows the doctor's instructions, walking back and forth across the exam room, then on her tippy toes, and finally with her feet turned out like a duck.

To the untrained eye, Alice looks perfectly normal. Her feet are turned out as if they'd been that way since birth. She has never had surgery.

Instead, Herzenberg used what's called the Ponseti Method. Doctors begin by applying a series of full-leg casts to slowly turn out the infant's flexible feet. Casts are changed weekly for three to eight weeks.

Before applying a final cast, which stays on for three weeks, a small incision is made in the Achilles tendon. Then the child wears a special set of boots connected by a bar at night for a few years to make sure the feet stay in the right position — think of it as a retainer worn after braces are removed from teeth. 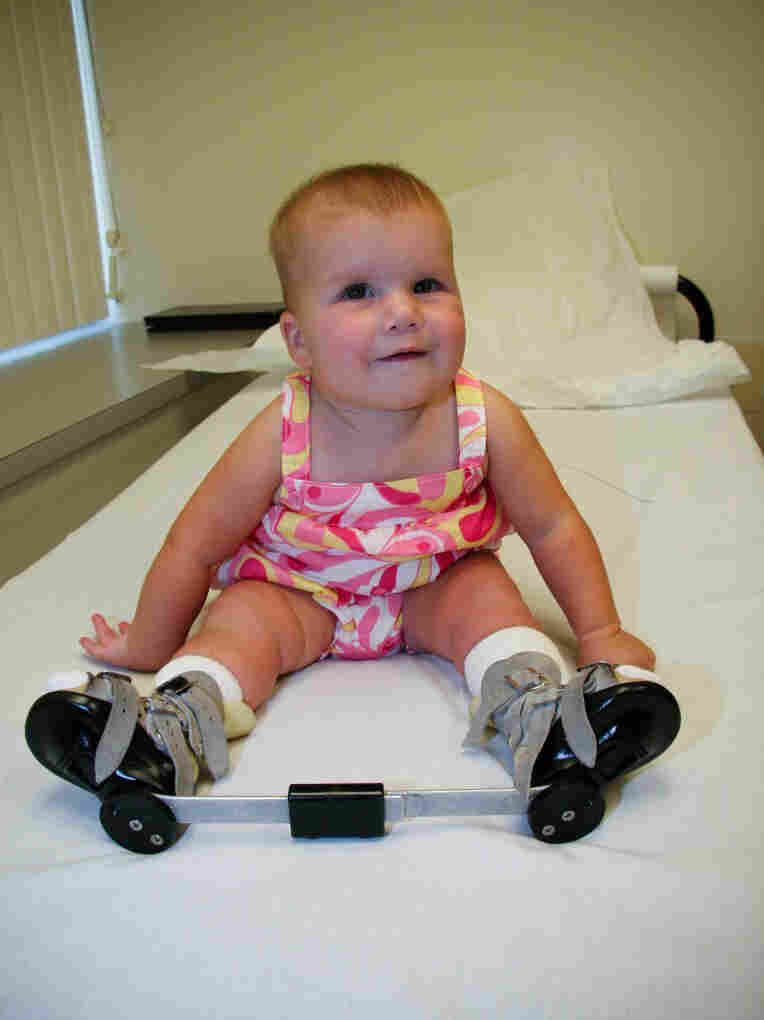 In 2008, Alice showed off the brace she wore at night to keep her feet from turning in. Alvien Lee/Sinai Hospital hide caption 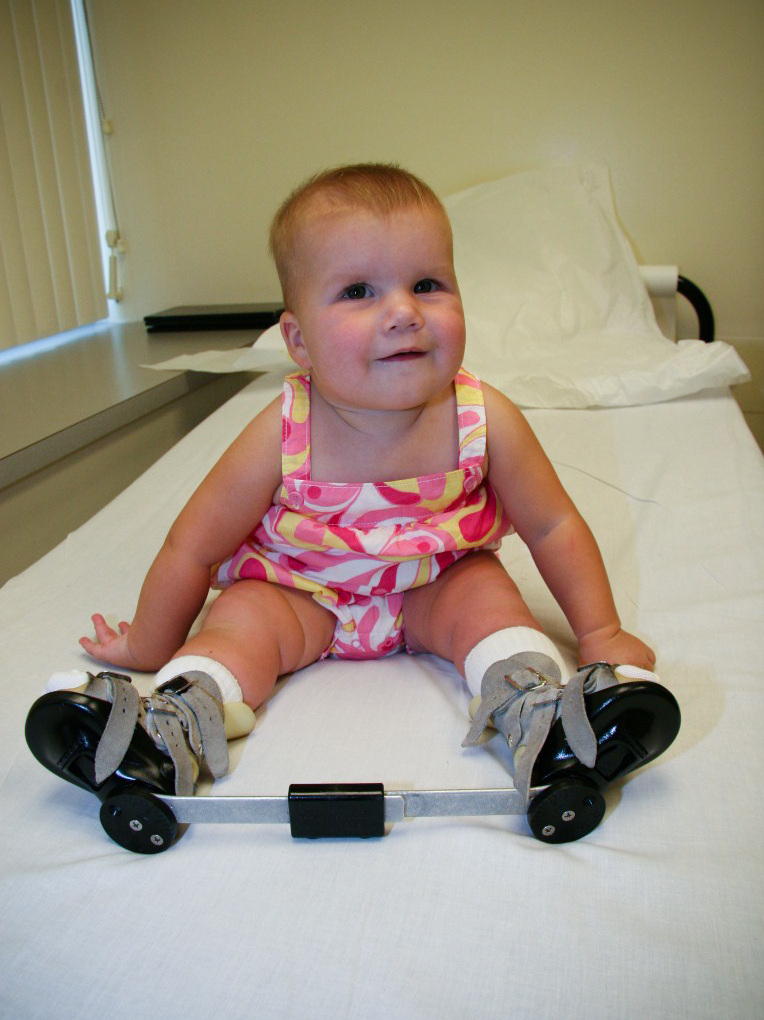 In 2008, Alice showed off the brace she wore at night to keep her feet from turning in.

"In the past, before I learned Ponseti, guaranteed I would literally have had to do a surgical operation to take apart and put together the entire foot," says Herzenberg, looking at a photo of Alice's feet at birth, which formed a bowed U-shape beneath her tiny torso.

The casting technique was developed by Dr. Ignacio Ponseti at the University of Iowa in the 1950s. The Spanish physician discovered that if an infant's feet were slowly turned out over the first few months of life, the foot could be coaxed into a normal position.

Unlike the traditional surgical method, the Ponseti method is pretty much painless, and patients who receive it usually have a complete recovery, with no long-term discomfort. It also costs less. Ponseti spent the next 50 years tirelessly trying to get other doctors to accept it, but with little success.

"People were falling over themselves to do fancy invasive surgery, and this one strange old guy who speaks softly with a Spanish accent in Iowa was getting sort of ignored by the drumbeat of people who were in favor of surgery," says Herzenberg, who is one of the foremost practitioners of the Ponseti method today.

Surgeons are trained to operate, explains Herzenberg, and usually that's the way they make money. The Ponseti method brings in a lot less for orthopedists. For about 50 years, the technique mostly stayed in Iowa.

But then something new came along: the Internet.

When Jennifer Trevillian's daughter was born with clubfoot in 2000, the doctors said surgery was inevitable. "He started talking about her pending surgery before he physically examined her foot," Trevillian remembers. 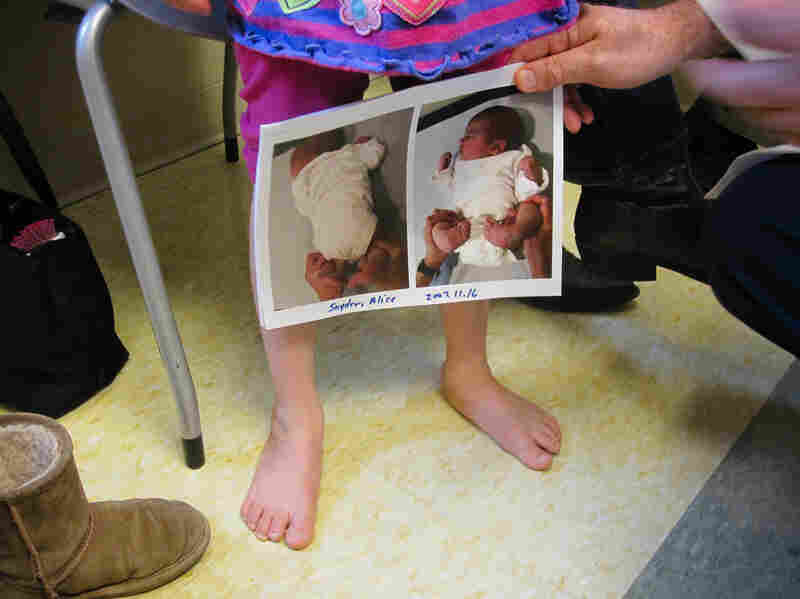 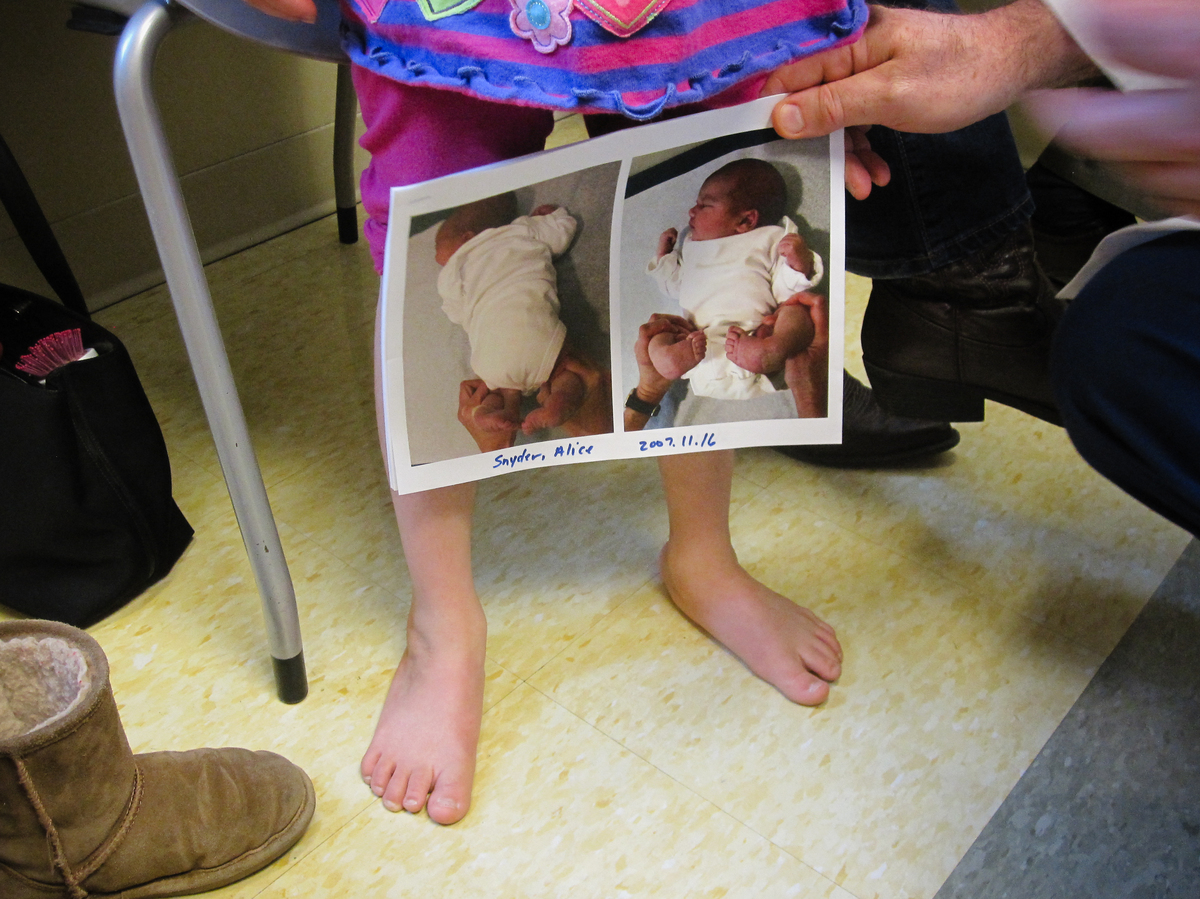 Trevillian started researching the condition on her new dial-up connection. There wasn't much. But she did find a few other parents talking about another option on iVillage, and a new Yahoo support group called NoSurgery4ClubFoot. A few days later, she traveled with her daughter from the family's home in Chatham, Mich., to Iowa to see Dr. Ponseti.

"In the amount of time that we would have just been waiting for her to be big enough to tolerate the anesthesia for the reconstructive surgery she was supposed to have, Dr. Ponseti completely corrected her foot," says Trevillian.

Trevillian joined the small but growing group of parents evangelizing about the Ponseti method online. She built a few websites telling her daughter's story, and she stayed active on the fast-growing Yahoo group. Parents began following each other's advice — choosing to abandon doctors who insisted on surgery and often traveling long distances to find a Ponseti practitioner.

"The way that the clubfoot treatment pendulum has swung is really a classic example of supply and demand — because once parents found out about it, they demanded it for their kids, and it really forced the medical industry to rethink the Ponseti method," says Trevillian.

Herzenberg agrees. "Clubfoot is a real prototype for how the Internet has changed medicine and how parents have been the driving force in many ways," he says.

Today, the Ponseti method is now almost always the treatment of choice for clubfoot and is recommended by the American Academy of Orthopaedic Surgeons. When it is done correctly, 97 percent of children born with clubfoot never need invasive surgery.