Accessibility links
The Strange Case Of Marlise Munoz And John Peter Smith Hospital : Shots - Health News After collapsing on her kitchen floor, Munoz was hospitalized and kept on life support despite her wishes. A Texas law protects a hospital from liability as long it keeps a pregnant patient on life support. 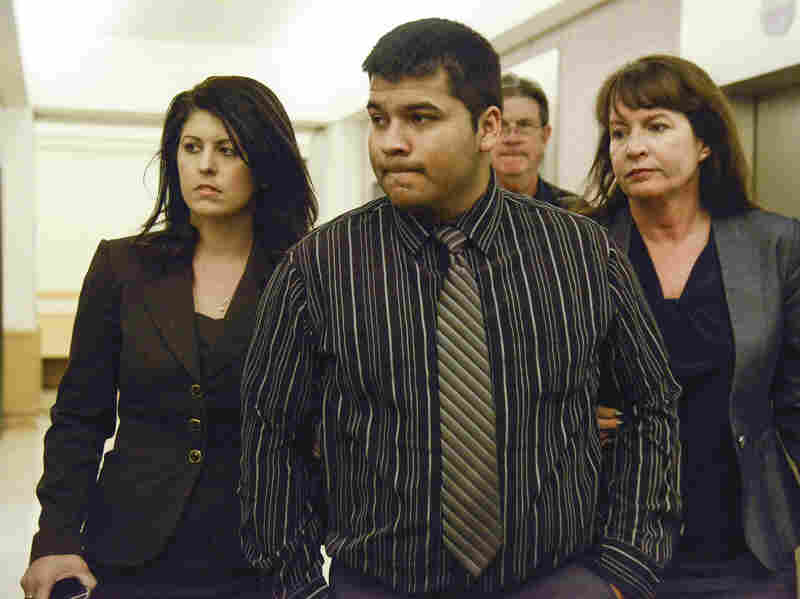 It would have been hard to find a happier man than Erick Munoz on that Tuesday morning before Thanksgiving.

With a healthy and delightful son toddling around the house, and his beautiful and successful wife pregnant with their second child, the fire department paramedic had everything in life that's really important. So it must have been with a feeling of disbelief and horror that Munoz knelt across the nearly lifeless body of his wife, Marlise, on the kitchen floor at 2 a.m., his fingers linking across her heart, arms pumping away in vain.

She'd gotten up to make a bottle for their son and had been lying there for an hour not breathing before he found her.

What little life she clung to would soon slip away. On Thanksgiving Day, doctors told her husband what he already knew: His 33-year-old wife was gone. A blood clot in her lungs had killed her, perhaps. They weren't completely sure.

Doctors informed Munoz and Marlise's parents, Lynne and Ernest Machado, that the hospital wasn't going to disconnect Marlise from the ventilator. Texas law prohibited it because she was pregnant.

The Texas Advance Directives Act states, "A doctor may not withdraw or withhold life-sustaining treatment from a pregnant patient."

Munoz and his wife's parents told the hospital that Marlise, herself a veteran paramedic, had made it clear to everyone she didn't want to be kept alive by machines under any circumstances. The doctors and the hospital explained that it didn't matter what Marlise or her husband or anyone else wanted — their hands were tied. She would stay on the ventilator until her 14-week-old fetus was delivered or died.

The law protects the hospital from all liability as long as it keeps the pregnant patient on life support. It doesn't actually forbid the hospital to remove support, but the hospital loses its legal immunity if it does. And that seemed to be the guiding light for the lawyers representing John Peter Smith Hospital.

Marlise was dead by Thanksgiving. There was no activity at all in her brain or brain stem. It seemed too macabre to be true, like something out of the book Coma, keeping dead bodies "alive" to harvest their organs.

The media, no surprise, came running. And reporters began looking into this Texas Advance Directives Act, and interviewing its authors.

And the authors told reporters they never meant for their law to be used to keep a pregnant dead woman "alive" until the hospital could deliver the baby. They said if that's what John Peter Smith Hospital was doing, the hospital was misreading the law.

The authors said they intended to keep a pregnant woman who was in a persistent vegetative state on a ventilator until she could deliver, but not a dead pregnant woman. This was a major development in the story, but the hospital remained frozen. Marlise was still in "serious condition," the spokeswoman affirmed.

As the standoff approached the end of its second month, Erick Munoz had had enough. He sued John Peter Smith Hospital for "cruel and obscene mutilation of a corpse," that corpse being the love of his life.

When the case got to court last Friday it quickly fell apart for the hospital. Its lawyers conceded in their filing that Munoz had been brain-dead since Thanksgiving. The hospital also agreed her fetus wasn't viable; like its mother, it had been deprived of oxygen for at least an hour.

The hospital's defense of its conduct was a tortured interpretation of the Texas Advance Directives Act. "If the legislature intended for life sustaining treatment to be withdrawn, allowing the unborn child to die, it could have expressed this intent by adding a second sentence to section 166.049 to the effect that, upon the mother's death, the healthcare providers must withdraw life sustaining treatment and let the unborn child die," the legal response from the hospital said. "It did not so provide."

And so John Peter Smith Hospital maintained a corpse against the wishes of the family, for the protection of a fetus that couldn't live.

As anti-abortion and pro-Munoz protesters demonstrated outside the courtroom, State District Judge R.H. Wallace's ruling was direct and brief. "Mrs. Munoz is dead," he wrote. "Defendants are ordered to pronounce Mrs. Munoz dead and remove the ventilator and all other 'life-sustaining' treatment from the body."

As Wallace's verdict was read, Erick Munoz wept into his hands as his mother-in-law held him in her arms and cried.