Accessibility links
Neanderthal Genes Live On In Our Hair And Skin : Shots - Health News Scientists know that a small percentage of humans' genes came from Neanderthals. But they were surprised to find that one-fifth of Neanderthal genes are in modern humans living today. That includes genes associated with diseases including Type 2 diabetes, Crohn's disease and lupus. 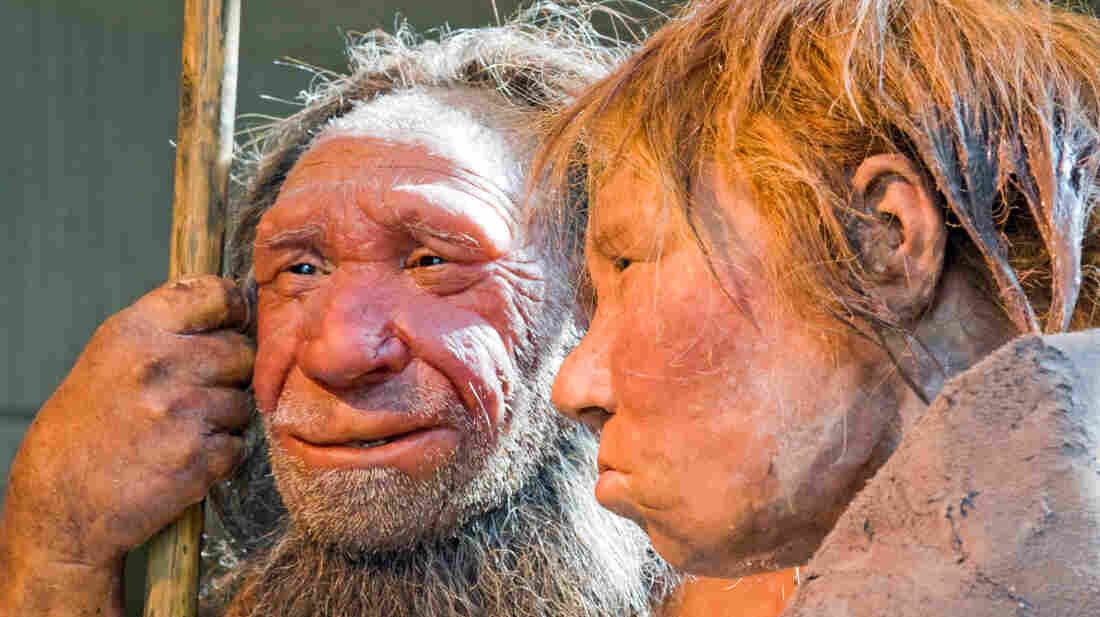 Love your hair. Artists' depictions of a Neanderthal man and woman at the Neanderthal Museum in Mettmann, Germany. Martin Meissner/AP hide caption

Neanderthals died out long ago, but their genes live on in us. Scientists studying human chromosomes say they've discovered a surprising amount of Neanderthal DNA in our genes. And these aren't just random fragments; they help shape what we look like today, including our hair and skin.

These genes crept into our DNA tens of thousands of years ago, during occasional sexual encounters between Neanderthals and human ancestors who lived in Europe at the time. They show up today in their descendants, people of European and Asian descent.

The snippets that come from Neanderthals can be identified because a few years ago, scientists were able to extract DNA from Neanderthal remains and read out their genetic blueprint.

A startling 20 percent of Neanderthal genes live on in us today, according to a report published Wednesday in Science magazine. Researchers found that out by combing through the genes of more than 600 living people.

"We previously knew that about 1 to 3 percent of non-African genomes were inherited from Neanderthal ancestors, but the key point is that my 1 percent might be different from the 1 percent Neanderthal sequence that you carry," says Josh Akey, an associate professor of genome sciences at the University of Washington and a coauthor of the study.

Some of the Neanderthal genes may have been more beneficial for our fully human ancestors than they genes they had. Those Neanderthal genes came to dominate certain human traits, including a gene related to keratin, a protein in hair and skin.

"We don't know exactly ... which trait they were influencing, but they likely have something to do with skin or hair biology," Akey says.

Africans didn't pick up those traits, since Neanderthals originated in Europe. But this crossbreeding may affect how Europeans and Asians look today.

Another research group, this one at Harvard, also has been combing through human genes looking for Neanderthal leftovers. That group's results were published Wednesday in the journal Nature and are remarkably similar to the Science study.

"My guess is there must have been a small population of Neanderthals with which modern humans would have interbred," says Sriram Sankararaman, a postdoctoral researcher on the Harvard team.

And they found very little Neanderthal DNA on the X chromosome. That suggests that Neanderthals and our human ancestors were barely compatible, and that many of their male offspring may have been sterile hybrids, like mules.

"So this suggests that the male hybrids might not have been fertile, whereas the females might have been fully fertile," says Svante Paabo, director of the department of genetics at the Max Planck Institute for Evolutionary Anthropology in Leipzig, who is a coauthor of the Nature study. "[Neanderthal genes] it might have been passed on particularly through females."

The story is still hazy, but very provocative.

"I think it's fascinating that the Neanderthals live on today, so to say, a little bit in us," Paabo says, "and not just in the form of anonymous DNA fragments that we pass on to the next generation, but also in the part of our genome that actually influences how we look, or how we behave or what diseases we have."

Reading these genes tells us more about our mysterious Neanderthal relatives. But Akey says it also can tell us a lot about ourselves.

By studying where the Neanderthal DNA is missing in our genes, Akey says, we may identify genetic passages that make humans uniquely human.