Accessibility links
Rep. Waxman Leaves Behind A Legacy Of Health Laws : Shots - Health News California Rep. Henry Waxman, elected in 1974 in Watergate's aftermath, has announced his retirement. The Democrat leaves behind one of the most substantive legislative records in the House's recent history, and was instrumental in the passage of the Affordable Care Act. 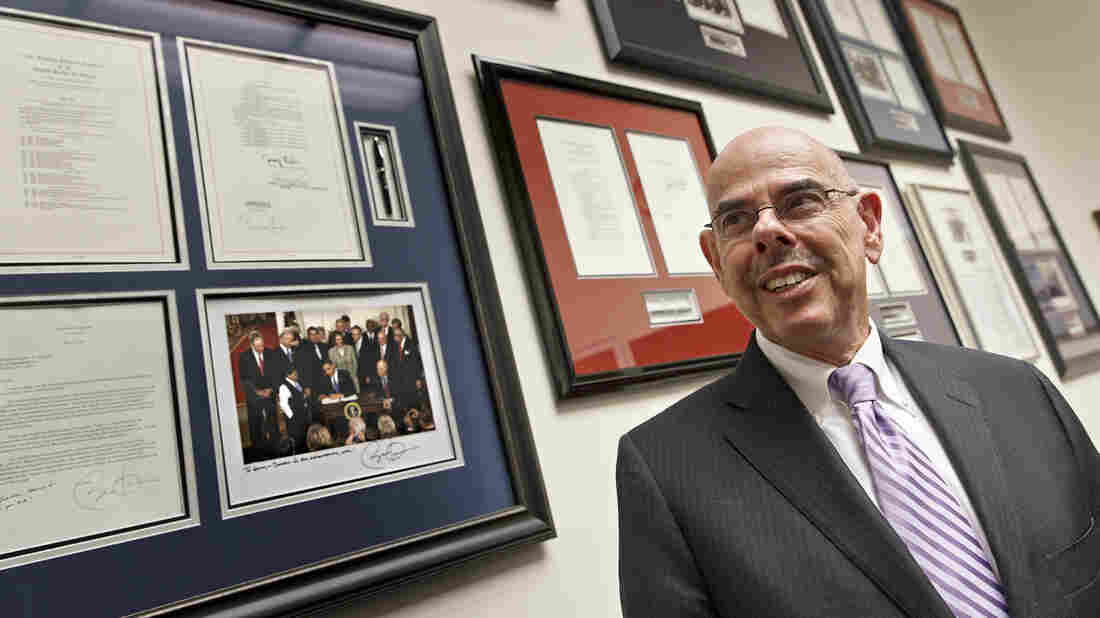 Democratic Rep. Henry Waxman of California stands in his Capitol Hill office beside a wall displaying his legislative accomplishments. Waxman, 74, said Thursday that he would retire after 40 years in the House of Representatives. J. Scott Applewhite/AP hide caption 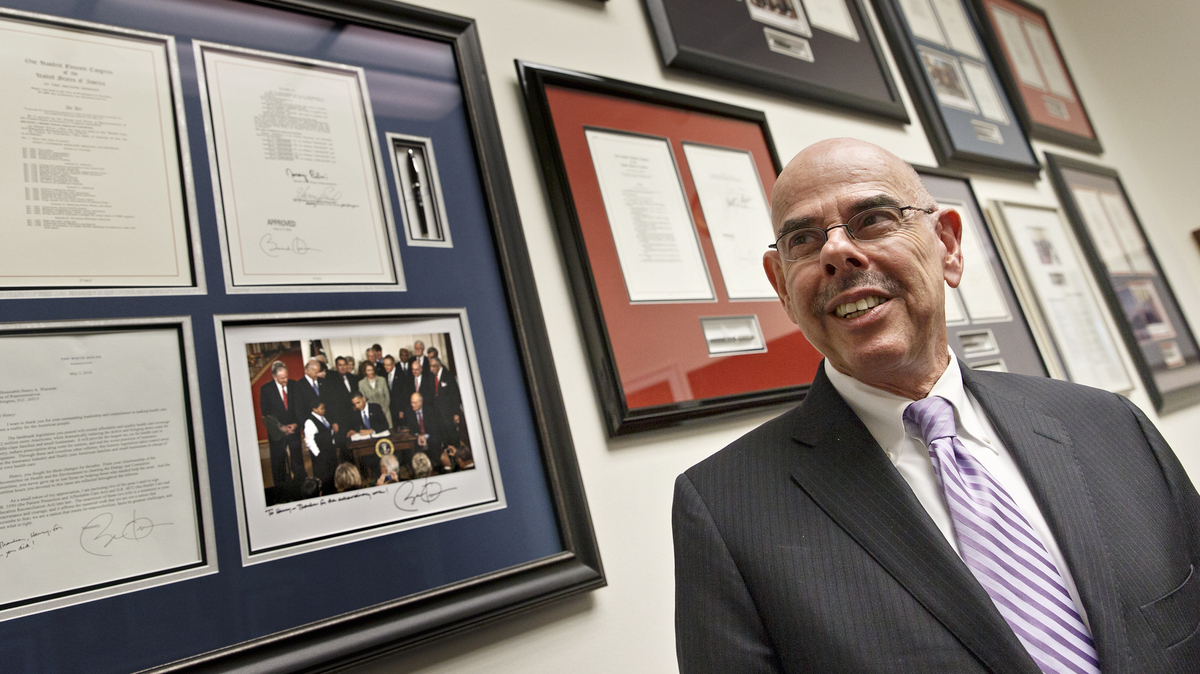 Democratic Rep. Henry Waxman of California stands in his Capitol Hill office beside a wall displaying his legislative accomplishments. Waxman, 74, said Thursday that he would retire after 40 years in the House of Representatives.

California Democratic Rep. Henry Waxman, one of the last remaining members of the huge post-Watergate class of 1974, is calling it quits at the end of this term.

Most people who live outside his Los Angeles district and off Capitol Hill have likely never heard of Waxman. He was never a fixture on the Sunday talk shows, or in Washington's social scene.

Rather, during his 40 years in the House of Representatives, Waxman focused on passing legislation — lots of legislation. On the website of the Energy and Commerce Committee — where he has served in the leadership since the 1970s — the list of laws he helped pass would be impressive for a half-dozen people. It includes health laws like the Affordable Care Act, the Ryan White AIDS law, and the Children's Health Insurance Program; consumer laws requiring nutrition labels and tobacco warning labels; and environmental laws including updates to the Clean Air Act and to the Safe Drinking Water Act.

Those who specialize in watching Congress and its workings say Waxman will ultimately be remembered alongside those who commanded much more of the spotlight.

"Waxman is really one of the Ted Kennedys of the Congress," says Thomas Mann of the Brookings Institution. "Remember, they're both liberals, but both had an uncanny ability to work with other members when [they] needed to be on both sides of the aisle to get things done."

Indeed, Waxman has never apologized for his liberalism.

"We need government," he told NPR Wednesday. "We appreciate it when there's an emergency. We need government when we want clean air and clean water and food that's not going to kill us, and drugs that will save us."

But what's made Waxman so effective over the years has been that willingness to work across the aisle. One of his frequent partners has been Sen. Orrin Hatch, a conservative Republican from Utah. The two first teamed up on major legislation in 1984, on a bill that paved the way for the sale of generic copies of prescription drugs.

He's a formidable opponent, because Henry is always prepared. ... He's one of the best liberal congresspeople I've known in my whole 37 years in the United States Senate.

What's come to be known as the Hatch-Waxman law "is on its way to saving trillions of dollars for consumers," Hatch says. "It's already saved about $1.5 trillion."

Hatch, who worked with Waxman on the Ryan White AIDS law, the Children's Health Insurance Program, and other bills, also opposed him on many issues. But he says he appreciated having Waxman as an adversary as much as an ally.

"He's a formidable opponent, because Henry is always prepared," Hatch says. "He's very, very bright; but Henry was not only bright, he was articulate. He understood the legislative process. He's one of the best liberal congresspeople I've known in my whole 37 years in the United States Senate."

"He was a teacher. He was a mentor. He encouraged me; he patiently explained complicated things to me," said Sen. Sherrod Brown, D-Ohio, who began his legislative career in Washington on the House Energy and Commerce Committee under Waxman's tutelage.

Brown says that among the things he learned from Waxman are "how you legislate, and how you work to educate the public and how you change the debate when the other party's in control."

Waxman is known as a tenacious negotiator — but also for being patient and methodical. During the 1980s, when cutting budgets was the rule, he quietly worked to expand the Medicaid program even within massive budget reduction bills.

"And he would do it year by year so that, ultimately, it truly became institutionalized," said Ron Pollack of the health advocacy group Families USA.

But Waxman says that even at a relatively young 74, he feels Congress has reached a point where he can no longer get much done.

"It's very difficult when the party that's in control is dominated by a group of extremists from the Tea Party that think along the lines of compromise [as] being a dirty word, and working with the other party, the Democrats, as complicity with the enemy," he says.

Advocates off Capitol Hill are already wondering what Congress will be like for their issues in a post-Waxman era.

"He's just a formidable foe for those people on the other side," says Pollack. "And he's really a personal archive of policy and the history of health care. So it will be an enormous loss to see Henry leave the Congress."

Others worry about the loss of Waxman's staff — long considered among the top experts in their respective fields. Former Waxman staffers have often frequently gone on to top positions in Democratic administrations; the current White House health policy coordinator, Phil Schiliro, was a longtime Waxman chief of staff.

As for Waxman himself, he says he hasn't decided what he'll do when he finishes his term. He says he loves both California and Washington, D.C., and would like to find something that will let him continue to split his time between the two, "but not have to go back and forth every week" — the way serving in Congress demands.