Accessibility links
HPV Vaccine Doesn't Promote Riskier Sexual Behavior In Teens : Shots - Health News The HPV vaccine is recommended for girls and boys when they are 11 or 12. The idea is to get preteens vaccinated so that if they do become sexually active as teens, they will be protected against a virus that can cause cervical cancer. 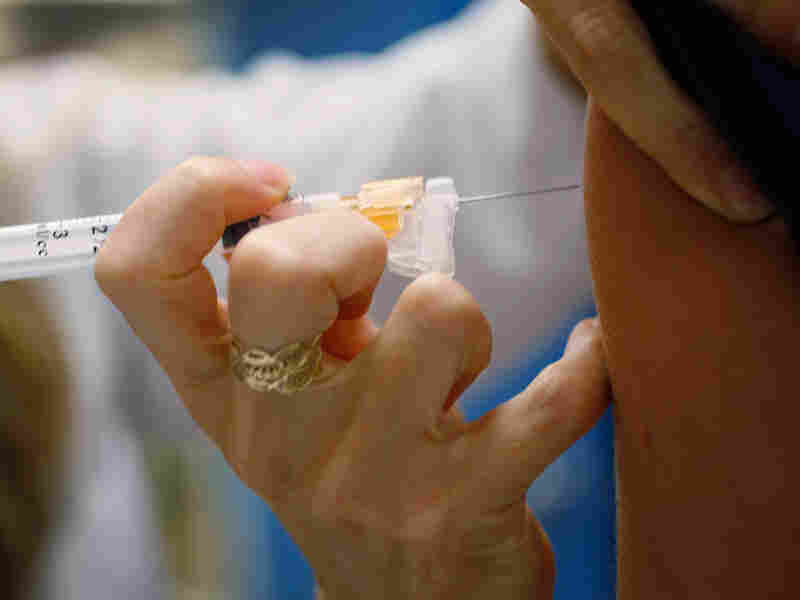 A 13-year-old girl gets an HPV vaccination at the University of Miami in 2011. The vaccine protects against the human papillomavirus, which can cause cervical cancer. Joe Raedle/Getty Images hide caption

More than a few parents have worried that the HPV vaccine might encourage girls to be more sexually active.

But girls say that's not so, even if they think, wrongly, that the HPV vaccine protects them against other sexually transmitted diseases.

Earlier studies have found that the vaccine for human papillomavirus, which is sexually transmitted and can cause cervical cancer, doesn't encourage increased sexual activity in teenagers and young women.

The HPV vaccine is recommended for girls and boys when they are 11 or 12. The idea is to get preteens vaccinated so that if they do become sexually active as teens, they will be protected against HPV.

In this study, researchers asked 339 teenagers and young women ages 13 to 21 about their knowledge about HPV vaccine, what they knew about the risks of other sexually transmitted diseases, and whether they thought they needed to adopt safe sexual behaviors after getting the HPV vaccine.

An earlier study had found that when teenage girls got the HPV vaccine, about 24 percent of them thought erroneously that they also gained protection against other STDs.

This study asked girls and young women the same questions two and six months after their first HPV vaccine shot. It found that there was no association between their perception of risks and sexual activity. That was true whether they were sexually experienced or not. The results were published Monday in the journal Pediatrics.

The participants who were sexually active didn't stop using condoms or otherwise protecting themselves against STDs.

And in girls ages 16 to 21, those who wrongly thought that the HPV vaccine could protect them against other STDs were actually less likely to become sexually active after getting the vaccine.

The researchers don't know why that may be. They speculate that girls who appear to be unlikely to be sexually active may get less education about HPV vaccines from parents and doctors. Or it could be that girls who are not contemplating sex are just not interested in the issue of STDs.

The reasons that teenagers decide to have sex are complex, the scientists note. But surveys like this may help parents realize that the HPV vaccine probably doesn't play much of a role in those decisions.