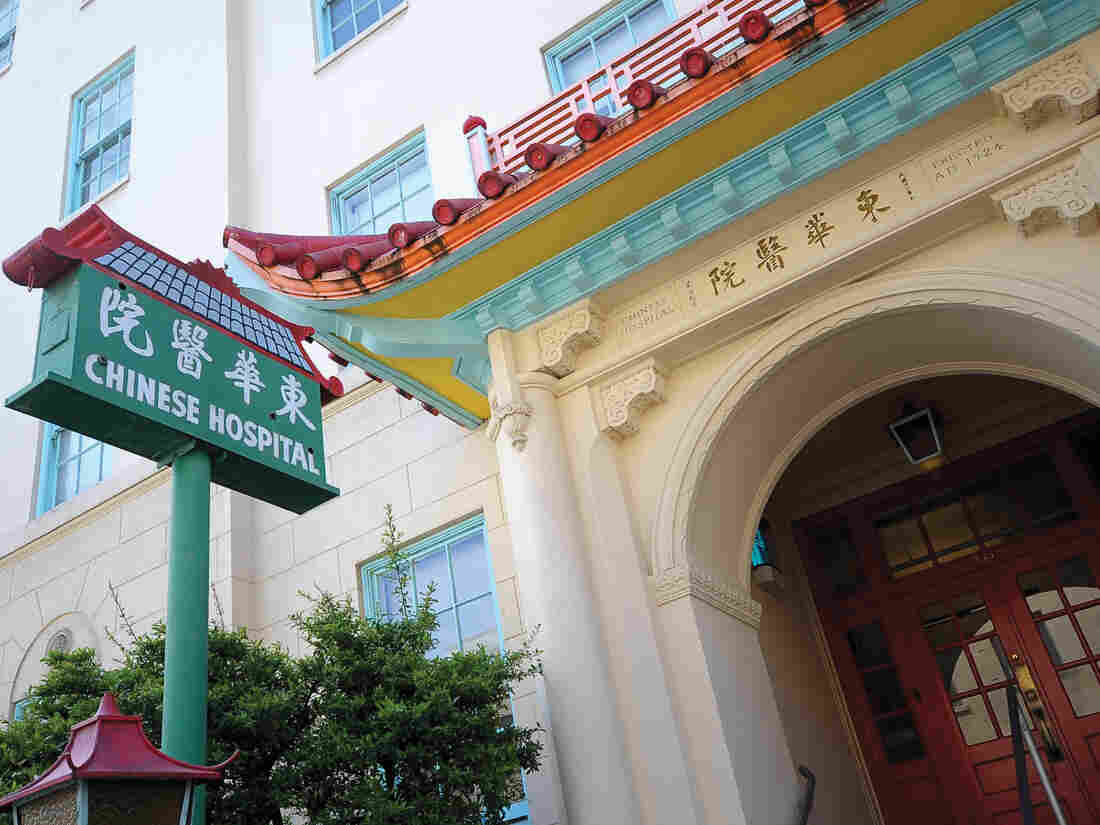 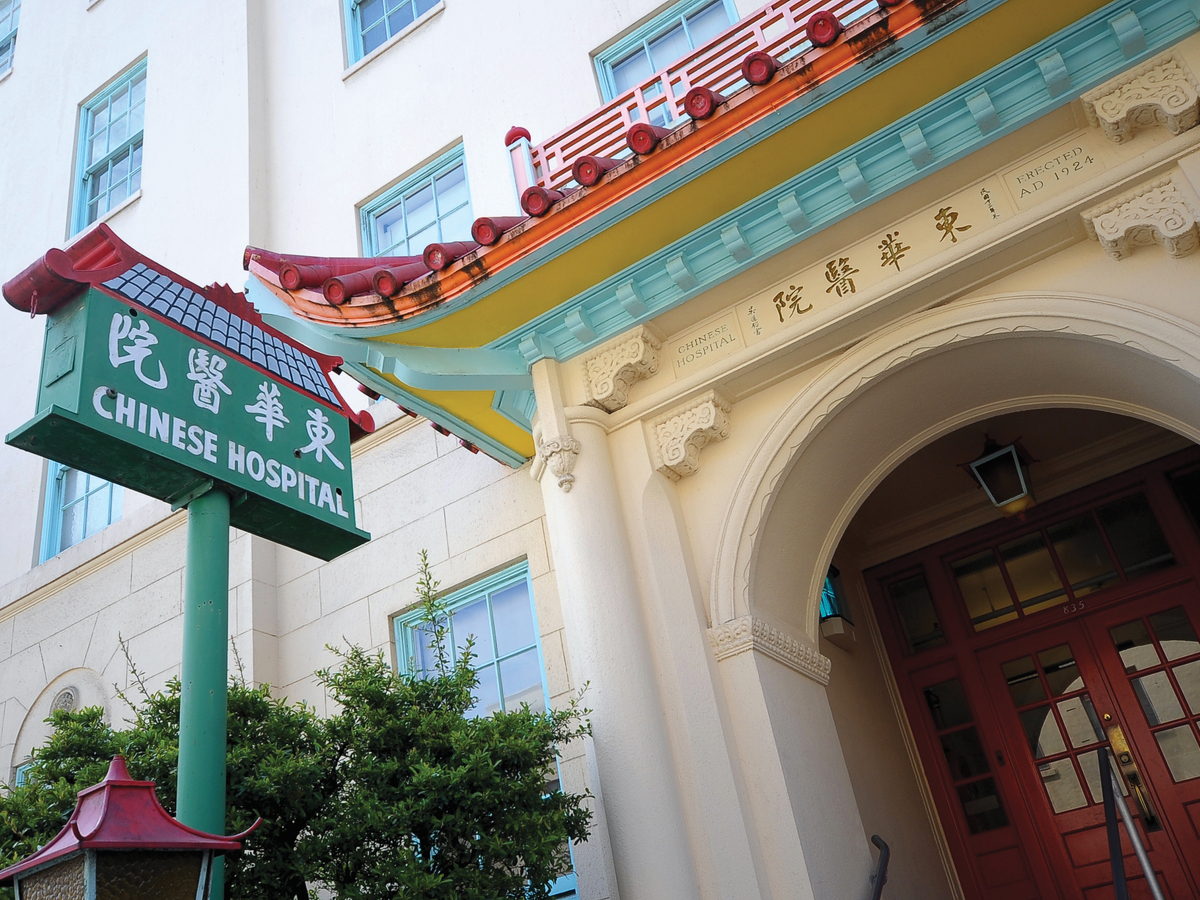 San Francisco's Chinatown is a city within a city.

Built by immigrants in the latter half of the 19th century, Chinatown was a refuge from the era's vicious prejudice. But the crowded blocks of Chinatown were also a kind of prison.

Chinese residents feared leaving the area after dark, and they were barred from local schools and the city's hospitals — even during an outbreak of bubonic plague in San Francisco. It was painfully clear that when it came to medical care, they had to provide for themselves.

"Chinese Hospital Association really formed back in 1899, back in the days when really a lot of the residents in Chinatown didn't have access to modern health care," says Larry Loo, the director of business development and operations for Chinese Community Health Plan.

On a recent winter day, Loo dashes through a maze of alleyways to Chinese Hospital. In its early days, the hospital was called the Tung Wah Dispensary, and it was the only facility offering Western medicine inside Chinatown's gates. The dispensary was destroyed in the 1906 earthquake and rebuilt in 1925.

Even after Chinese-Americans and other Asian immigrants were welcomed elsewhere in San Francisco, loyalty for the hospital endured. Even Bruce Lee was born there.

The Chinese Community Health Plan is tiny by industry standards, with just 15,000 members. It has long sold health coverage to Medicare beneficiaries and local businesses, but it is finding success with a new group of customers: young, uninsured Chinese immigrants who work in the city's restaurants, laundries and produce shops.

At a nearby insurance enrollment center in Chinatown, there is a steady line of people waiting to buy coverage. Erika Zhou, 20, sits across a desk from Sam Ho, who is an enrollment specialist for people shopping on the state's insurance exchange.

Zhou emigrated from China to the U.S. a year and a half ago, received her green card, and has since found a steady job as a waitress. Her job doesn't come with health insurance, and like many people in Chinatown's tightknit community, Khou is keenly aware that she could face federal tax penalties for failure to have medical coverage.

Ho shows Zhou her coverage options on a computer screen: HealthNet, Anthem Blue Cross, Kaiser Permanente. The Chinese Community Health Plan appears in Chinese characters. Zhou earns too much to qualify for a subsidy, and she picks the Chinese plan since it's the lowest price, by far, and she doesn't expect to use it much.

"I didn't go anywhere to see doctor," Zhou says. "I didn't get sick for whole year."

Although Zhou is beginning to learn English, she says she wants to speak to her doctors in Cantonese if she were to get sick.

Language access is critical to Chinese-Americans. Among the many immigrant groups in the U.S., they are among the least likely to speak English. Although Asian Americans make up 5.6 percent of the U.S. population, in San Francisco, 1 in 3 residents is Asian, and the vast majority of them are Chinese.

That could explain Chinese Community Health Plan's remarkable success selling policies on California's competitive insurance market. The company has surpassed its sign-up goal for the entire year before the end of January. Irene Louie, director of member services, says the walk-in center off a bustling street in Chinatown caters to Chinese sensibilities.

"We like to talk to people in person," Louie says. "Face-to-face. Just get it over with it. Have the question and resolved right away."

There are other cultural distinctions: When customers do call in, it's considered impolite to ask their first name or other personal details at the beginning of a conversation. And don't expect sterling customer reviews. Even though the service — and the hospital's famed rice porridge — might be excellent, Louie says Chinese-Americans are tough customers.

"We tell them 1 to 10 how do you like the service? They will say, I will give you a 7. And then we ask, Why can you give us higher score than 7? They say, Oh, no, no, no. I think 7 is very good. They are afraid if I give you the highest score then you won't make any improvement," Louie says.

Any bitterness among Chinese-Americans over the years of exclusion from San Francisco's hospitals has long since subsided, says the health plan's Larry Loo. In fact, he hopes to attract non-Chinese customers to the health plan. "Even though the delivery system has a strong mission to ensure Chinese community is taken care of, it's still here to serve everyone else."

Still, Chinatown is investing in its own once again. A new, more modern Chinese Hospital is under construction.