Accessibility links
With This Year's Flu, Young Adults Are Not So Invincible : Shots - Health News Young people are usually less likely to become seriously ill with flu, but this season looks like an exception to that rule. Blame the H1N1 strain. Even though the flu vaccine is less than perfect, getting a shot each year can make the illness less severe, doctors say. 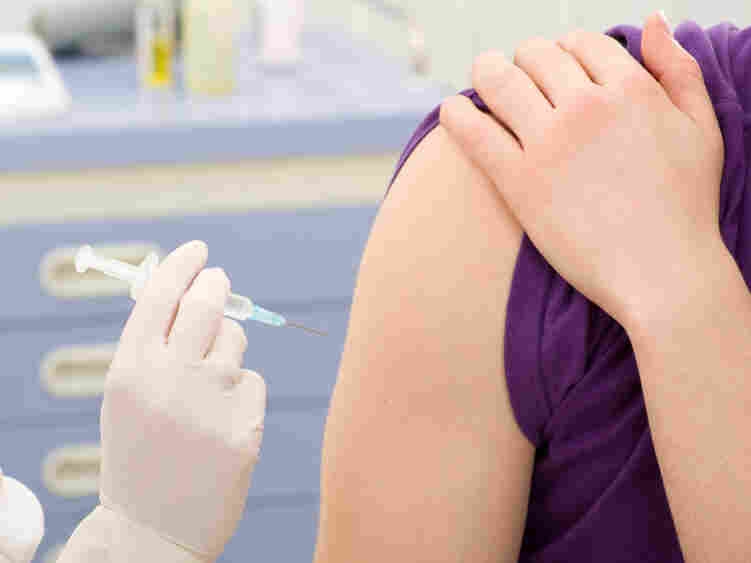 A flu shot would have helped protect young adults, but most didn't get it. iStockphoto hide caption

We usually think of the flu as an illness that afflicts the elderly. But this season the virus seems to be hitting younger people hard.

This winter at Duke University Medical Center in Durham, N.C., the median age of people hospitalized with influenza was 28.5 years. Many of the worst cases of flu occurred in young, otherwise healthy people.

"There's nothing that's been personally more dreadful to me as a young guy with a kid at home than to walk into our ICU and see pregnant women or young, otherwise healthy people struggling not to die on a ventilator," says Dr. Cameron Wolfe, an assistant professor of infectious disease at Duke.

Wolfe and his colleagues found that out of the 55 flu cases the hospital has seen so far, 87 percent were infected with H1N1, the same strain responsible for the global pandemic in 2009. They reported their findings in a small preliminary study in the American Journal of Respiratory and Critical Care Medicine.

The takeaway message, Wolfe tells Shots, is that even the young and healthy should get flu shots.

"Very young teenagers and college-age kids tend to think they're immortal," Wolf says. "And I think there's a general misunderstanding of the role of vaccines."

Many people don't realize that the vaccine can take up to two weeks to kick in, Wolfe says, and then when they get sick they assume that the vaccine isn't effective. Others avoid it because in some people, side effects of the vaccine resemble flu symptoms.

The flu vaccine in particular is misunderstood, Wolfe says, "because at the end of the day it's not a perfect vaccine." Even those who have gotten the shot can fall ill, especially if they contract a strain that's not covered by the annual vaccine.

But the vaccine protects against several strains, and it encourages our bodies to create antibodies that can also protect against viruses that aren't the flu, according to the National Institutes of Health.

"What that hints at is maybe the vaccine has a protective effect," Wolfe says. "Even if you're going to be one of the people who do get the flu, if you get a vaccine it's going to be less severe."

Of course, this study was just a first look at flu trends in one hospital. We are only halfway through flu season, and the Centers for Disease Control and Prevention won't be putting together a picture of the national trends until this summer.

But Dr. Michael Jhung, an infectious diseases officer at the CDC, says a lot of what the Duke researchers found sounds similar to national trends he's been observing.

He says the predominance of the H1N1 strain might be responsible for the uptick in young adults suffering from the flu. Since a similar strain was circulating in the 1940s, Jhung tells Shots, many older people have developed immunity to H1N1.

"Last year, which was a year when we saw H3N2 predominate, was particularly bad for the elderly," he says.

But there's another possible reason, he says: "Young and middle-aged adults are among the lowest vaccinated age groups in the U.S."

Last year, only 26 percent of 18- to 49-year-olds got flu shots. The CDC estimates that this flu season will be a bit better, with around 31 percent getting the vaccine.

"Often [young people] can't imagine that the flu could cause a severe illness in them," Jhung says. But he says he's not sure what will push people in this age group to actually get vaccinated.

Younger adults are also not good at getting other recommended shots. A 2007 CDC survey found that only 57 percent of 18- to 49-year-olds had gotten the tetanus booster shot in the past 10 years. That's pretty low considering that one quick shot every 10 years could prevent people from getting this serious infection, which is caused by bacteria in the environment that get into the body through cuts or puncture wounds and is fatal 10 percent of the time.

"I suspect that numbers and surveillance data and national estimates aren't going to be very compelling for most people," Jhung says. "It may unfortunately take a personal encounter with influenza to convince people."