Accessibility links
Stopping Microbes Not Missiles: U.S. Plans For Next Global Threat : Shots - Health News The world is at greater risk than ever from pandemics and biological weapons, health officials said Thursday. In response, the U.S. government is spearheading a global effort to build an early warning system for infectious diseases, drug-resistant microbes and possible bioterror agents. 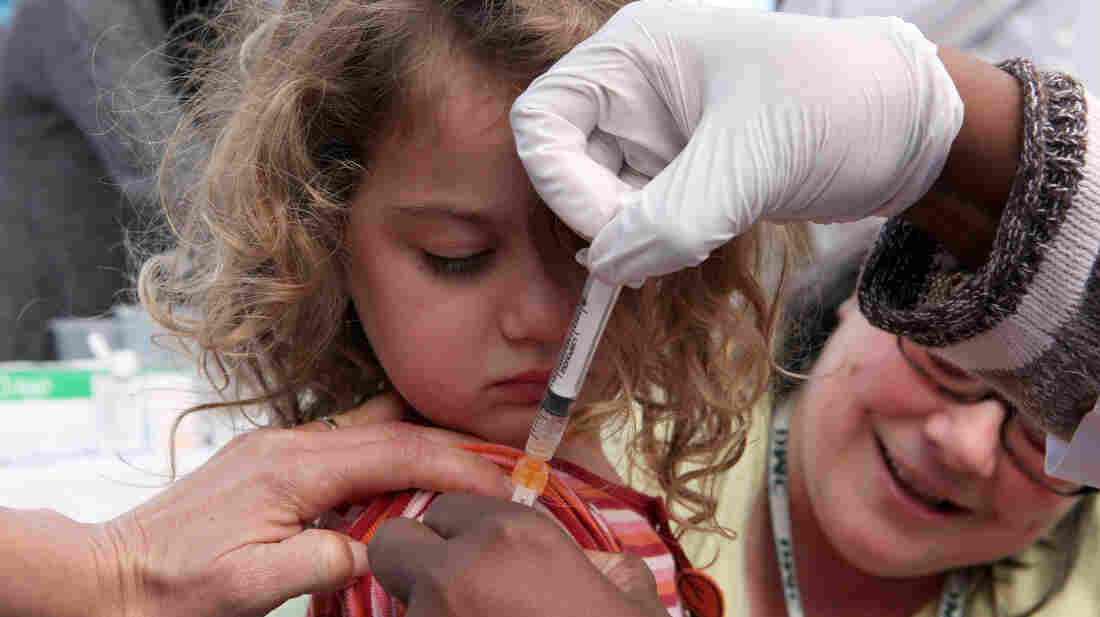 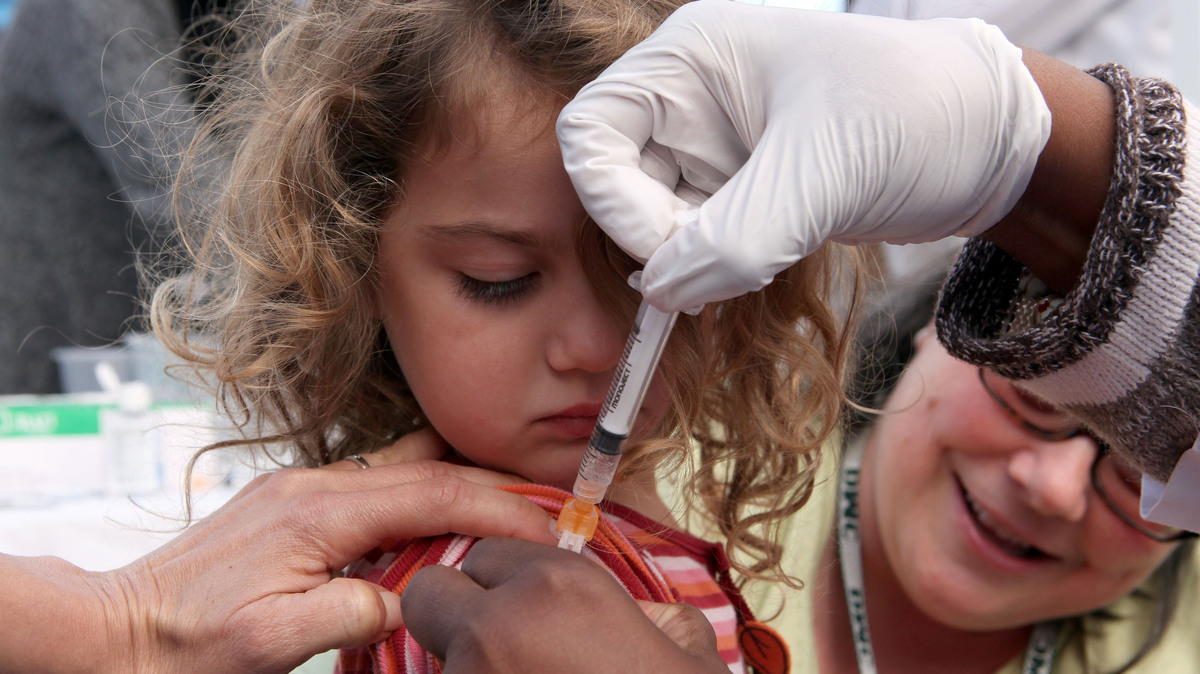 Hannah Rood, 3, receives an H1N1 vaccine at a clinic in San Pablo, California, during the 2009 swine flu epidemic.

Spot the next plague before it arrives. Predict the next swine flu outbreak before it makes headlines. Even detect a biological weapon before it's launched.

These are the goals of an ambitious initiative, launched Thursday, to build a worldwide surveillance system for infectious diseases.

Spearheaded by the U.S. government, the Global Health Security Agenda brings together 26 countries, the World Health Organization and several other international group. It aims to stop epidemics and bioterror agents before they spread.

Why is such an early warning system needed?

Because the U.S. and the world are at greater risk than ever before from biological organisms, says Dr. Tom Frieden, the director of the Centers for Disease and Control Prevention.

"Viruses are just a plane ride away," he says. Bird flu could spread out of Asia. Ebola could emerge out of central Africa. Or drug-resistant Staphylococcus can sweep through hospital wards. "In today's globalized world, an outbreak anywhere is a threat everywhere," Frieden says.

The Global Health Security Agenda is an attempt to make the world better prepared to confront those threats, he says. "We want to make sure we do everything we can to prevent emerging organisms from becoming outbreaks and outbreaks from becoming epidemics."

And the Obama administration seems to agree. It has placed several high-ranking officials on the project, not just from the medical side of the government, but also from the U.S. military and the Department of Homeland Security.

Three top officials wrote an opinion piece Thursday on CNN's website to make the case that biosecurity is a key element of national security.

In the piece, Secretary of State John Kerry; Secretary of Health and Human Services Kathleen Sebelius; and Obama's assistant on homeland security and counterterrorism, Lisa Monaco, argued that infectious diseases have the potential to cause massive economic damage and loss of life, similar to nuclear, chemical or cybersecurity attacks.

They offered two examples to illustrate their point: the economic loss from the H1N1 swine flu in Mexico in 2009 and lives lost from the SARS epidemic in Asia in 2002 and 2003.

The Obama administration has been concerned that many countries don't have the capacity to monitor potential biohazards and emerging diseases, said Laura Holgate, the senior director for weapons of mass destruction, terrorism and threat reduction at the National Security Council.

"In 2012 we were really struck by the reality that 80 percent of the countries didn't meet the WHO deadline to be prepared for disease threats," Holgate said Thursday at a media briefing. In a world where viruses and other biological agents don't respect national borders, she said, the U.S. can't do this alone.

The Global Health Security Agenda plans to build a structure for biosurveillance so that, hopefully, other countries will be able to quickly detect the next major epidemic. The program also will set standards for national laboratories and outline the diagnostic tools needed to spot and contain modern diseases.

The participating countries have committed to creating emergency disease centers that can respond within two hours to an outbreak or other crisis. They also have agreed to link data from this global biosurveillance network through the WHO.

It's unclear how much the Global Health Security Agenda will cost the U.S. Other countries, such as China, are spending their own money on the parts they're implementing themselves.

But the Obama administration did say it's committing an extra $45 million to the CDC's 2015 budget to help low-income countries participate in the network. The money will mainly go to improve surveillance systems, update diagnostic equipment and train staff.