Accessibility links
Babies Who Eat Too Well May Be On The Path To Obesity : Shots - Health News Do pushy parents make a baby fatter, or is it all in the genes? That's one of the big puzzles that scientists are trying to answer. Two studies suggest that an individual's interest in food is a big factor, even in babies. A genetic predisposition may be involved. 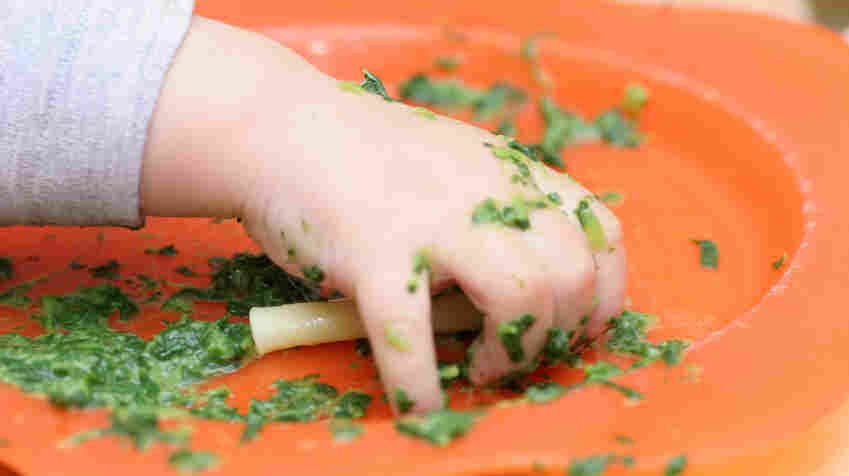 It's great that he's going for the last piece of pasta. Or is it? iStockphoto hide caption 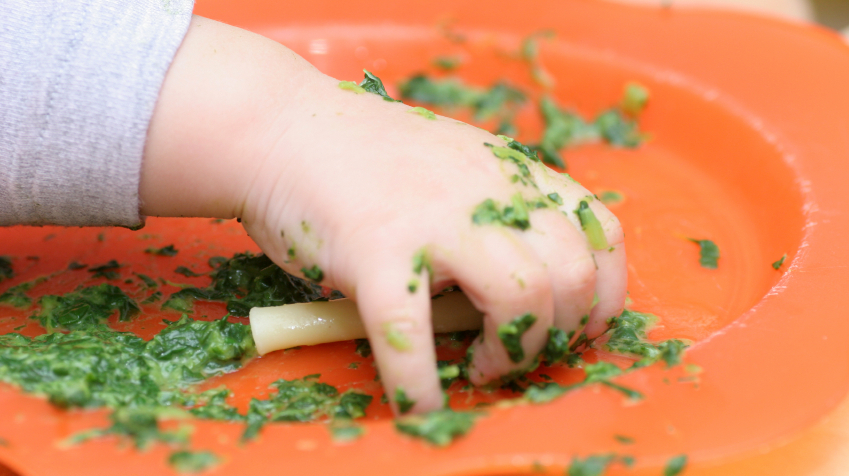 It's great that he's going for the last piece of pasta. Or is it?

Parents love it when their babies are good eaters, whether it's polishing off a bottle or happily grabbing bits of pasta. But researchers think babies who chow down with gusto might be setting themselves up for obesity later on.

By looking at pairs of twins, researchers were able to separate a baby's eating habits from parental influences. In this study, twins who were enthusiastic about food and took longer to get full had by 15 months gained 2 pounds more than a less enthusiastic sibling. Considering that the babies' mean weight at that age was 22 pounds, it's a pretty big difference.

The researchers, at University College and King's College in London, looked at twins so they could figure out how much of the weight difference was due to the children's behavior, instead of differences in how parents feed them. They studied only fraternal same-sex twins to make the comparison clearer.

Parents were asked to report on their babies' appetites at 3 months, when they were still fed milk. They asked how enthusiastic the babies were about food, and how long it took for them to become full.

Of the 1,600 twin pairs in the study, 228 had one sibling who responded more enthusiastically to food at 3 months, or who ate for longer. At that age, the heartier eater already weighed a bit more than his or her sibling. And that trend accelerated over the next year. The results were published online in JAMA Pediatrics.

At this point you may be thinking, well, of course the heartier eater is going to weigh more. But the forces controlling appetite and eating are complex.

Adult Obesity May Have Origins Way Back In Kindergarten

With small children, parents' attitudes about food have a huge influence. The structure of this study makes it clear that even when children are at a tender age, their food preferences can affect their weight, long before they can say "more."

And since fraternal twins share half of their genes, it makes it less likely that their weight differences were due solely to genetic factors. Scientists are looking hard for the genetic roots of obesity, in the hope that people who are genetically predisposed to gain weight can be identified and helped early on.

"The obesogenic environment does not affect all children equally," Daniel Belsky, who studies the genetics of obesity at Duke University, writes in an accompanying editorial. Since children don't get as much exercise as in generations past and they're surrounded by calorie-dense foods, knowing which children are more at risk of gaining weight could make it possible to give them help early on, Belsky says.

A second study in this issue of JAMA Pediatrics found that children who shared genetic markers associated with obesity were less likely to fill up quickly and stop eating. The scientists call this "low satiety responsiveness."

But this doesn't mean that we're anywhere near having a genetic test for obesity. Genetic influences on weight remain an "enduring puzzle," Belsky points out, if not exactly a mystery.

The focus in both studies is on babies who gain weight more quickly, but these results could have implications for the less enthusiastic eaters, too. Someone who's less interested in food as a baby may not have to be careful about weight gain, where parents of a child who has always loved to chow down may need to be more vigilant about food choices.

A study published earlier this year found that children who are heavier as early as kindergarten are more likely to be obese by middle school. Previous studies have found that more babies are topping out the weight charts.

Parent who have a hearty eater in infancy may want to be aware that that could make them more susceptible to being overweight or obese later on, the British researchers say. But this study didn't follow the children beyond 15 months of age, so there's no clear cause and effect.