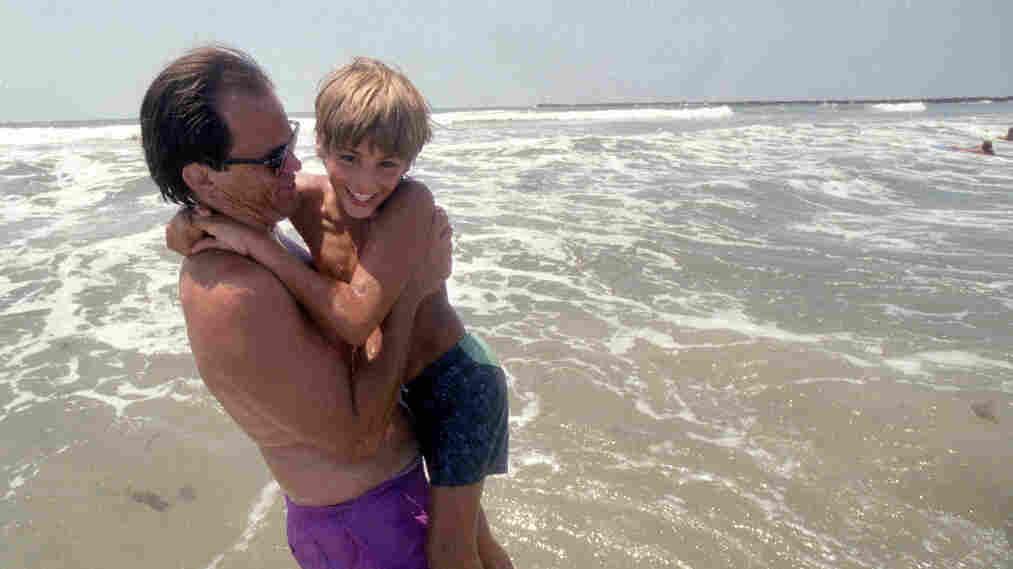 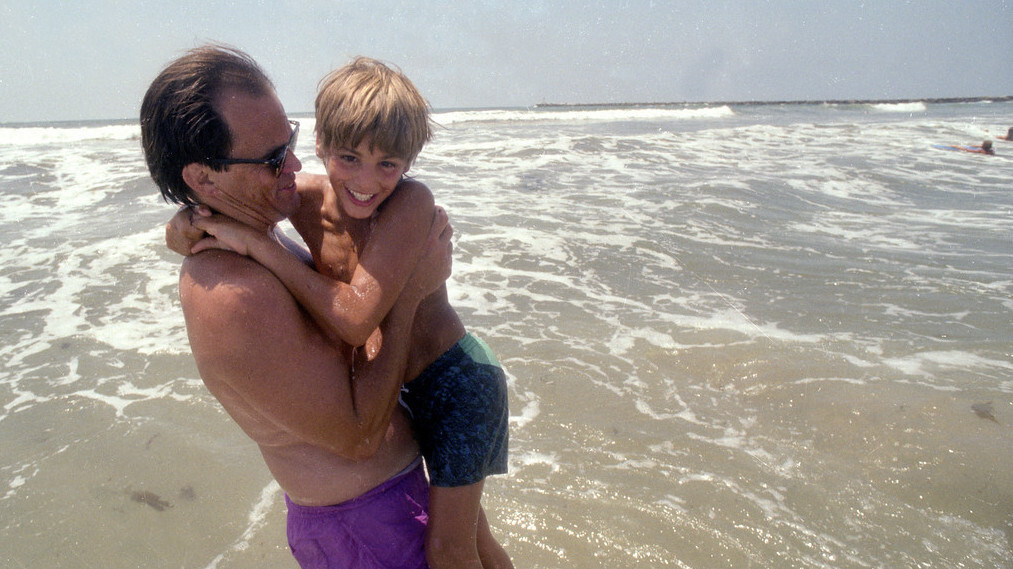 Izidor Ruckel, shown here at age 11 with his adoptive father Danny Ruckel in San Diego, Calif., says he found it hard to respond to his adoptive parents' love.

Parents do a lot more than make sure a child has food and shelter, researchers say. They play a critical role in brain development.

More than a decade of research on children raised in institutions shows that "neglect is awful for the brain," says Charles Nelson, a professor of pediatrics at Harvard Medical School and Boston Children's Hospital. Without someone who is a reliable source of attention, affection and stimulation, he says, "the wiring of the brain goes awry." The result can be long-term mental and emotional problems.

A lot of what scientists know about parental bonding and the brain comes from studies of children who spent time in Romanian orphanages during the 1980s and 1990s. Children like Izidor Ruckel, who wrote a book about his experiences. 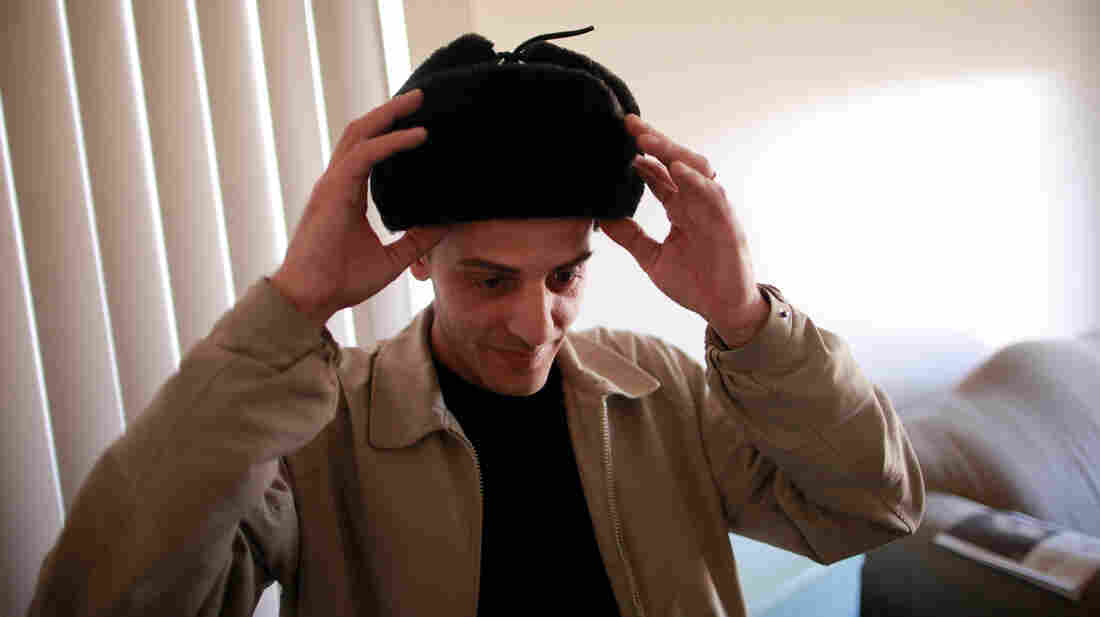 Izidor Ruckel dons a hat of a style common in his birthplace, Romania. He now lives in Denver. Barry Gutierrez for NPR hide caption 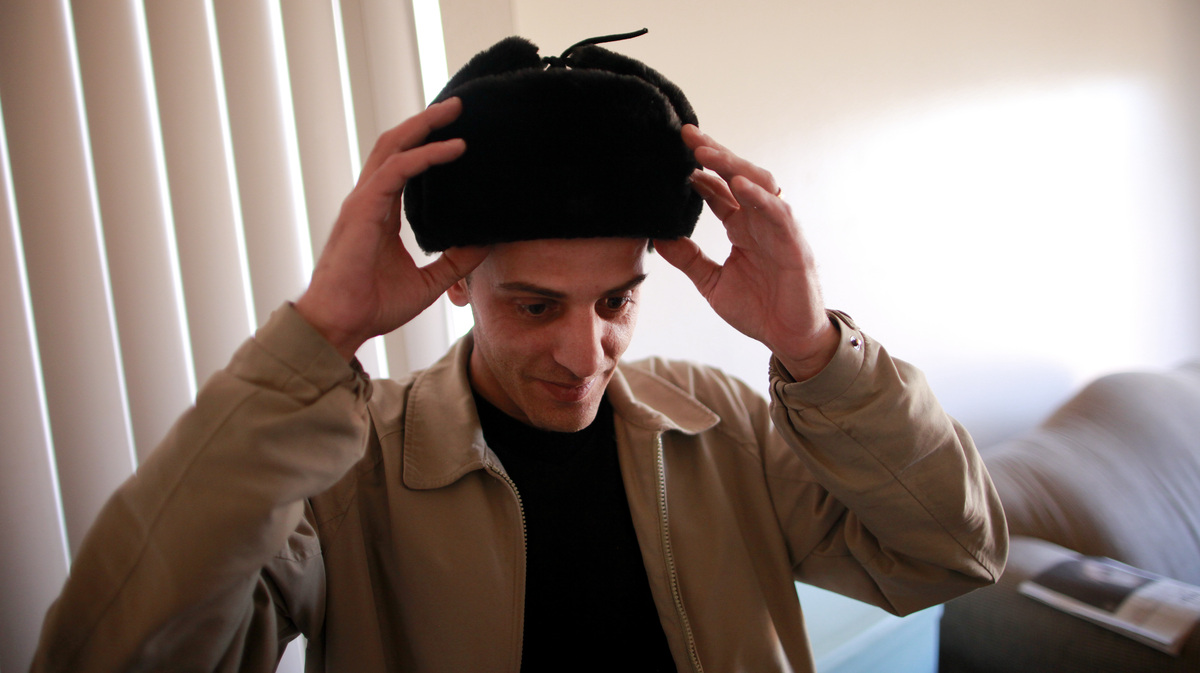 Izidor Ruckel dons a hat of a style common in his birthplace, Romania. He now lives in Denver.

When Ruckel was 6 months old, he got polio. His parents left him at a hospital and never returned. When he turned three, he was sent to an orphanage for "irrecoverable" children.

But Ruckel was luckier than many Romanian orphans. A worker at the orphanage "cared for me as if she was my mother," he says. "She was probably the most loving, the most kindest person I had ever met."

Then, when Ruckel was 5 or 6, his surrogate mother was electrocuted trying to heat bath water for the children in her care. Ruckel was on his own in a place where beatings, neglect and boredom were the norm.

Polio had left him with a weak leg. But as he got older he found he had power over many of the other children who had more serious disabilities.

"There was no right, there was no wrong in the orphanage," Ruckel says. "You didn't know the difference because you were never taught. I was put in charge of kids and I treated them just the way they treated us. If you didn't listen to me, I'd beat you." 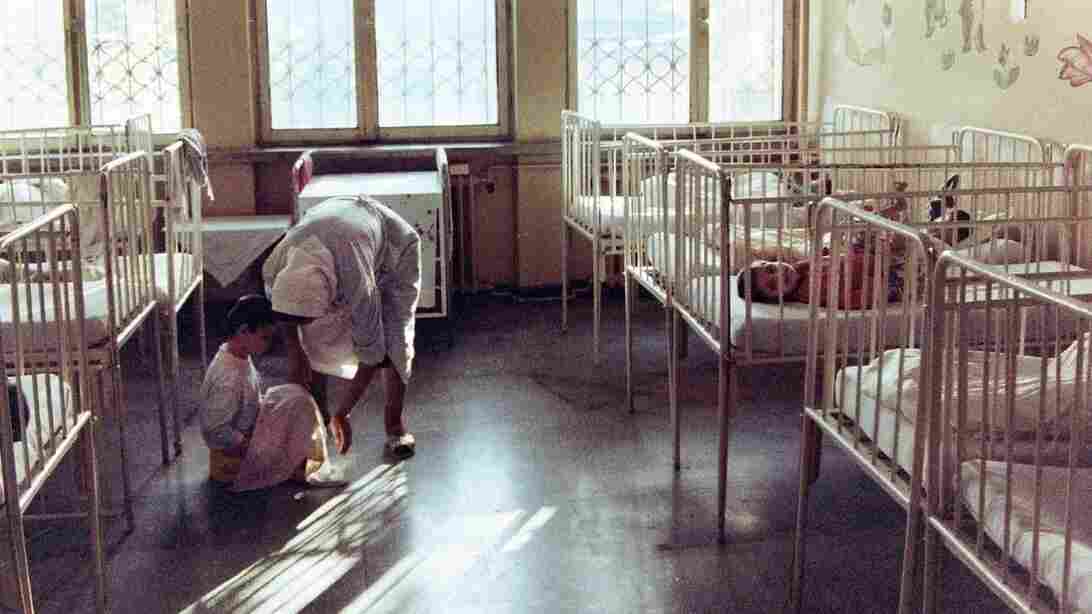 In the Institute for the Unsalvageable in Sighetu Marmatiei, Romania, shown here in 1992, children were left in cribs for days on end. Tom Szalay hide caption 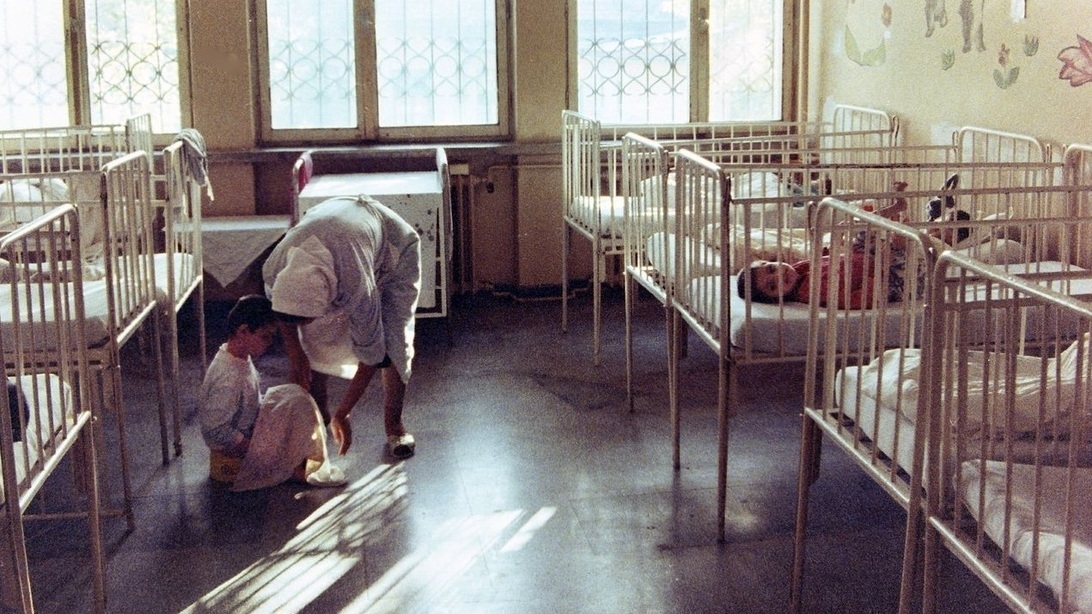 In the Institute for the Unsalvageable in Sighetu Marmatiei, Romania, shown here in 1992, children were left in cribs for days on end.

Researchers began studying the children in Romanian orphanages after the nation's brutal and repressive government was overthrown in 1989. At the time, there were more than 100,000 children in government institutions. And it soon became clear that many of them had stunted growth and a range of mental and emotional problems.

When Nelson first visited the orphanages in 1999, he saw children in cribs rocking back and forth as if they had autism. He also saw toddlers desperate for attention.

"They'd reach their arms out as though they're saying to you, 'Please pick me up,' " Nelson says. "So you'd pick them up and they'd hug you. But then they'd push you away and they'd want to get down. And then the minute they got down they'd want to be picked up again. It's a very disorganized way of interacting with somebody."

The odd behaviors, delayed language and a range of other symptoms suggested problems with brain development, Nelson says. So he and other researchers began studying the children using a technology known as electroencephalography (EEG), which measures electrical activity in the brain.

As the children grew older, the researchers were able to use MRI to study the anatomy of their brains. And once again, the results were troubling. "We found a dramatic reduction in what's referred to as gray matter and in white matter," Nelson says. "In other words, their brains were actually physically smaller."

The scientists realized the cause wasn't anything as simple as malnutrition. It was a different kind of deprivation — the lack of a parent, or someone who acted like a parent. 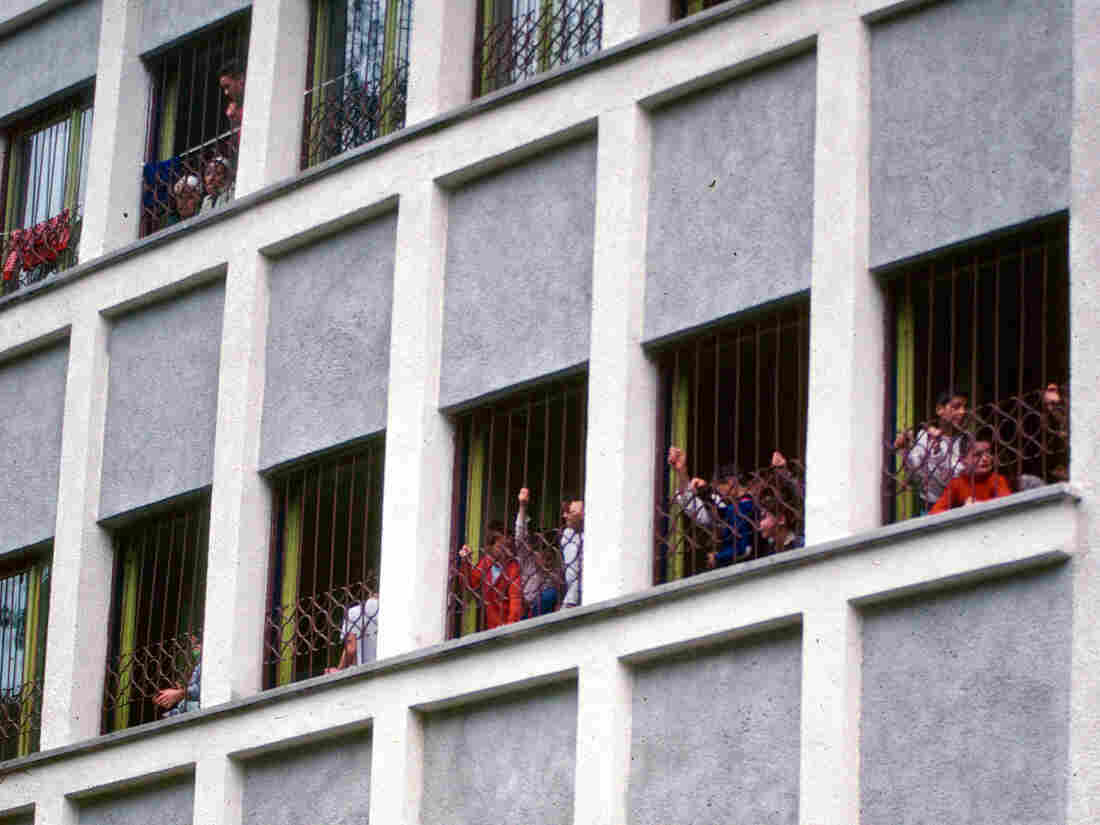 Children reach out from the windows of the orphanage in Sighetu Marmatiei in 1992. Tom Szalay hide caption 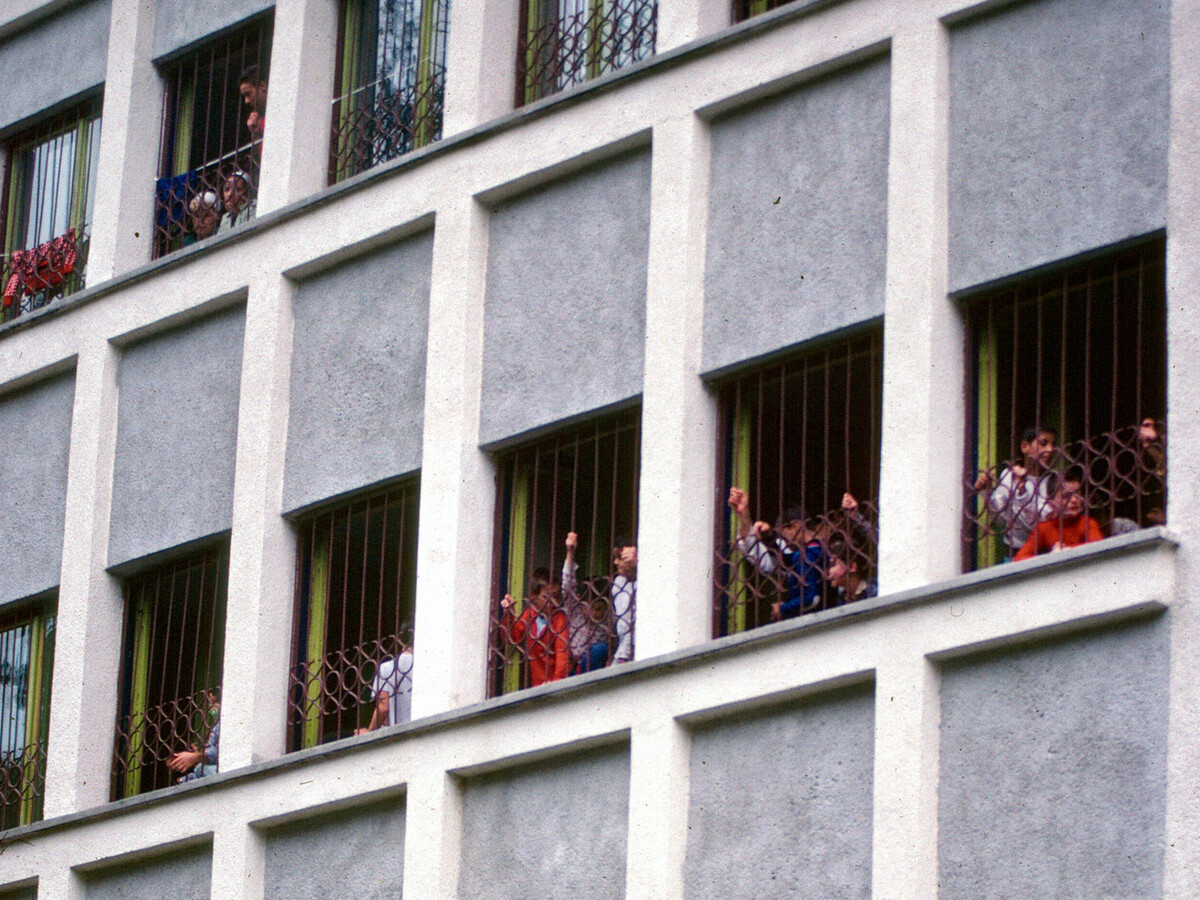 Children reach out from the windows of the orphanage in Sighetu Marmatiei in 1992.

A baby "comes into the world expecting someone to take care of them and invest in them," Nelson says. "And then they form this bond or this relationship with this caregiver." But for many Romanian orphans, there wasn't even a person to take them out of the crib.

"Now what happens is that you're staring at a white ceiling, or no one is talking to you, or no one is soothing you when you get upset," Nelson says. So areas of the brain involved in vision and language and emotion don't get wired correctly.

Izidor Ruckel says he suspects the wiring in his brain was changed by his time in the orphanage. And that may have contributed to his troubles after leaving the institution.

In 1991, when he was 11, Ruckel was adopted by an American family and moved to San Diego. At first things went pretty well, he says. Then he began to have a lot of conflict with his adoptive parents. Ruckel says it wasn't their fault. 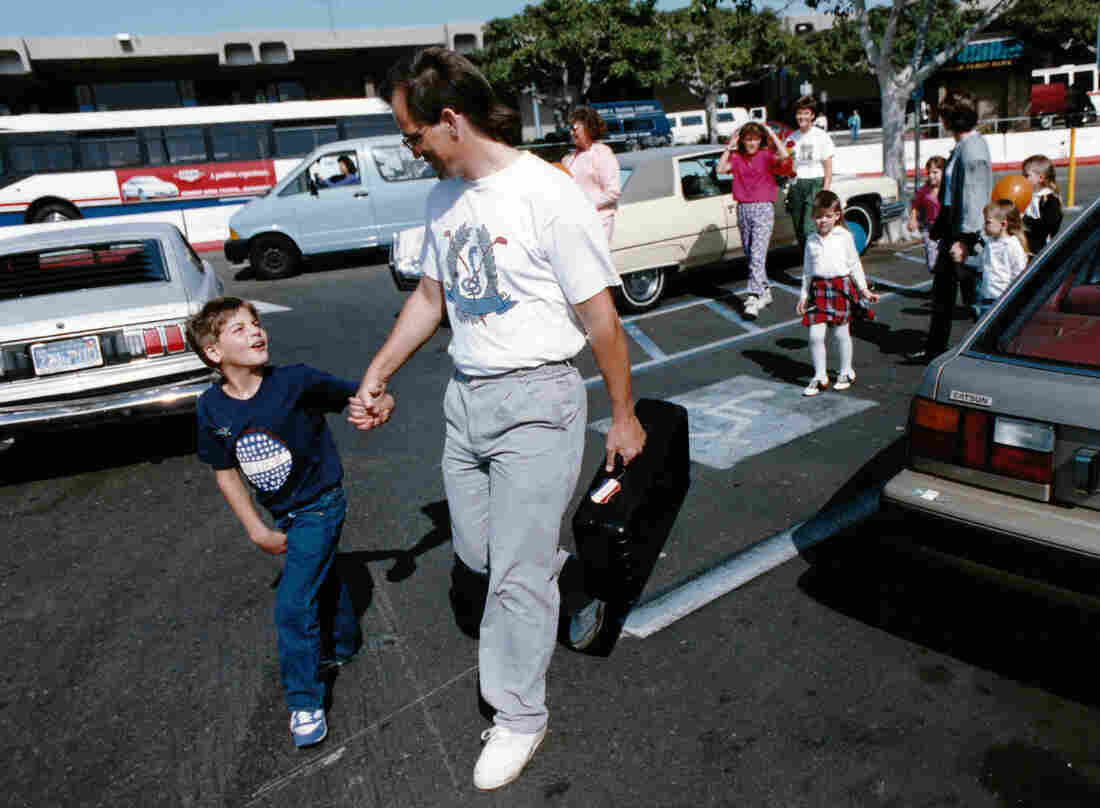 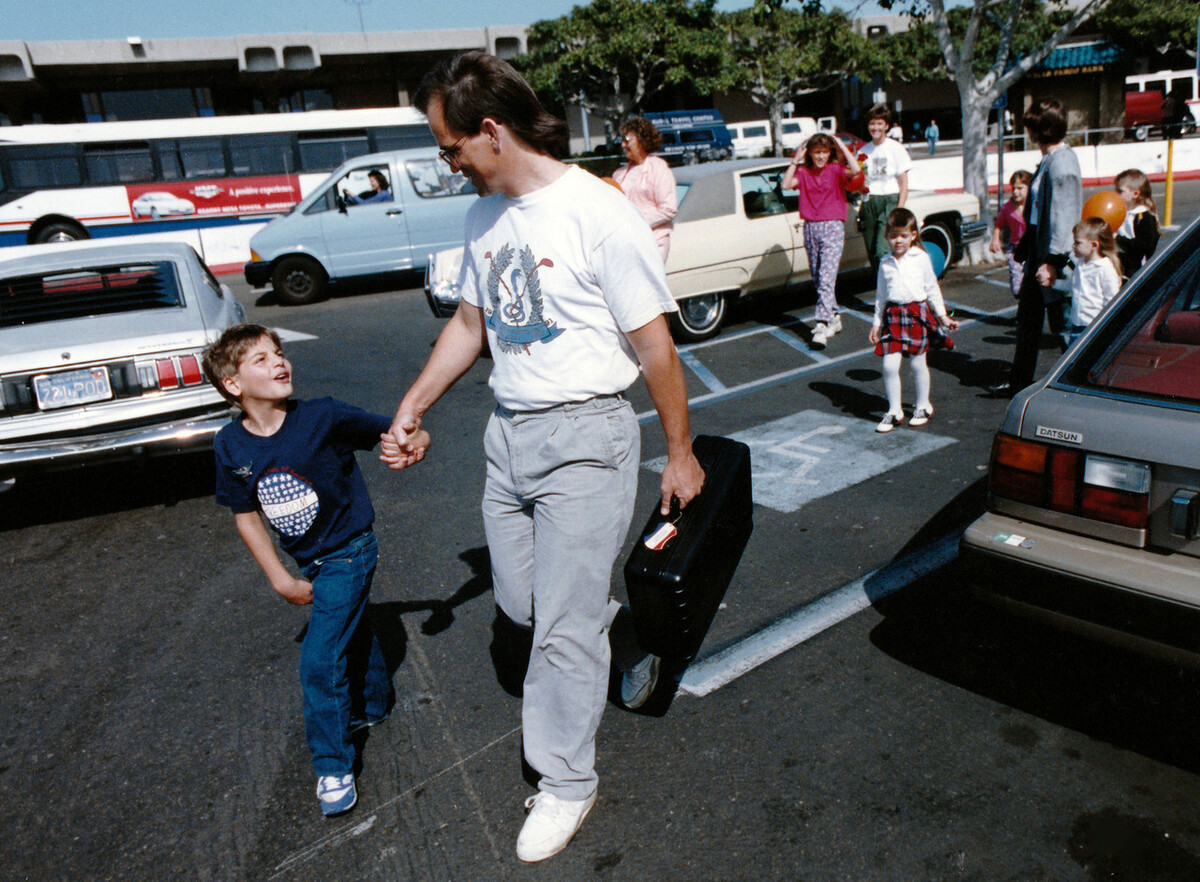 Izidor with his adoptive father on first arriving in San Diego from Romania.

And those feelings became increasingly intense. "I felt angry to a point where I could feel my heart is turning black," Ruckel says. "And at the same time I have been raised in a Christian home. And you know with my Christian faith I always wondered, am I a child from hell? What went wrong with me?"

Scientists can't answer that question for Ruckel or any other individual. But they now know that, as a group, neglected or abandoned children tend to have abnormal circuitry in areas of the brain involved in parental bonding.

When typical children are shown pictures of their mothers, the response in the amygdala, a brain region that plays an important role in emotional reactions, is much greater than when they see a stranger, according to Nim Tottenham. She's an an associate professor of psychology at the University of California, Los Angeles.

Her team repeated the experiment with children who had been adopted after spending time in an orphanage or some other institution. This time, the children saw pictures of either an unfamiliar woman or their adoptive mother. And "the amygdala signal was not discriminating Mom from strangers," Tottenham says.

This sort of brain adaptation may help children survive in an environment without parents, she says. But it also may affect the kind of family relationships these children have once they are adopted.

Tottenham, who is a parent herself, says all the research on neglected children reminds her of something that should be obvious: "Parents are playing a really big role in shaping children's brain development." And parenting, she says, is a bit like oxygen. It's easy to take for granted until you see someone who isn't getting enough.

Children who are adopted by about age 2 are most likely to grow up with typical brains, researchers say. Other neglected children, though, often show remarkable recoveries. 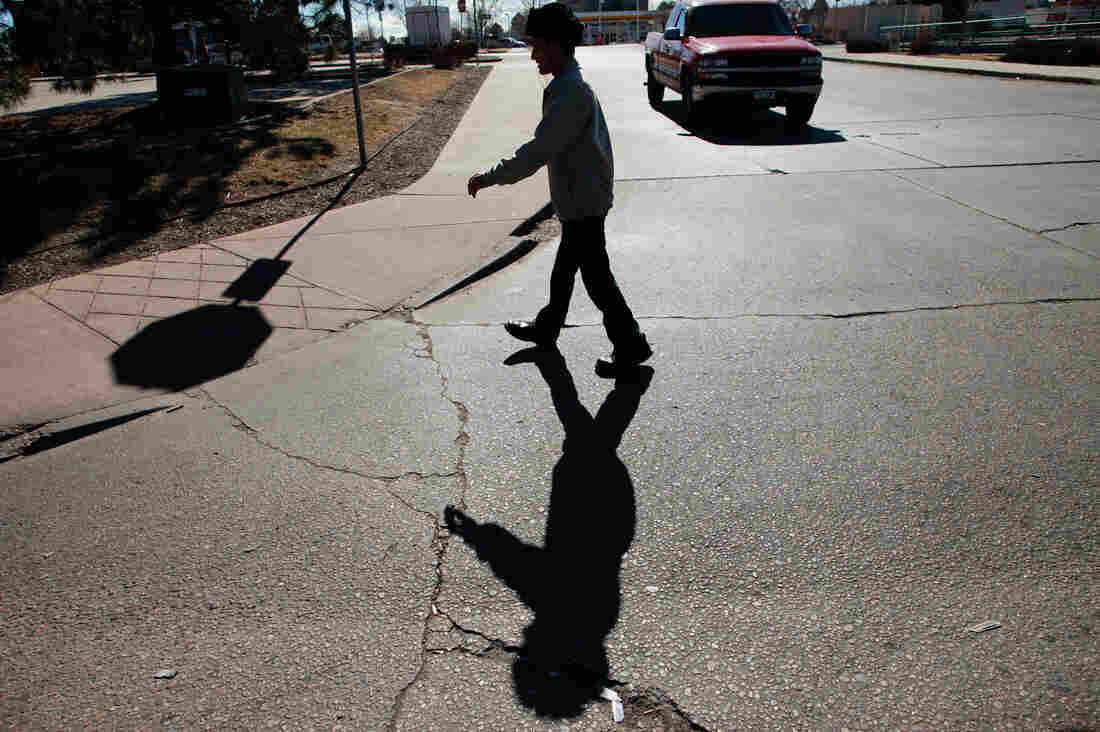 "I've become an advocate fighting for other orphans," Ruckel says. "And I believe that has everything to do with my parents, because I realized what love, what compassion, what affection can do." Barry Gutierrez for NPR hide caption 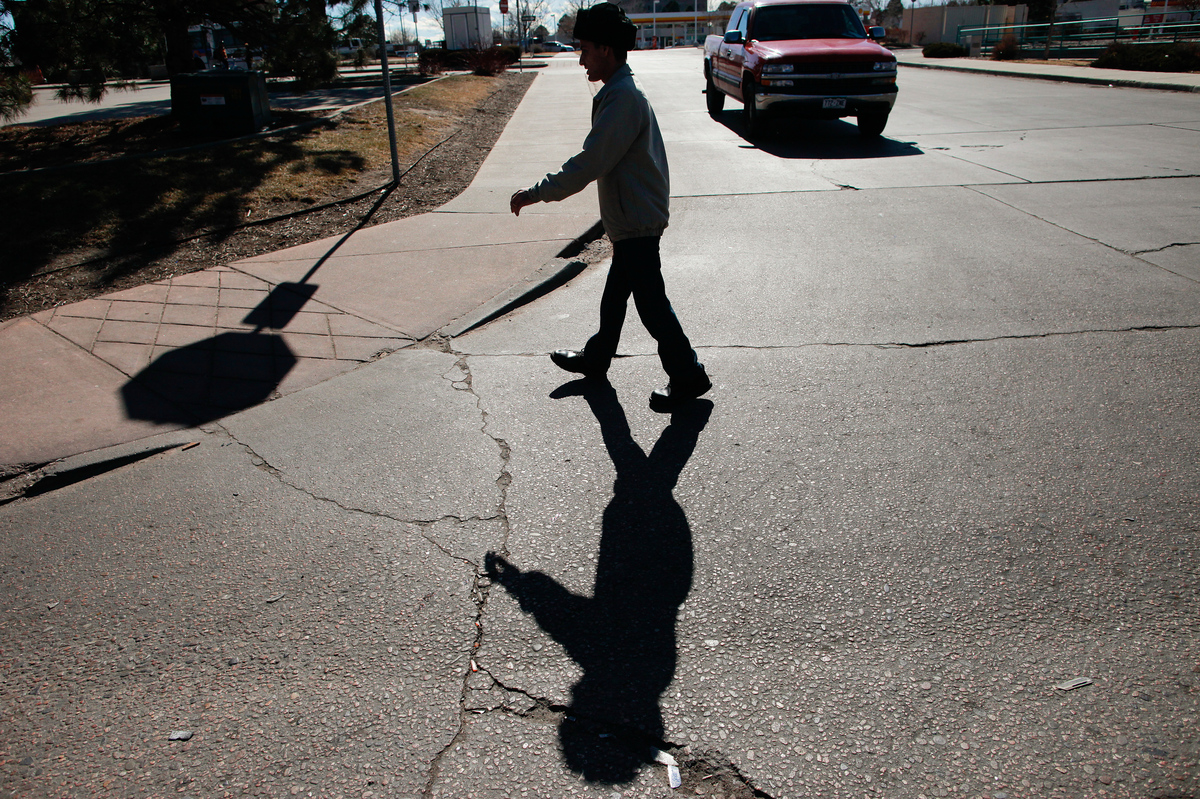 "I've become an advocate fighting for other orphans," Ruckel says. "And I believe that has everything to do with my parents, because I realized what love, what compassion, what affection can do."

Things turned out pretty well for Izidor Ruckel. After leaving home at age 17 and being out of touch with his adoptive parents for several years, he learned that his family had been in a serious car crash. He realized he couldn't just leave them there. So he went to the hospital.

"It was really hard because I wanted to make sure they were OK," he says. "I was scared. And I didn't think I was going to be forgiven for everything I'd put them through."

But they did forgive him. And since then, he says, he and his adoptive parents have become very close.

That may be possible because his brain has changed, Ruckel says. "I believe that even the brain cells that don't work as a child, I believe that they can develop as a grown man."

Scientists have their own version of that idea. They say the brain has a remarkable ability to rewire itself and compensate for things that go wrong during development, including some problems caused by neglect.

Ruckel is 33 now and lives in Denver. In addition to writing a book about his experiences, he produced a documentary on Romanian orphans who were adopted. And he's raising money for a second documentary about what happened to the orphans who stayed in Romania.

"I've become an advocate fighting for other orphans," Ruckel says. "And I believe that has everything to do with my parents, because I realized what love, what compassion, what affection can do."