Accessibility links
New At The Pediatrician's: Cholesterol Tests For 9-Year-Olds : Shots - Health News The annual well-child visit should be about a lot more than getting shots, doctors say. New guidelines for checkups include screening tools for depression and substance abuse starting at age 11. 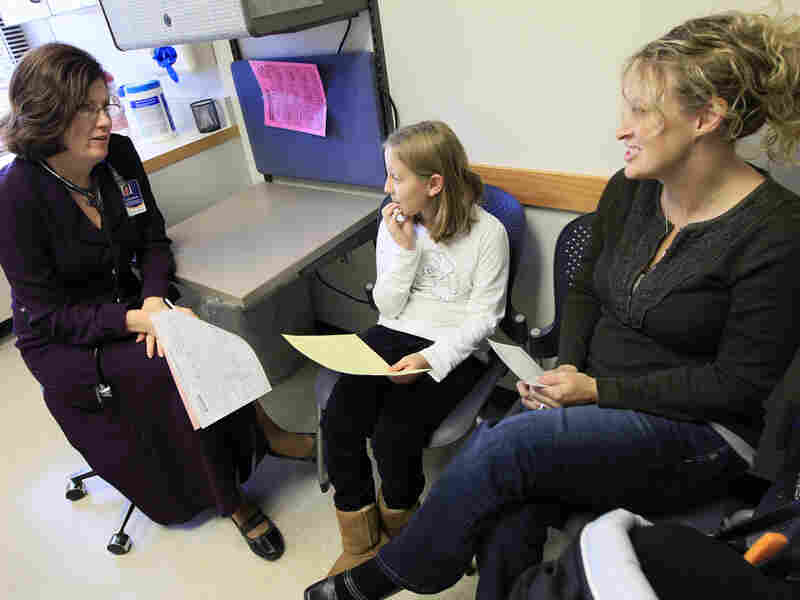 Joscelyn Benninghoff, 10, goes over the results of her cholesterol test with her mother Elizabeth Duruz (right) and Dr. Elaine Urbina at Cincinnati Children's Hospital in 2011. Al Behrman/AP hide caption

The yearly pediatrician's visit can seem like the same old thing: height, weight, shots. But the rules for well child visits are changing, and the nation's pediatricians want to make sure that parents and doctors are up to speed on the changes.

Children should get a cholesterol test between the ages of 9 and 11, according to guidelines published Monday by the American Academy of Pediatrics. Teenagers should get tests for HIV, the virus that causes AIDS, between 16 and 18. And newborns need to have their blood oxygen levels checked before they leave the hospital, to make sure they don't have a hidden heart defect that could cause big trouble later on.

To find out more about these and other changes, we talked to Dr. Geoffrey Simon, the chairman of the committee that wrote the new recommendations, and a pediatrician at Nemours duPont Pediatrics in Wilmington, Del. Here's an edited version of our conversation.

Why are you recommending that all children get tested for cholesterol by age 12? That seems awfully young.

Previously we looked at screening after age 2 if there was a family history or other risk factors, but you had to ask those questions. Back in 2012, the National Heart, Lung and Blood Institute put together these recommendations, that every kid in the 9-to-11 age group regardless of risk should get their cholesterol done.

The goal is to identify risk factors early on, so we reduce their heart disease risk as adults.

This reflects the current science and recommendations. But people haven't known this, which means that kids aren't being routinely checked. It has nothing to do with whether your kids are obese or not.

If a 10-year-old has high cholesterol, what happens next?

Usually we recommend lifestyle changes and watching diet. There's a small percentage of kids whose cholesterol is just through the roof. It's not that they're overweight; genetically they have this condition. The threshold for putting kids on medication like statins is actually pretty high.

You're also recommending screening for depression and substance abuse starting at age 11. Isn't this something pediatricians are doing already?

We're giving pediatricians tools for screening for substance abuse risk and for depression. Instead of trying to fumble through an interview to see if a child is depressed, here's a validated tool with questions to ask. You can do it in 10 to 15 seconds, and then focus on what the adolescent really needs, instead of talking about baseball or how things are going at school. You can cover what's really important for that patient right then and there.

The Centers for Disease Control and Prevention recommends that everyone get screened for HIV/AIDS, but they say start considering it at age 13. Why are the pediatricians saying 16 to 18?

We decided on the range of 16 to 18 based on where you are. Because of local privacy laws, sometimes you can't give results confidentially to patients under 18. Or the lab test shows up on the parents' bill. In some cases confidentiality may be really important to the patient.

What's the parent's role in all these changes?

Speaking of that, the pediatricians are also saying that retail clinics are "inappropriate" for children's primary medical care. That sounds a lot like you're saying don't use the competition. Why not?

We found that for adults retail clinics are not a bad recourse, but there wasn't data on outcomes for pediatric patients. What's concerning is that we're seeing all these ads, "Get your sports physical done for 10 bucks, 20 bucks." We're finding that parents are using that instead of the visit when they get all the preventive services.

It's OK to go to Jiffy Lube to get your oil changed, but you don't want to get your timing belt changed there. It's not the same as a full tuneup. It's not a replacement for the medical home.

We do think that children need access to care when they're sick. If the retail clinic is the best option and the least expensive, that's much better than going to the emergency room.

Those visits should be communicated back to the pediatrician so if there are problems we can follow up. We really want to have these groups reach out and be collaborative, so we're all operating in the best interests of the child.