Accessibility links
For Those Unable To Talk, A Machine That Speaks Their Voice : Shots - Health News Most people diagnosed with the devastating Lou Gehrig's disease will lose their ability to speak. But one man in Washington state recorded his own voice onto a machine that will one day talk for him. 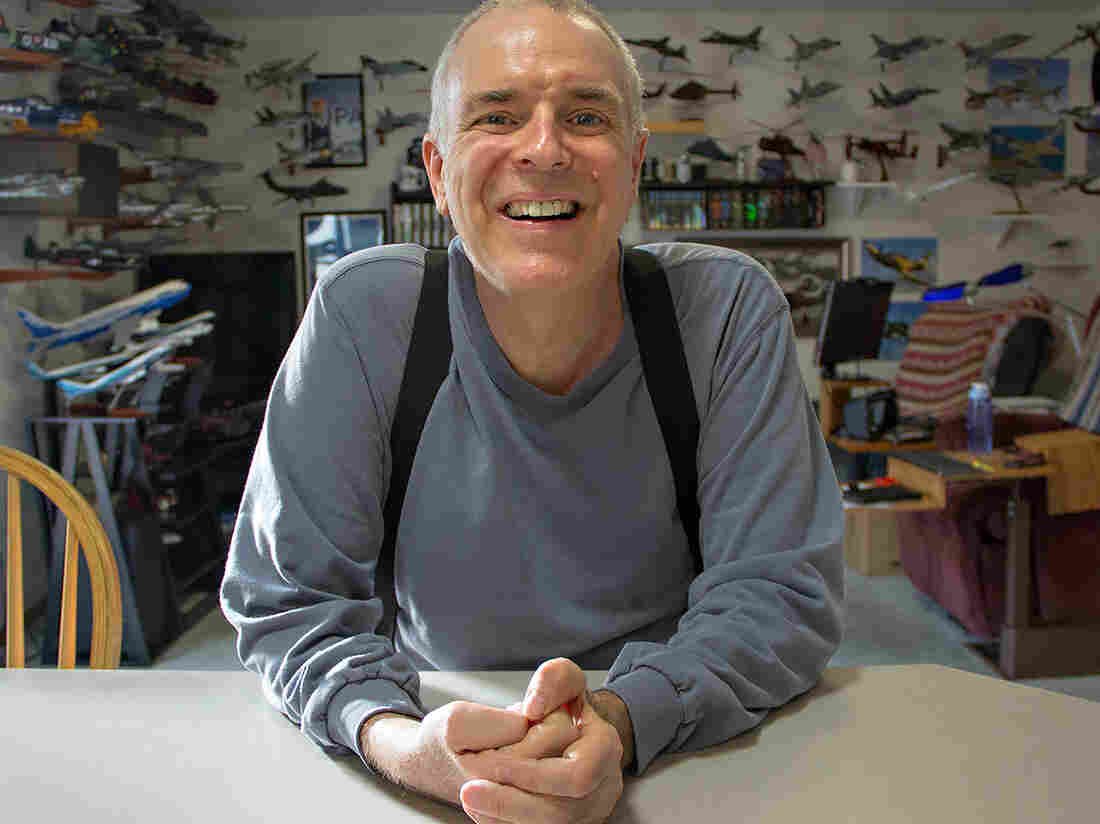 Carl Moore, a former helicopter mechanic, was diagnosed with ALS 20 years ago. He has had unusual longevity for someone with ALS but expects someday to rely on his wheelchair and speech-generating device. Justin Steyer/KPLU hide caption 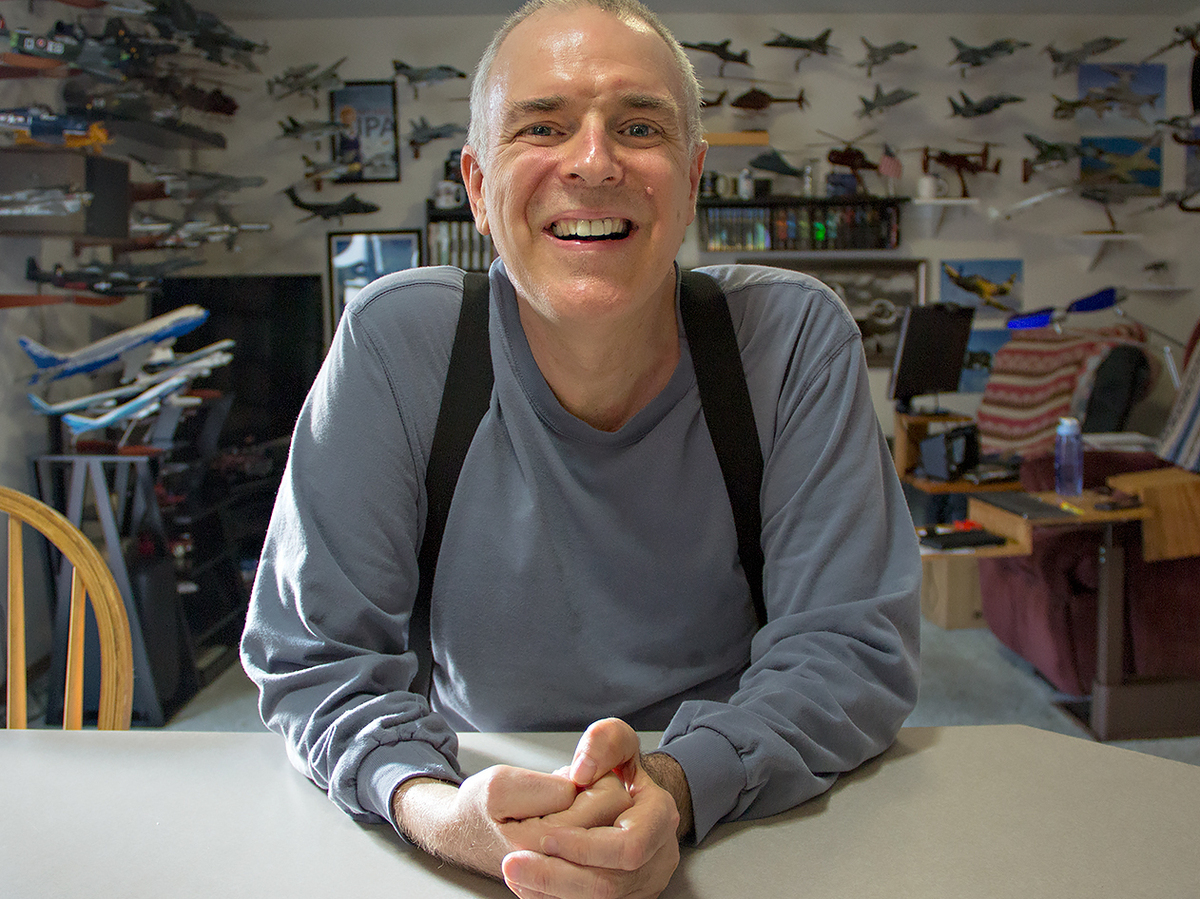 Carl Moore, a former helicopter mechanic, was diagnosed with ALS 20 years ago. He has had unusual longevity for someone with ALS but expects someday to rely on his wheelchair and speech-generating device.

It's hard to imagine a more devastating diagnosis than ALS, also called Lou Gehrig's disease. For most people, it means their nervous system is going to deteriorate until their body is completely immobile. That also means they'll lose their ability to speak.

So Carl Moore of Kent, Wash., worked with a speech pathologist to record his own voice to use later — when he can no longer talk on his own.

Most ALS patients live only a few years after diagnosis, but Moore, a former helicopter mechanic, is the exception — he was diagnosed 20 years ago. At the beginning, he lost use of his hands, and it wasn't until years later that he found that the symptoms were affecting his speech. 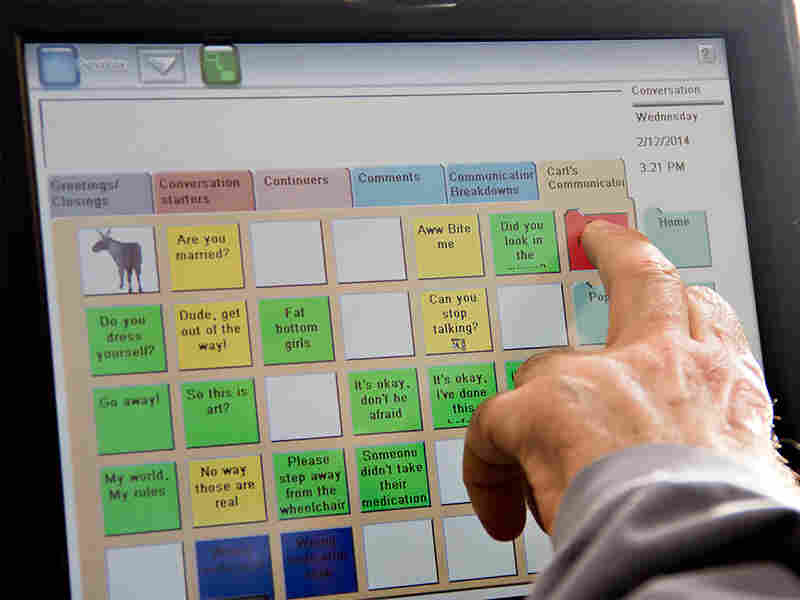 Carl Moore shows some of the phrases he's recorded in his own voice and stored on his speech-generating device. Justin Steyer/KPLU hide caption 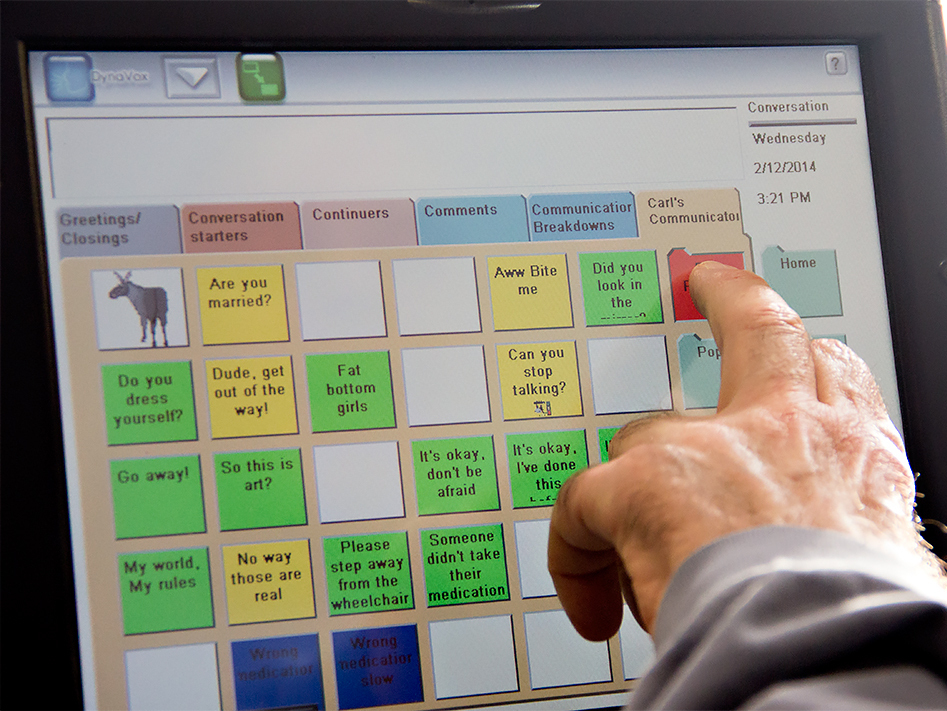 Carl Moore shows some of the phrases he's recorded in his own voice and stored on his speech-generating device.

"You can hear my three-shots-of-tequila speech," he says. "And it does get worse as I get tired."

So several years ago, before that slur crept in, he recorded hundreds of messages and uploaded them to the speech device he'll someday rely on. The machine looks like a chunky tablet computer, and it would normally sound like a robot. But now, instead, it will sound like Moore.

"It's almost like preserving a piece of yourself," he says. "I've taken auditory pictures of who I am."

Listen to some phrases from Carl Moore's voice bank.

Moore's banked messages range from the practical ("I feel tired") to the absurd ("You know what? Your driving sucks") and somewhere in the middle ("Hey, my butt itches. Would you give it a bit of a scratch?").

Moore is kind of a snarky guy — some of his messages can't be played in decent company. It's a part of his personality that he's rescuing from the disease.

And it's not just for his own benefit. Message banking also helps his caregiver: his wife, Merilyn.

"If it's a computer voice, I think it's harsh," she says, "whereas if it's his own voice, I can feel like he's actually speaking those words."

John Costello, a speech pathologist at Boston Children's Hospital, is credited with inventing the clinical use of voice banking. He says it can make a big difference in people's quality of life.

"If you wanted to say something like, 'You're the love of my life,' having that in synthetic speech is devastating," Costello says.

One patient's wife, he says, contacted him shortly after her husband's death. "She wrote to me that the work that we did was the only bright forward movement. Everything was about loss, except the possibility of communication."

New Voices For The Voiceless: Synthetic Speech Gets An Upgrade

The person helping Carl and Merilyn preserve that possibility is Roberta Kelley, a speech pathologist at Seattle's Virginia Mason Hospital. She says ALS is really a relentless march toward disability and death. But this lets people snatch something back from it.

"It gives the patient something to do when they have no control over the disease," she says.

Yet for all its benefits, in Kelley's clinic, only a fraction of patients actually do it.

"The ones that don't do it can't deal with it," she says. "They don't want to think about using an electronic piece of equipment to talk. So most of them nod, smile and do nothing."

Heartbreakingly, many come back hoping to record their voices after it's too late.

Carl, on the other hand, brings a mechanic's pragmatism to the project, and he's clearly having some fun too. Besides letting him razz Merilyn for years to come, the recordings will become an archive for her.

If you wanted to say something like, 'You're the love of my life,' having that in synthetic speech is devastating.

"I see this also as a legacy, which will feel like his presence with me even after he's gone," she says.

So Merilyn wants to make sure Carl has banked the really important things — which raises a question: Where, among the witty barbs and the practical lines, were the messages of tenderness, of intimacy?

"My conversations are mostly sarcastic," he says. "She asked me before we left if I had the phrase 'I love you,' and I realized I didn't."

He says he'll make more recordings at some point — sooner rather than later. The trouble, he says, is his voice has already gone downhill.

"We'll see how it works out. I'm not comfortable with recording my voice as it is," he says.

Later, Carl dug back through his hard drive and discovered that he had, indeed, recorded himself saying "I love you." He added it to the device that will someday speak for him.