Accessibility links
Palliative Chemo Can Make It More Likely You'll Die In The ICU : Shots - Health News No one wants to die in the hospital, hooked to a ventilator. But undergoing chemotherapy just to ease symptoms or to buy a bit more time increases that likelihood for patients with terminal cancer. 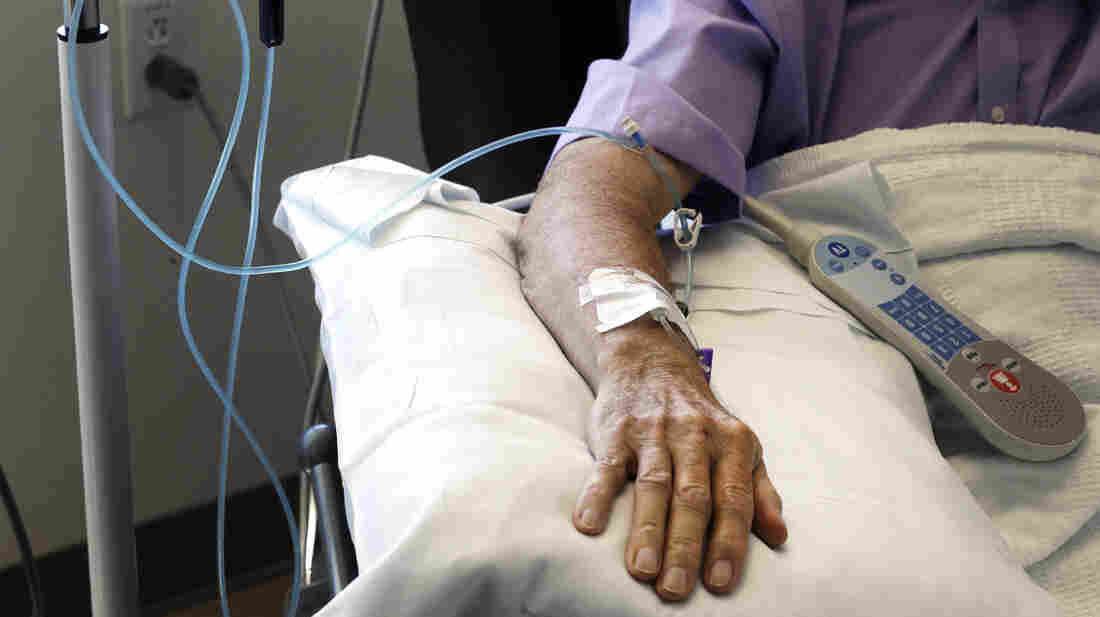 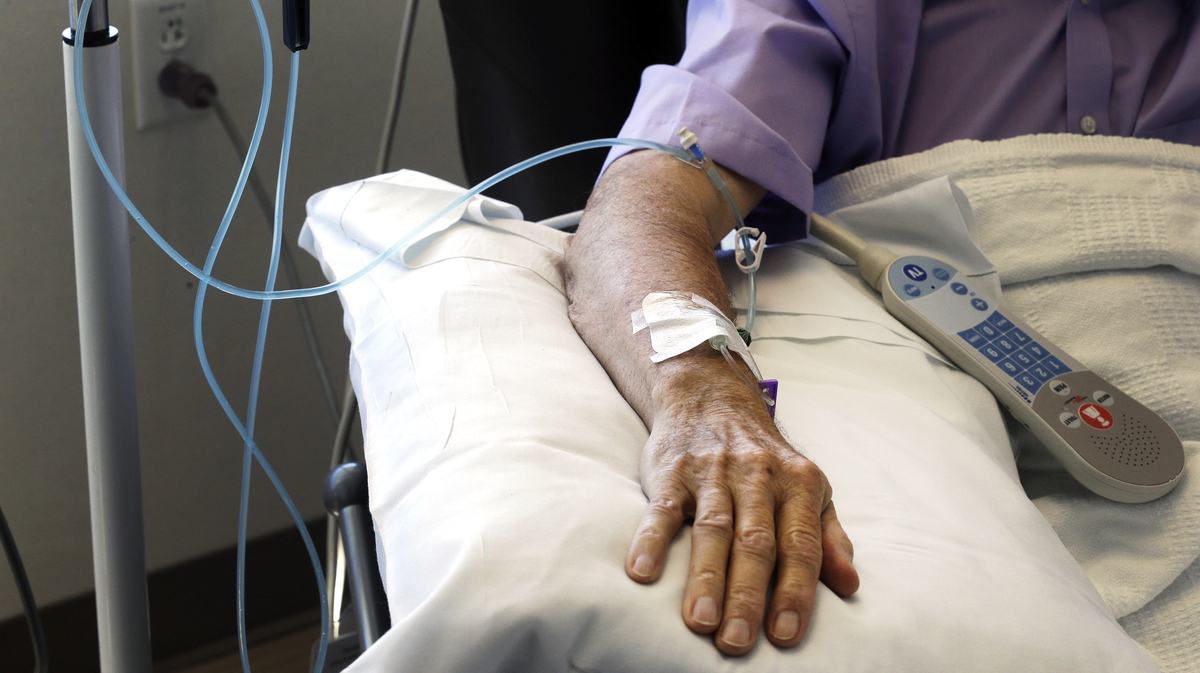 Chemotherapy is administered to a patient at Duke Cancer Center in Durham, N.C.

Cancer patients who get chemotherapy in the last months of their lives are more likely to die in the intensive care unit, rather than where they wish, a study finds.

And with more than half of all people with incurable cancer getting palliative chemotherapy in the months before they die, many people could be suffering more than needed.

Palliative chemotherapy is used to control symptoms and, perhaps, buy a patient a bit more time, once it's clear the person will likely die from the cancer.

But this study, which involved 386 patients at eight academic medical centers, found that chemotherapy may be interfering with other important aspects of care in those final weeks.

People getting palliative chemo were more likely to be given CPR or be put on a ventilator in the last week of life. And 11 percent died in an ICU, compared to 2 percent of patients who didn't get the chemo.

Chemo patients were less likely to die at home, with only 65 percent dying in their preferred place, compared to 80 percent of other patients.

"I didn't expect to see such a powerful association," says Dr. Alexi Wright, the lead author of the study, "because we give chemotherapy so frequently. I honestly, as an oncologist, was somewhat skeptical."

But the study's percentages came out the same even when Wright and her colleagues accounted for things like how active the patients were and whether they'd discussed their end-of-life wishes with their doctors.

"The findings I took from this are not that it's wrong to give palliative chemotherapy," says Wright, an oncologist at Dana-Farber Cancer Institute in Boston. "It's not. It does help patients."

Instead, she says, the findings should send a message to doctors that they need to talk with patients about what they want the end of life to be like.

Earlier studies have found that 12 percent of patients get chemotherapy in their last two weeks of life — when it's almost certainly doing them no good.

In 2012, the American Society for Clinical Oncology listed chemotherapy at life's end as one of the top five treatments to avoid:

For patients with advanced solid-tumor cancers who are unlikely to benefit, do not provide unnecessary anticancer therapy, such as chemotherapy, but instead focus on symptom relief and [other types of] palliative care.

But oncologists have been reluctant to make that shift, Wright tells Shots.

"A decade ago, oncologists argued vehemently that you can do people harm by telling them that they are dying," Wright says. "I don't think that's where we are now. But realizing that and making that happen are two different things."

And patients may be reluctant, too. In this study, patients said they would continue chemo if it enabled them to live just one more week.

"The take-home message is not that palliative chemotherapy is futile, but that it has the potential to be ineffective and potentially harmful, especially if we don't understand what patients want."