Accessibility links
Doctors Use 3-D Printing To Help A Baby Breathe : Shots - Health News Garrett Peterson was born with a defective windpipe and every day he struggled to breathe. Now, thanks to a 3-D printer, his windpipe has been strengthened and Garrett should soon breathe normally. 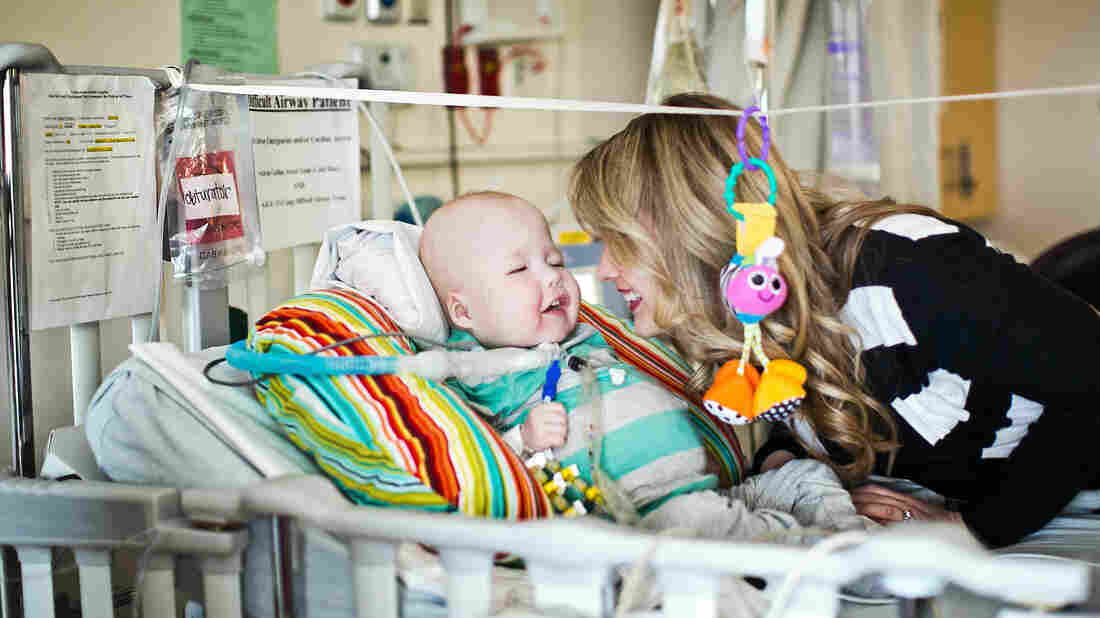 Garrett shares a moment with his mother, Natalie Peterson. "He has been doing so good," she says. "He's been smiling." Nicole Haley/University of Michigan Health System hide caption 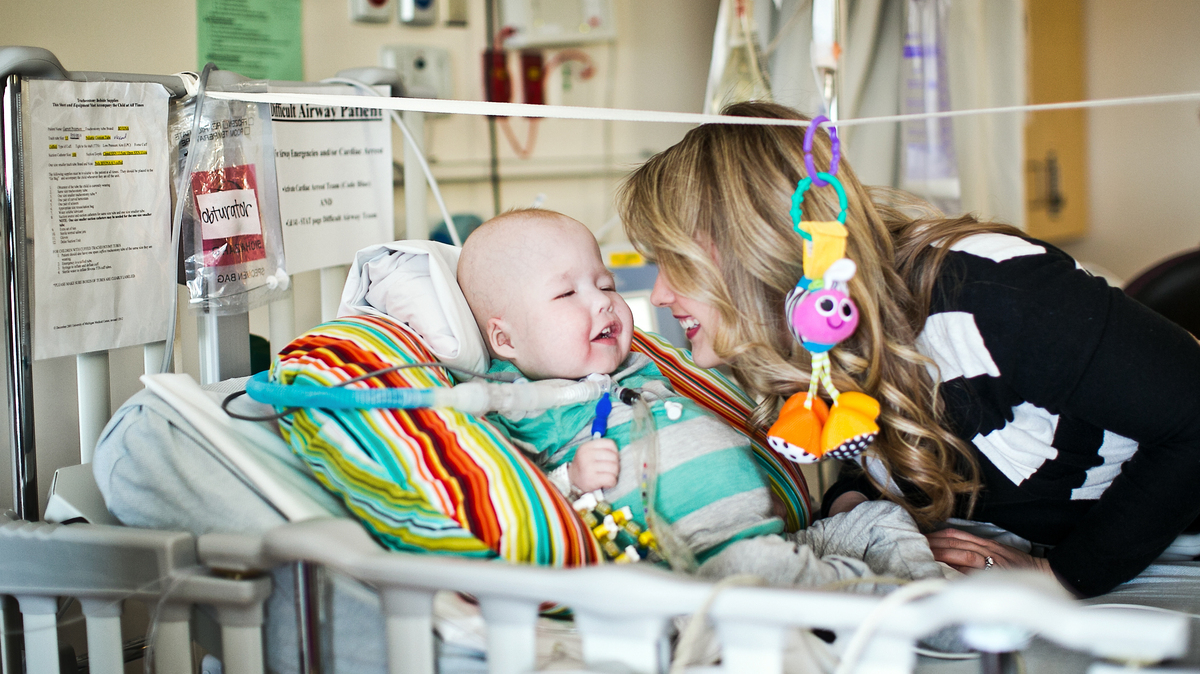 Garrett shares a moment with his mother, Natalie Peterson. "He has been doing so good," she says. "He's been smiling."

Ever since the day Garrett Peterson was born, his parents have had to watch him suddenly just stop breathing.

"He could go from being totally fine to turning blue sometimes — not even kidding — in 30 seconds," says Garrett's mother, Natalie Peterson, 25, of Layton, Utah. "It was so fast. It was really scary."

Garrett was born with a defective windpipe. His condition, known as tracheomalacia, left his trachea so weak the littlest thing makes it collapse, cutting off his ability to breathe.

"When he got upset, or even sometimes just with a diaper change, he would turn completely blue," his mother says, "and that was terrifying." 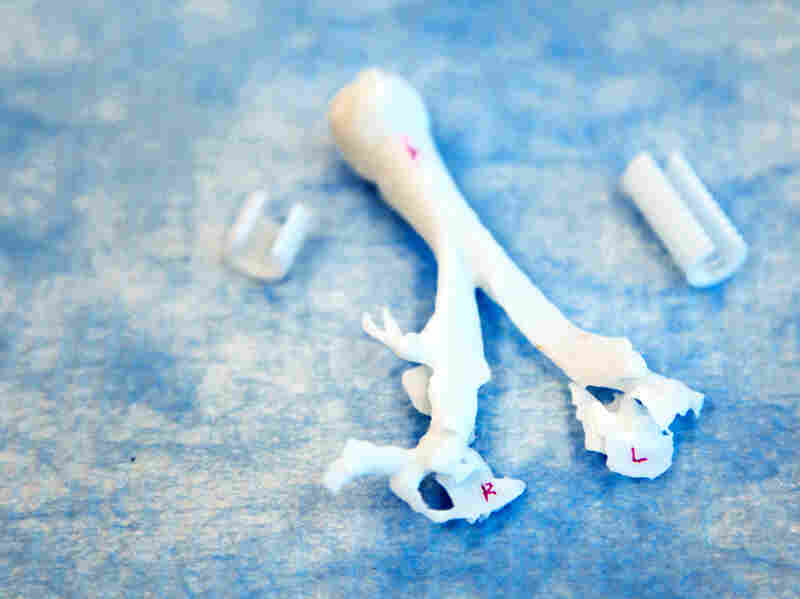 A model of Garrett's trachea, along with splints similar to those used in the operation. Juliet Fuller/University of Michigan Health System hide caption 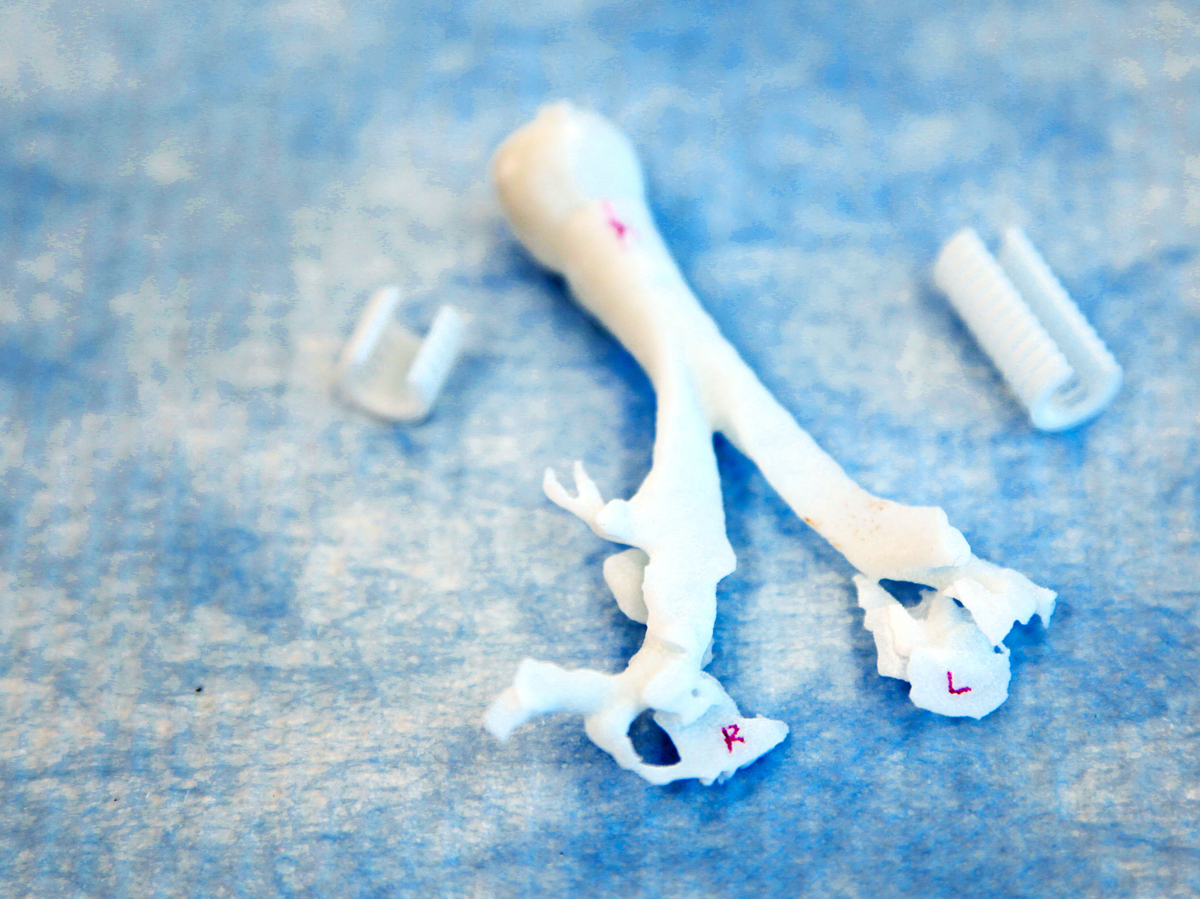 A model of Garrett's trachea, along with splints similar to those used in the operation.

So the Petersons contacted Dr. Glenn Green at the University of Michigan, who specializes in conditions like Garrett's. He teamed up with Scott Hollister, a biomedical engineer who runs the university's 3-D Printing Lab, to create a remarkable solution to Garrett's problem — a device that will hold open Garrett's windpipe until it's strong enough to work on its own.

Instead of shooting ink onto a flat page to print words or pictures, 3-D printers use other material, such as plastic or metal, to create three-dimensional objects.

"You build up layers until you have the complete 3-D structure," Hollister says.

3-D printers have been used to build jewelry, art and even guns. But Hollister is using the technology to create medical devices. He uses a 3-D printer that melts particles of plastic dust with a laser. He has already built a jawbone for a patient in Italy and has helped another baby with a condition similar to Garrett's. But Garrett is a lot of sicker and his condition is a lot more complicated.

"It's just been issue after issue with breathing, and just trying to keep him breathing at all," Jake Peterson, Garrett's dad, says.

At 16 months old, Garrett had never been able to leave the hospital. Every time he stopped breathing, it was a mad rush to save him. And the doctors weren't sure how much longer they could keep him alive.

"In some sense we were thrown directly into the fire," Hollister says. "We characterized it as sort of a Hail Mary pass." 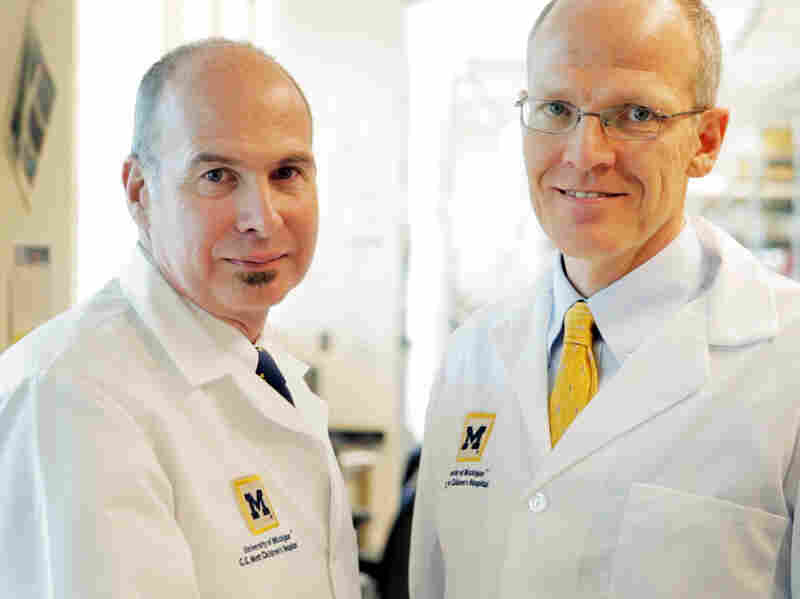 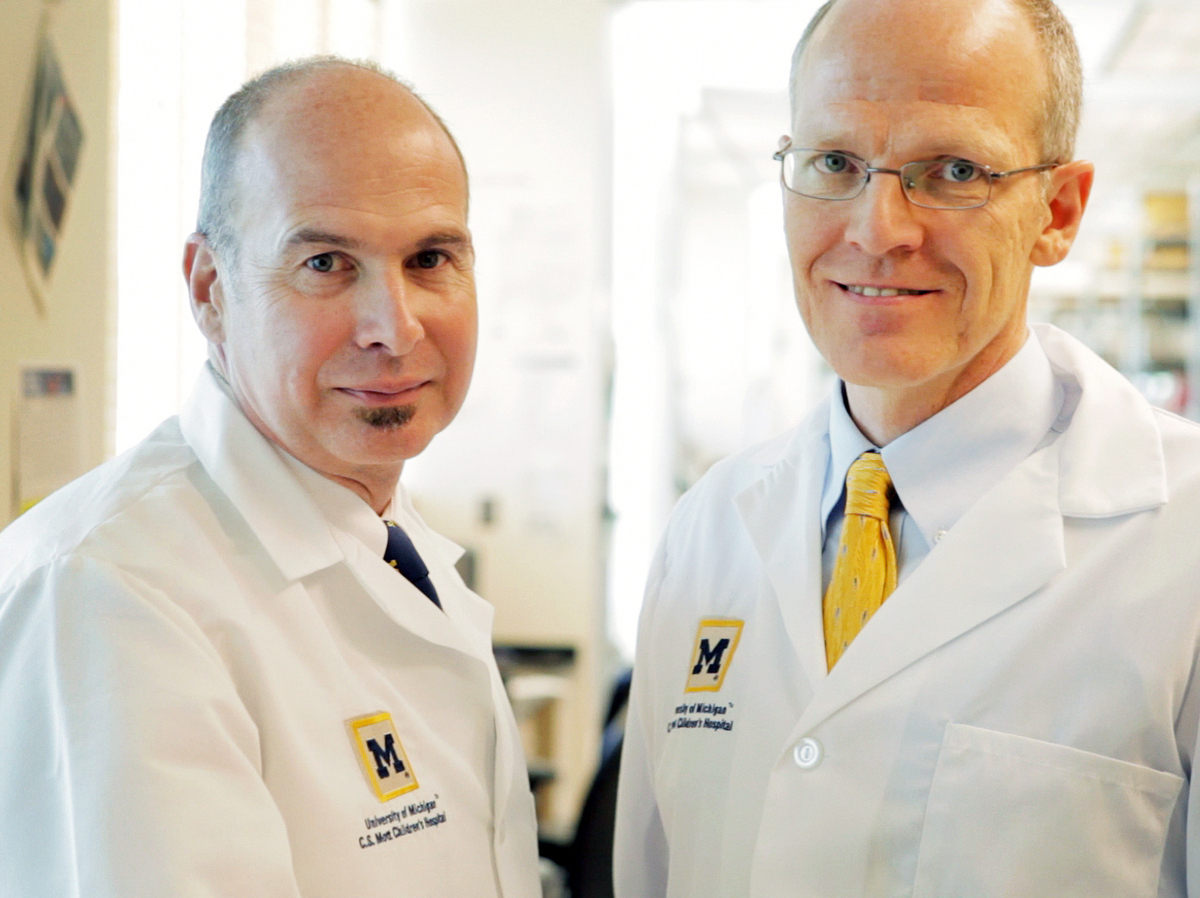 Scott Hollister, a biomedical engineer at the University of Michigan, and Dr. Glenn Green, a specialist in pediatric otolaryngology, teamed up on Garrett's case.

So they rushed Garrett from Salt Lake City to Ann Arbor on Jan. 18 and got to work.

"It's like a protective shell that goes on the outside of the windpipe and it allows the windpipe to be tacked to the inside of that shell to open it up directly," Green says.

But the device has not been approved by the Food and Drug Administration. So Green and Hollister had to convince the agency to give them an emergency waiver to try it. And they were running out of time.

"His condition was critical. It was urgent and things needed to be done quickly. It was highly questionable whether he would survive and how long he would survive," Green says.

Garrett's parents knew they were taking a leap of faith. But they felt like they had to try.

"We were just so excited for that glimmer of hope that this could be what would help Garrett get home," Jake Peterson says.

Hollister and Green got the FDA's approval and scheduled the surgery for Jan. 31.

As soon as the surgeon, Dr. Richard Ohye, opened up Garrett's chest, he and Green could see that Garrett's windpipe had collapsed. One of his lungs was completely white.

"The only time I'd seen a white lung was in somebody that had died," Green says.

They quickly got to work, gingerly placing the first of two splints on one side of Garrett's windpipe. It fit perfectly. So they got started on a second splint, which fit perfectly, too.

After more than eight hours, both splints were securely in place. Then came the most important moment: What would happen when they let air flow through Garrett's windpipe into his lungs?

"That was just amazing to me," Green says. "Here something that we'd worked on, that had been constructed just a week ago to match this defect. It had worked just the way we had hoped. I said, 'This is going to change this boy's life and his family's life forever.' "

Garrett is 18 months old now and is still in the hospital, but in the weeks since the surgery, he has gotten stronger and stronger and needs less help breathing. His parents are ecstatic.

"He has been doing so good. He's been smiling, and it's crazy to be able to see him get really upset and not change colors," Natalie Peterson says. 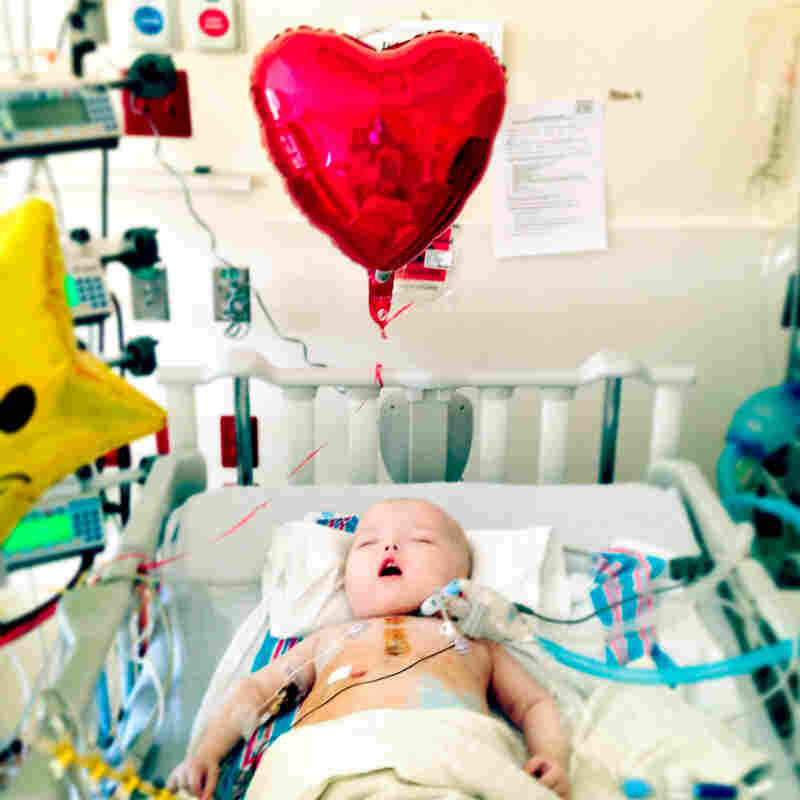 Garrett rests in his hospital bed on Valentine's Day, several weeks after his surgery. Courtesy of the Peterson family hide caption 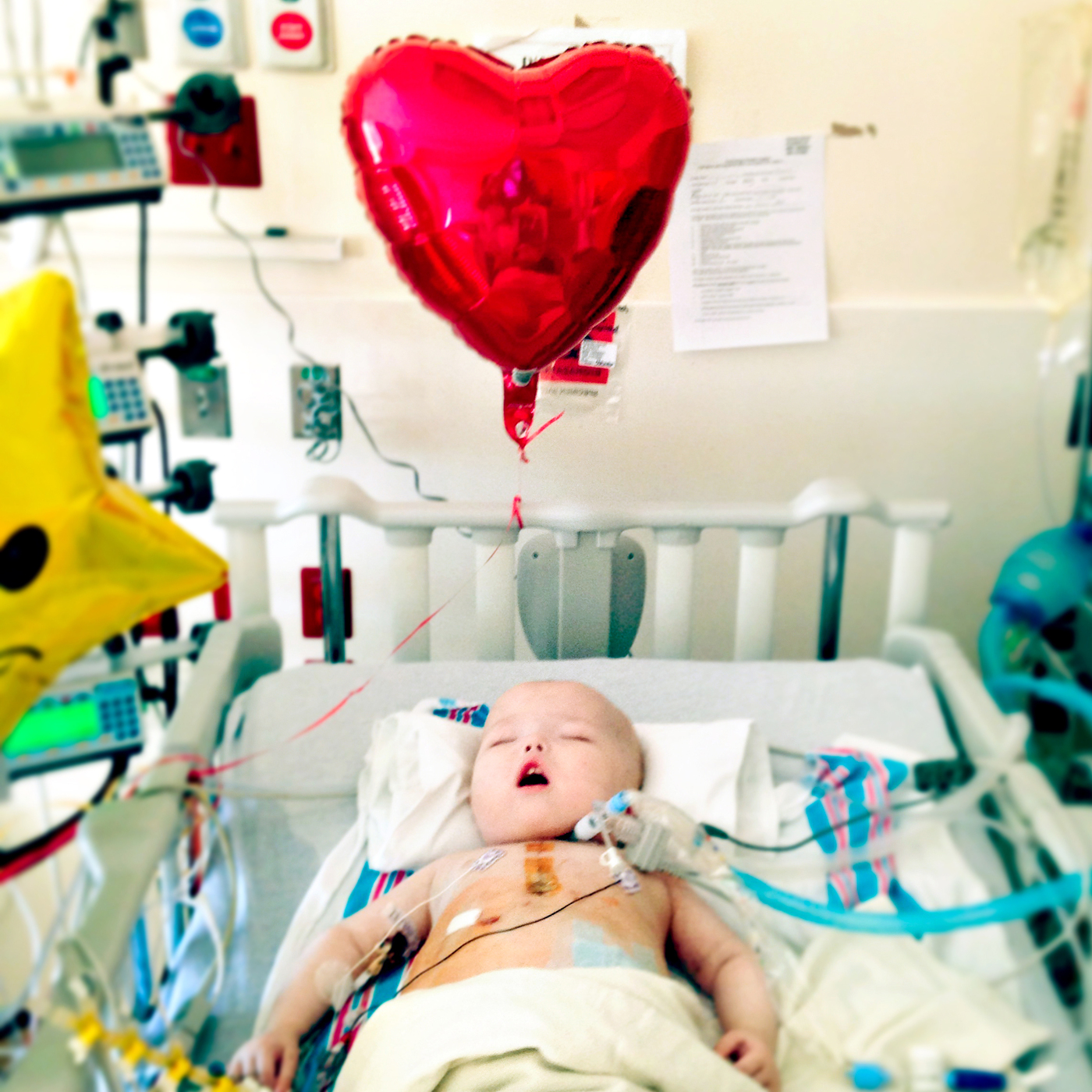 Garrett rests in his hospital bed on Valentine's Day, several weeks after his surgery.

Courtesy of the Peterson family

"He's being more interactive and more alert and reaching more for his toys. He's just starting to be more like a normal child," Jake Peterson adds.

Garrett's splint is designed to expand as he grows and eventually dissolve in his body as his own windpipe gets strong enough to work normally.

Green wants to save more babies this way, but it's expensive to transport these extremely sick children across country. It has also been hard to convince insurance companies to pay for the trip.

"It is one of the most frustrating things that I've been through, knowing that there's something that we have that can help and looking at all the roadblocks that are in place," Green says.

So he's hoping to launch a formal study, which may enable him to try more splints to save more babies.

Green says this is the most exciting thing he has seen since medical school. "We're talking about taking something like dust and converting it into body parts," he says. "And we're able to do things that were never possible before."