Accessibility links
Alzheimer's Diagnosis Expanding To Catch Early Warning Signs : Shots - Health News The approach would recognize changes in behavior and in the brain. Right now there are no treatments that slow down the disease, but identifying high-risk patients early on could help with prevention. 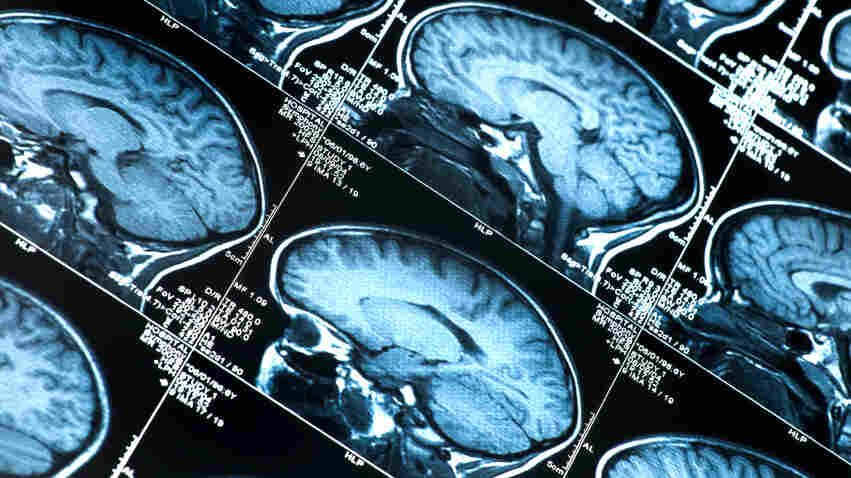 Doctors may eventually be able to diagnose "preclinical" Alzheimer's in patients who have abnormal brain scans but who aren't yet showing behavioral symptoms of the disease. iStockphoto hide caption

Alzheimer's disease isn't what it used to be. After 30 years of having doctors diagnose the disease by symptoms alone, researchers and advocacy groups are calling for new diagnostic criteria that recognize changes in the brain as well as changes in behavior.

The goal is to eventually allow doctors to diagnose "preclinical" Alzheimer's in patients who do not have problems with memory or thinking, but who do have an abnormal brain scan or some other sign that the disease may be developing.

More than 5 million Americans fall within the existing diagnostic criteria for Alzheimer's, according to the latest statistics from the Alzheimer's Association.

The current symptom-based diagnosis "is really a representation of a disease process that's been happening in the body for potentially 10 to 20 years," says Maria Carrillo, vice president of medical and scientific relations for the Alzheimer's Association. That process includes the accumulation of amyloid plaques or neurofibrillary tangles in the brain, and eventually the death of brain cells.

It's becoming possible to detect those signs of trouble using brain scans, tests of spinal fluid or blood, and other so-called biomarkers, Carrillo says. These markers "can tell us that underlying biology is really changing in the body before memory starts to change," she says.

"We haven't completely obliterated heart disease. But we've reduced risk by about 30 percent," Carrillo says. "We can do the same for Alzheimer's disease."

At the moment there aren't any treatments that slow down the disease. But that could change because of something known as the A4 study, says Reisa Sperling, principal investigator of the study and researcher at Brigham and Women's Hospital and Massachusetts General Hospital. "The study will test whether or not we can slow the earliest cognitive changes that people experience years before they get to the stage of dementia," says Sperling.

The A4 study, which has just started enrollment, will involve more than 60 sites around the country and about 1,000 patients. The participants can't have symptoms of Alzheimer's when they enter the study but must have brain scans showing a buildup of amyloid plaque. Some of the participants will receive an experimental drug that helps clear amyloid from the brain.

This drug, like several others, failed to help people in the later stages of Alzheimer's. But the drug appeared to slow cognitive decline in people who started taking it when they still had only mild symptoms. If it does the same thing for people who haven't developed symptoms, Sperling says, "We'd make a huge dent in preventing dementia."

It will take about five years to know whether the drug is working. In the meantime, it's important to begin identifying people with preclinical Alzheimer's, Sperling says. That approach paid off in diseases like diabetes and HIV, where screening tests came along well before good treatments were available, she says.

With Alzheimer's, better biomarker tests and effective treatments may arrive at nearly the same time. "It's a race," Sperling says. "We need to develop these screening tests and the biomarkers simultaneously with working on these clinical trials, so that if we succeed, we're prepared for how we would go about screening individuals to receive those treatments."

Millions of people in the U.S. could potentially benefit from a drug that prevents or delays Alzheimer's. About 30 percent of people older than 65 have amyloid plaque building up in their brains, Sperling says.