Accessibility links
Why Cholera Persists In Haiti Despite An Abundance Of Aid : Shots - Health News The deadly bacteria continue to sicken and kill people in Haiti. And the epidemic won't stop until the country provides basic sanitation. Many Haitians still don't even have latrines. 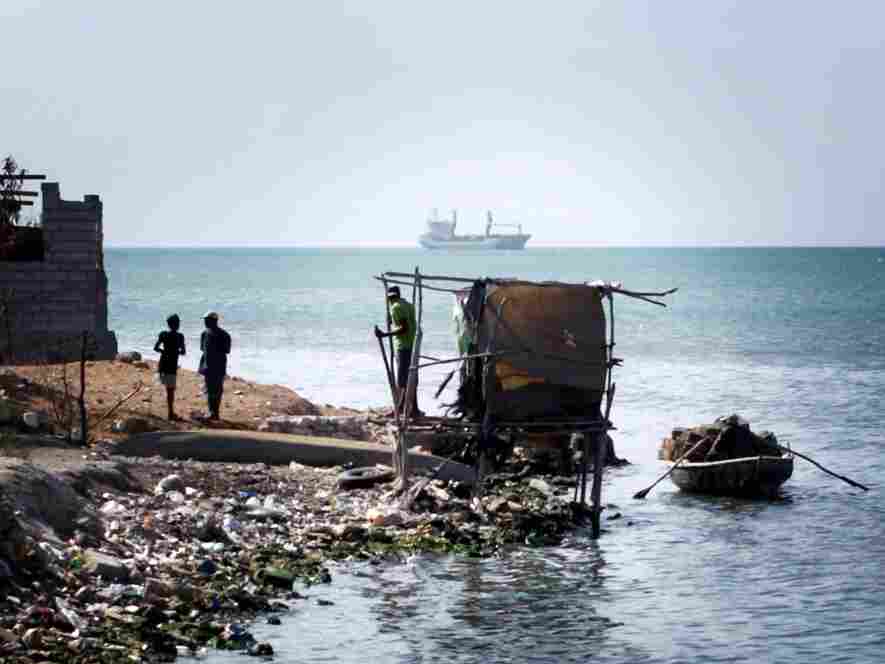 A makeshift latrine hangs over the water at the edge of Cite de Dieu, a slum in Port-au-Prince, Haiti. John W. Poole / NPR hide caption

It's been more than three years since cholera struck Haiti. And the epidemic continues today.

The deadly bacteria have killed more than 8,500 people and infected hundreds of thousands.

Why has the outbreak been so hard to stop, even with more than $9 million in foreign aid pledged to Haiti?

Lack of sanitation, says journalist Jonathan Katz, who has been covering the cholera epidemic since it began.

Wasting Away: An Earth Day Look At Living Among Garbage

Haiti doesn't have sewers. Instead, the country relies on what's known as the bayakou: independent, and somewhat secretive, laborers who clean the cesspools under people's latrines.

"Almost all of them are men ... and they work in a very interesting way," Katz says. "The job is done by hand. They climb into the latrines with a bucket. They scoop out the excrement and put it somewhere else."

"The job is incredibly important," he says, "It's basically the only way that people who have underground cesspools — dug under latrines in their backyard — get them clean."

But even a latrine is a luxury in Haiti.

And when those choices aren't available, people use an even less sanitary method: the so-called flying toilet.

"You take a plastic bag. You go in the plastic bag. And then you throw it," Katz says. "That's the way the sanitation tends to get done."

After the 2010 earthquake, foreign aid flooded into Haiti. And a major concern was getting clean water and temporary toilets into the country. But nothing has been done to solve Haiti's water and sanitation problems permanently, Katz says.

"There were very, very short-term, Band-Aid type solutions," he says. "For instance, the bladders of water provided to the displacement camps and the porta-potties being installed in big, visible places. They weren't long-term, durable solutions."

And sanitation problems are what kicked off the cholera outbreak in the first place.

Evidence suggests the cholera in Haiti came from a United Nations base where Nepalese peacekeeping troops were living. The cholera strain in Haiti exactly matches one found at the U.N. base. And the sanitation on the base wasn't sufficient to prevent contamination of the adjacent river.

Haitian citizens recently brought a lawsuit against the U.N. They're seeking compensation for the spread of cholera.

"Before these lawsuits were brought forward, U.N. officials were trying to actively deny they were responsible," Katz says. "Since then, the science [supporting the connection] has been so overwhelming that the U.N. basically doesn't even take up the issue of whether it's responsible."

And once cholera establishes itself in a region, the infectious disease doesn't leave easily.

"It's very hard to get out of the environment," Katz says. "That said, there have been many places in the world that have dealt with horrific cholera epidemics over very long periods of time."

What was the solution? Sewers. "Build underground pipes," Katz says. "As long as people continue to drink water that is infected, cholera is going to be a major problem."