Accessibility links
How Being Ignored Helped A Woman Discover The Breast Cancer Gene : Shots - Health News Twenty years ago, many scientists didn't think that genes could cause diseases like cancer. The discovery of the BRCA gene for hereditary breast cancer changed that. Mary-Claire King tells how. 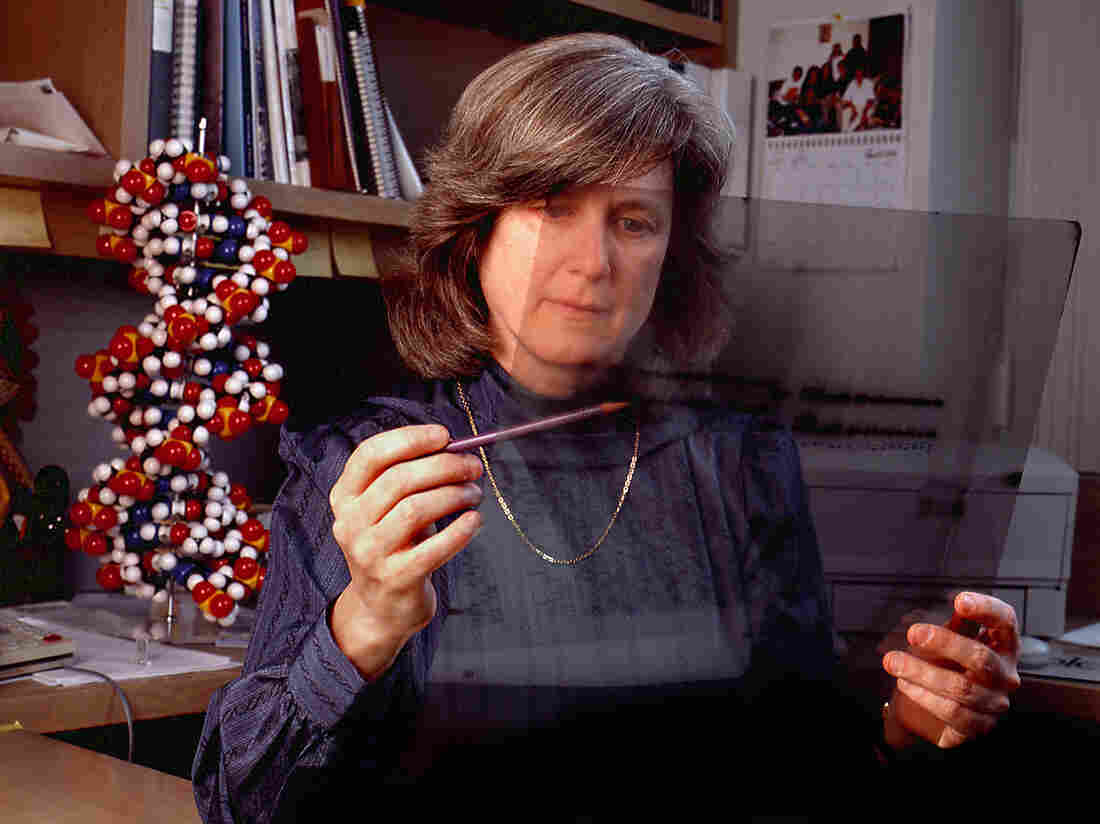 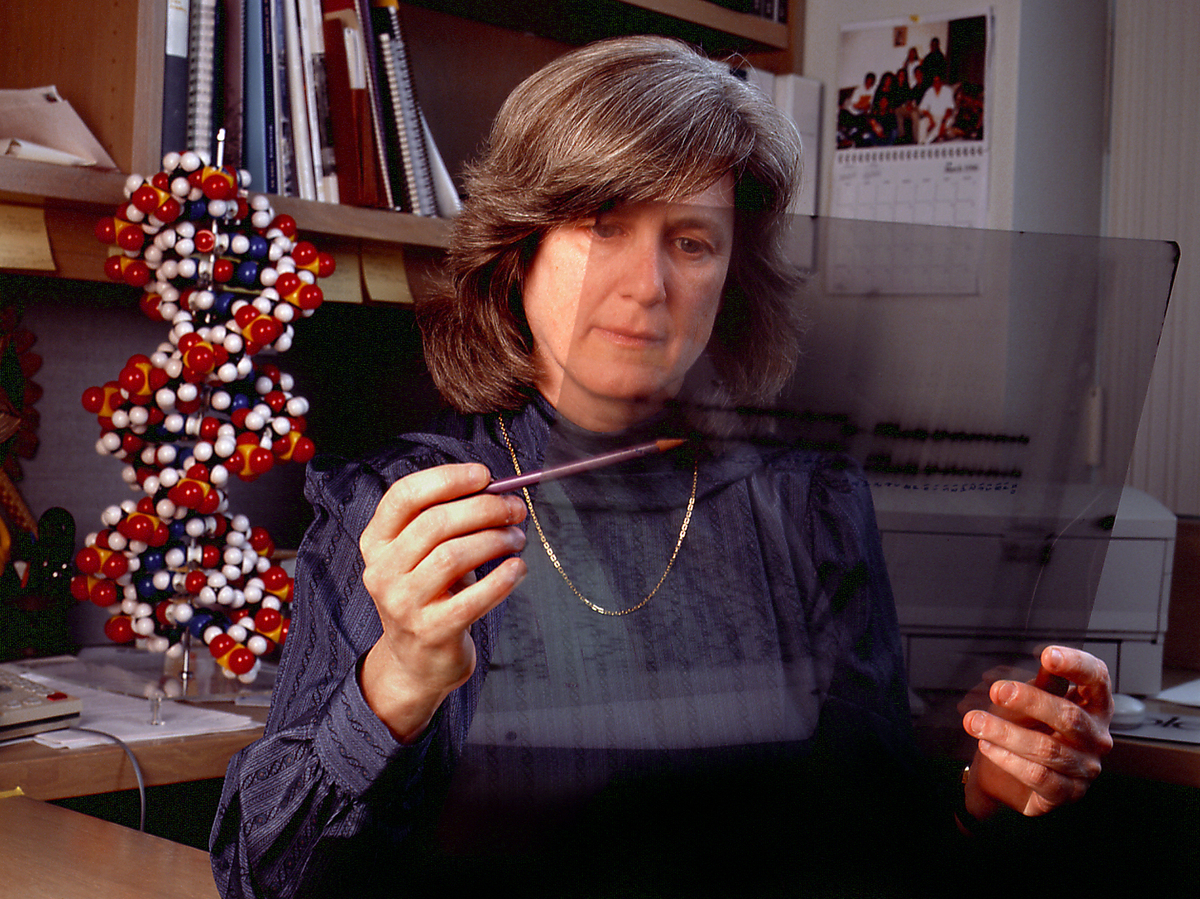 Back in the 1970s, a geneticist named Mary-Claire King decided she needed to figure out why women in some families were much more likely to get breast cancer.

It took 17 years for King and her colleague to identify the single gene that could cause both breast and ovarian cancer. During that time, many people discounted her work, saying that genes couldn't cause complex diseases like cancer. She proved them wrong by mapping the location of the gene she named BRCA1. In 1994, after an international "race" of four years among competing laboratories, the BRCA1 gene was successfully cloned. (King describes her experience in Thursday's issue of the journal Science.)

The discovery revolutionized genetics and cancer treatment. Simple genetic tests now let women know if they have mutations in their BRCA genes that increase cancer risk. They then can act on that knowledge, as actress Angelina Jolie did.

King, now a professor of genome science at the University of Washington, talked with NPR's Audie Cornish on Thursday about how she slowly but surely built evidence to prove that BRCA did indeed cause cancer. The conversation has been edited for length and clarity.

What triggered you to think that there would be this genetic link to cancer?

For breast cancer, there was very good evidence that some families were at high risk of the disease, but without an explanation why that could be true. In the absence of any other explanation I was driven to consider genetics.

How did you come up with the answer?

Our strategy was to use the idea of mapping a gene as an epistemological tool. We felt that we could prove the existence of a gene by showing where it was. And that's what we did. It took 17 years, from 1974 to 1990, but by 1990 we really had incontrovertible proof that there was a gene that lived on chromosome 17 in a particular physical locale.

Now this was all before the Human Genome Project, right? Now we take it for granted that there's this kind of easy mapping technology — if you want to find a gene in a chromosome just go look it up.

You're right — anyone can loop up a gene for free! It costs nothing and it takes 10 seconds on the Genome Browser. You're also absolutely right that the Human Genome Project had not yet begun when we began working on this project. The Human Genome Project and the effort to find BRCA1 were essentially born at the same time.

It seems like we're at a point now where we can do all kinds of mapping, we know about all these genes, but that doesn't necessarily make the decision any easier in terms of what kind of treatment you should do or what kind of risk prevention you should take. The science has outpaced the treatment.

A challenge we face as scientists, and a challenge our physician colleagues face, is how to interpret this very rapidly growing amount of information in a way that can best empower our patients. Our goal is to be able to inform women of genetic information that will lead them to make the best choices for themselves. We need to provide data that is complete and accurate. And we need to be able to do that inexpensively and effectively.

Over time, do you see that there has been too much emphasis on genes and genetic links and that that has that been to the detriment of other factors like environmental factors?

You've said in the past that as a woman doing this work there was a certain freedom in your research back in the 1970s when you were starting out; freedom in being ignored. In what way?

As a young scientist it can be liberating to not have expectations placed on you; if you can work quietly and if you can obtain funds for your work. And I could obtain modest funds for my work in the 1970s, and I could work in a way that allowed me the time and space to develop evidence until I was convinced of it. That's of course the highest bar — that you convince yourself that your evidence is good. Once you present your evidence then of course you're no longer being ignored. You're being attacked from all sides. Then you need to defend your evidence. But if you've had 17 years to develop your evidence then you're in a much better position to defend it well.

You've said you were a child of affirmative action. At that time did it really feel like not just that people were ignoring you, but they were dismissive of your work?

When one is a child of affirmative action one needs to anticipate that people, particularly those who didn't benefit from affirmative action, won't take you seriously for a while. But there's a wonderful phrase from Simone de Beauvoir: For a woman to be taken as seriously as a man she must be three times as effective. Happily this is not difficult.